James McAvoy as “The Beast” doesn't go over the top, he’s just going where other actors probably can’t go… 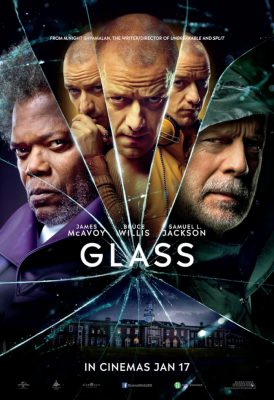 Apologies are due for what I intend to be a brief opening rant. Feel free to skip to the “Glass” subheading below, but for those otherwise inclined I would share an observation or two about the evils of going to the movies on a Saturday. As your favorite Doctor has mentioned in numerous movie reviews for the Tuesday Night Cigar Club, I prefer to visit the local suburban cinema for Tuesday or Wednesday matinees with showtimes that fall somewhere between 4:00 pm and 5:30 pm. My main reason for doing so is that, other than baseball games, I prefer to avoid gatherings of ten or more individuals. I once attended a Saturday afternoon show – if memory serves, it was the first Insidious movie, circa 2010 – at a squalid flophouse overcrowded with noisy adolescents whose parents were using the movie theater as a de facto babysitter. Never again, said I. Once I realized that I could embark from my laboratory during certain low-volume periods to view weekday matinees where there are no lines and never more than ten other people in a theater, I decided that only a fool would ever attempt to do otherwise. I saw the horror movie It Follows on a Tuesday afternoon with two other people in attendance. For the latest Halloween movie, witnessed on an uncharacteristic Monday afternoon, there were maybe a baker’s dozen in attendance. And these are just a couple of examples. When one wishes to truly capture the essence of the theater going experience, there is simply no better alternative to the weekday matiness. This is also beneficial when one is prone to bringing airplane minis of liquor into the theater for the purposes of mind enhancement. If The Doctor has an entire aisle to himself, then I am in no danger of a religious puritan witnessing me while I mix my Bombay Gin into my paper cup of Sprite. I also do not have to cope with the various assholes that stanch the flow of paying customers by attempting to purchase seven tickets for a show with Monopoly money or shout out loud for all to hear “I could make this candy faster than you guys are able to sell it to me!” and thinks that he is some sort of witty, public hero to the others trying to buy concessions. Unfortunately, it was a cold, dreary Saturday afternoon, and so I went along with my dad to a 12:50 pm show and dealt with all the above. Oh well, I suppose that once every five years isn’t a bad ratio. Seriously, what is wrong with people these days? Anyway, I am now safely ensconced back in my quarters with a tall can of Steel Reserve on the end table, so without my causing further delays to engage in additional bitching, let us get to the movie.

During the latter stages of M. Night Shyamalan’s Split we learn that the film takes place within the same “movie universe” as that of Unbreakable, the wonderful suspense film starring Bruce Willis and Samuel L. Jackson that was released back in the year 2000 (Blessed Jesus, has it really been that long? I guess it has. Holy shit.). One finds it difficult to imagine that M. Night had envisioned an eventual trilogy back in the late nineties, but rather he recognized an enticing opportunity to meld the respective universes of Unbreakable and Split together. The result, of course, is the recently released Glass starring James McAvoy, Willis, and Jackson all reprising their roles from the previous films. Unbreakable is a personal favorite of The Doctor; in my opinion it’s much better – and apparently more lasting – then The Sixth Sense, the film that launched M. Night to international stardom. Split wasn’t widely appreciated but I thought it was an entertaining, claustrophobic thriller heightened immeasurably by McAvoy’s performance. Suffice it to say that I was hooked on Glass from my first glance at a trailer.

Could these two possibly recapture the greatness that was “Unbreakable”? The Doctor certainly hoped so…

Nineteen years after the events of Unbreakable, David Dunn (Willis) is still walking the streets of Philadelphia as the green poncho-clad crusader for justice. Along with the help of his adult son (Spencer Treat Clark, now over thirty and reprising his original role), David runs a small home security store which is used as a front for his vigilante activities. Not far away, Kevin/Hedwig/Patricia/The Beast, etc (James McAvoy) is still carrying out his mission as first seen in Split. Four teenage cheerleaders are chained to a radiator in a dank, abandoned warehouse while Hedwig, the lisping, perpetual nine-year old personality informs them that they are impure and soon will face the coming of The Beast. Of course, it is only a matter of time before David and The Beast meet and square-off, but they are subdued by the authorities. How is that possible, you ask? The Beast slips into one of his non-violent, harmless personalities at the flashing of a bright strobe light and willfully submits, as does Dunn, who doesn’t want to hurt anyone that doesn’t deserve it. It’s a well performed opening act that serves to transfer the narrative into a secluded mental institution where Elijah Price (Jackson) has been incarcerated for some time in a near catatonic state. 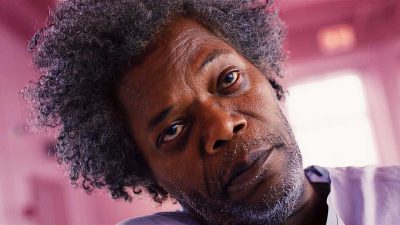 The high-tech mental institution serves as the setting for a large part of the film where Dr. Staple (Sarah Paulson) informs the trio, both individually and collectively, that she specializes in dealing with patients who think that they mistakenly have superhuman, comic book abilities as either heroes or villains. She wants to help them see the errors of their ways and find the inherent truth that they are normal human beings. Well The Doctor will be tarred and feathered, I didn’t know that was a real brand of medical science! Here I’ve been wasting my time lo these many years on useless experiments involving gin and turnips. David Dunn’s kryptonite is water, so his room in the nuthouse is equipped with dozens of high-pressure valves to drench him if he acts untoward, while Kevin and his multiple personalities live in a room with banks of powerful floodlights to blast him into another persona if he starts acting too crazy. Willis plays David Dunn exactly as he did nineteen years ago, stoic and reserved save for when he must spring into action. Willis himself appears extremely fit and is taking on something of an ageless quality. 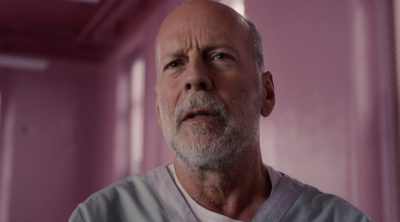 It’s not John McClane in 1988, but Bruce Willis is still Bruce Fucking Willis.

I wrote about James McAvoy’s performance in my review of Split in 2016, and once again he delivers a performance that is nothing short of amazing. I honestly don’t know how he does it. TNCC chairman Matthew Cade wrote a brilliant piece about his disdain for the Academy Awards and what they represent. I agreed completely with Cade’s assessment, and Glass provides us with even more shells to lob at awards shows: If James McAvoy isn’t going to be lauded with awards for his performance of the various personalities in Split and Glass, then what is the point of giving out awards for acting at all? I will say with this film what I said about Split: whether you like the movie or not is immaterial, McAvoy is working on a different level. Willis and Jackson are of course two stalwarts who bring the goods, but even they cannot help but be somewhat overshadowed. I almost can’t believe I just wrote that previous sentence, but I did. The fact is that all three actors deliver in the specific ways that their respective characters call for, and therein lies the movie. 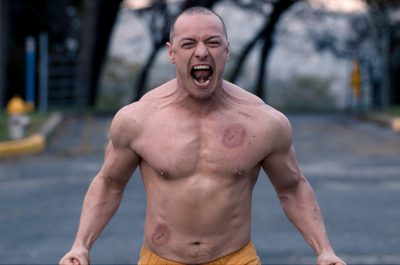 James McAvoy as “The Beast”. He’s not going over the top, he’s just going where other actors probably can’t go…

Is Dr. Staple going to get through to anyone? Not bloody likely, as the Brits might say. As Dunn tells her, some things just cannot be explained. What is the manipulating Elijah’s master plan? We know that he believes in comic books, superheroes, and supervillains no matter what Dr. Staple tries to tell him, and as a fan of comics in my youth I found the return of this theme enjoyable. The Doctor recommends taking in Glass, but make sure that you have seen Unbreakable and Split first so that you are fully familiar with the story and all the nuances of character. Or, in McAvoy’s case, the nuance of a great many characters. As usual, my friends, The Doctor wishes you all a clean bill of health. 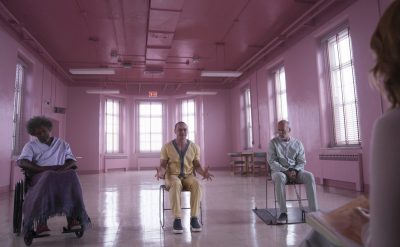