If you are looking for a horror movie to start off 2019 right – and perhaps one, like me, that you haven’t even seen before – then queue up New Year’s Evil on a chilly winter’s night and have some bizarre fun. Happy New Year, Ladies and Gents! 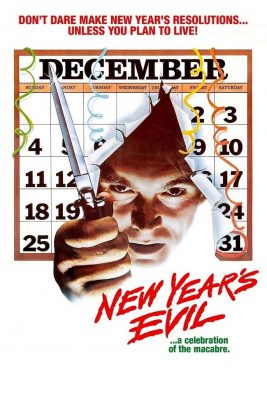 The Doctor apologizes for his recent hiatus from the Tuesday Night Cigar Club scene. Unfortunately, the tumbling stock market – combined with rumors that I (allegedly) behaved poorly at a holiday cocktail mixer, even though I correctly proved a point about the dangers of attempting certain kitchen activities while intoxicated – required that I lay low for a little while. It was in everyone’s best interest. However, that storm has passed, as all storms eventually do, and The Doctor is ready to embrace 2019 with gusto and fervor. Let’s start the new year off right with a holiday-themed horror movie. TNCC head honcho Cade and The Doctor have already produced our collective encyclopedia of works on Halloween and I think we have all had enough of the Christmas season by now, so let us thank God that Amazon Prime has made available the 1980 horror film New Year’s Evil. I don’t know how these relics keep getting unearthed, but I am damn sure glad that they do. Grab your airhorns and your champagne and let’s ring in the new year!

High above the lights of the City of Angels, during an era when it was not uncommon to see a luxury Holiday Inn hotel tower stretching into the night sky, star middle-aged disc jockey Diane “Blaze” Sullivan (Roz Kelly) is preparing for her popular New Year’s Eve show. It’s called “Hollywood Hotline”, and it’s apparently televised live in front of a young studio audience like the old American Bandstand with Dick Clark. Any horror movie that is sold under the slasher guise and is worth its weight in sea salt knows better than to waste time diddling, and the makers of New Year’s Evil do not disappoint. Diane’s assistant Yvonne has her throat slit by a switchblade-wielding intruder in the film’s opening minutes and we are off to the races. A post-punk, pre-metal soundtrack kicks into gear over the opening credits sequence as a group of… well, post-punk, pre-metal gonads and their girlfriends cruise the Sunset Strip on their way to the show. Dyed hair, gaudy necklaces, spandex, and leather pants… twas truly a different time in American History. The film serves as something of a time capsule for the 1979-1980 period and it’s evident that proficient technical care was employed with New Year’s Evil. The sound and visual quality of the film that I watched on Prime was surprisingly quite good throughout, bordering on exceptional when one considers the ilk and year of release. Kudos to whomever was responsible for making that happen. 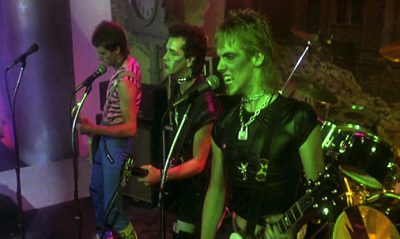 Diane is too busy preparing for her show to give any time or attention to her teenaged son Derek, played by none other than Grant Cramer of Hardbodies fame! Derek tries to inform his mother that he was recently cast in an anticipated upcoming TV show, but she is too wrapped up in her own narcissism to listen to what her son has to say. How much this familial neglect has contributed to Derek being a promising young actor who is possibly emotionally disturbed is not divulged. Check that, Derek is severely emotionally disturbed, a fact that is revealed in short order and in no short detail. Yikes. Will this plot thread somehow weave its way back into the overall story? Well, as I always tell my TNCC brothers and most of my clients, I’m afraid it’s just far too early to tell. 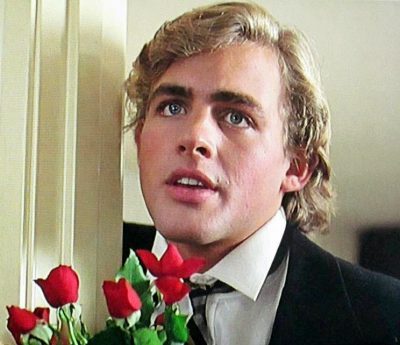 A few years before schooling everyone in how to score babes in “Hardbodies”, Grant Cramer cut his acting teeth as Derek Sullivan in “New Year’s Evil”

Right before show time, Diane gets a phone call from a guy calling himself Evil who tells Diane that someone close to her will die when the clock strikes midnight in each successive time zone. Evil is speaking through a rudimentary voice disguiser that looks like a duck call or a cigarette holder, and maybe it’s because I just re-watched Christmas Vacation for the 97th time, but he sounds like veteran actor William Hickey. Diane notifies the cops and we are treated to more bad music and the 1980 version of mosh pit slam-dancing. New Year’s Evil loves its music and dancing scenes but none of these musical cutaways takes anything away from the film. Come to think of it, maybe I should start wearing a silver padlock on a necklace and purple leopard print tank-tops. Then again, I probably shouldn’t do that.

The killer doesn’t wear a mask in New Year’s Evil, but then most slasher films are not murder mysteries themselves, so this didn’t bother me. I suspect that had much to do with the performance of the killer by Kip Niven, a longtime television and film supporting actor who smashes a wacko home run in this movie. In a strange and morbid fashion, he seems like more of the film’s protagonist than Diane, even though he is going around slitting throats. When he glues on a fake moustache it combines with his haircut to make him look like baseball Hall of Famer and Red Sox television commentator Dennis Eckersley. That is a compliment. Clad in this hotshot garb he successfully picks up a bar bimbo by telling her that he’s on his way to a party at Erik Estrada’s house. This exchange – along with just about everything else Niven does in New Year’s Evil – worked for me on a level that was highly enjoyable. 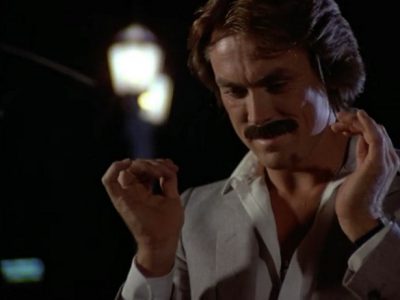 After performing his dirty work every hour when the clock strikes midnight to welcome in the New Year in each time zone, the killer then plays a tape recording of the violence over the phone to an increasingly terrified Diane. This was the pinnacle of technology in those days. The cops ask Diane to try and keep the killer talking, but he is happy to give away his location without any law enforcement chicanery. In fact, he is downright careless, especially when he accidentally sideswipes some Los Angeles bikers and is forced to hide temporarily in a drive-in movie theater. The show must go on, however, and Diane manages to keep things together, unaware that her psychologically depraved son is downing pills in his hotel room and wearing red panty hose on his head. Where is all this leading? 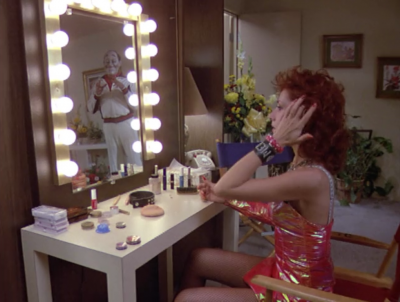 Shit, I didn’t know where it all was leading but I was sticking along for the ride!

New Year’s Evil is a weird fucking movie, but it remains entertaining throughout. It succeeds at being both intentionally and unintentionally funny while delivering on the required suspense and chills of any decent horror movie, looking and sounding good all the while. This is a movie you are unlikely to forget anytime soon, and that is something that The Doctor wouldn’t say about roughly 90% of the horror films released since the beginning of this century. If you are looking for a horror movie to start off 2019 right – and perhaps one, like me, that you haven’t even seen before – then queue up New Year’s Evil on a chilly winter’s night and have some bizarre fun. Happy New Year, Ladies and Gents. As always, The Doctor wishes you all a clean bill of health.