Daniel Marshall, a 38-year veteran of the cigar industry is one of the leading names in the cigar world. And he has a new treat for us... 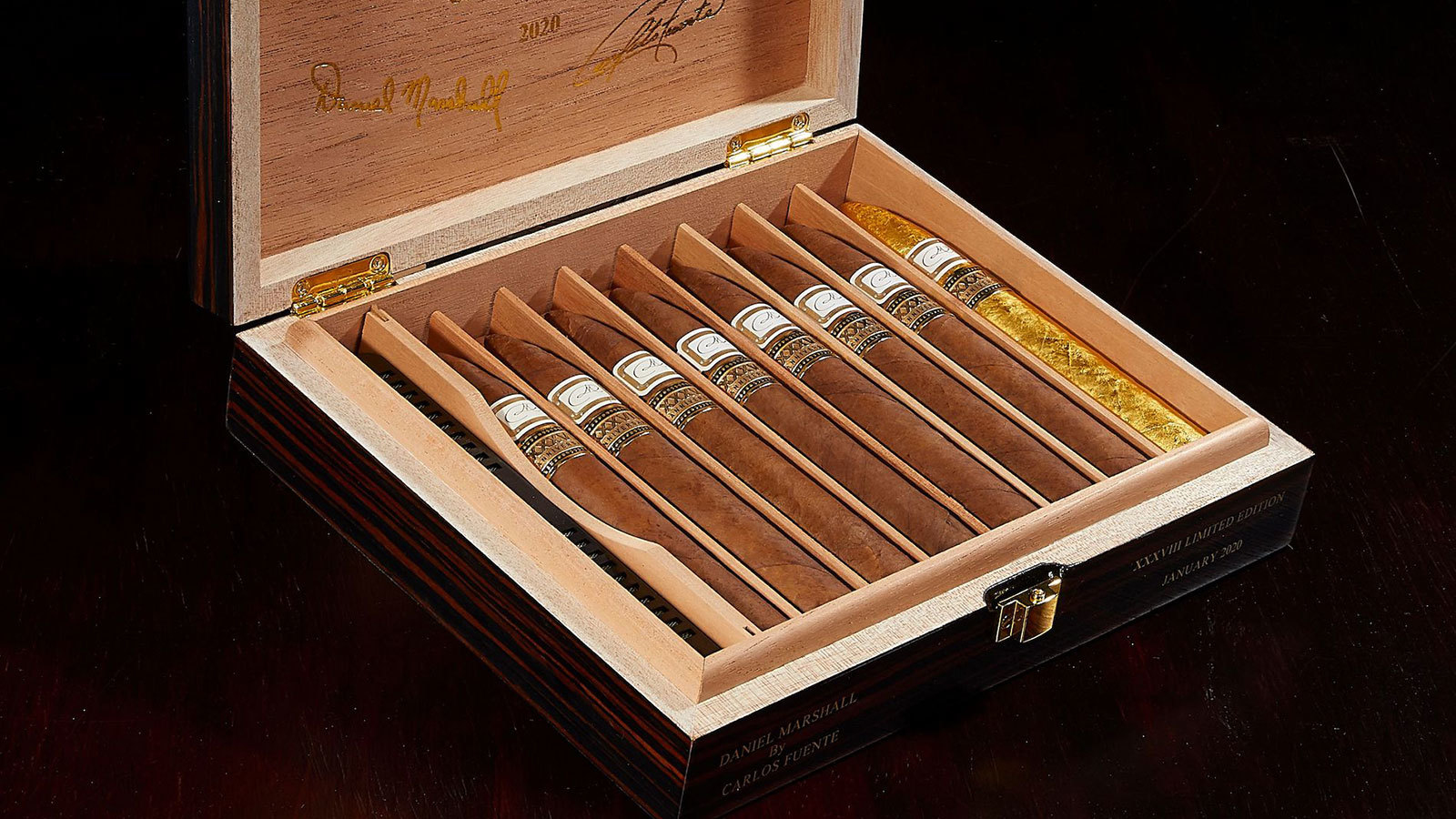 Los Angeles, CA (September 1, 2020) – The “Daniel Marshall by Carlos Fuente XXXVIII Anniversary Cigar, Limited Edition 2020” is being allocated to 38 of the world’s top tobacconists and iconic hotels, representing one location for every year since Marshall founded his company. The 116 year-old nameplate, Rolls-Royce has curated this rare cigar collection to be showcased in their elite members club, “Whispers.” The DM XXXVIII for Rolls-Royce experience will include a “Virtual Campfire” with the Founder, limited edition numbering, the addition of a 24kt XXXVIII x Fuente Golden Cigar, complimentary DMCC Membership and an autographed edition of Marshall’s Commemorative Book, “38 YEARS.”

Membership in the Whispers Club is limited to owners of Rolls-Royce, making it the most exclusive members’ club in the world. The Whispers Club highlights the world’s most rarefied luxury goods and experiences for their owners to enjoy. DM will provide a complimentary XXXVIII cigar for members to experience the nuanced flavors of this rare “Daniel x Carlito Cigar” with Marshall in an exclusive “Virtual Campfire,” an experience never before offered in the cigar world. Marshall noted his appreciation for Rolls-Royce, “I love more than anything when our beloved cigar world is embraced by legendary brands and discriminating individuals as one of life’s most cherished enjoyments, a lifestyle and a celebration.”

Designed by Marshall and Fuente, each humidor is individually numbered. Number selection of limited edition cigars is also popular with the collection, with known personalities receiving and reserving numbers such as Steve Harvey No. 17 for the day of his Birth, Wayne Gretzky “The Great One” No. 99, Andy Garcia’s favorite No. 1, and Michael Jordan’s No. 23. Marshall is offering for those that order the cigar during early allocation, a special opportunity to choose the number of the piece.

In speaking on their collaboration, Carlos Carlito Fuente Jr. told Marshall, “I want to do something for you very, very special. I am making a cigar for you, which I do for no one, to commemorate our long time friendship and my highest respect and admiration for you and your story. It’s an honor to be able to participate with you on this special anniversary. I am humbly honored to have been chosen. I poured my heart into every detail, hoping to make you proud. I will give you my best.” 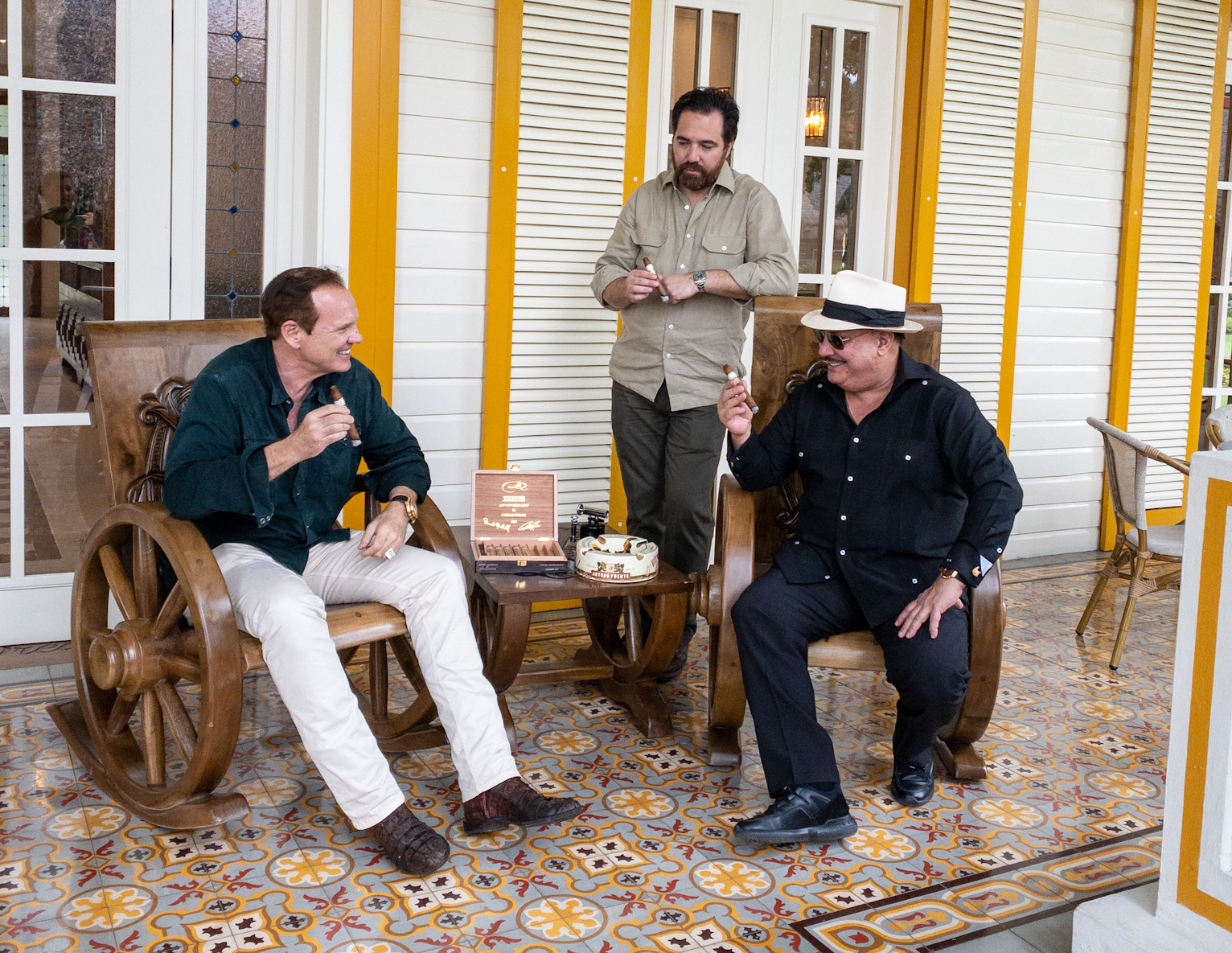 Daniel Marshall visited Carlos Fuente and Ciro Cascella in Santiago, Dominican Republic on March 5, 2020. Carlos and Daniel discussed this masterpiece cigar after their recent visit to Chateau de la Fuente. Carlos mentioned their collaboration together is historic, and suggested Daniel wrap one of the eight cigars in his signature 24kt gold. “Anyone collecting these rare cigars in the special humidor will be collecting history.” said Fuente. Both the cigar and humidor symbolize the best of what the two men have created over their lifetimes.

The XXXVIII is made from handpicked leaf, lovingly cultivated on the choicest acres at Chateau de la Fuente, Dominican Republic. One of Arturo Fuente’s Master Rollers, in a special room where the “best of the best” of Fuente’s cigars are made, brings to life only 12 of the XXXVIII Cigars a day, making this cigar extremely rare.

Each humidor will come with a hand signed commemorative book, “38 YEARS,” a book that chronicles the story of this cigar and of the Daniel Marshall journey from the creation of a thank you gift in 1982 to today.

To all collectors of this historic cigar, DM will offer a complimentary membership in the DMCC – The Daniel Marshall Campfire Club. Upon enrollment, each member will receive a “Since 1982” Travel Aluminum Cigar Ashtray, DM Cutter, DM Torch Lighter and the DMQ Magazine as well as valuable benefits and exclusive offers.

The XXXVIII will be allocated in phases across 25 Countries and 5 Continents. More of the world’s most prestigious locations that meet the criteria will be added in the near future.

View an Austrian TV report on the DM XXXVIII:

Since 1912, the Arturo Fuente Cigar Company is proud to say, “We are truly a family-run business”. Four generations and counting, the Fuente family is still loyal and devoted to the heritage and traditions that have been passed down through the years. We will continue to pride ourselves on superb quality and consistence, in order to continue making the best premium cigars in the world.

That is our code, that is our passion, that is our DNA. Fuente is the most critically acclaimed makers of hand-rolled premium cigars outside of Cuba.

The Fuente Fuente OpusX is consistently ranked as the single most sought after cigar in the world by Cigar Aficionado Magazine and know by many to be the greatest cigar in history, prized by collectors. The OpusX is wrapped in rosado leaves which are grown on the Chateau de la Fuente plantation in the Dominican Republic. Arturo Fuente OpusX Cigars are one of the rarest cigars on the market today. Known for being the cigar that all others aspire to, the Arturo Fuente OpusX Cigars use the finest premium Dominican tobacco. Each OpusX is handmade and features a one-of-a-kind Dominican wrapper that has a trademark spice to it. The vintage tobacco used throughout this rare cigar is second-to-none.

Daniel Marshall, a 38-year veteran of the cigar industry is one of the leading names in the cigar world. He is Cigar Aficionado’s No.1 rated Humidor designer and creator of the coveted 24kt Golden Cigar. DM Humidors & cigars are enjoyed in the homes and offices of countless Hollywood celebrities, US presidents, dignitaries, titans of industry, fashion designers and the most discriminating cigar lovers worldwide. Marshall is also a cigar and humidor supplier of England’s Royal Family.

Since 1982, Daniel Marshall has created and designed for the prestigious luxury gift houses Dunhill, Tiffany & Co., S.T. Dupont, Cartier, Hermes, Fred Joaillier, Harrod’s, Bally of Switzerland and Garrard’s of London. Daniel Marshall’s humidors are historic, with a collection on display at the Smithsonian Museum. 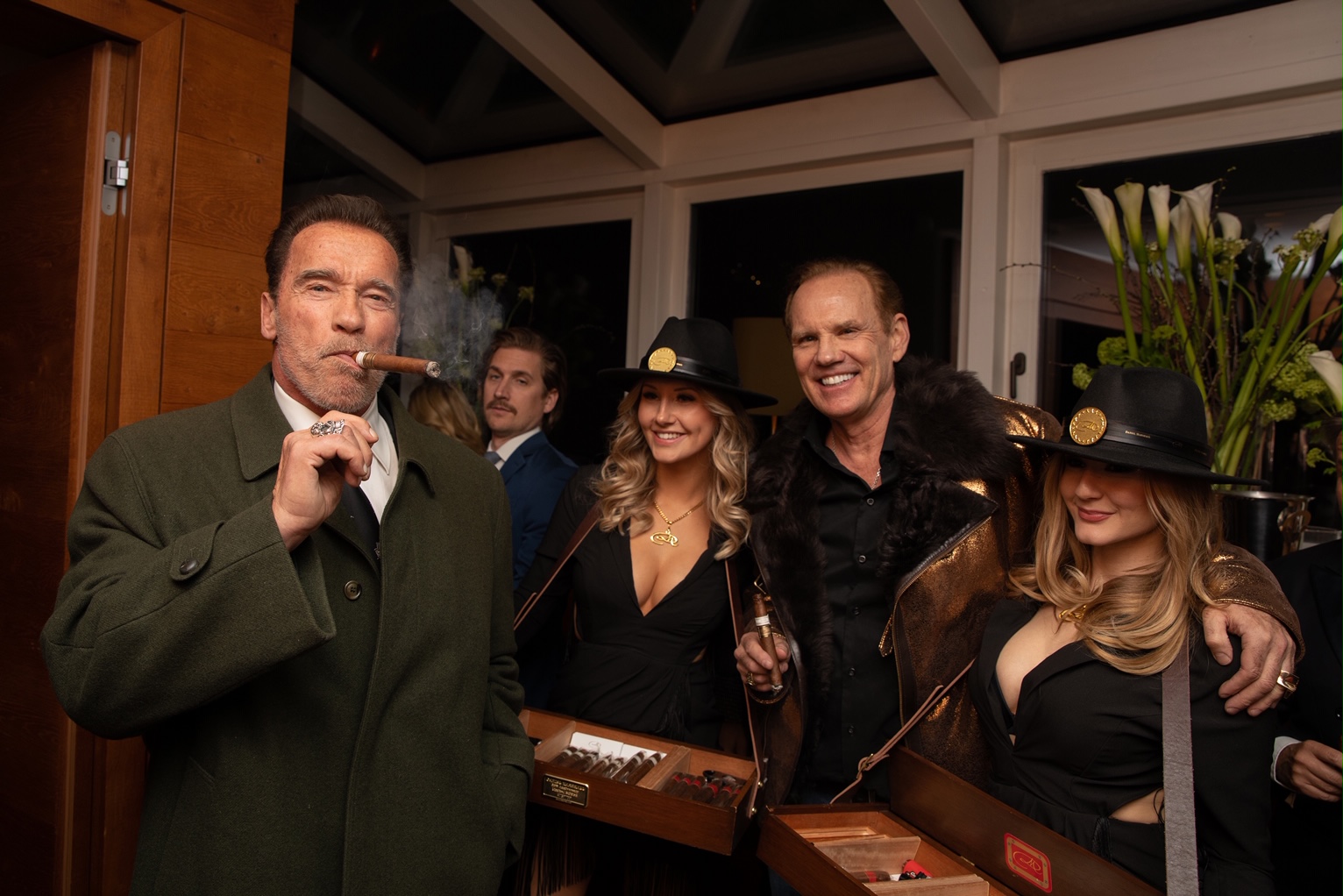 September 2017, a 1 of 1 humidor DM made for Prince Albert II of Monaco with Daniel Marshall Cigars was put on the block and raised 75,000 Euros to benefit our global oceans.

Since the opening of the Daniel Marshall Cigar Lounge in the Kitzbuhel Country Club, Austria in 2013, Daniel Marshall has been hosting elite and exclusive “Modern Day Campfire” Experiences with discriminating connoisseurs across the globe. For upcoming DM Campfires and to join the “DMCC” The Daniel Marshall Campfire Club email: TheCampfire@DanielMarshall.com 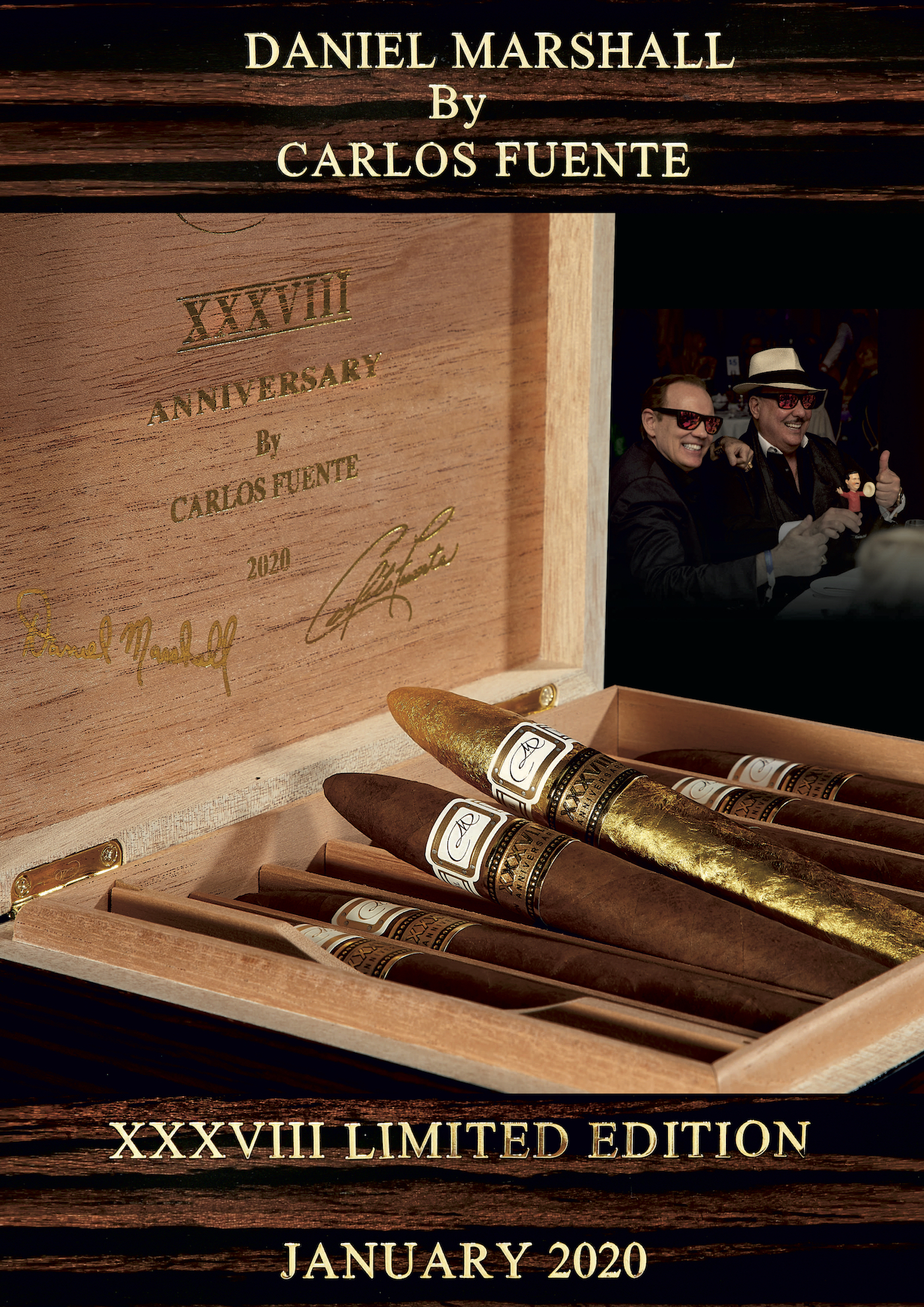