I’m always on the lookout for a nice budget friendly cigar. These stogies are often referred to as “yard gars” as they’re ideal for smoking while pulling weeds or some other menial task where you can’t relax and concentrate on the smoking experience the way you ideally would while smoking a fine premium cigar. When I discovered that our favorite online cigar shop was featuring bundles of a new cigar from one of our favorite manufacturers my heart went aflutter. Here’s what Famous Smoke Shop has to say about the Puros Huérfanos:

“The name ‘Puros Huerfanos’ means cigar orphans, and that’s exactly what they are. Hailing from La Gran Fabrica Drew Estate, the story of these cigars begins with a happy mistake. The deal is, Drew Estate’s factory made too many of one of their higher-end blends. Which one, they wouldn’t tell us. But a deal like this was too good to pass up. “Pennies on the dollar” is all we needed to hear. And since this is Famous, we passed those savings right along to you. Drew Estate disciples may try to hazard a guess at what these Habano-wrapped delights are, but we’ll leave that to their taste buds to decide. Cigars like this – at a price like this – are rare. Jump on this Famous exclusive deal and choose from seven unique sizes while you still can!” 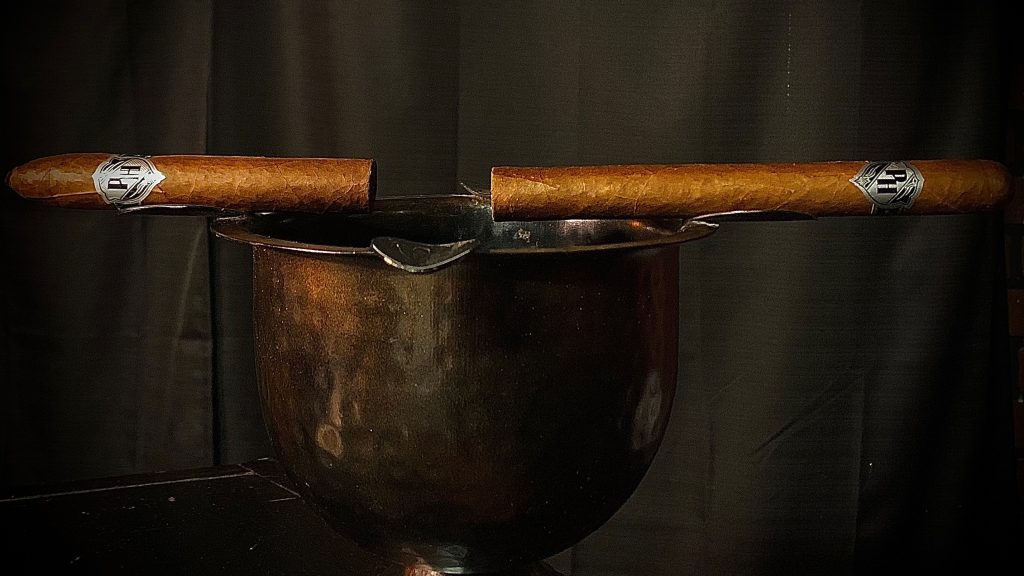 So that’s exactly what I did! More often than not, you must roll the dice and order an entire bundle of these types of inexpensive smokes in order to seek out that diamond in the rough but our friends over at Famous Smoke Shop made the Puros Huérfanos available to purchase as singles for a limited time so I gambled $6 on two different vitolas. I ordered a single Churchill sized cigar and a smaller belicoso fino and here’s what my expert-level cigar analysis uncovered… 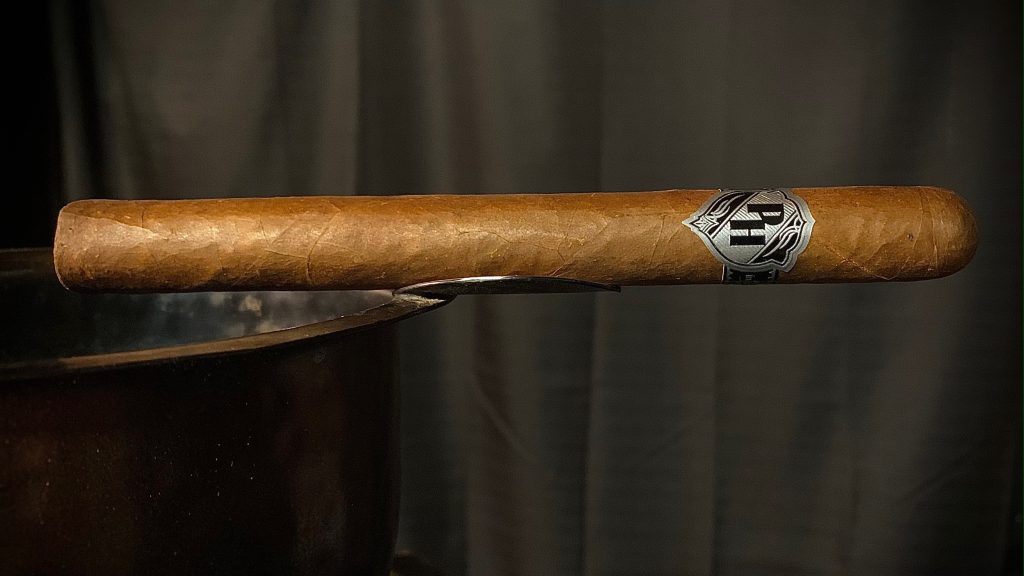 The medium brown wrapper is silky to the touch, it almost feels like velvet when running your thumb up and down it. The wrapper’s aroma is that of faint earth and a sweetness is present when sniffing the foot of the cigar directly. There’s also an aroma that reminds me of perique tobacco so we shall see if that develops into anything flavor-wise… 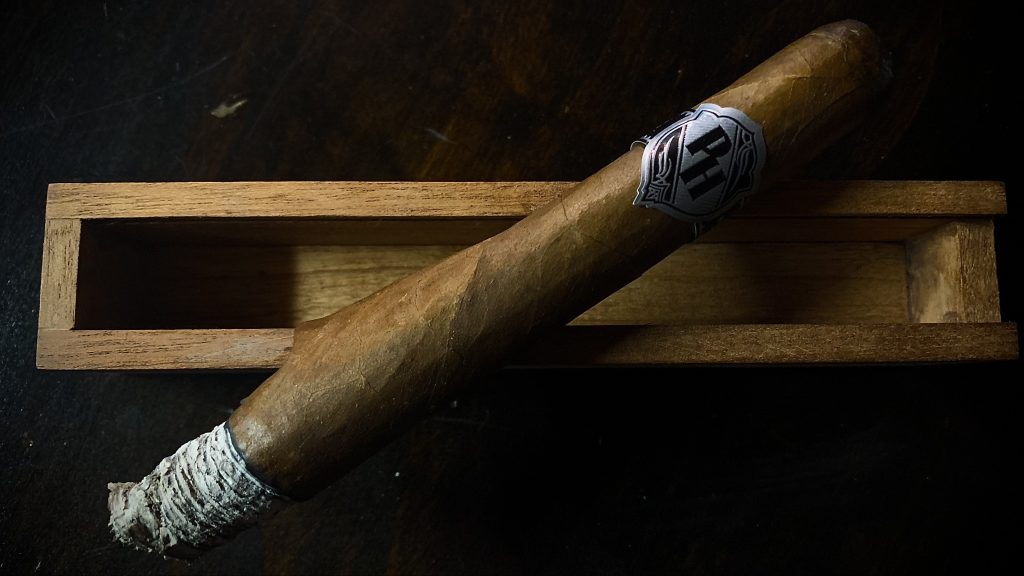 The wide open cold draw reveals very little other than earth and a slight mint. Immediately upon ignition there a warm, medium pepper spice through the nose and flavors of earth and espresso via the draw. Around the one inch mark the mint that was alluded to on the cold draw begins to reveal itself through the retrohale and it’s soon joined by a mineral component as the pepper spice subsides slightly. The far more interesting espresso note soon takes control of the draw over the generic earthiness and combined with that complex retrohale the overall flavor profile is working quite well for me in the first third. The dark grey ash only hangs for about an inch or so at a time on so keep an eye on it, your lap will thank you. 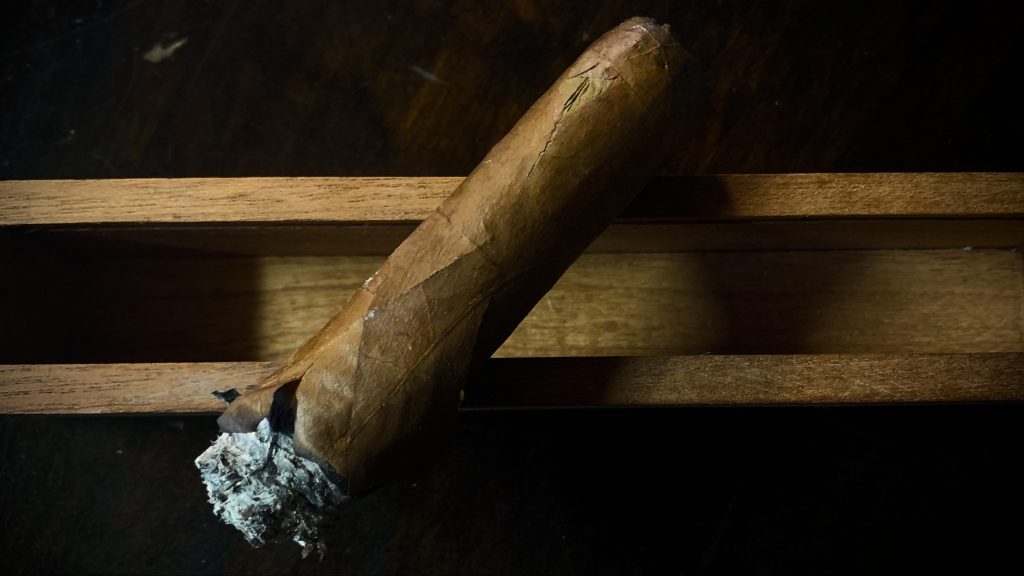 In the second third, the mineral is now ruling the roost through the nose although that spice does appear to be attempting a comeback albeit slowly. The espresso flavor on the draw has been joined by a creaminess which will never get a complaint from me. Construction has been overall very good with a smooth draw and impressive smoke production. 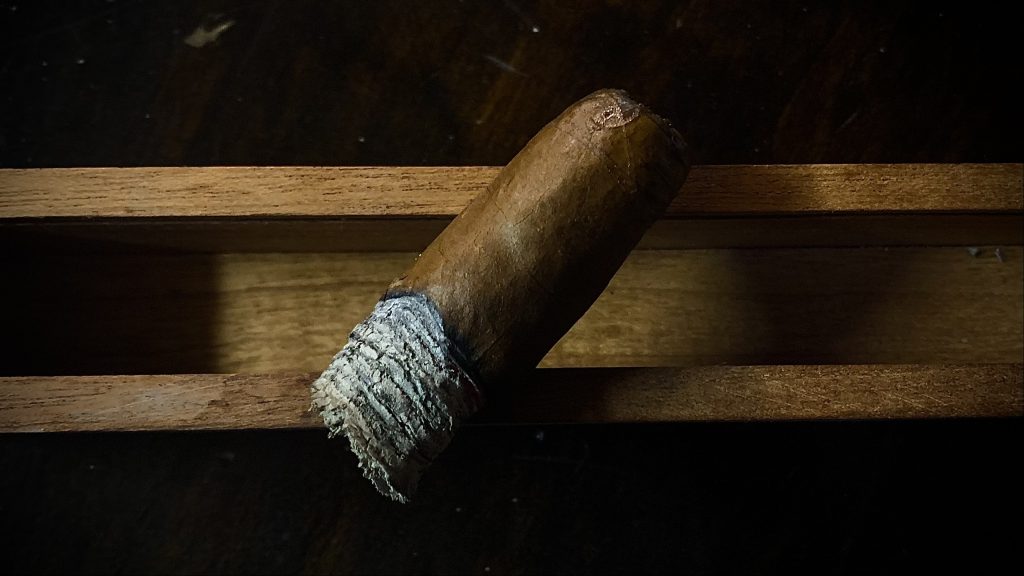 Wow, that peppery spice on the retrohale roars back with a vengeance at the beginning of the final third, far stronger than it has ever presented itself before. After a quick touch up with the lighter with only a few inches to go, the cigar ends on on familiar ground with that combination of spice and mineral and espresso on the palate (the cream component faded towards the beginning of the last act). 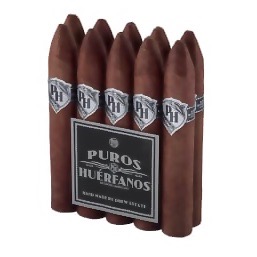 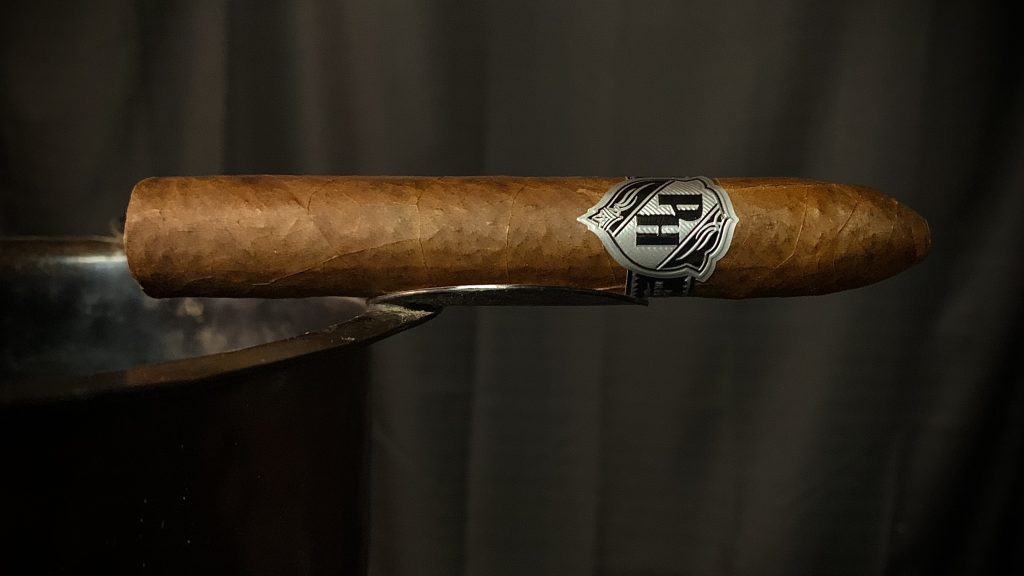 The wrapper leaf of the belicoso fino appears just a slight shade darker than the churchill but it’s far from a jarring visual difference. The texture remains somewhat silky to the touch with just a tad more prominent veins running up and down the body of the belicoso. The cigar seems well packed with just a minimal amount of give when squeezed between two fingers. 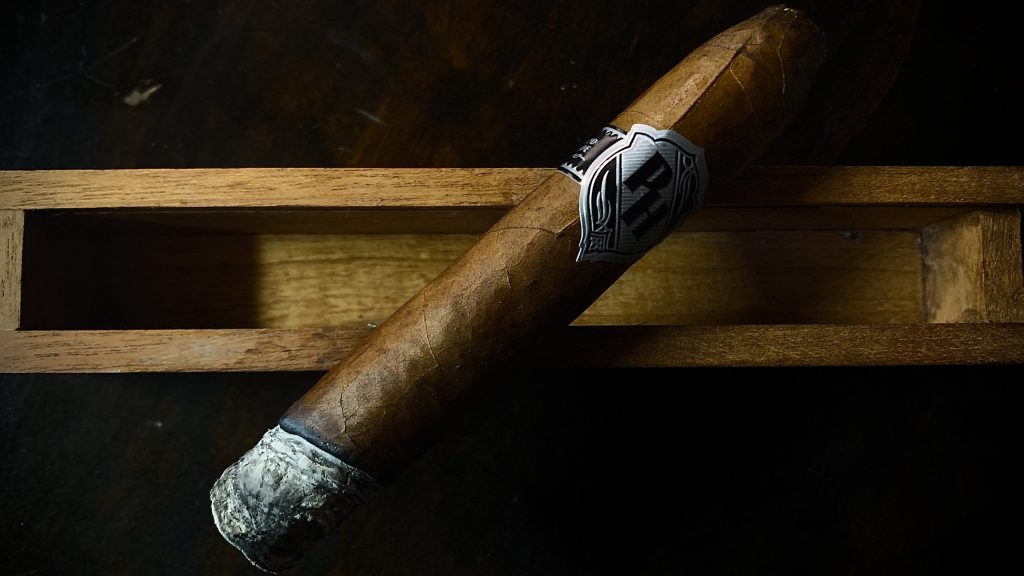 The open cold draw reveals only a faint sense of earth. After torching the foot of the cigar, sharp black pepper tingles the nostrils while medium-bodied earth and mild espresso are the two headline flavors initially on the draw. Soon that pepper downshifts and a mineral note accompanied by a pencil shavings flavor quickly become the spice’s equal via the retrohale. Construction early on is flawless with a straight burn line and strong ash. 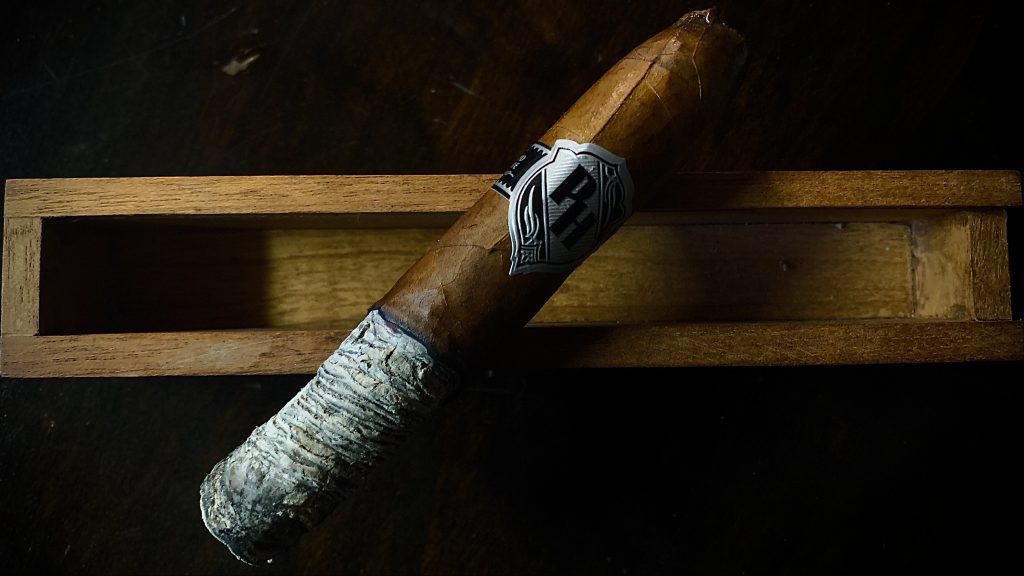 Earth on the draw piggybacked with the mild coffee flavor and that combo of mineral and pencil shavings through the nose is the story of the middle portion of the belicoso fino. Unlike with the previously smoked churchill vitola, the beautiful ash hangs on here well past the halfway mark. 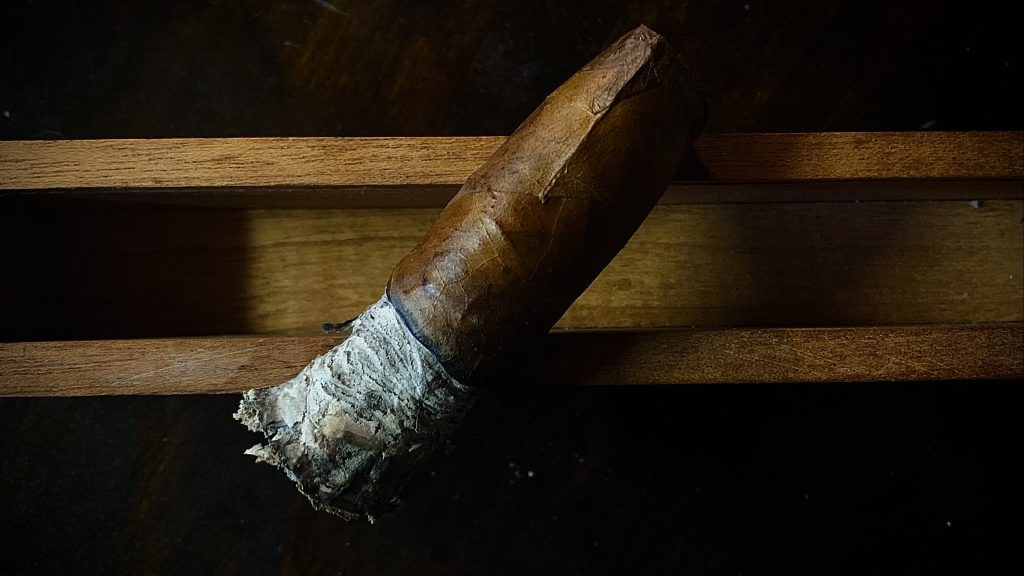 A touch of leather joins the earth and coffee in the final act and the retrohale becomes mostly mineral and pepper dominant as the pencil shavings have said sayonara and exited quietly. In fact, the pepper kicks up a notch towards the finish line which is a nice surprise. The cigar ends just like it started – medium bodied and medium strength. 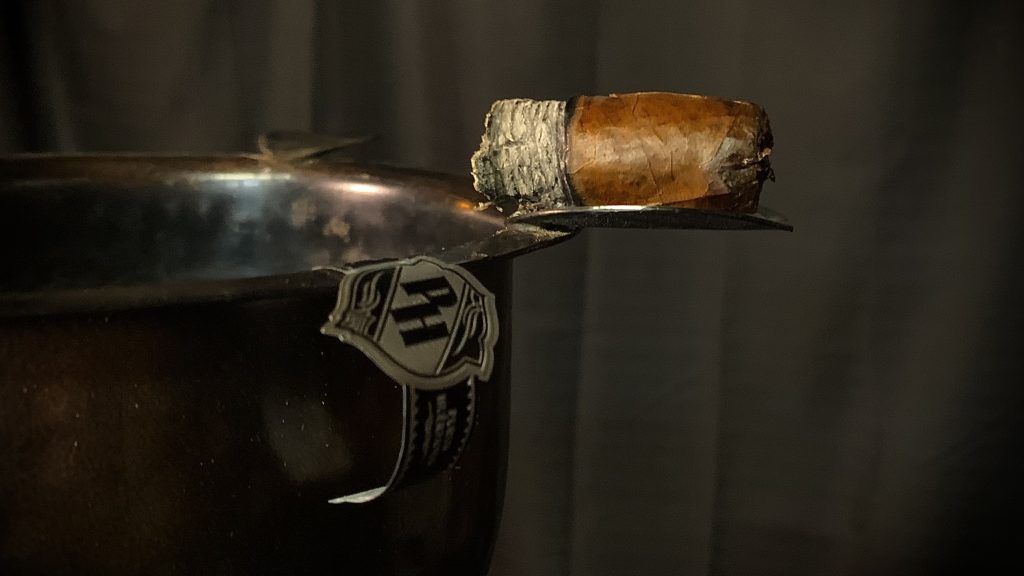 Well boys and girls, both sizes of the Puros Huérfanos preformed very similar in the flavor department and it’s eerie how they both transitioned in strength at almost the identical point in the final third. I personally enjoyed the bolder espresso expression showcased in the churchill vitola, especially when that creaminess saddled up with it, BUT by far the belicoso fino performed better from an overall construction standpoint in that it required zero maintenance or attention paid to its burn whatsoever.

Based simply on the blend of this cigar, there are several rumors floating around out there that these “cigar orphans” are actually Pappy Van Winkle Traditions (which we featured way back on Episode 61, you can read our thoughts on that cigar HERE). And, yes, there are several flavor similarities that lend credibility to that theory such as the earth, spice, and creaminess. But if you watch Episode 61 or read our review of the Tradition, there’s also quite a few noticeable differences. The Tradition showcases a bready sourdough note and a flavor reminiscent of salty peanuts that are nowhere to be found in the Puros Huérfanos… So the answer to the million dollar question of “What Drew Estate cigar actually is this?” will sadly not be answered tonight. My guess is that they could be Traditions which were possibly rolled using a wrapper leaf that was determined to be subpar visually to the rest of the line and that was enough for Quality Control to kick these cigars out of the house and send them straight to the orphanage. But that’s just one man’s take, a man who has been to La Gran Fabrica Drew Estate in Estelí and seen firsthand how meticulous their quality control process is… but still I’m just a normal man. Sort of.

So, to sum up, the Puros Huérfanos in both these sizes was an enjoyable medium cigar with consistent flavors throughout the smoking experiences and for this RIDICULOUS price point you’ll have to race over to FamousSmokeShop.com and buy some bundles before I purchase their entire inventory for myself. And don’t forget to use promo code TNCC20 to get $20 off your purchase of $100 or more. What are you waiting for? GO!