“Summer beers go down fast, so the last hour of this show should be entertaining!” Matt A. Cade TNCC Episode 9, May 2015 Well… I’m not sure if “entertaining”... 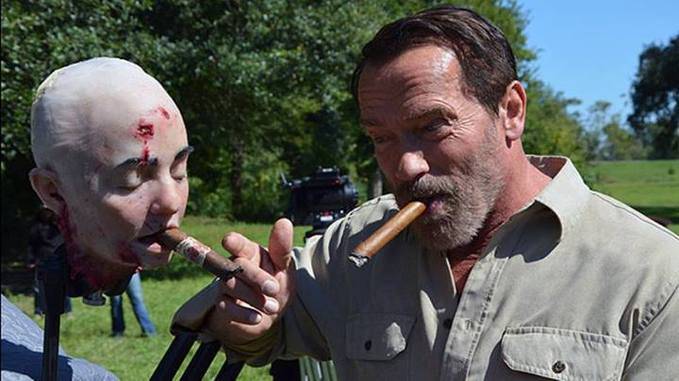 “Summer beers go down fast, so the last hour of this show should be entertaining!”
Matt A. Cade
TNCC Episode 9, May 2015

Well… I’m not sure if “entertaining” was the correct term to use in this instance. As a result of the “summer beers” featured on tonight’s podcast, this is the first episode that I edited out a large chunk of material in the final hour. Was the deleted stuff any good? Sure, it was our usual insanely witty banter and irreplaceable insight. But the show crept over the FOUR AND A HALF HOUR MARK for Christ’s sake and I just had to pull in the reins a bit. There is, believe it or not folks, a such thing as too much Tuesday Night Cigar Club.

Sometimes you can just taste really good aged tobacco in a cigar. Within the first few puffs you know that you’re holding something very special that quite a bit of thought has gone into. The Daniel Marshall Red Label fits that description to a tee. We’ve been reviewing some rather spicy cigars the last few weeks and as Tut says on the show “With all the craziness in life, this cigar is a breath of ahhh, smooth and calm”. With zero spice or pepper present, the Red label has an understated elegance throughout the smoking experience. The stogie features a delicious natural sweetness from start to finish and the construction is flawless with a perfect burn line throughout.

The Red Label is flavorful and we all gave it the “box worthy” stamp of approval. Plus the man behind the cigar, Daniel Marshall himself, is a close friend of Arnold Schwarzenegger! That alone speaks volumes but the proof is in the pudding – he makes a damn fine cigar.

The “summer beer” referenced above was quite good. But it’s a Karbach Brewery beer so that should come as no surprise to listeners of the podcast. Crisp and delicious with just a little bit of hoppy bitterness on the back end. This beer goes down super smooth and super fast if you’re not careful. Especially when you pair it with some fiery conversation and a fantastic cigar. So while I may have had to trim the last hour off of the show due to circumstances beyond our control (please reference the super smooth and super fast descriptives used earlier), it was no fault of the wonderful Love Street – just the knucklehead drinking it.

Before I became the ballsy podcasting virtuoso you all know and love today, I was a struggling independent filmmaker. More accurately I was an underground filmmaker who was beyond struggling to get his next film off the ground. Five years ago, I shot the above “proof of concept” video for my screenplay Run Like Hell in an effort to hopefully draw attention from potential financiers. The reason that I bring this up is that tonight’s film Maggie reminds me of my little story in many ways. Both our stories are about fathers, about their relationships with their children, about their regrets. I always thought a 90s action icon like Arnold or Bruce could do wonders in my film now that they’re older and have raised children of their own. Oh, and both stories have a zombie or two thrown in the mix. But while my screenplay for Run Like Hell sits safely undisturbed for years in my file cabinet… Maggie actually got made. And it got made with Arnold Schwarzenegger in the lead role of the conflicted yet always protective father. And it’s a really special performance from Arnold that you’re a sucker if you miss out on.

I truly walked into tonight’s show thinking I was going to face some resistance from Yaks and Tuttle on this film. Mainly because I’m a father to a little girl and I ignorantly assumed that the boys would be expecting a typical Arnold action movie and simultaneously spit on this little indie art film. Boy was I wrong, we all loved it. And while we all loved different things about it, we all unanimously respected what it is at its very core – a character study of a broken man facing the inevitable death of his child and how he deals with it minute by minute. So listen to the podcast and let us convince you why it’s so damn heartbreaking and why Arnold Schwarzenegger should (but will never) win an Oscar.

Some lessons were learned on tonight’s episode:
1) If Arnold Schwarzenegger hangs out socially with a cigar manufacturer, chances are that gentleman might just make an exceptional cigar
2) If Arnold Schwarzenegger puts his mind to it, he can accomplish anything he wants to. He’s proven it time and time again throughout his entire life. This time around Arnold wanted to show the world that he can act circles around anybody with Maggie and he fucking did it.
3) It’s very VERY important to eat a decent meal before indulging in a three hour podcast’s worth of summer beers. Lesson learned BIG TIME on that one.

See you next time when we’ll be reviewing another cigar, beer, and film in our own special way. May the wings of liberty never lose a feather.

GET YOUR ASS TO www.fritzbeermusic.com!!!