This is one of those cigars where you can truly sense the blender’s intent, there are no happy accidents at play here - this smoking experience is unfolding by a very carefully calculated and expertly constructed design...

Illusione brand owner Dion Giolito focused on refinement and subtlety over strength when blending the Epernay line, so these cigars are constructed without any ballsy ligero tobacco whatsoever. The goal here is to give the Epernays an effervescent, elegant experience similar to sipping a fine champagne (Epernay is a town in the heart of France’s Champagne region). Personally I don’t care for champagne, I make my Sunday morning mimosas with prosecco like a real man. However, I was able to put personal preferences aside and smoke the Epernay Le Matin any way because I am a professional dammit and that’s what professionals do… 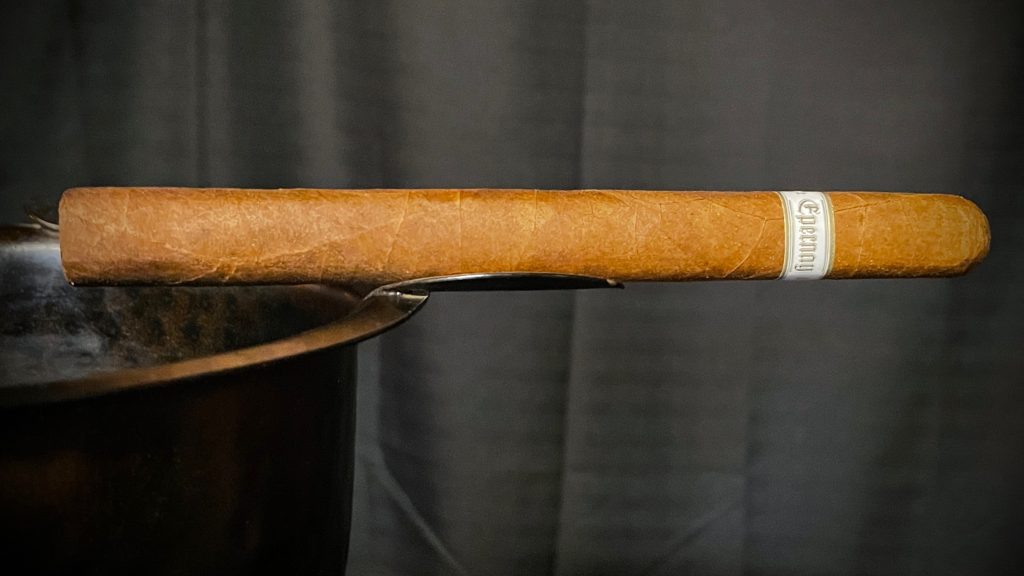 While the medium brown wrapper has a nostalgic musty aroma to it, think old books that haven’t been pulled from the library shelf in years (that’s an aroma I happen to love by the way), smelling the foot of the Epernay Le Matin directly reveals herbal tea and just a slight hint of cinnamon. 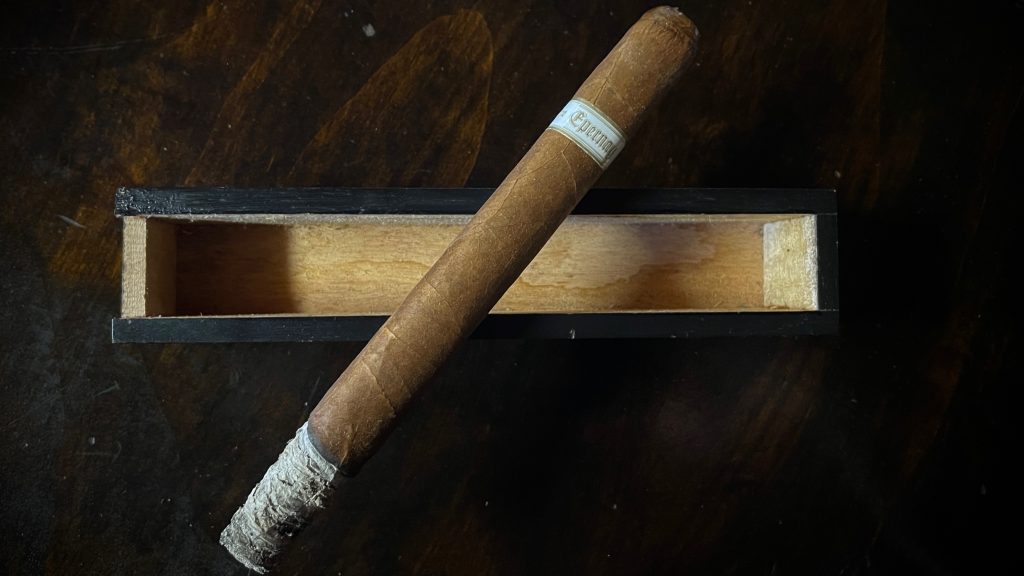 After experiencing a cold draw that featured just the tiniest sensation of tea, I lit the Epernay Le Matin on fire and was immediately greeted by a crisp white pepper spice through the nose and cedar paired with a floral element via the draw. The spice’s strength downshifts fairly rapidly which allows a mineral component to arise and partner up with the now significantly tamer pepper. At the one inch mark, a buttery note joins in on the retrohale as well. 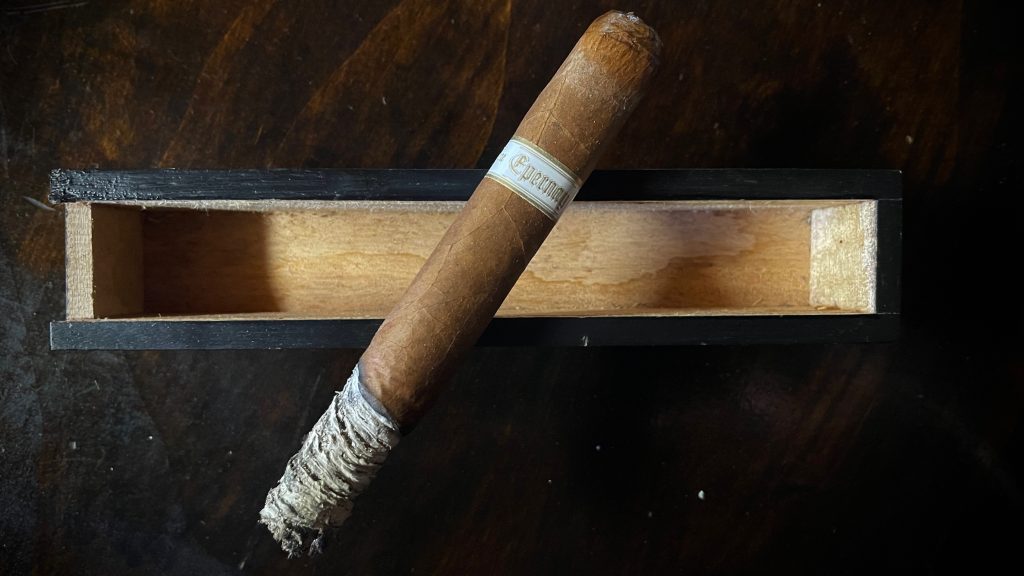 Construction has been fantastic so far with a smooth draw, straight burn line, strong ash, and copious smoke production. What else could one ask for? A mild saltiness has joined the overall profile and it is playing nicely with the preexisting floral flavors and the cedar. I wish that I hadn’t mentioned mimosas earlier because now I want one and there’s no orange juice in the TNCC fridge goddammit. The butter exits the retrohale a little before the fifty yard line which is unfortunate; however, the mild white pepper and mineral remain an enjoyable combination in its absence. 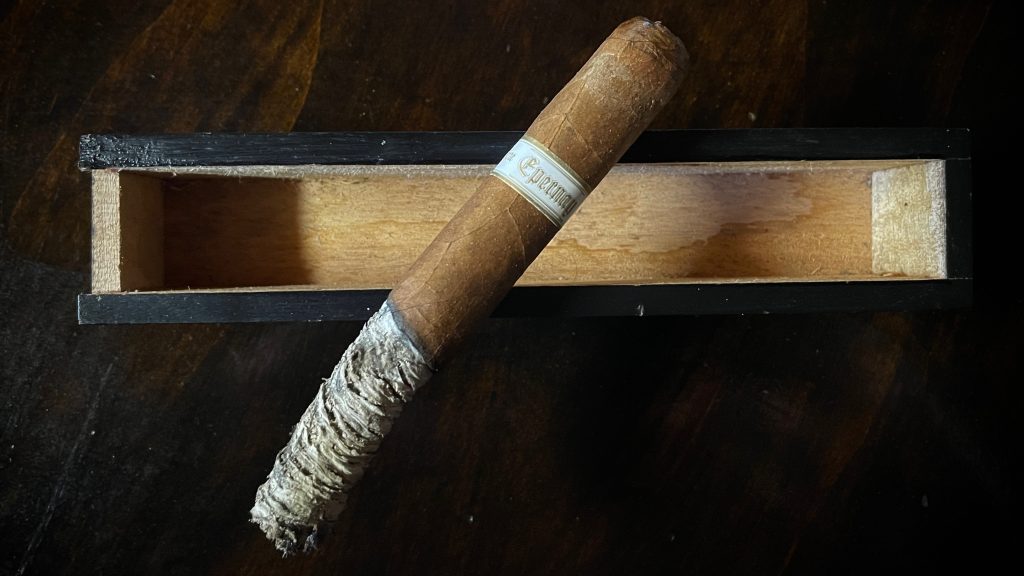 Towards the end of the second third, a subtle mint note has now emerged through the nose and, again, it is complimenting both the draw and retro flavors nicely. Regular listeners to the Tuesday Night Cigar Club podcast know how much we despise boring cigars and the Epernay Le Matin is far from boring. Speaking of just how “not boring” this cigar is, a graphite/lead note suddenly appears on the backend of the draw just as the retrohale’s buttery note makes a triumphant return. 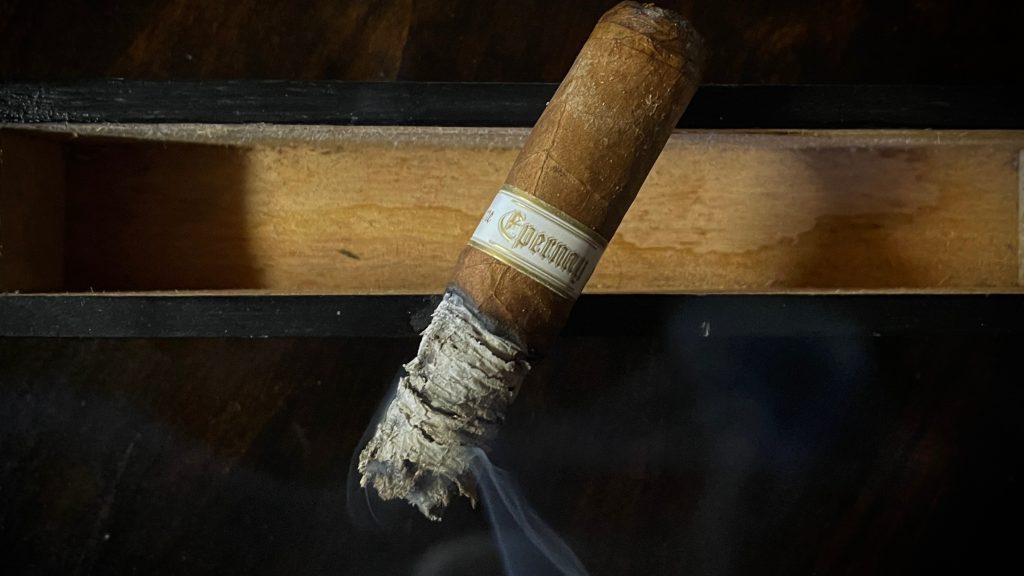 All of the aforementioned flavors are at play now in the Le Matin’s final act, with the addition of a brief but spectacular vanilla cake icing note that flutters in and out at times through the nose. This is one of those cigars where you can truly sense the blender’s intent, there are no happy accidents at play here – this smoking experience is unfolding by a very carefully calculated and expertly constructed design. Construction has remained impressive in all categories throughout the entire smoking experience. 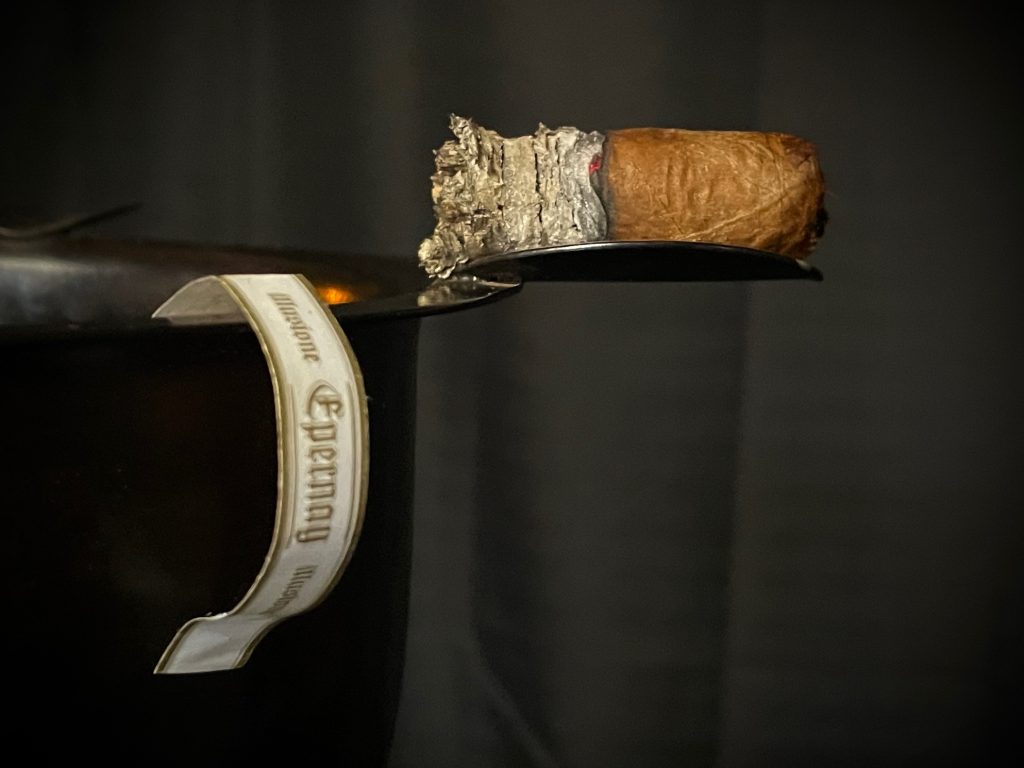 I highly recommend smoking the Epernay Le Matin slowly, which is admittedly difficult because it’s a damn good cigar, but when I puffed a little too quickly some of the more nuanced flavors got lost in the shuffle. The Le Matin is a savory, complex cigar that features some very distinct, delicate notes and you absolutely don’t want to rush things and miss out. So kick your significant other out of the room and smoke this sucker alone with the TV turned off so you can give it all of your attention for 85 minutes – trust me. The end result here is a Nicaraguan puro unlike any other that I have smoked over the years. I’m highly curious as to how the other vitolas in the Epernay line would differ in their flavor profiles so, again as the professional that I am, I shall be seeking out some other sizes soon and perhaps I’ll report back. It’s a dirty job but somebody has to do it… but for now I’m off to the grocery store to buy some orange juice.