There are no clever metaphors at play in Texas Chainsaw Massacre as the entire movie is deliberately lacking in any subtlety whatsoever...

Well, they have gone and done it to us once again. “They” being the rapscallions who dictate which movies will be available on Netflix and “us” being your favorite Doctor and Tuesday Night Cigar Club Chairman Cade. As the season changes with its usual staid inevitability, winter slowly giving way to the rites and hopes of spring, the ninth entry of the Texas Chainsaw Massacre was made available for viewing. Should you be so inclined – and why wouldn’t you – the TNCC’s podcast on Part 2 is available for viewing HERE. And should you have a masochistic bent with regard to the membraneous tissues surrounding the cerebellum, you can revisit The Doctor’s review of the fourth installment HERE. Are we gluttons for punishment? I am afraid that it’s far too early to tell, of course, but as soon as Cade and I saw the titillating trailer, there was no question as to whether or not we were taking the plunge. After all, it’s Leatherface, and we do not turn our backs on the legends. Especially when they come equipped with a chainsaw. 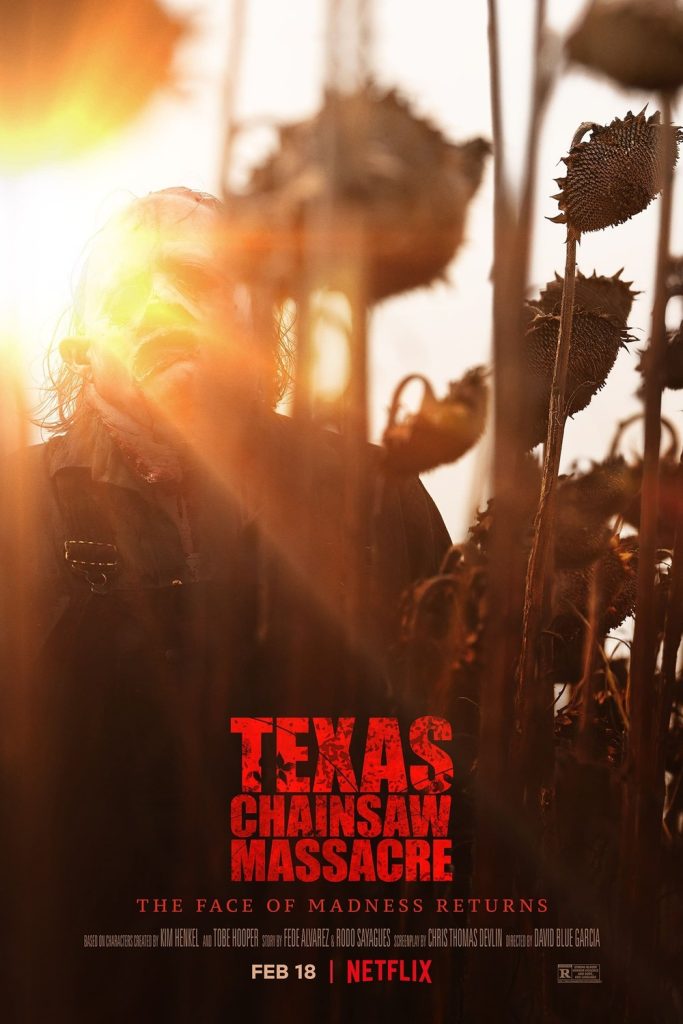 Chainsaw is by far the most lacking in continuity of any of the major horror franchises. In other words, there is very little continuity to speak of at all. Chainsaw has been remade, rebooted, and re-prequelized – I know that isn’t a real word – to the point that the filmmakers do the only sensible thing, which is to reboot the sucker once again so that nothing has transpired since the events of the original. We are so far removed from those horrific events, in fact, that they have become somewhat mythologized in this entry. Small convenience stores along the dusty Texas roadside have mimicked Roswell’s tourism efforts by selling t-shirts and trinkets such as wine corkscrews attached to little rubber chainsaws. What the hell, it beats alien rectal probes. When asked about the fate of 1974’s lone survivor Sally Hardesty, a local shop owner informs a young lady that Sally became a Texas Ranger and searched for the masked killer for 40 years, albeit fruitlessly. In the present environment, Leatherface has now taken on the mythical aspects of the Loch Ness monster and Bigfoot.

A group of young, Austin-based Gen Z/Millennials have purchased most of the real estate in the ghost town of Harlow, Texas. The idea is to sell the properties at auction to likeminded individuals and turn Harlow into a utopian paradise for idiots – er, I mean, idealists. The plan proves problematic when the would-be entrepreneurs Melody (Sarah Yarkin) and Dante (Jacob Latimore) find that the abandoned orphanage in the center of town isn’t entirely abandoned. A creepy old woman (veteran actress Alice Krige) still resides there and cares for her supposedly slow-witted yet hulking son, who seems peaceful at first… When she cannot produce the deed to her house, the poor lady is forcibly removed by the local cops and put into a paddy wagon where she dies in transit, paving the way for Leatherface (Mark Burnham) to make a return in gruesome fashion. It’s an updated scene of the bloodletting that transpired when Michael Myers woke up in the ambulance transporting him from Ridgemont Federal Sanitarium in Halloween 4, and the stage is set. 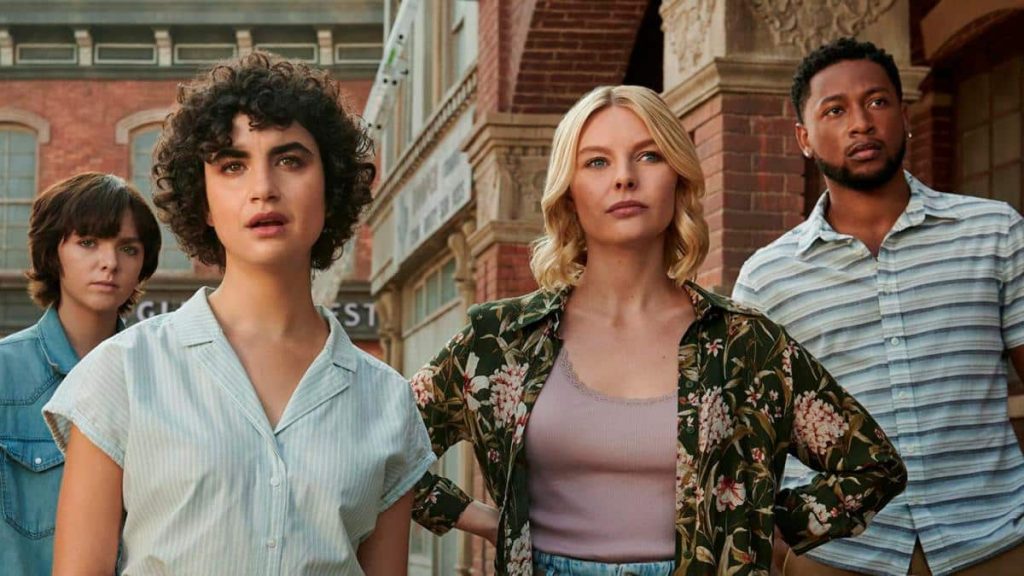 A busload of additional Gen Z/Millennials arrives in Harlow to participate in the auctioning of the rustic buildings, which I suppose isn’t the worst idea in the world. The ghost town makes for a good horror film setting, and the rest of the movie is beautifully shot in what passes for the rural Texas countryside, although it was actually shot primarily in Sofia, Bulgaria. It may be hard to imagine for those who do not make their homes in the Lone Star State, but it is possible, even in the modern day, to drive along vast stretches without seeming to encounter anyone, and the filmmakers found the right spots to recreate the necessary taut atmosphere. This iteration of Chainsaw also includes certain scenes that tend to induce a claustrophobic feeling in the viewer, which was a staple of the original. Eventually Sally Hardesty gets word that Leatherface may be back in action so she heads for Harlow with her loaded pump-action shotgun. 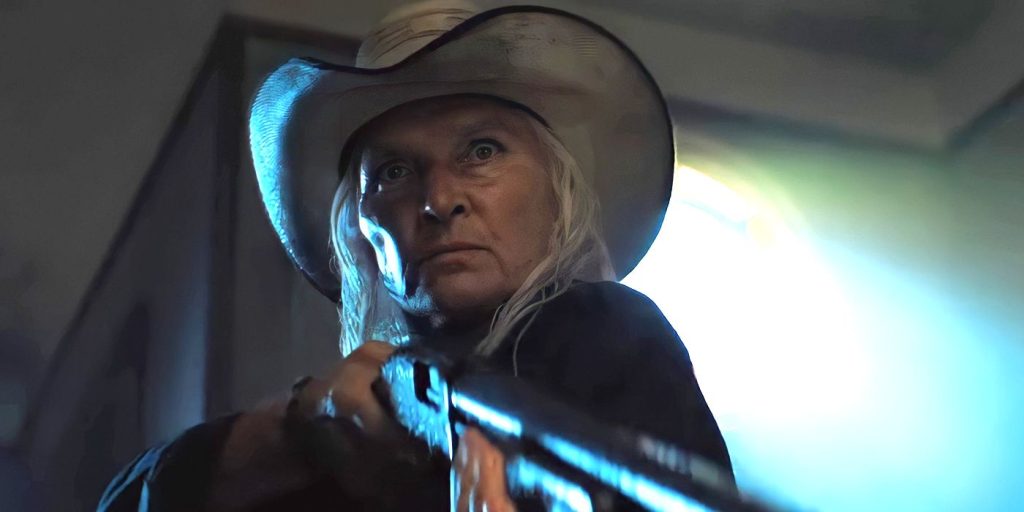 I do not wish to give anything away, but one of the film’s more entertaining scenes takes place when Leatherface boards the bus and squares off against two dozen or so of the aforementioned Gen Z/Millennials. There is no metaphor at play, as the entire sequence is deliberately lacking in subtlety. This is not the first instance in the movie where darts are thrown at the stereotypes of the younger generation. Whether this is fair or not is up to the individual viewer and will depend, as always, on said viewer’s specific life experiences and age demographic. Suffice it to say that the people of 2022 depicted in this film are armed with their smart phones and cancel culture, and the anachronistic horror icon who first appeared in 1974 is armed with his chainsaw. It’s more than a bit of fun, and The Doctor really appreciated this thematic touch and its execution (no pun intended.) 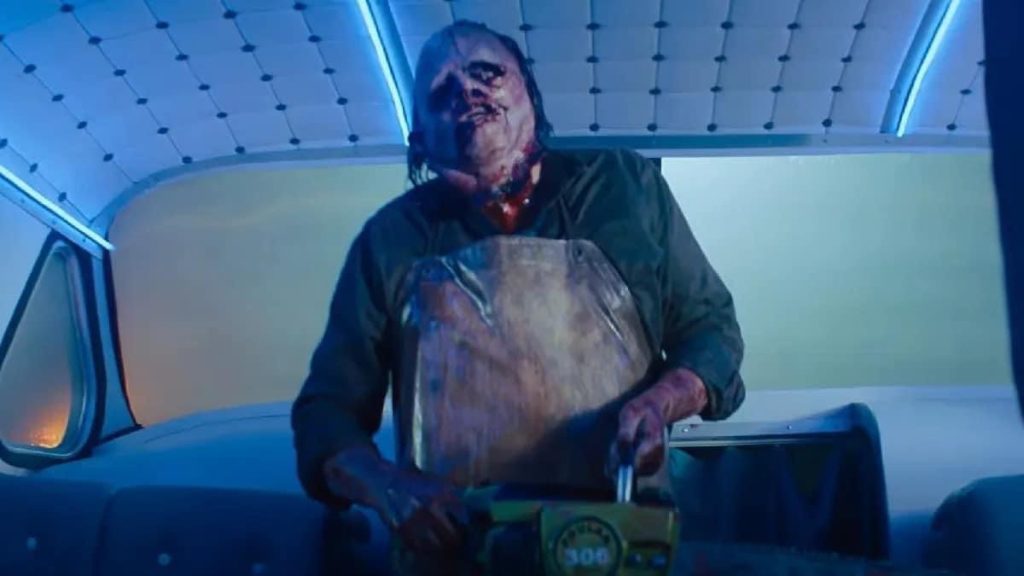 When threatened with “cancellation” and the live-streaming of his actions by the younger generation, what do you think Leatherface will do? Might it involve some sawing, perhaps?

No disclaimer should be necessary when it comes to a Chainsaw film, particularly one made in 2020, but as I consider myself a responsible professional I will go ahead and provide one free of charge. This latest Texas Chainsaw Massacre is suspenseful and well made, but it’s a splatterfest. Certainly entertaining as far as The Doctor is concerned, but a splatterfest nonetheless. Brutal violence and visceral gore rule the day in Texas Chainsaw Massacre, and while this shouldn’t come as a newsflash to anyone versed in the genre I felt like it was worth mentioning. It’s all make believe, so don’t chastise the filmmakers for reveling in it; some people like Chainsaw movies and some people don’t. You know who you are. If you fall into the former category like The Doctor and Cade, I think you will enjoy the latest Texas Chainsaw Massacre. As always, dear friends, The Doctor wishes you all a clean bill of health.