If you happen to experience a tight draw early on, just pour some rye whiskey and have a little patience - trust me...

La Libertad has been around the block for quite a while now but it recently got a complete branding overhaul. Not only has the cigar’s packaging and band aesthetics been reworked but the cigar itself has had a major blend change due to it being the first cigar manufactured at Villiger’s new factory in Estelí, Nicaragua (Villiger de Nicaragua). 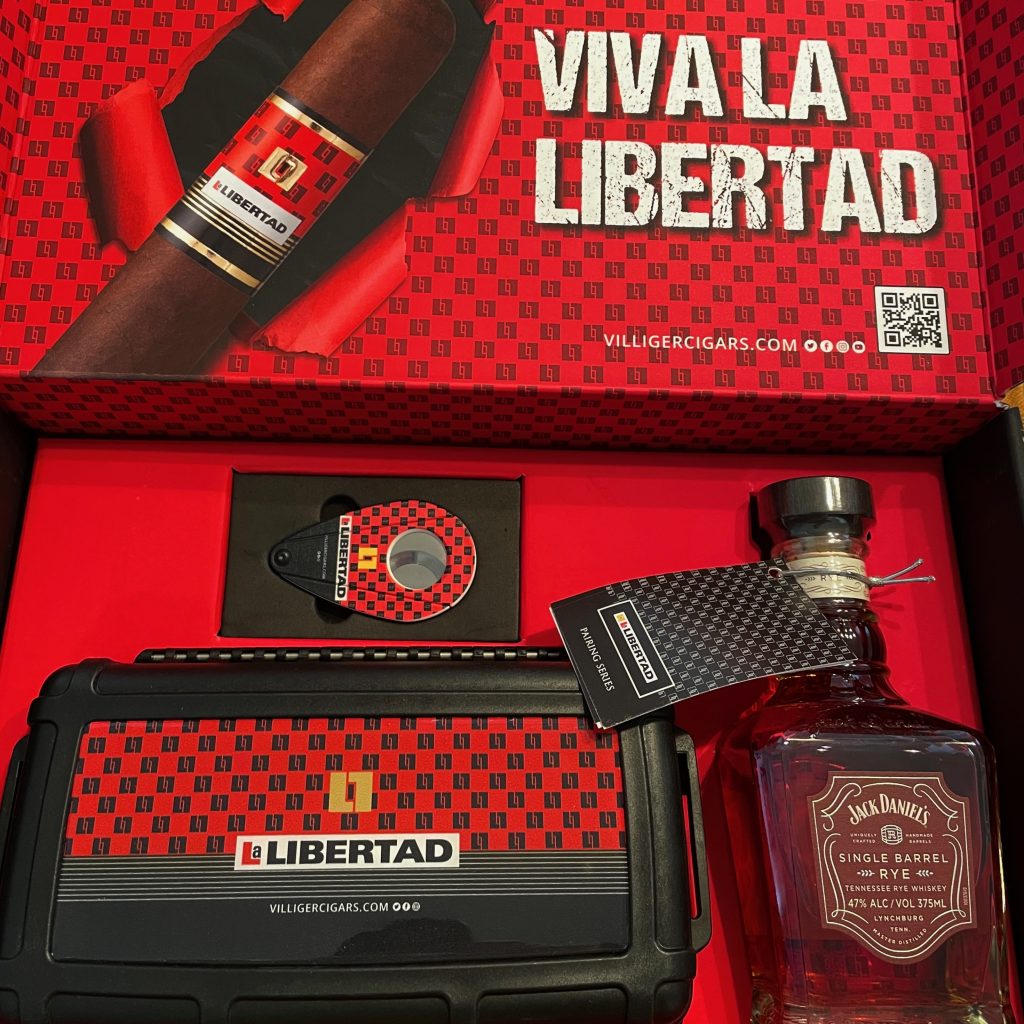 THE CIGAR – LA LIBERTAD by VILLIGER 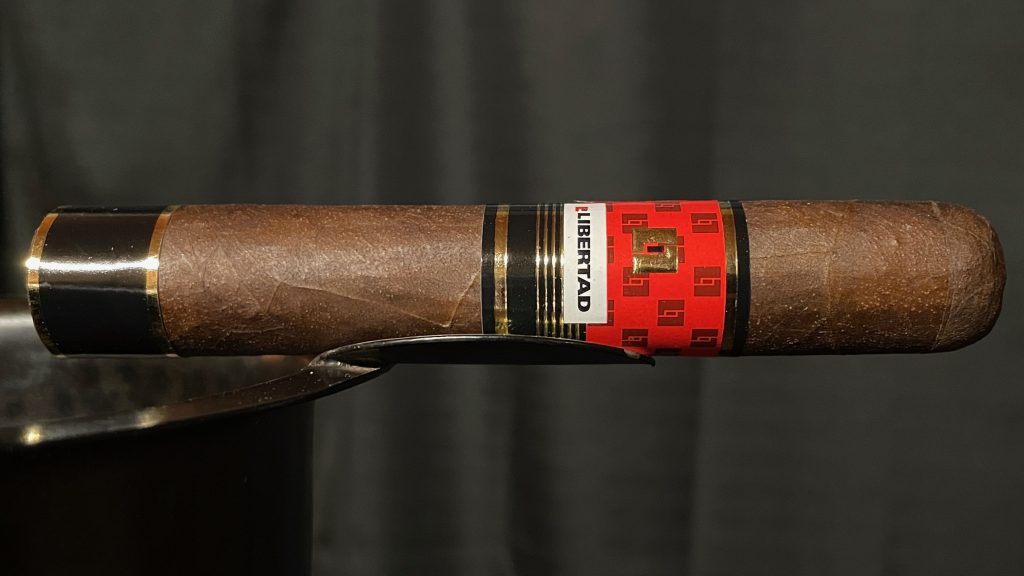 La Libertad features an attractive dark wrapper leaf with minimal veins and no surface oils present. The cigar is very firm when squeezed between two fingers. The Criollo wrapper’s aroma has a rich sweetness present when sniffing both the body and foot of the cigar. I like the black and red color combination with gold accents on the La Libertad’s band, it’s eye catching and classy. 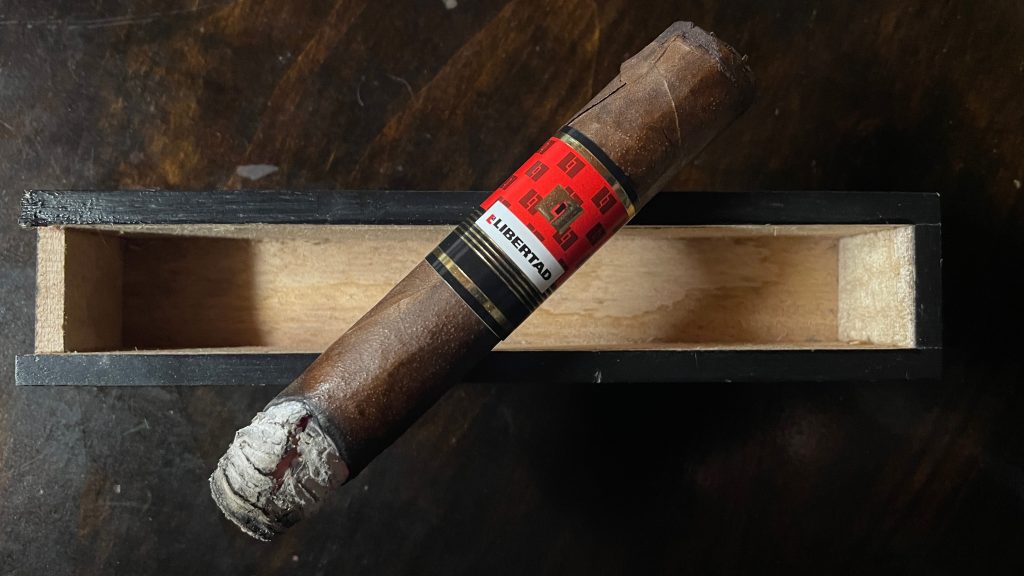 After experiencing both earth and mild barnyard on the cold draw, I torched the foot of La Libertad and was greeted first by medium-strength white pepper through the nose while a generic earthiness backed by a soft leather came through reluctantly via the draw. I use the term reluctantly because the draw was super tight, so tight that I cut the cap an additional two times and jabbed the head of the La Libertad gently with a sharp nub tool in an attempt to improve the airflow. Maybe this is why they sent along the bottle of whiskey? 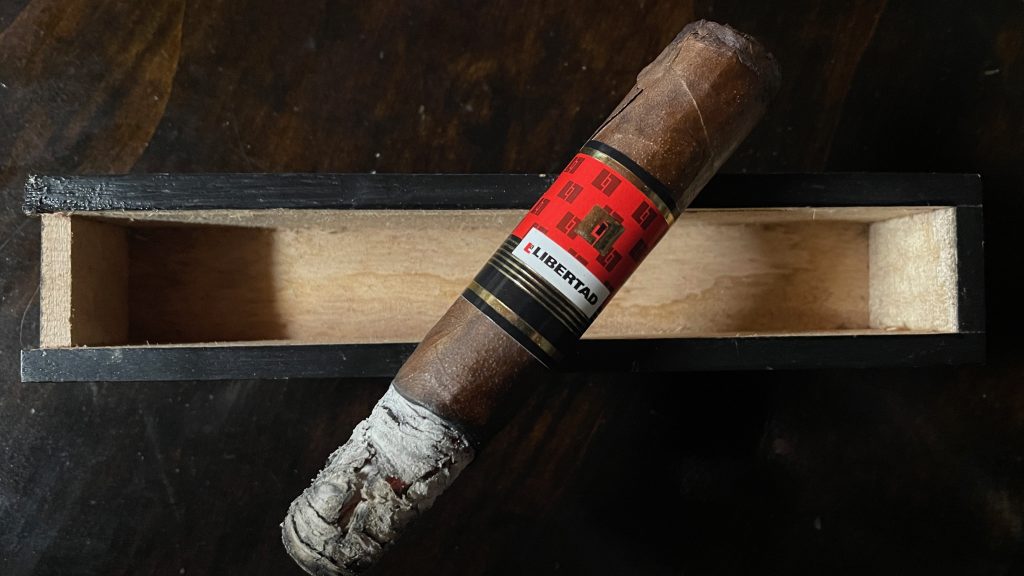 Around the 1.5” mark, after pouring myself a tall glass of hootch and preparing for the worst, I began to notice an increase in smoke production and more smoke exiting the head of the La Libertad as well. Hallelujah! Is there any problem that booze can’t solve? The improved airflow allows some mineral and an oak component to arise on the retrohale and Guatemalan coffee joins the earth and now bolder leather through the draw. 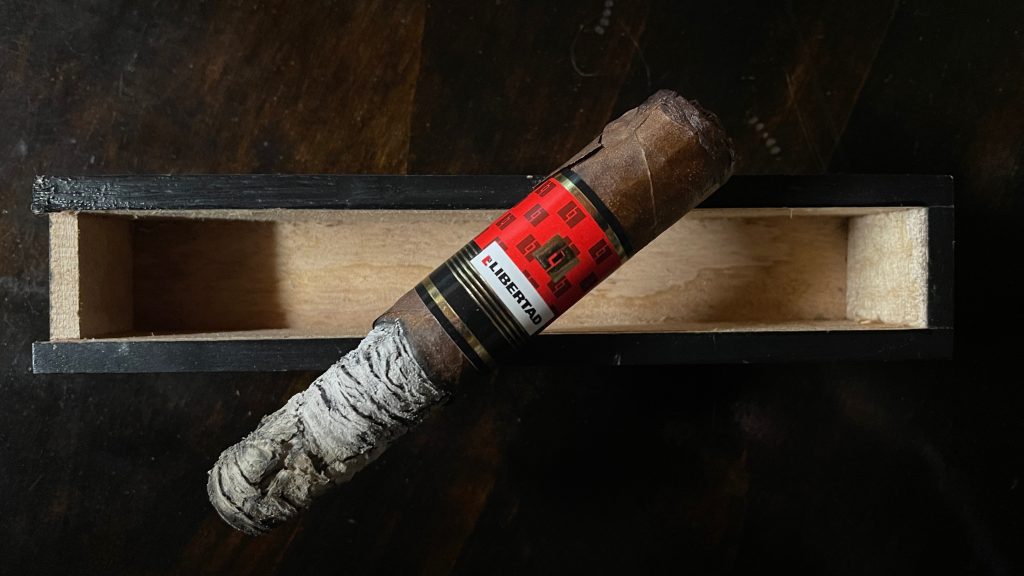 Now that La Libertad is finally smoking like a cigar and not like a chicken bone, a touch of vanilla creeps in at the tail end of the retrohale at the start of the middle third. The vanilla gels nicely with the mineral, oak, and now muted pepper. In fact, I’m of the opinion that the only thing keeping that diminished spiciness around at all is the introduction of the rye whiskey to my palate. Ryes are typically more spice forward, as compared to my beloved naturally sweet bourbons, so the Jack Daniel’s seems to be benefiting the overall smoking profile as a pairing partner at this point. If only my fellow TNCC brothers could piece together a pairing like this every once in a while we might’ve ourselves the making of a podcast or something… The draw’s core flavors are now leather and coffee with the earthiness all but gone by the fifty yard line. I accidentally sliced the wrapper with the band when sliding it down for a photo so any issues in that regard I’ll take the blame for, or should I say Mr. Daniels will accept responsibility. 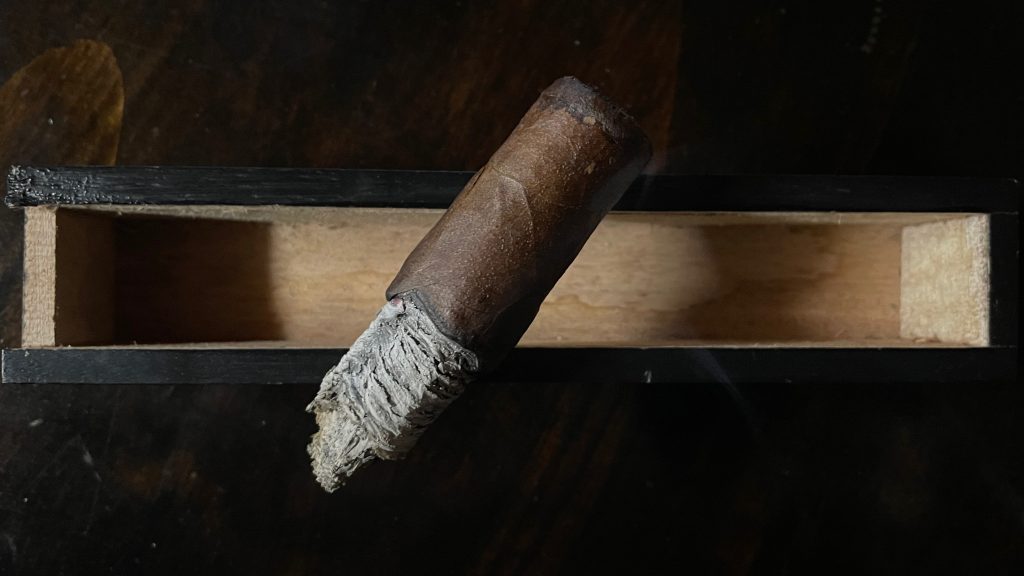 Construction wise, La Libertad is performing fine and has been overall satisfactory ever since the severe draw issue early on with a now smooth draw, strong ash, and copious smoke production. All the previous notes of vanilla, mineral, and oak remain present through the nose although they are all equally dialed down a bit in the final third. The coffee flavor has begun to outshine the draw’s leather as well. This is a cigar in which you’d be doing yourself an injustice by not retrohaling as that’s where La Libertad’s best notes play loudest and clearest. 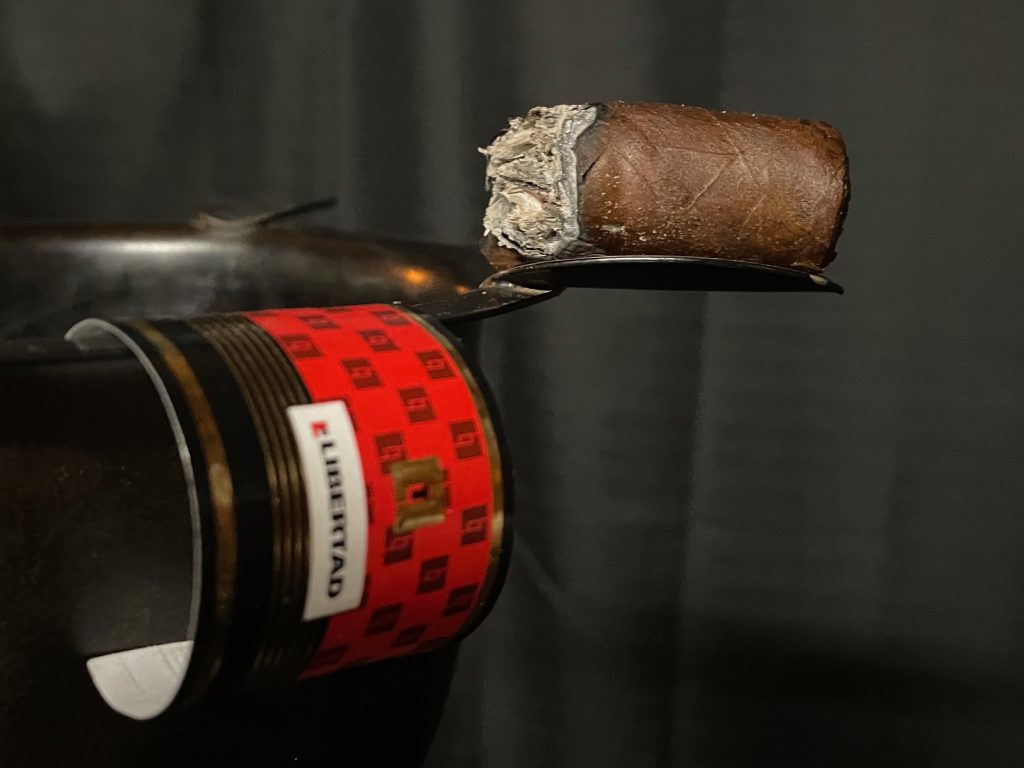 I can honestly state that it sucks that I only had one robusto to sample tonight because, despite all the early construction issues, by the end of La Libertad’s final act I didn’t want put it out. If you happen to experience a tight draw early on, just pour some rye whiskey and have a little patience – trust me. The consistently enjoyable flavors that continuously transitioned nicely back and forth in their prominence over the course of 68 minutes was a real plus for me. I was sent a larger Gran Toro size as well, so report back here in the future to see if my hunch that La Libertad will perform much better in a larger vitola rings true. I can guarantee you, however, that this bottle of Jack Daniels won’t live to see that day… or tomorrow morning for that matter.

Everything in moderation, folks, including moderation.