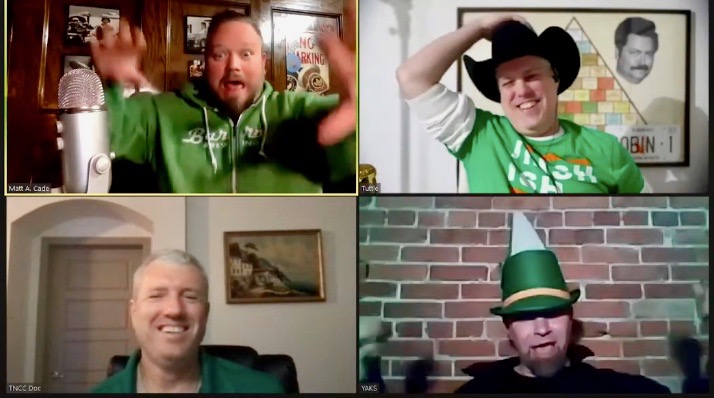 Before we get started tonight I’ve got a bit of BREAKING NEWS to share with everyone. I, Matt A. Cade, chairman-in-chief of The Tuesday Night Cigar Club have just issued a No Fly Zone order for the air space directly above The Corner Of No Hope here in Central Texas. As of this evening at 9pm CST any Russian aircraft that dare fly over The Corner Of No Hope risk seeing me standing outside taking a rockin’ piss while giving their pilots two incredibly passionate middle fingers. You’ve been warned, God bless the Tuesday Night Cigar Club and God bless America! 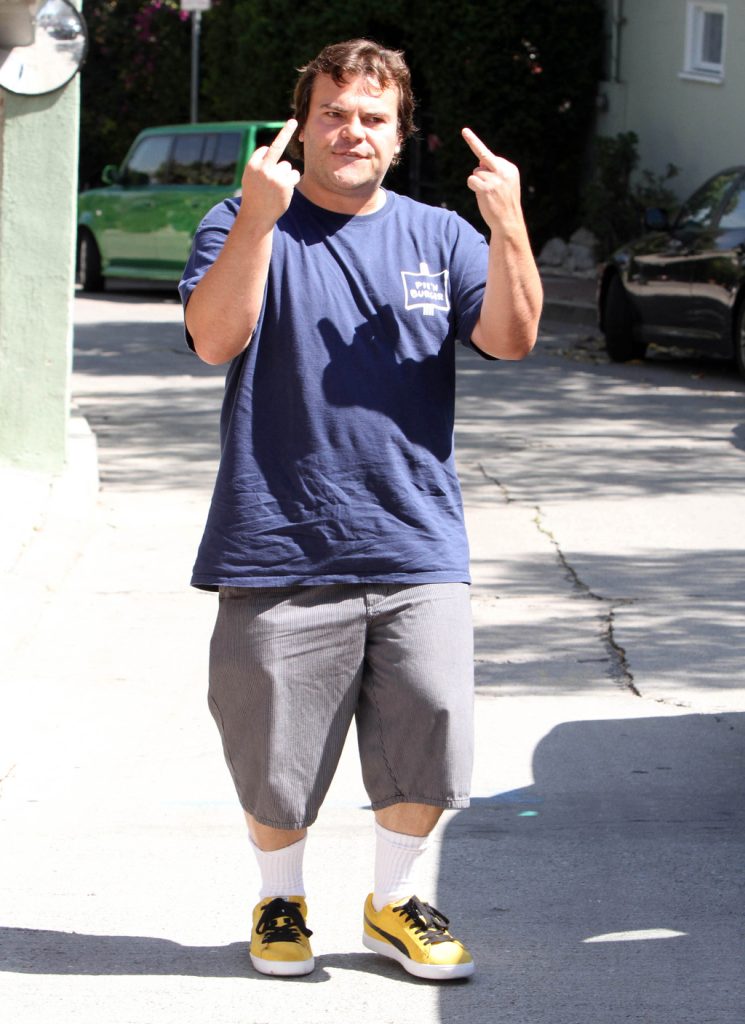 Welcome everyone to The Tuesday Night Cigar Club episode 153! It’s our 7th Annual St. Patty’s Day Drinking Bonanza & Then Drinking Ridiculous Amounts More Celebration Extravaganza! Or some crazy bullshit like that. You party people ready to party? Let’s do it!

Ceathair is a candela robusto blended by Sebastien Deccopet specifically for Smokers Abbey in Austin, TX (Tut’s home shop). Ceathair is gaelic for “four” and pays homage to Smoker’s Abbey proprietors Ian & Rebecca’s Irish heritage. They are good people which is clearly evident by how nice and accommodating they are to Tut, repeatedly, which is no easy task. 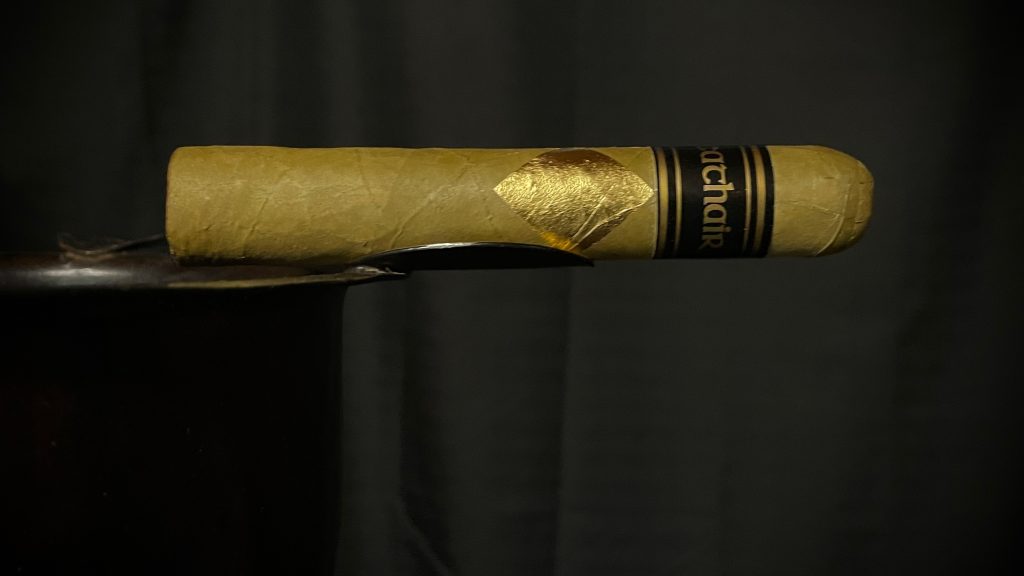 The Genève Ceathair features a musty aroma when sniffing the light green body, it reminded us of the pages of an old book that hasn’t been removed from the library shelf in years (that’s a fantastic smell in case you were wondering). The cold draw is extremely vegetal and grassy, both Tut and Yak Boy detected some sweetness as well. The aroma pouring from the Genève Ceathair upon torching the foot reminded me of the smell in the air immediately after a string of firecrackers has just exploded. How’s that for odd and specific? There’s a mild/medium white pepper that’s easily detected through the nose and a very faint, light coffee note coming through via the draw. Throughout the first half, a faint woodsy element appears on the retrohale which dances nicely with the consistent pepper and a unique saltiness slowly begins to emerge as well. 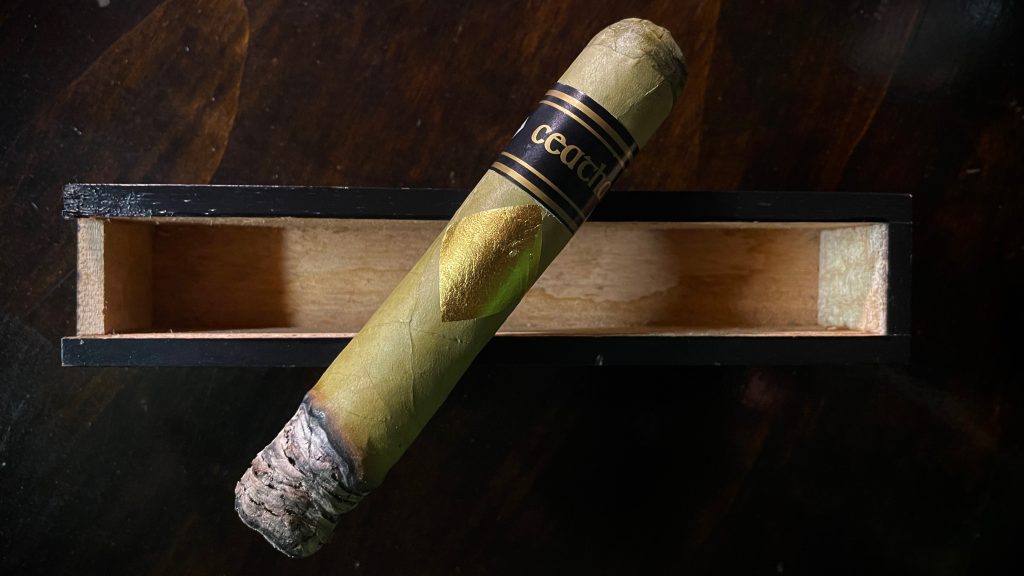 In the second half, the strength of the retrohale’s pepper spice elevates to solely medium territory and the salty, light coffee becomes more pronounced on the draw. Once the gold diamond adorning the wrapper leaf begins smoldering, a healthy dose of Nicaraguan mineral appears on the retrohale and it plays very well with the pepper and woodsy note. Construction has been fantastic from start to finish with a smooth draw, straight burn line, strong ash, and it has required zero maintenance whatsoever. 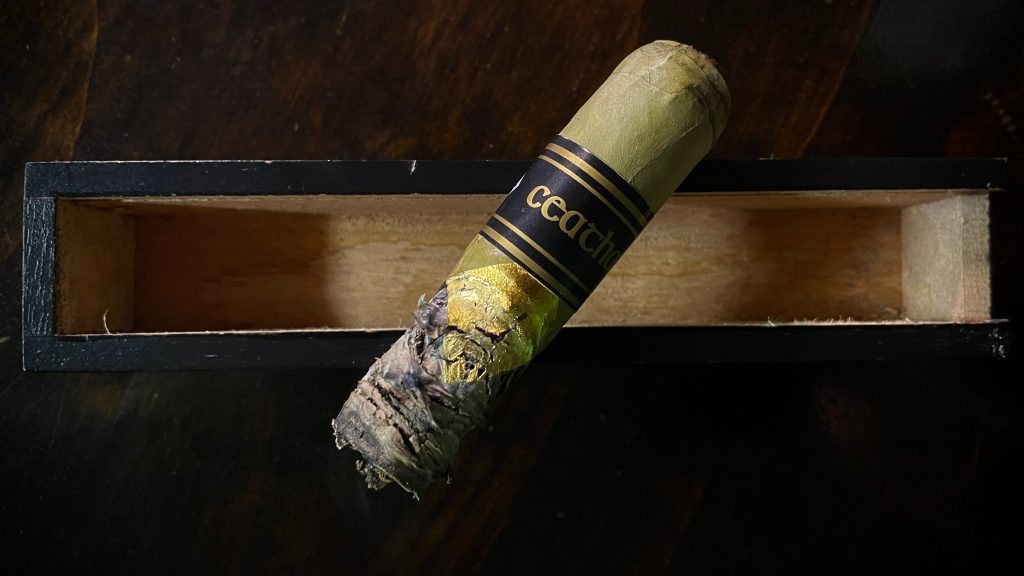 It aint easy being green but the Genève Ceathair is an extremely smooth, mild-to-medium cigar that delivers several flavors that are certainly atypical of most traditional candela offerings. Enjoyable notes of light coffee, woodsiness, and an awesome salt presence are joined by a Nicaraguan twist in the final act where we see an increase in strength and the addition of some mineral which only adds to the stogie’s already enjoyable profile. If all of this sounds good to you ~ which it certainly should ~ get your ass over to the Smoker’s Abbey website, order up a few of these green suckers, and let us know what you think! 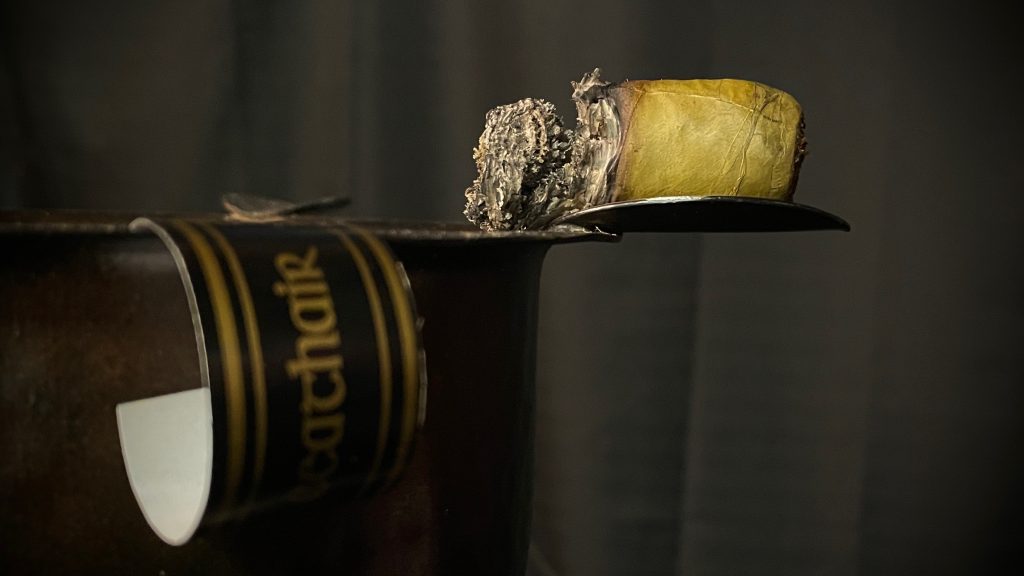 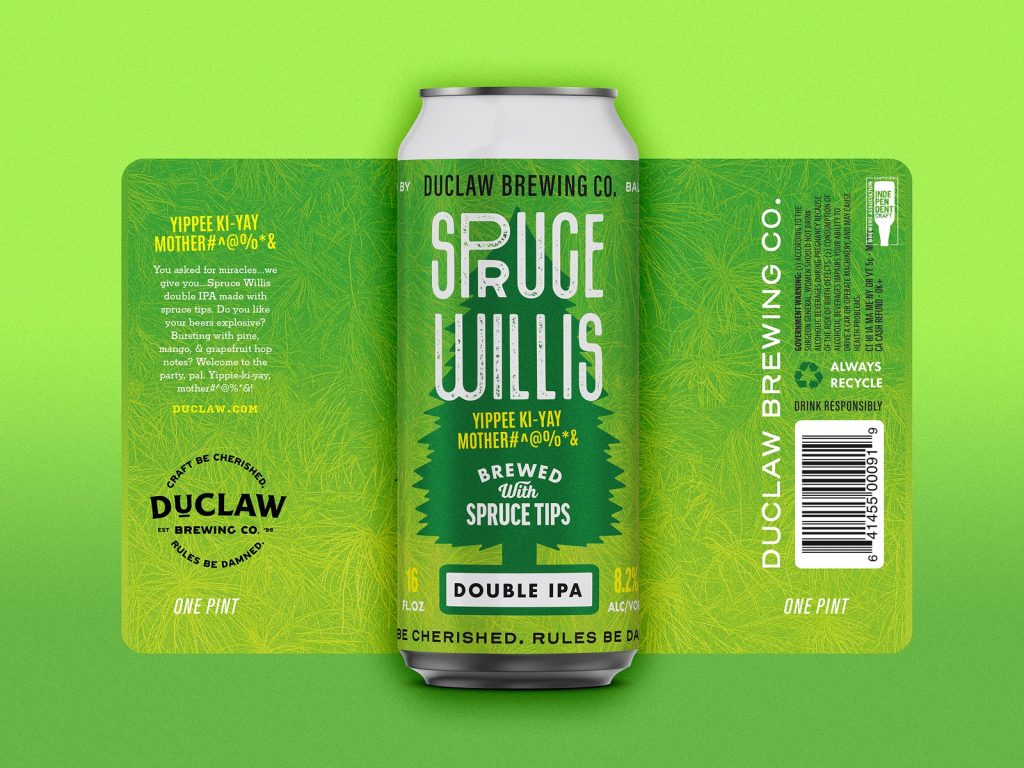 Yippee Ki-Yay Motherfuckers! At 8.1% and 50 IBUs, this pine-forward bad boy might just be the most inspired and impressive pairing that we’ve ever featured on the show in 7 years. It’s ultra green, it’s action movie ready, it’s honestly pure genius from a pairing standpoint. Mango and cantaloupe make up the fruit side of the beer’s profile and those flavors balance the wintergreen aspects of the Spruce Willis quite well. And it’s a delicious, easy drinking IPA that paired extremely well with tonight’s cigar! So all you other cigar-booze pairing mofos can kindly see yourself to the door now, it’s over as this is undeniably the greatest pairing of all time, I win.
CADE’S PAIRING GRADE = A+++ 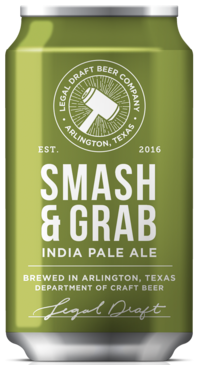 This single malt, single hop smash IPA reports in for jury duty at 6.1% and 70 IBUs (The Doctor felt this number was a bit high). There was a lemony Palmolive dish soap flavor found on the back end of the Smash & Grab that didn’t agree with The Doctor’s taste buds but he admitted that he might have just not rinsed his pint glass adequately after hand washing it. We suggested that perhaps next time he use his dishwashing machine instead, as he’s been experiencing that lemony dish soap aftertaste in beers a lot lately, and he diagnosed us all as crazy for even suggesting such madness. On a side note, Legal Draft (who name all of their beers based on legal terminology) has contacted me personally about collaborating with them on a new beer called the Hung Jury Milk Stout*. So stay tuned!
THE DOCTOR’S PAIRING GRADE = C- 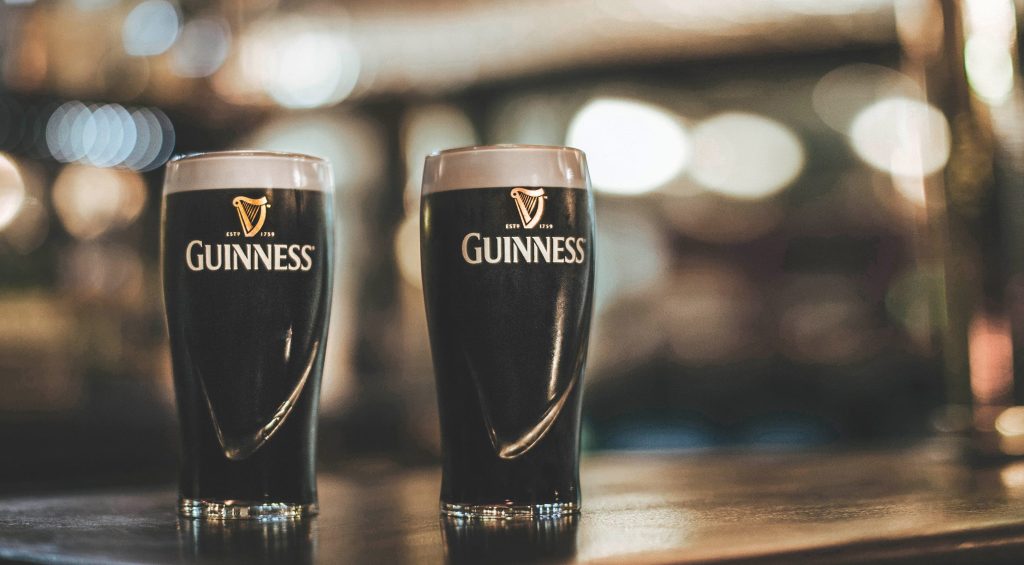 We all love Guinness, everybody loves Guinness. Starting way back in 1759, Guinness deserves all the praise it has ever received and it pairs beautifully with almost every cigar we’ve ever saddled up with it. And this is our massive St. Patty’s Day Drinking Bonanza Shitfaced Extravaganza after all, so both Tut and Yaks (while lazy) get an obligatory A for their pairing grades. If you smoke a cigar that tastes bad with Guinness, you’ve simply got yourself a bad cigar. 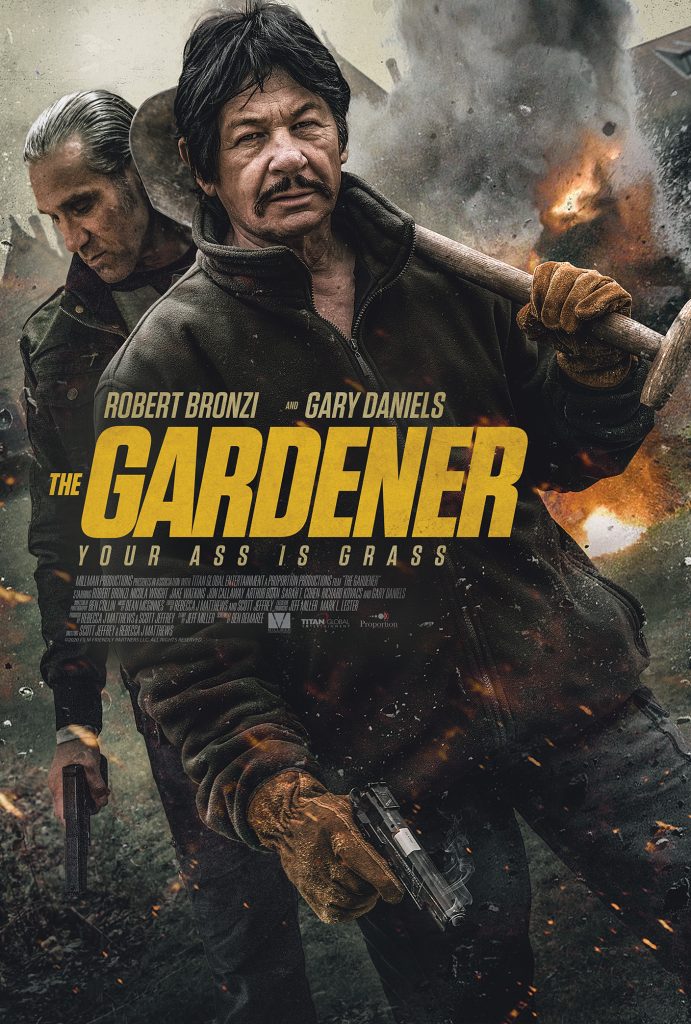 Tonight’s screenplay was written by Ben Demaree from a story by Jeff Miller (Miller was an executive producer on the very first Bronzi movie Death Kiss which we featured wayback on Episode 91 as well as Bronzi’s subsequent flicks Once Upon A Time In Deadwood, Escape From Death Block 13 which we discussed a few months ago on Episode 149, Exorcist Vengeance fuck yeah that’s a thing that exists, and our film this evening The Gardener). The Gardener is co-directed by Scott Jeffrey (who you might know from directing the horror movie Clown Doll that we talked about on Episode 140 or perhaps 2021’s The Curse Of Humpty Dumpty) and Rebecca Matthews (who was a producer on Clown Doll and she’s also producing the recently completed Curse Of Humpty Dumpty Part 2: Even Dumpier). 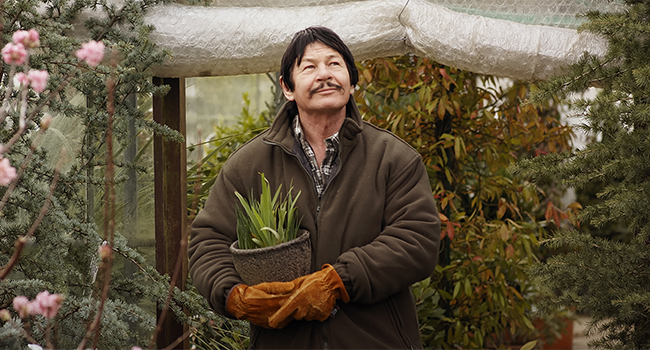 And, of course, The Gardener stars the one and only Robert Bronzi as the titular character. You can listen or watch tonight’s show down below to get our full thoughts on this movie but I’d like to put one thought out there now and film producers please read these next few sentences carefully – You have a potential golden goose in Bronzi that won’t stop shitting cinematic golden eggs IF AND ONLY IF y’all go back to dubbing over his voice with a talented Bronson imitation (I work cheap FYI). Just looking like Charles Bronson isn’t enough anymore, not by a longshot… punks. So did we enjoy this latest Bronzi adventure? Click on the links BELOW and find out! 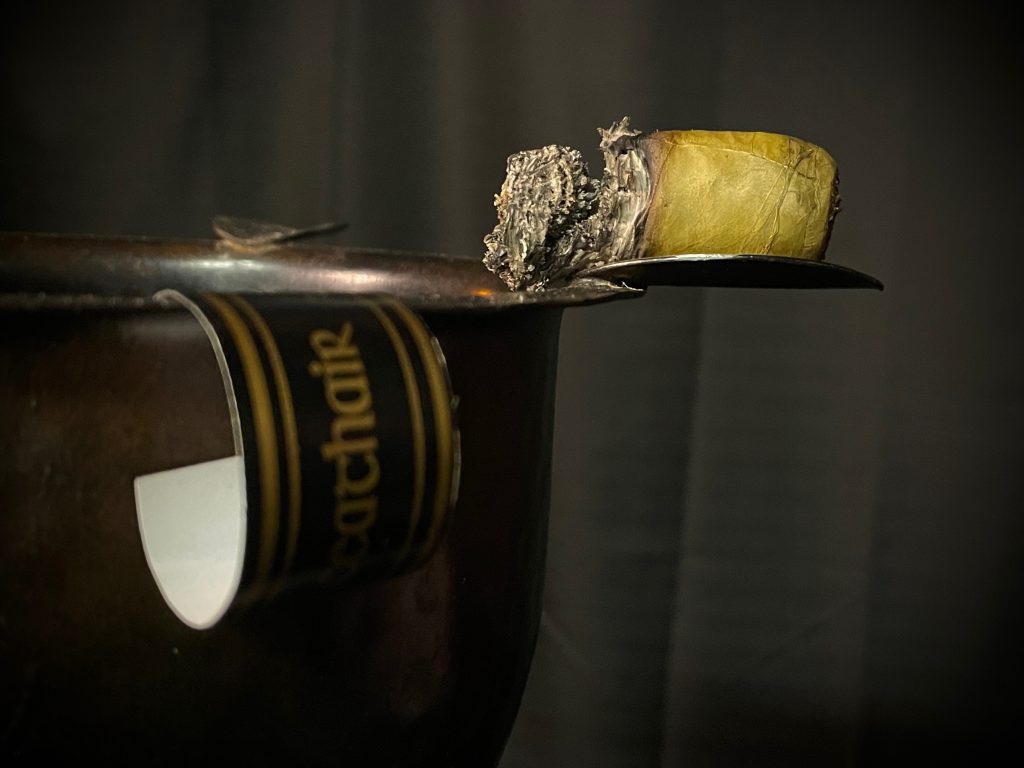 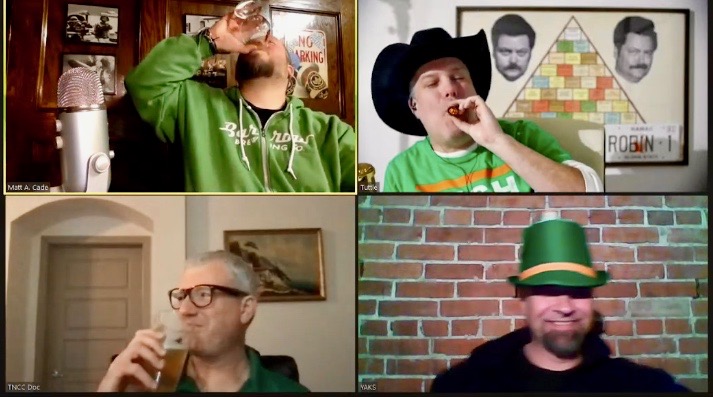 * Legal Draft Beer Company actually hasn’t contacted me regarding a Hung Jury Milk Stout collaboration but they should.