I LOVE John Carpenter. Like I seriously love the guy. He created the essential vital stories that ruled my formative years and his influence in my...

I LOVE John Carpenter. Like I seriously love the guy. He created the essential vital stories that ruled my formative years and his influence in my life goes far beyond that. As a filmmaker I am simply in awe of the man. In the photograph taken with him above I could barely breath.
I LOVE Drew Estate cigars. Other than their infused offerings, of which I’m not a fan, I regularly indulge in DE sticks far more often than any other brand. Drew Estate’s founder Jonathan Drew (pictured above on the right) is someone I look up to as a role model and I don’t really do that very often. His “Fuck Making The List, Make The Legacy” approach to his life, his art, and his business is something I relate to on a very personal level in everything I do. And he’s a really good dude on top of all that.
I also LOVE interesting complex beers. If I’m going to cheat on my beloved bourbon with a sudsy whore poured from the O’Briens Irish Pub’s tap o’ sin I want her to be amazing, delicious, and never boring.

I LOVE this week’s podcast because all these elements came together in one beautiful magical night. It was the most fun three dudes could have while keeping their pants on. Or their dress on… but more on that later.

Tonight we smoked the last blend in our ongoing conquest of the Drew Estate Smoking Monks. While the Stout and the American IPA blends wowed the group with their ability to enhance the craft beers they were rolled to accompany, last episode’s Porter sadly came up a bit short compared to its Monky brothers. I really wanted to end this series on a high note so I was encouraged when all three of us at the table remarked on the impressive construction of the Hefeweizen’s beautiful Connecticut wrapper and the natural sweetness and vanilla aromas that were both present when smelling the foot of the cigar prior to lighting.

Complex, sweet, and creamy. These were the three adjectives mentioned over and over again during the podcast. While the boys got a sweet cream note early on, I was getting more of a coffee creamer vibe which I definitely like. The cigar had some smooth transitions and was never boring which paired perfectly with tonight’s beer as it had those same qualities and then some. The underachieving Porter cigar was boring in that, while not a bad stogie at all, it just seemed to play the same note throughout its duration unlike the other Monks we had sampled up to that point. I’m happy to report that the Smoking Monk Hefeweizen was a winner across the boards. We really talk a lot about the cigar and its relation to tonight’s beer on the podcast because we were all very enthusiastic from spark to finish. You should listen to it, you won’t regret it.

Let me just take a moment to acknowledge how lucky the TNCC is to have a pub like OBriens to introduce us to some beverages that we would most likely never discover on our own. Their bartenders and staff have a keen talent to sense what your personal preferences are and then lead you into new beer experiences without ever turning you off. Karbach’s Weisse Versa Wheat is a shining example of that.

Literally, the beer is so golden yellow that it shines. Karbach’s innovative attempt at marrying the flavors of a Bavarian hefeweizen with a Belgian white is a fantastic success from the very first sip (of which there were many as this beer goes down extremely smooth). The unique mix of citrus and spices really gelled into something we all were impressed by. My rule of “never boring” was adhered to for sure. Although you’ll hear, as you listen to the podcast, that I was frequently mocked and labelled bananas because I routinely picked up on the flavor of bananas in the beer while no one else did. To each his own of course, but I personally think anyone who doesn’t give this beer a shot is fucking bananas.

Besides having some of the coolest poster art ever made, Escape From New York just happens to be one of the coolest movies ever made. That’s a fact that cannot be debated, at least not at the pub. But seriously – HOW DAMN COOL ARE THESE POSTERS?

I truly think we cover just about every angle of the film and the filmmakers involved with Escape From New York on the podcast. I’ll admit that I get a charge discussing John Carpenter films and when you mix in a great cigar and some tasty beer we kinda go nuts. Or bananas in my case. It’s also through this lively interaction that we sometimes discover new things about our TNCC brothers, fun facts (i.e. dark disturbing issues) that otherwise would remain a mystery to us forever.

The stunningly beautiful and talented Adrienne Barbeau. What man could resist her charms? Besides Tuttle that is…

For instance, we learned on this episode that Tuttle doesn’t find Adrienne Barbeau attractive (from the neck up of course) because he’s reminded of himself when his hair grows out and begins to curl.

YIKES!!! I apologize in advance for the nightmare imagery* I just implanted in your brain but welcome to the party pal! Is it just me or does “Tuttle Barbeau” look like every street prostitute ever arrested on the show COPS? Especially the Dade County Florida episodes.

Where tonight’s conversation really got lively was when we dug into Escape From LA. Of all Mr. Carpenter’s films I’ve probably revisited this film the least but I knew leading up to tonight’s show that Tuttle was a vocal fan so I was more than curious to get his take on it. I’m really proud to say that we uncovered some aspects of EFLA that I hadn’t heard touched on before and I’m not just talking about Bruce Campbell’s uncanny resemblance to Bruce Jenner. Double Yikes!!!

It’s an easy film to dismiss as a failure on the surface but some very interesting points were made that have me now looking at EFLA in an entirely new light. Anyone interested in Carpenter’s methodology and the history behind all the factors that went in to making this crazy film what it is should sit back with a drink, light up a smoke, and enjoy the show. If you listen and end up digging the podcast you’ll get a big high five from me next time I catch you out on the waves dude!

Sorry, I couldn’t resist. Also, the movie has a fucking NET GUN in it! So that there is really the only reason you need to watch this sucker again. Because net guns are awesome and it’s total bullshit that they only exist in scifi movies.

I truly hope the energy and passion that the TNCC felt during tonight’s discussions carries across to you, the listener. When we say we like a cigar we mean it and when we compliment a beer we mean it. And when I say that I walked away from the pub balcony appreciating Escape From LA more than I thought previously possible I absolutely mean it. I was perhaps harsh in my initial analogy when I compared viewing EFNY to watching a sweaty dangerous 1988 Axl Rose perform on stage contrasted against EFLA which I felt more delivered the vibe of watching a 2015 Axl Rose perform in Vegas. Same guy for sure, very familiar in so many ways, but oh such a difference the years and success has made… 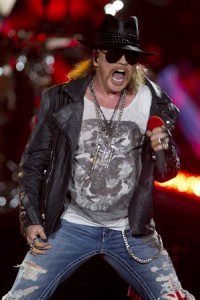 There’s more to Escape From LA than meets the eye on first glance so I encourage you to revisit it with an open mind. I hope you dig our reviews of the cigar, the beer, and the film. I think that the show is getting stronger each week and I highly encourage you to check out our YouTube page for dozens of highlight clips from each episode including this one. There’s a ton of great stuff on there and I’m not just saying that. I swear.

* Special thanks to our old friend and silent member of the TNCC, Mr. Dustin Younse, for creating this hellish piece of nightmare imagery.