I am afraid that untold numbers of people across the globe who perpetrate these acts, be it terrorism or raping the earth, are either too stupid to recognize a representation of themselves in a movie or just don’t give a shit in any case. 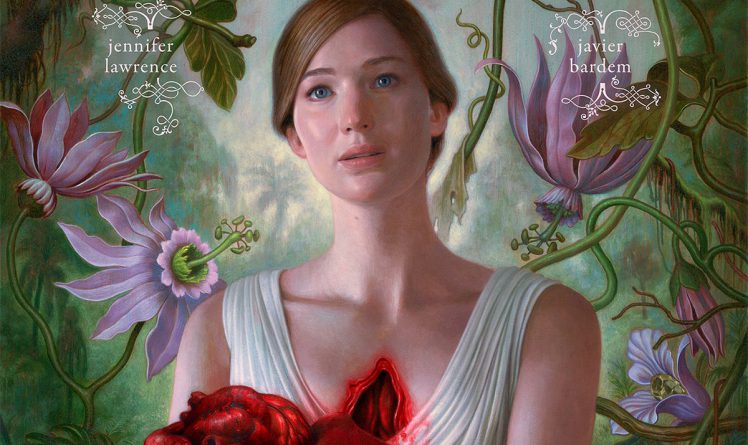 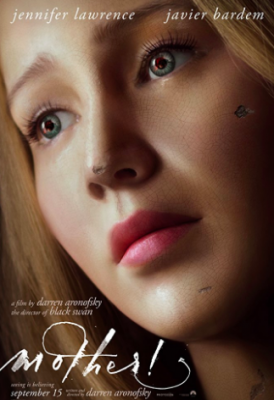 Another school year has begun anew across the American heartland, bringing with it the change of seasons and the promise of football. Most importantly, it marks the time of the year when your favorite Doctor can begin leaving the office early to attend 4 PM movies on weekdays, as there is virtually no one else attending shows at that time. Being an analytical man of science, I prefer to watch movies in something that comes close to approximating a laboratory environment. I had to choose between a movie starting at 4:10 on a Tuesday and one starting at 4:20, and I ended up seeing the latter, a matinee of Mother! (There is an exclamation point in the title, for ye of short attention spans. I will not be using the exclamation point for the remainder of the review unless I need to express emotional EMPHASIS!)

Well, where to begin… First of all, Mother is not a horror movie, even though the limited trailers I have seen tried to more or less paint it that way. I am sure that everyone knows by now that Mother is a religious allegory/metaphor as well as a morality play of sorts. This makes it difficult to review as if it were merely a movie but I’ll try…

A nameless man (Javier Bardem) places an ornate type of crystal rock onto a shelf in a dilapidated house. This tiny act immediately transforms the home from a rotted crap-hole into a lovely, if somewhat old, multi-story country manor. At the same time, in the main bedroom of the home, a pile of ash morphs into the figure of a young woman (the lovely Jennifer Lawrence.) They are husband and wife, and I suppose if we can believe that, then we can believe anything. At least there is an “I Thought She Was Your Daughter” joke before too long. Sorry, Javier. 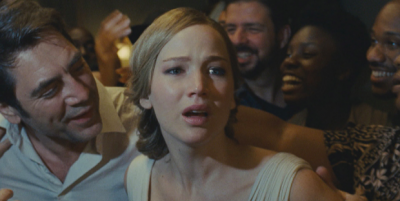 A stranger played by Ed Harris arrives, having been lead to believe (or so he says) that he thought the old manor was a bed and breakfast. Now, I don’t know about the rest of you, but when someone knocks on the door of The Doctor’s metropolitan pad, I usually have a slight panic attack before answering the door. When I finally realize my dream of moving to a pseudo-isolated farmhouse in a pastoral meadow somewhere, I am going to cease answering my front door altogether, much less invite in strangers for tea and crumpets. Lawrence is understandably incredulous, but her kindly husband invites the guy in, makes him a drink and tells him he can stay the night.

It turns out that Stranger Harris (no one ever uses or says an actual name in Mother) recognizes Bardem as a great poet whose work and words have meant so much to him (yet another clue — the viewer gets hit over the head with them.) Bardem shows Stranger Harris the lovely crystalline artifact from the film’s first scene that he claims was given to him by his wife, providing him with fresh inspiration. I see…

The next day, the stranger’s wife (the still very sexy Michelle Pfeiffer) arrives followed not long thereafter by their two arguing sons. Lawrence is nonplussed to find out that her husband invited them! The entire proceedings are certainly off-putting, I’ll say that much. One son bashes the other over the head, a scene which serves as a modern-day retelling of Cain and Abel. Bardem and the parents rush off with the mortally wounded young man, leaving Lawrence to fend for herself. Mother could have moved into a home-invasion type horror film if it wanted to, but in truth it was already too late by that point. For those who haven’t read anything about Mother yet, Bardem’s character is a thinly-veiled version of the Christian God and Creator. Lawrence is Mother, or more specifically Mother Nature or the Earth Mother. Harris and Pfeiffer are Adam and Eve. If one wants to read further between the lines, one can reasonably infer that Harris-Adam confessed loneliness to his Creator who then removed one of Adam’s ribs to make Eve, who shows up the next day in the form of a slutty, booze swilling Pfeiffer.

Mother Nature’s earth, before everybody shits in it.

This is where things get difficult for The Doctor, because it is impossible to review Mother and offer opinions on the film without offering opinions on the subject matter represented. For most of my adult life, my general attitude has been that a person should do whatever he or she needs to do in order to be happy, as long as this doesn’t involve hurting anyone else. For example, while I believe in God and a Creator, I don’t care if anyone else does or does not. Also, I do not practice organized religion but I certainly have no problem with anyone who does, be it Christianity, Islam, or Jamaican Voodoo. (Just leave me alone to do what I want, fair?) I offer my apologies for this disclaimer but I felt it was necessary because I just didn’t find Mother all that interesting as a movie. I know what is in the Book of Genesis. If I want to read up on Creation or Adam and Eve, I will pick up the Good Book or seek out a religious treatise somewhere. But when I go to the movies, I want to be entertained, and AS ENTERTAINMENT I found Mother to be a hard pill to swallow. That doesn’t make me or anyone who agrees with me the Anti-Christ. It is just an opinion about a movie. 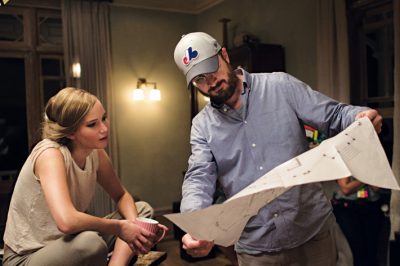 Director Darren Aronofsky and actress Jennifer Lawrence on the set of “Mother!”

At this point the film slightly morphs from a biblical allegory into a metaphor of how mankind has horribly and selfishly punished, broken, and violated the earth that we dwell upon. The rambling manor that Mother Nature and The Creator share represents Earth, and it is treated with criminal disdain leading towards outright destruction by the never-ending stream of uninvited, senseless visitors who are quick to devolve into violence. It is almost as if writer/producer/director Darren Aronofsky is hinting that the Christian tenets of open-door kindness to strangers and limitless forgiveness are recipes for disaster, and if he indeed was trying to convey that, then I congratulate him for his courage.

We are treated to a series of images that are metaphors for the ridiculousness of celebrity worship and idolization and how dangerous humans can be to each other whether this involves police brutality, warfare, or the mob mentality of the herd. It is a vile flash pan of reminders about how terrible the world is and how much people suck… to which I say, Well, Duh. I already knew that. Pick up a newspaper and you’ll see how shitty things are. Is Mother trying to teach us something? Because it didn’t teach me anything I didn’t already know. Perhaps I missed the boat, perhaps it wasn’t intended for conscientious, non-violent, binge drinkers like myself. Unfortunately, call me crazy (and some do) but I am afraid that untold numbers of people across the globe who perpetrate these acts, be it terrorism or raping the earth, are either too stupid to recognize a representation of themselves in a movie or just don’t give a shit in any case. It would be great if people saw something here that made them want to be better people and kinder towards each other and the environment, but I didn’t fall off the hay wagon yesterday.

As far as the environment is concerned, The Doctor had a lady friend many moons ago who was studying marine biology and summarily informed me that the planet was irreversibly fucked and there was nothing that was ever going to be done to fix it. However, it made her feel good to try, so she employed reusable canvas shopping bags and fluorescent light bulbs. She knew it didn’t matter, but it made her happy, so what kind of an asshole would I have been to point out the fallacy of her actions? Don’t answer that. Hmmm, I fully intended to not get on a soapbox and there I went and got on one…turns out I am an asshole after all, but then faithful friends of The Tuesday Night Cigar Club already knew that.

Getting back to the finer points of the movie, kudos to cinematographer Matthew Libatique. Mother couldn’t have been easy to shoot and it looks wonderful. All of the acting is top-notch, particularly Lawrence but also Bardem. His Creator is almost blasphemously naïve and infuriating, but his performance delivers. Pfeiffer is great and probably needed to be in more scenes. And, to be fair, Aronofsky has to be given credit for tackling the concept. In today’s world of message-board vitriol where people threaten each other with bodily harm if they disagree about the possible outcome of a football game, anyone who broaches religion or politics is going to have many a detractor. Everyone gets an A for effort. I don’t want to straddle a fence, so I will say that I didn’t need to see Mother and wish I had chosen something else, but I think that the subject matter is such that it is best to see it for yourself and form your own opinions. Just don’t go expecting any of the destructive assholes in the world to see it and then change their ways. After this, I need something lighthearted which probably will not happen as I believe that Stephen King’s It is next on the docket. Maybe I should see Dumbo. Yes, the one about the elephant. As always, my friends, The Doctor wishes you all a clean bill of health.