What is your favorite Quentin Tarantino picture? I generally detest being asked to name my favorite ANYTHING although I accept that one cannot be involved in a serious form of film critique or study without having to make some lists. However, The Doctor stands by his decision to not name a favorite. I don’t worship at the Tarantino altar – as a man of medicine I choose not to engage in idolatry – but the Tarantino filmography is too wondrously diverse for me to ever make a choice. I remember a damp evening in the autumn of 1994 when I viewed Pulp Fiction for the first time on the big screen and knew that I was seeing something completely different from anything that I had seen previously. And that was before The Gimp showed up on screen. There are some who have opined that QT had lost a little of his verve with his last two entries, Inglourious Basterds and Django Unchained, but not me. The man just makes entertaining movies that draws the viewer into a universe that he or she doesn’t want to leave. The Hateful Eight is certainly no exception, and while I can’t definitively say it is my favorite Tarantino film, it is right up there. 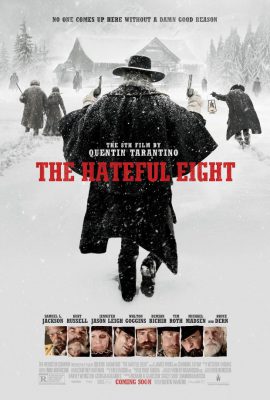 The Hateful Eight is the 8th film by Tarantino – we’re reminded of this fact in the opening credit sequence – and it doesn’t fail to deliver on the weighty, if not unfair, expectations associated with any QT release. It’s an unflagging three hours featuring tour-de-force performances by Samuel L. Jackson, Walton Goggins, and Kurt Russell. Actually, all of the performances are nothing short of top notch. As usual, there is something about the dialogue that Tarantino writes and the environment that he creates that seems to give actors license to flourish. Mind you that these players are vastly experienced and talented actors in their own right. Tim Roth helped Tarantino get on the map with his performances in Reservoir Dogs and Pulp Fiction, and what can be said at this point about Bruce Dern? The man is an acting legend whose career stretches back over 6 decades. Tarantino acolytes have come to expect Sam Jackson to bring his A-Game which he does so deliciously here. 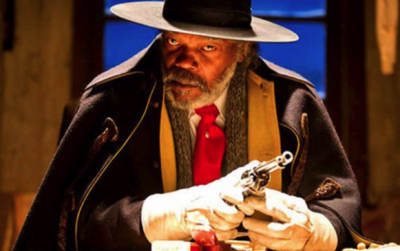 “And you will know my name is the Lord—“ oops, wrong movie. Samuel L. Jackson as Major Marquis Warren.

Fans of the television show Justified, like yours truly, will not be surprised at Goggins’ performance as a gleeful southerner on his way to begin his new occupation as the sheriff of the town of Red Rock, or so he says… Therein lies the central motif underlying the film’s action, a paranoid sense that somebody – or nobody – is who they seem to be. Or are they? Here’s the briefest of synopses, spoiler free:


Russell, evoking a western, tough guy badass that we first saw displayed twenty years earlier in Tombstone plays John “The Hangman” Ruth, a no-nonsense bounty hunter in the post-Civil War frontier of Wyoming. Ruth is hell-bent on bringing his captive, wanted killer Daisy Domergue (a bravura Jennifer Jason Leigh) to justice and collecting his $10,000 reward. Justice in this case being the noose in the town of Red Rock. Riding by stagecoach in a panoramic snow covered vista and staying one step ahead of a ferocious, oncoming blizzard, John Ruth and his prisoner reluctantly take on two other waylaid passengers, fellow bounty hunter Major Marquis Warren (Jackson), himself on the way to Red Rock to collect $8,000 for his three dead bounties, and Chris Mannix (Goggins) the soon-to-be sheriff of Red Rock and son of a noted Confederate renegade. 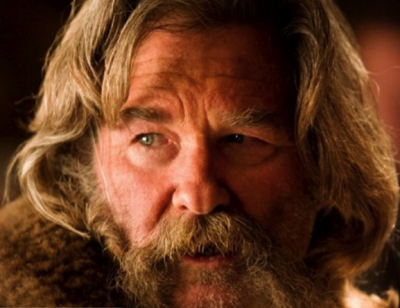 The wondrous, ageless Kurt Russell as John Ruth. A recent informal TNCC discussion focused on where Russell fits in the pantheon of western actors. After Tombstone, Bone Tomahawk, and now The Hateful Eight, it is a legitimate discussion.

The weather forces the travelers to take refuge at the remote Minnie’s Haberdashery, a darkened sort of lounge/bar/general store/way station on the road to Red Rock. For my fellow linguaphiles, the word haberdashery has its origins in the 15th century Middle English where it is first recorded with the spelling of “haberdashyre.” Minnie is gone and has suspiciously left her haberdashery in the care of Senor Bob (Demian Bichir.) Also waiting out the blizzard in Minnie’s are Englishman Oswaldo Mobray (Roth) who claims to be the new hangman for the town of Red Rock, retired Confederate General Smithers (Dern) and reputed cowboy Joe Gage (fellow Tarantino stock company player Michael Madsen.)

If The Doctor’s recollections are correct – and, admittedly, one can never be too sure – I believe that on different occasions both Brad Pitt and Christoph Waltz referred to Tarantino as a modern day Shakespeare. The comparison, in my mind, is not gross hyperbole. The majority of The Hateful Eight takes place within the confines of Minnie’s Haberdashery and as such could have made for an epic stage play, albeit a profane and violent one.

Who is in cahoots with whom? Is anyone in cahoots with anyone? And why is it so much fun to say and write the word cahoots? The Doctor once went cahooting with TNCC head honcho Matthew Cade. We were attending the fifth annual Texas Frightmare Convention at the Sheraton Grand in Dallas. The 1957 Plymouth Fury from the movie Christine was on display. Cade and I were both deeply into drink by the early afternoon, so when I suggested that we boost the Fury and take it for a joyride for research purposes, Cade quickly agreed and proceeded to hotwire the car. But I digress, that story of our cahoots is for another time.* 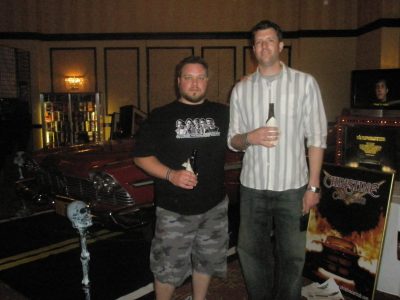 While Tarantino is certainly a man apart, The Hateful Eight is decidedly a revisionist western. So was Django Unchained for that matter. Who are the Good Guys? The truth of the matter is that in the real old west, the distinction between good and bad was often blurred. Stout Christians didn’t ride in on a white horse to save the virgins from the savage red man. John Ruth and Marquis Warren are the main protagonists, but they are also bounty hunters, men who make their living by killing, or in the case of Ruth and Daisy Domergue, taking the fugitive to be killed. Suffice it to say, The Hateful Eight gets a winning endorsement from The Doctor. I loved it, and look forward to seeing it again. The QT fanbase has certainly already seen the film, and so too most fans of westerns, but I wholeheartedly recommend it. You will enjoy the ride, you will absolutely love the performances, and you will try to figure out the mystery, although I am not sure that any real clues are given. Tarantino once stated that he figured to be done with filmmaking by age sixty as it was a younger man’s game. He recently turned fifty-three. If he hasn’t changed his mind about retirement, then let’s at least hope that he gives us a couple more films before he rides his own gilded stagecoach off into the sunset. Do yourself a favor and see The Hateful Eight. As always, The Doctor wishes you all a clean bill of health.

*OK, I couldn’t wait to tell the cahoots story. I had misplaced my glasses due to whiskey consumption, so Cade had to perform the hotwiring. Holy armadillo shit, folks, they don’t make them like they used to! Cade barely tapped the accelerator and the Fury leapt off of the ground like a cheetah. That machine could flat out run, a thankful necessity considering that many people were chasing us and screaming as we tore around the convention hall. It had dual exhaust pipes, a Hurst gearshift on the floor and a glasspack muffler that rumbled like a lumberjack’s chainsaw. We almost ran over Margot Kidder as she emerged from the ladies room. The Doctor’s lawyers, kept on constant retainer, were able to get the charges dropped by successfully arguing that both Cade and myself had been impaired due to asbestos inhalation and that what transpired had been “an unforeseen turn of events.”
Tags
Christinefilm reviewQuentin TarantinoThe Hateful Eight
Categories
Beyond The Pod
SHARE THIS ARTICLE
OLDER ARTICLE

Our Statement Regarding the FDA and the Premium Cigar Industry