One must remain optimistic regarding baseball, life, or alligator hunting. 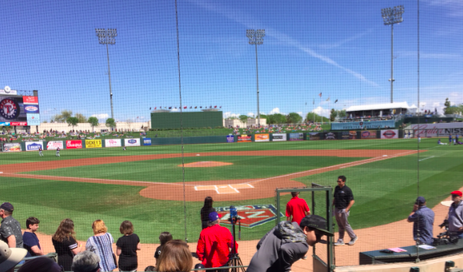 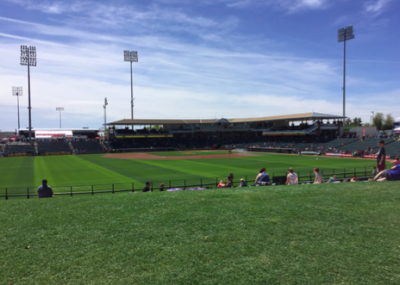 The frost had fallen from the pumpkin and the vernal equinox was preparing to commence. This can only mean one thing for the fans of the Tuesday Night Cigar Club… it was once again time for The Doctor to make my annual pilgrimage to the Valley of the Sun for spring training baseball. Will my beloved Texas Rangers, fresh off a 67-95 campaign in 2018, have any welcome surprises in store for 2019? In my professional opinion, I’m afraid that it’s far too early to tell, but let’s pack the sunscreen and head for Phoenix to play ball!

Sky Harbor International Airport in Phoenix has become a personal favorite of mine for both arrival and departure. They like to play a game of musical chairs with the baggage carousels, and this year was no different, but I have become used to that and now enjoy it as a springtime tradition. Half of the Major League Baseball teams make their spring home in the Cactus League, so denizens from all over the country descend upon the Sonoran Desert sporting the gear of their respective teams. Brewers, Giants, Cubs… not too many Rangers aficionados in sight, however. This was confirmed by the attractive young blonde lady working at the Enterprise Rental Car desk at Sky Harbor.

Last year we had been allowed to upgrade to a Cadillac LTS at no additional charge, and we lucked out again. The full-size car we were going to rent was due for an oil change, so I took a Ford Escape SUV off the lot for the same price. The I-10 West freeway was clogged with gridlock at three in the afternoon, so we crawled at a snail’s pace out of Phoenix proper and towards the familiar confines of Peoria. 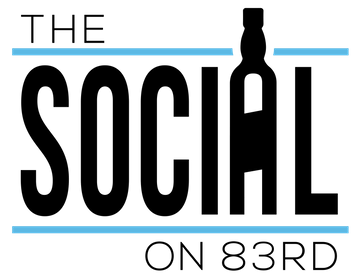 The Social on 83rd restaurant had replaced the Garage Diner. It was slightly more upscale inside although there was a patio leading to an outdoor beer garden where one could play a game of “Cornhole” which apparently involves the tossing of small bean bags. The term means something else entirely where I come from, but no matter. The center cut Manhattan strip was sumptuous and the waitresses were all easy on the eyes. Afterwards I stopped at a mall in nearby Glendale to purchase an official baseball with a Texas Rangers logo on it. The Doctor could care less about autograph seeking. While I have spoken at great length about the grand time that TNCC President Matthew Cade and I had at the Texas Frightmare Convention nearly a decade ago now, the main thrill came from meeting and interacting with horror movie icons as opposed to having them sign memorabilia. I figured the ball could be used in self defense or perhaps launched in protest. Alas, neither opportunity availed itself and I still have the ball in my possession.

Thursday dawned bright and sunny in the valley and it was off to Surprise Stadium for the Cleveland Indians and the Rangers. The seats were perfect, just to the left of home plate and in the shade. Truth be told, there really isn’t a bad seat in the place, although there were a Hitchcockian amount of birds on hand. I assumed that they were searching for discarded hot dogs and not preparing to attack. 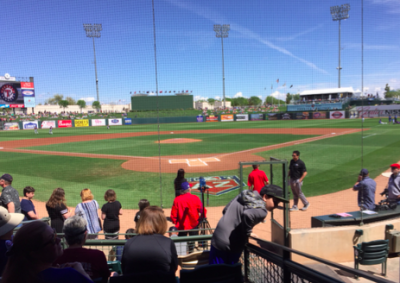 Drew Smyly, having not pitched in two years due to Tommy John surgery and the subsequent recovery, has joined the Rubber Arm Rotation of the Rangers following an offseason deal with the Cubs. Smyly was in trouble often during the game that we watched, but he mostly managed to get out of it. Hopefully he’ll be effective once the season starts, along with other Tommy John survivors Edinson Volquez and Shelby Miller.* Only time will tell, but it is quite possible that at least part of the Rangers starting rotation may require The Doctor to engage in strong drink. Mike Clevinger of the Indians certainly looks the part with his flowing mane and ninety-five mph fastball but he didn’t fool Ronald Guzman and Nomar Mazara who each hammered deep home runs. Rangers closer Jose Leclerc looked like an all-star by dismissing all four Indians hitters that he faced, and when Rougned Odor hit a three-run blast in the bottom of the eighth inning the score was 7-3 in favor of the Rangers. Are some of the young Rangers going to make strides this season? Joey Gallo, who sometimes likes to swing at unhittable, chest-high fastballs was sidelined with a “groin issue” so its far too early to tell in his case, but the early spring training returns on some of the others seems promising. One must remain optimistic regarding baseball, life, or alligator hunting. 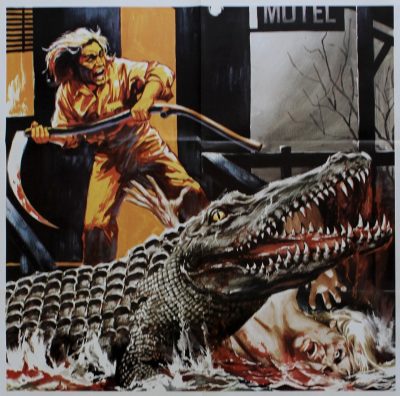 People always ask me what exactly happened on my first honeymoon. Well, the good news is that I survived and now Tut has a new wallet… (artist’s rendering)

After dining at the Rock Bottom Restaurant and Brewery I tried to capture the Valley magic hour. I’m not a professional photographer, so cut me some slack. 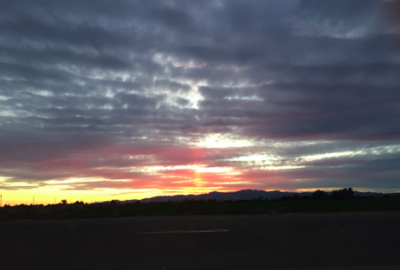 The sun sets over the mountains somewhere around Glendale

Friday was another sparklingly brilliant day of sunshine, warm weather, and non-existent humidity. On the way to Mesa for the Cubs-Rangers contest we stopped in scenic Scottsdale to visit the Museum Of The West, voted the nation’s “Best Western Museum” by True West magazine. I know what you’re thinking: museums, while serving as potential bastions of knowledge, are for schoolchildren and people from Scandinavia. Not so with the Museum Of The West! Not only is there all manner of immaculate paintings and sculptures but also every possible gun and rifle from the shoot-em up days. Naturally I enjoyed perusing over the saloon artifacts which included a package of Orphan Boy Smoking Tobacco. 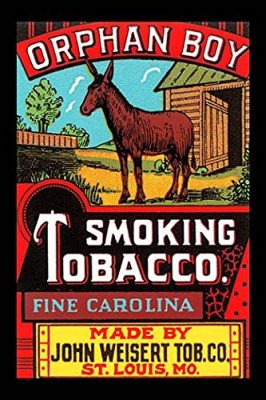 It all made me want to drink whiskey and watch an old western, which I generally want to do anyway. There is also the artwork of nineteenth century painter and photographer Charles Russell, whose entire subject matter consists of women in various stages of undress (Read: he was a pervert). If you are in Scottsdale and are interested in American History or western movies, the Museum Of The West is definitely worth the price of admission. 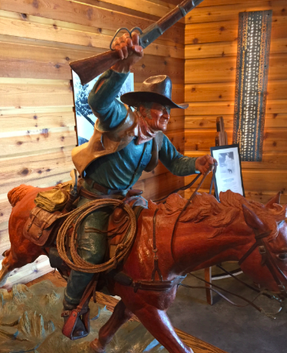 A bust of the Duke! One of the many treasures on display at Scottsdale’s Museum Of The West

It was on to Mesa and Sloan Stadium, the spring training home of the Chicago Cubs… and those bastards made us pay for parking! You don’t pay for parking at spring training games! It’s not the money, mind you, for The Doctor is the furthest thing from cheap, but I don’t like bush league tactics. The paid-for parking space was also a country mile from the stadium and it seemed more like a regular season game back at Globe Life Park. The stadium is nice and the fans were lively, but I couldn’t help thinking that most of them had jumped on the Cubs bandwagon after they won the 2016 World Series. 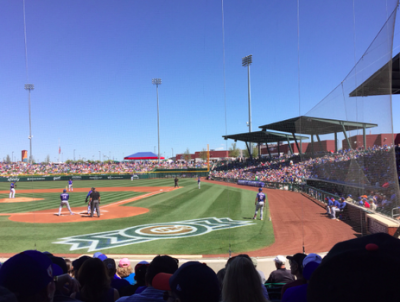 Surrounded by Cubs fans at Sloan Stadium in Mesa. Unfortunately, Bill Murray was not among them…

Jose Quintana was in mid-season form, tossing six innings and yielding one earned run. The Rangers used a pitcher-by-committee approach, which worked, more or less, until Conner Sadzeck entered the game. Sadzeck can throw about ninety-nine mph, but, unfortunately he pitches like Nuke Laloosh as immortalized by Tim Robbins in the film Bull Durham. In other words, he has a live arm but can’t control it. He actually threw a warm-up pitch over his catcher’s head and into the backstop.** The score ended up 7-3 again, only this time the Rangers were on the shit end of the stick. It was a depressing affair, but I remedied it by revisiting the Cracker Jax Amusement Park for some miniature golf. 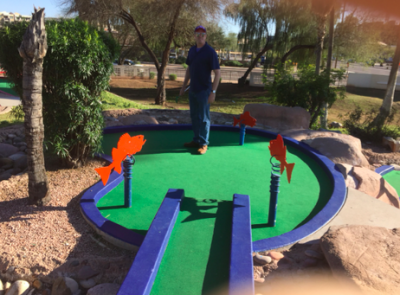 Don’t tell me I didn’t play golf in Phoenix!

Following the round on the “links” we hit up the TapHouse Kitchen in Scottsdale where the chipotle glazed wings were delicious and the ladies who worked there were lovely as well. Thus, another spring training vacation was capped off and the Valley was left behind. I shall not fret, however, for it is baseball time once again. Embrace the spring, my friends, and as always, The Doctor wishes you all a clean bill of health.

* Volquez made two regular season starts before going on the Injured List. Pass the gin.

** Laloosh – er, Sadzeck is no longer with the Rangers. Immediately after the regular season began in late March, the Rangers traded Sadzeck to the Seattle Mariners for a minor league pitcher named Grant Anderson.