Fate & Fishin’ led me to Finck’s Cigar Company. Every year a couple of my high school friends get together for an annual meetup. It’s the only time we can all be in the same place, and we try to do it right. Last year in 2015, I had a “cigar meets fishing line” incident and lost a lure when the cigar burned through the line. I won’t go into my fishing prowess as that story alone should set the tone of what’s more important to me on the lake. I love fishin, and I really do want to catch a fish, but let’s be real. I’m here for the friends, cigars and beer.

“Any suggestions on a cigar holder while I got a line out?” was the question I cast out into our social media pond (CATS Facebook group) and waited to see if someone would bite on it. In enters Bill Fink Jr. He tells me about the Cigar Minder clip and shoots it to me in the mail….along with a Finck’s Cigar Company Toro Sampler pack. Uh-mazing. Let’s do this. 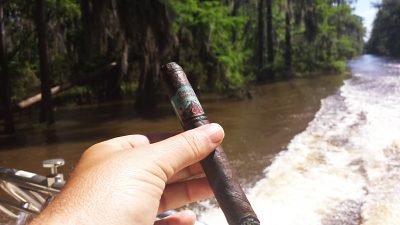 Have you noticed that many cigars will front load pepper and spice into the lighting of their cigars? You light the cigar, BAM! You get a blast of pepper and then it sits down and mellows. The Finck’s Commerce Reserva Privada says “I laugh at you for mellowing”. It never lets up.

Clips, lights and draws very easy which is impressive because we were cruising on the boat into decent wind. I almost decided not to try and take notes on the cigar thinking it would be unfair given the windy conditions. While the Pepper is strong, the cigar itself starts on the mild side of medium. At this point it has presence, but it’s not powerful. 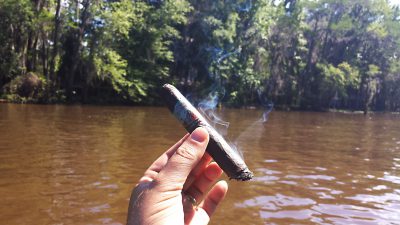 I tried the best I could to shield the cigar from wind. I was impressed that the burn line and construction took the windy beating in stride. Pepper is still going strong, but on the backend, we’re starting to get introduced to a quality leather flavor. The strength has moved over to medium.

I love the smoke profile on this cigar. It’s thick and rolls off the cigar. Visuals are part of the experience for me and this cigar is sexy. Oily, leather, smoky – I’m starting to pay more attention to the cigar than I am the beautiful scenery of Lake Caddo. 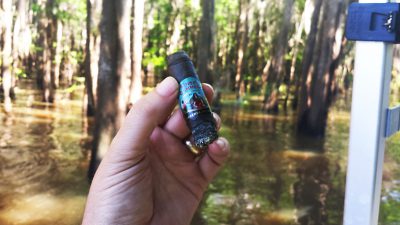 This cigar is still a pepper bomb! I like pepper, but I’m not that big on a cigar having pepper as it’s primary characteristic. I like it as a spark point on the light. The pepper in the Reserva Privada has ridden me like a rented donkey whipping me all the way down the cigar. I did have to re-light a few times but I’m blaming that on the wind as we cruised.

Fortunately for me, the leather flavor has clawed for attention and there’s a backing of mineral to give it an edge. I’m going to guess this is coming from the ligero and if I’m right, Esteli ligero. The strength is blooming medium full. It has a wonderful presence, but it’s not a heavy hitter. I think the strength is true to what the blender was encouraging the cigar to do.

This was not a cigar that’s been in my humidor for weeks or months. I picked up the package on my way to the lake, unwrapped it and away we went. The construction of the cigar is top notch and held up quite nicely. Despite the wind, it never unraveled on me, and through my expert wind shielding techniques that I learned working as a looper in the Himalayas, the burn line was pretty good.

The flavor doesn’t really transition too much in the cigar. There is change, but it’s subtle. It’s definitely not a three act flavor profile. It’s one consistent good act. The flavor is dominated by pepper every inch of the cigar. If you like pepper dominant cigars (and I know a ton of you do), you will LOVE this cigar. Stop what you’re doing and go try this. I’m not that particularly fond of dominant pepper, but this had enough of that good tobacco leather flavor edged with mineral that it kept me not only interested in the cigar, but highly enjoying the cigar.

Bottom line for me is I’m going to order a 4 pack of the Reserva Privada. I think it’s deserving of my back deck treatment and if it shines out there, I’m box purchasing this. 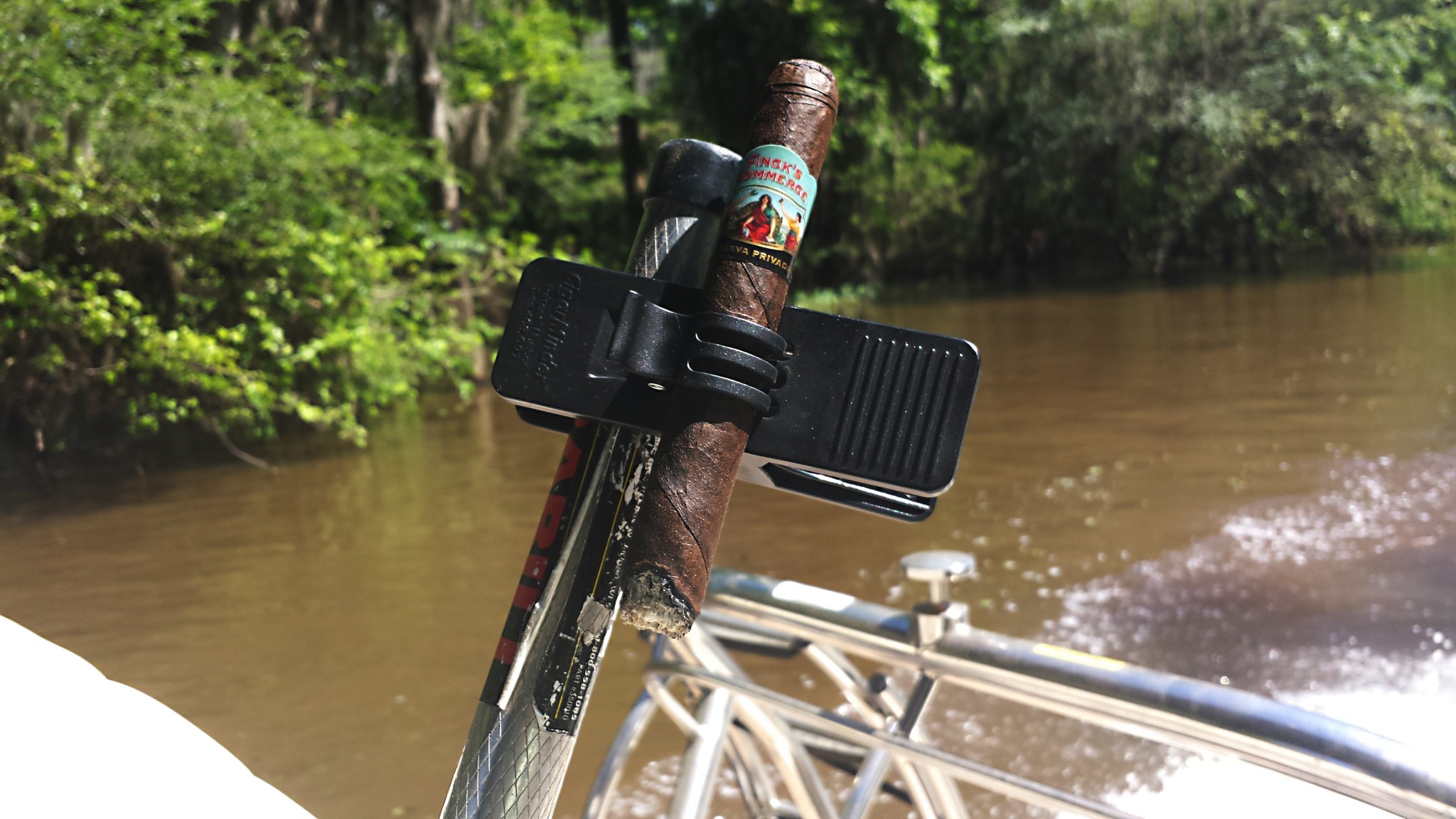 I'm only doin this gig cause I used to date Winona Ryder. I need the money.