You nurture a goose that lays golden eggs, as my Animal Husbandry 101 professor once told me. Granted we were both drunk at the time and he was attempting to deliver a calf, but the wisdom is inarguable... 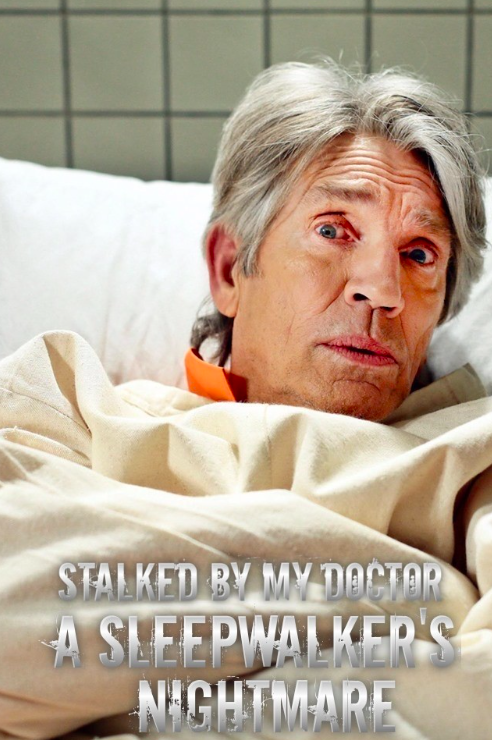 Stalked By My Doctor: A Sleepwalker’s Nightmare

Once upon a yesterday, the Lifetime network was known for producing original movies and television shows that were almost exclusively geared towards a female audience. The programming could have accurately been labeled as “Chick Flicks” with a double dose of estrogen. Nothing is wrong with this, of course; I am merely stating the facts of history. Times change, as times inevitably will. Sappy, feelgood love stories with fairy tale endings are now primarily the domain of the Hallmark Channel (many of them star the lovely Lacey Chabert and, let’s face it, we’ve all enjoyed one or two). The Lifetime network began producing a never-ending stream of suspense/thriller/suburban horror movies with titles that are both ludicrous and enticing such as In Bed With a Killer and Lethal Soccer Mom. Perhaps the apotheosis is Stalked By My Doctor, a film that hit the airwaves in 2015. The legendary Eric Roberts – in a deliciously psychotic performance – played Dr. Albert Beck, a renowned heart surgeon and deranged pervert who becomes obsessed with an attractive teenage patient after treating her. 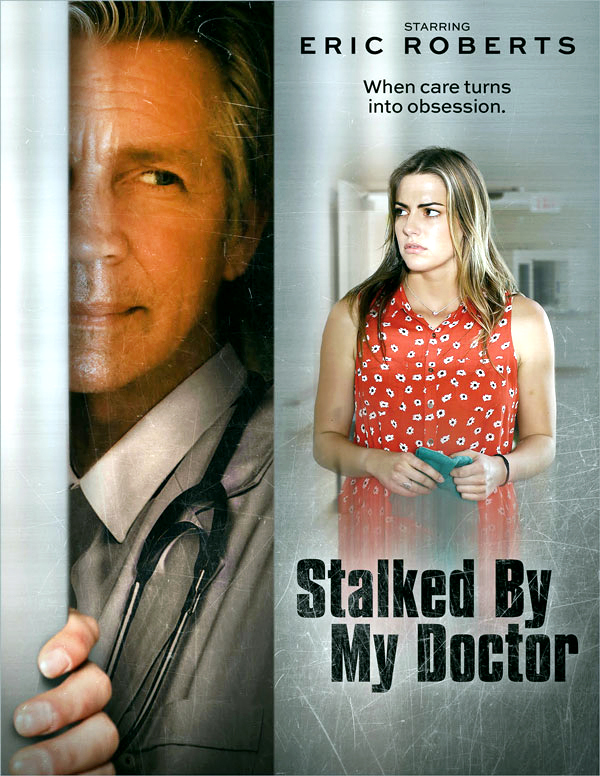 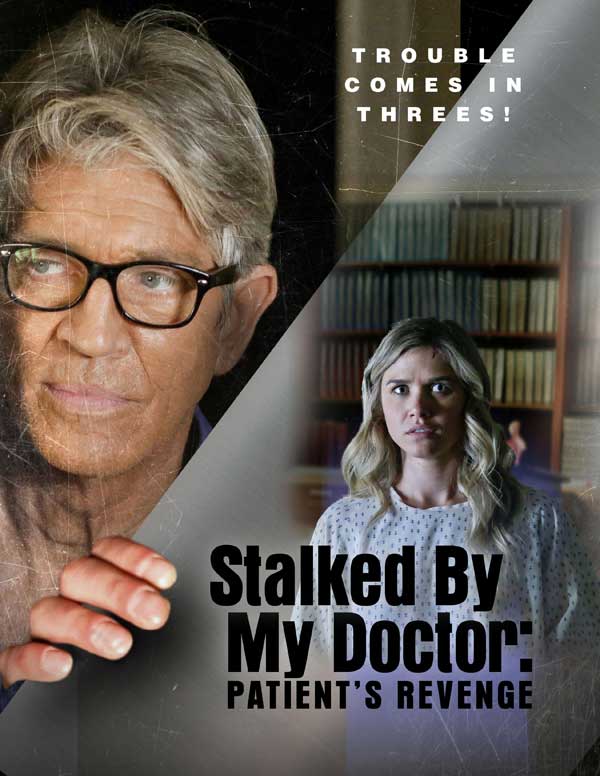 Lifetime wisely saw no reason to stop there, and why should they? Hence the 2019 summer release of Stalked By My Doctor: A Sleepwalker’s Nightmare. You nurture a goose that lays golden eggs, as my Animal Husbandry 101 professor once told me. Granted we were both drunk at the time and he was attempting to deliver a calf, but the wisdom is inarguable.

“Some patients are truly special…”

The learned term for sleepwalking is somnambulism, and that tidbit of information fulfills The Doctor’s educational requirements for a Beyond The Pod film review. I’ve never had issues with sleepwalking, either personally or professionally, but apparently sexy women are inflicted by it in the middle of the night… sleepwalking, that is. The gorgeous, thirty-something Michelle (Emilie Ullerup) interrupts a wedding while sleepwalking and kisses the groom*. Footage of the train wreck hits the internet and Michelle is promptly told by her boss to take a powder from work and seek professional help. Enter the-one-and-the-fucking-only Eric Roberts, reprising his role as Dr. Albert Beck for the fourth time. Beck is now on the lam, pouring coffee and having moist daydreams in a greasy spoon diner somewhere in the American Southwest. Beck quickly and conveniently seizes an opportunity to kill another doctor – the poor bastard being a sleep study expert on his way to a new job in New Mexico – and assumes his identity**.

On his first day on the job at the New Mexico Sleep Study Center (NMSSC, no relation to the TNCC), Dr. Beck – now posing as Dr. Tanner – meets his new colleague Dr. Newman played by none other than scream queen Felissa Rose! That’s right, it’s Angela from the original Sleepaway Camp! 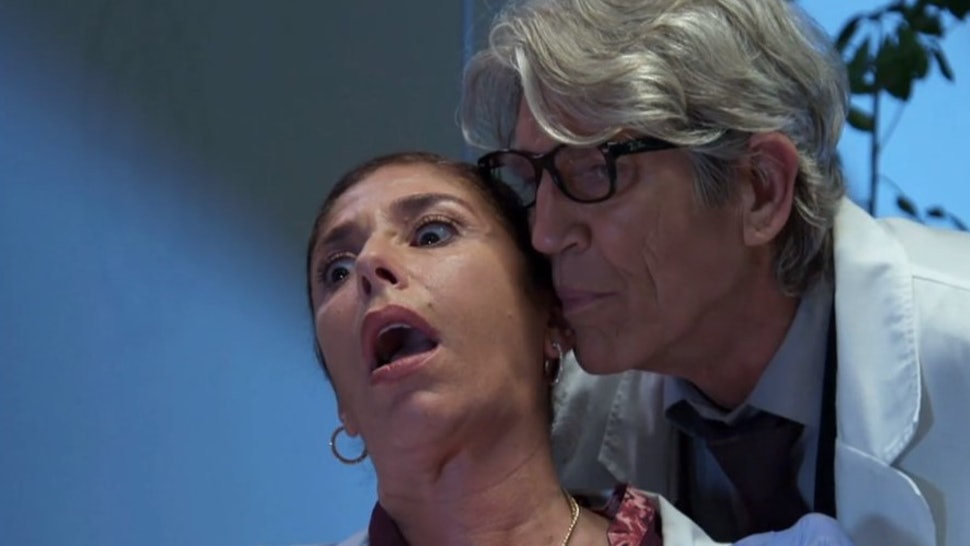 Felissa Rose sans penis and looking none the worse for wear 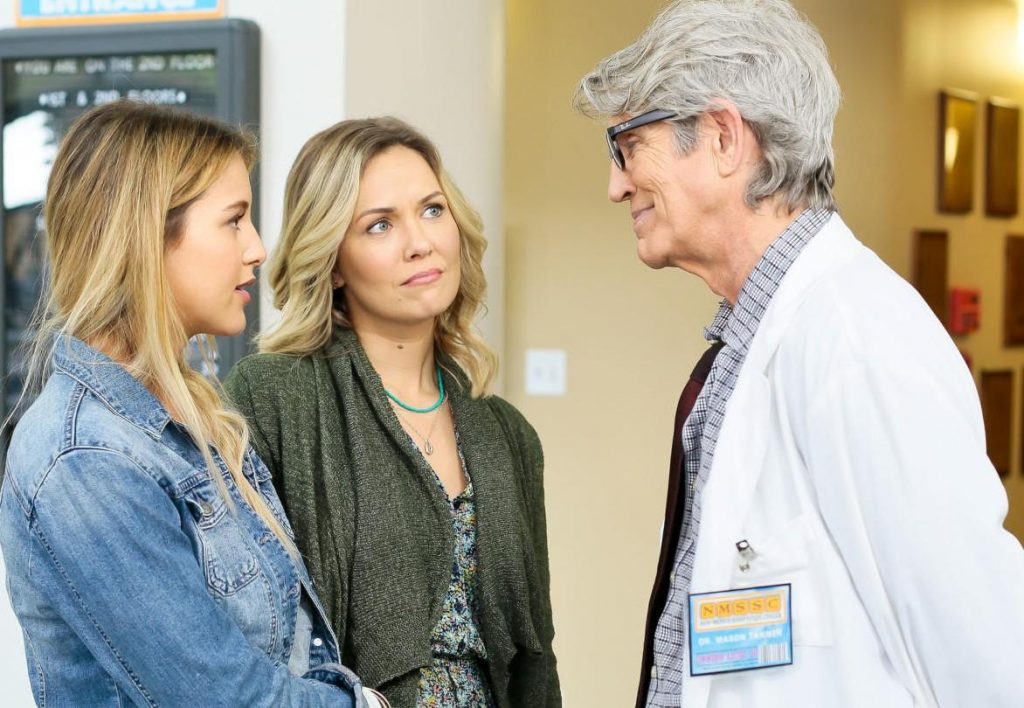 Watch out, ladies who suffer from sexsomnia! The silver haired smoothie may not have your best interests at heart

Dr. Beck is clearly not within shouting distance of anything approaching sanity. He even carries on conversations with an imaginary altar ego. Yes, it’s DUELING ROBERTS with the imaginary version sporting loud Hawaiian shirts and a straw porkpie hat while sipping tropical cocktails… and this is as gleefully enthralling as it all sounds.

Roberts as Beck is perfectly eerie while skulking around outside Michelle’s house and peering into windows, biding his time until he can get laid. His target changes when it turns out that the sexy Michelle has an even sexier niece named Katie (Angeline Appel) who also suffers from a sleeping/sex disorder! You’ve got to be shitting me. This development is icing on the cupcake for Beck, whose true desire starting with the original Stalked By My Doctor movie is to brainwash a hot young babe into falling in love with him. That’s not so wrong, is it? I mean, if you remove the brainwashing element and the fact that Beck murders anyone who gets in the way of his designs, he’s just a man with a lot of love in his heart, am I right? I’m kidding, of course, the TNCC Doctor does not endorse stalking. I do, however, wholeheartedly endorse the portrayal of a stalker by Eric Roberts. Truth be told, I just plain endorse Eric Roberts doing anything. 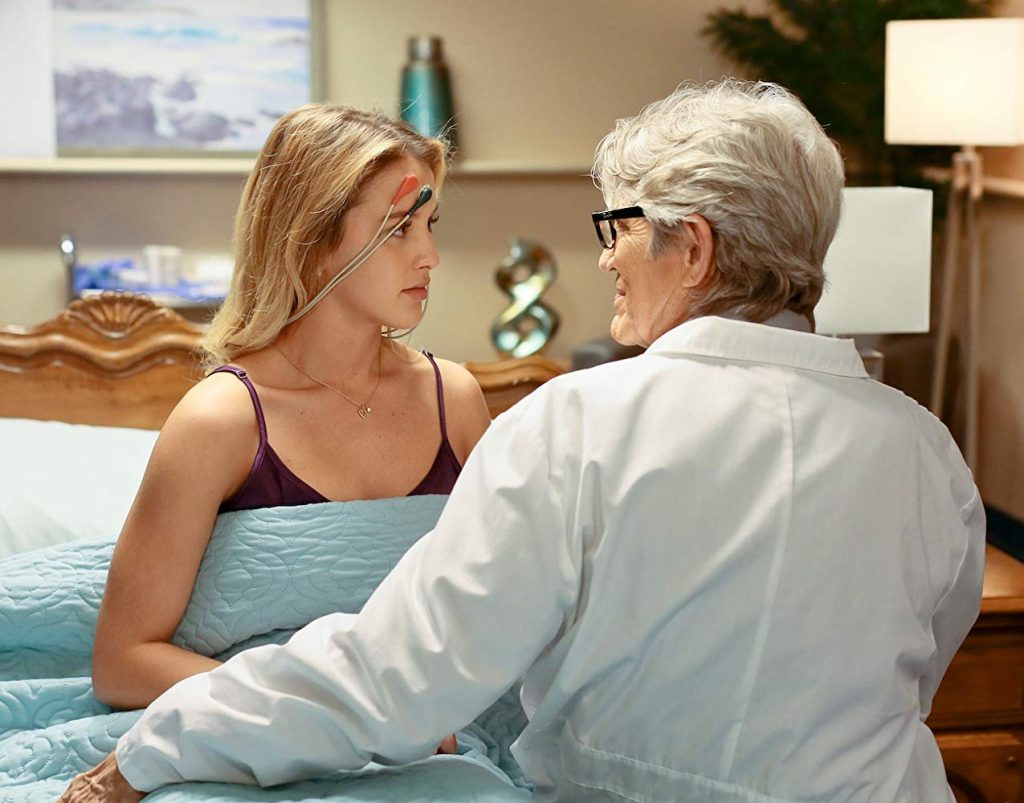 Katie (Angeline Appel) is in danger of falling under the spell of Dr. Beck (Eric Roberts)

Michelle finally begins to grow suspicious of the doctor’s “treatment” methods regarding her niece, and it sure as hell took her long enough. Dr. Newman also becomes dubious and starts sleuthing around, which is a surefire way to diminish one’s survival odds in a Stalked By My Doctor entry. Start asking too many questions about Dr. Beck/Tanner and you may end up falling down a concrete staircase (as a responsible practitioner, I would be remiss if I did not add that Beck is disdainfully ignoring the Hippocratic Oath). What of the man himself, Eric Roberts? 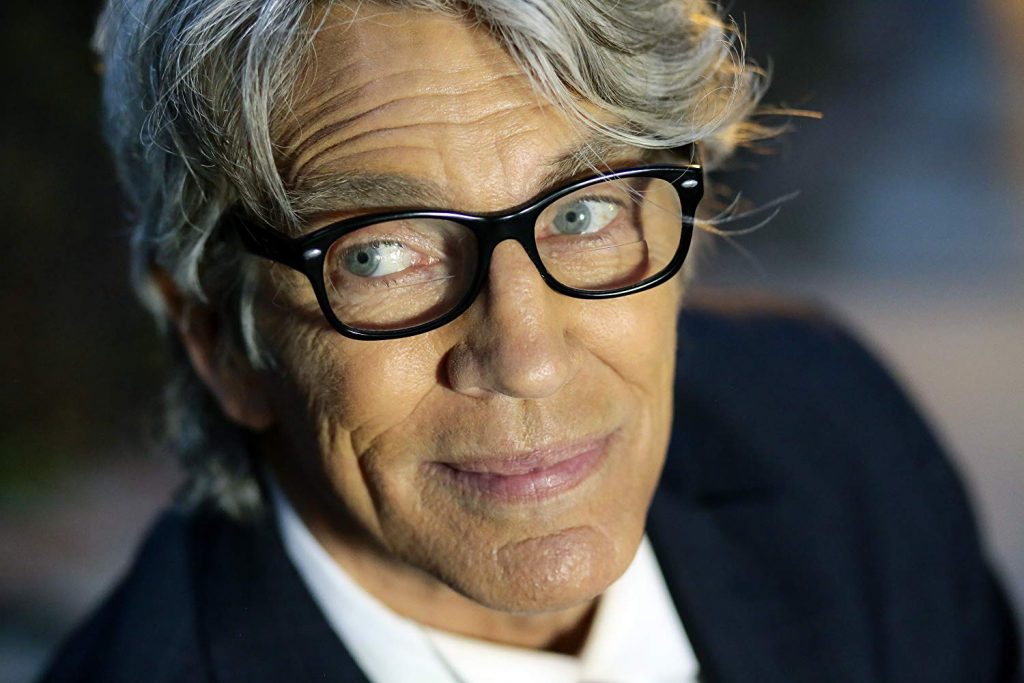 Roberts goes full throttle, which should come as no surprise to any of his fans or to anyone who has ever seen him act in a movie. Whether he is stealing scenes with evil machismo in The Expendables or taking on Sharktopus in a Roger Corman SyFy fare or fearlessly laying it all on the table in a Stalked By My Doctor movie you can be certain that Eric Roberts is going to make choices, take chances, and give a memorable performance. Far too many actors and actresses walk through a performance for a large sack of money. Whatever anyone thinks of Roberts – and opinions abound – one cannot argue that he is a professional who goes for the jugular and doesn’t appear to give a furry rat’s ass. Stalked By My Doctor 4 is no exception. Dr. Beck is so loony as to border on being comical but simmering beneath the surface is a ticking time bomb ready to explode. In the hands of a lesser actor, a made-for-Lifetime movie like this could easily come off as schlock. Whereas with Eric Roberts, it’s a batshit home run. Watch Stalked By My Doctor: A Sleepwalker’s Nightmare at your earliest opportunity. As always, dear friends, The Doctor (not Dr. Beck!) wishes you all a clean bill of health. 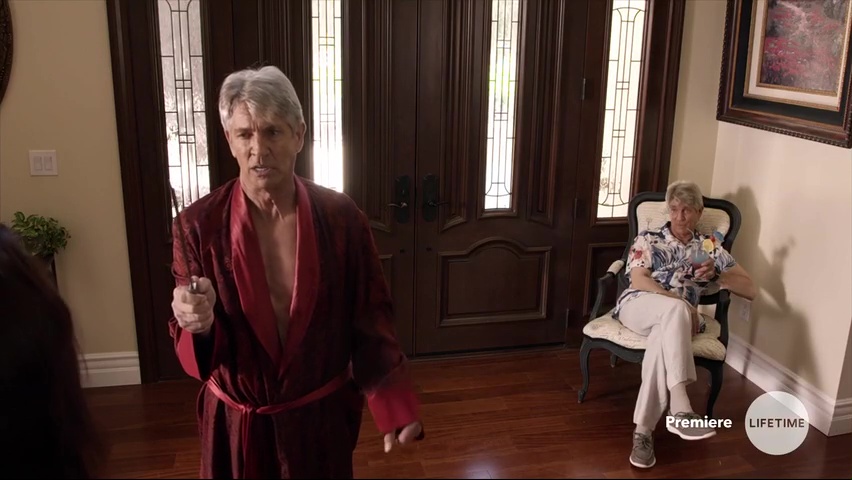 * It really should go without saying, but I’ll say it anyway – Proper enjoyment of a Lifetime or LMN thriller involves the suspension of disbelief. One doesn’t have to accept the existence of flying monkeys or unicorns but there are occasional plot contrivances and holes in logic that must simply be ignored. You know what you are getting into when you sit down to watch movies of this ilk; you have no one to blame for lost time other than yourself. And if you are a hipster wiener who looks down on these movies and those of us who periodically take joy in them, then I feel sorry for your loser ass.

** Read the above footnote again.