Our Statement Regarding the FDA and the Premium Cigar Industry

I think we, as passionate lovers of the leaf, have grown apathetic to the solutions proposed to us pure and simple. Actually apathetic isn't the right word, we've grown numb.

As I sit here in The Corner Of No Hope I can’t help but find myself feeling a little… hopeless. As I mentioned briefly on our last podcast episode, the US Food and Drug Administration has recently put its giant soulless bureaucratic boot heel on the neck of the premium cigar industry. All cigars introduced into the marketplace after February 15, 2007 will be subject to FDA approval and regulations. Their logic is illogical (there is obviously NO difference between a cigar made prior to 2007 and one produced after 2007 – NONE), their claims are mostly false (children and teenagers are NOT strolling into tobacco shops and buying premium cigars), it’s so damn hard to make sense of the nonsensical when it comes to this mess that I believe most of us brothers and sisters of the leaf are left with our heads spinning. We’re looking for proposed solutions, looking for industry leadership to let us know exactly how they’re going to combat this injustice (lawsuits?), we are looking for answers. But as of today all we as consumers have is a slew of petitions to sign, a march on Washington is being planned, and that’s about as far as it goes. As with anything like this, conspiracy theories are zooming across social media right and left:

The major cigarette companies are behind this to kill off the rival vaping industry, which came into play well after 2007…

The major cigar companies are in support of this as it will kill off all of their smaller boutique competitors, which coincidentally skyrocketed post 2007. Or, just as sinister but maybe even more manipulative, the larger companies will simply buy up the smaller companies as they will be the only ones who are able to afford the insanely expensive FDA application and approval fees…

Do any of these theories hold water? Beats me. It’s all very “Three Days Of The Condor” and maybe I’ve seen one too many political thrillers but I’m not really trusting anything I’m being told by anyone so far. Who knows how deep this thing goes… Could The Corner Of No Hope be bugged? Am I being followed??? 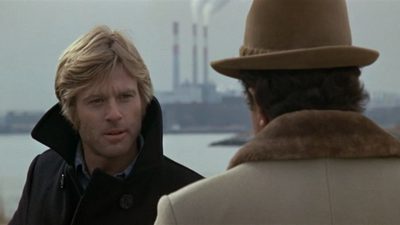 “From this point on, only refer to me as my codename Retrohale”

The only things I do know for a FACT are the following:

– There is absolutely no difference between a cigar made before February 15, 2007 and after February 15, 2007. So the FDA’s claim of basing this shut down of our freedoms as a “health issue” is complete horseshit. No matter who is pulling the puppet’s strings here, it’s all about money.

– Many small countries with relatively stable economies due to cigar manufacturing are about to have their world, their cultures, completely turned upside down. This will be a crushing crippling blow to Central America and beyond.

– Premium cigars are the number one relaxation item requested by our military troops overseas and Cigars For Warriors alone shipped out 250,000 cigars last year. A large portion of those cigars (60%) were donated by retailers and manufacturers. Under the new FDA regulations these same donations would now be outlawed and punished by fines and or imprisonment.

– In an industry that prides itself on brotherhood and unity, I’m hearing a deafening silence from the major players. I realize there is competition in any business arena, but I also have come to know personally quite a few of the most successful boutique label owners and I know for a fact that they view the creation of new companies and the long term success of older established brands as nothing but HEALTHY for the cigar world. These men and women are scared. They’ve invested their family’s savings, they’ve relocated their entire lives, to follow their dream and in one fell swoop one government agency has decided – without, I believe, any specific legislation authorizing it to do so – to wipe these companies completely off the map. So what’s the next step? What’s the major Plan Of Action to let these dedicated people know that a stand is going to be made on behalf of the premium cigar industry and why that plan has a legitimate chance at succeeding? Hopefully we will hear that plan soon before it’s too late.

– There are several petitions to the White House making their away around Facebook, one composed by Cigar Rights of America and a few others. I’ve signed them all, I think, but the lack of signatures and organization we are seeing here does not surprise me. As cigar smokers we have been signing petitions and calling our congressmen for years now and where has it got us? It’s got us to this point. I believe, right or wrong, that cigar smokers are looking for another answer to this crisis. Otherwise why would every brick and mortar cigar shop not have an iPad or a laptop on its counter to get customers to sign the CRA’s petition? Why hasn’t industry leadership called for this to happen? Seems like a no-brainer to me but what the hell do I know about political influence and Washington moving and shaking (answer: I know nothing). And why haven’t the online cigar groups who all claim to have passionate memberships in the tens of thousands not easily racked up the number of petition signatures required? Maybe these Facebook membership numbers aren’t what they seem, or maybe a majority of our signatures are not being logged because the FDA is part of the government after all so they could certainly manipulate any numbers they choose to serve their purpose… OOPS! Now I’m starting to sound like I should be wearing a tin foil hat and hoarding cans of beans in my garage. I think we, as passionate lovers of the leaf, have grown apathetic to the solutions proposed to us pure and simple. Actually apathetic isn’t the right word, we’ve grown numb. We feel as though we’ve done all we can and what we haven’t yet done simply won’t work. It’s easier on our hearts after a long day to just take yet another selfie while smoking our favorite stogie on the back porch and put the whole terrifying situation out of our minds. We need a hero to come in and lead the charge with new ideas and there’s a very good possibility that he or she ain’t riding on on a big white horse anytime soon. 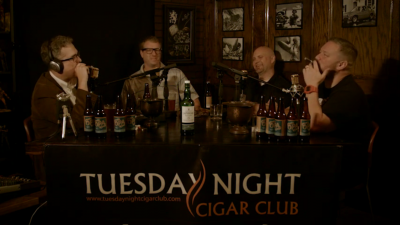 As you may know, every week on our podcast we discuss a different film while reviewing our cigars and often those movies involve a futuristic society, sci-fi imaginings of a totalitarian US government that suffocates its citizens with unjust laws and oppressive force. We laugh off exploitation genre fare like “The Running Man“* and “Demolition Man” as versions of our country that simply could never exist, there’s no way We The People would let things get to that point! No Fucking Way! But little things add up, folks, and slow and steady often wins the race. It’s scary shit and I’m not laughing any more. 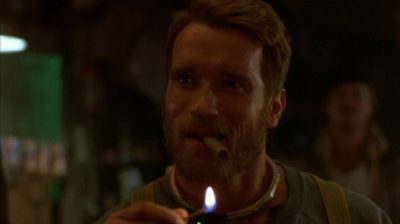 Where’s our Ben Richards when we need him?

I will continue to sign every petition. I will continue to call my state representatives. I will do whatever it is that I’m asked to do in order to help an industry that I truly hold close to my heart. I wish I had the answers. The cigar world has been very good to both myself and The Tuesday Night Cigar Club and I hold hope that maybe, just maybe, there’s a chance for it to survive and thrive just yet.

Long ashes for hopefully a very long time to come,