The Bewitched is a complex, expertly refined addition to the Muestra de Saka series that features a highly enjoyable flavor profile with interesting transitions in both strength and character...

We here in The Corner Of No Hope are fans of Dunbarton’s Muestra de Saka series. So much so that the Nacatamale remains, several years later, as not only my favorite of the series but perhaps my favorite Dunbarton offering overall since the company’s inception back in 2015. So needless to say when we received a handful of coffins adorned with the simple image of a black owl I was extremely excited to light one on fire as soon as humanly possible… if cigar boner* isn’t already a term then it damn well should be. 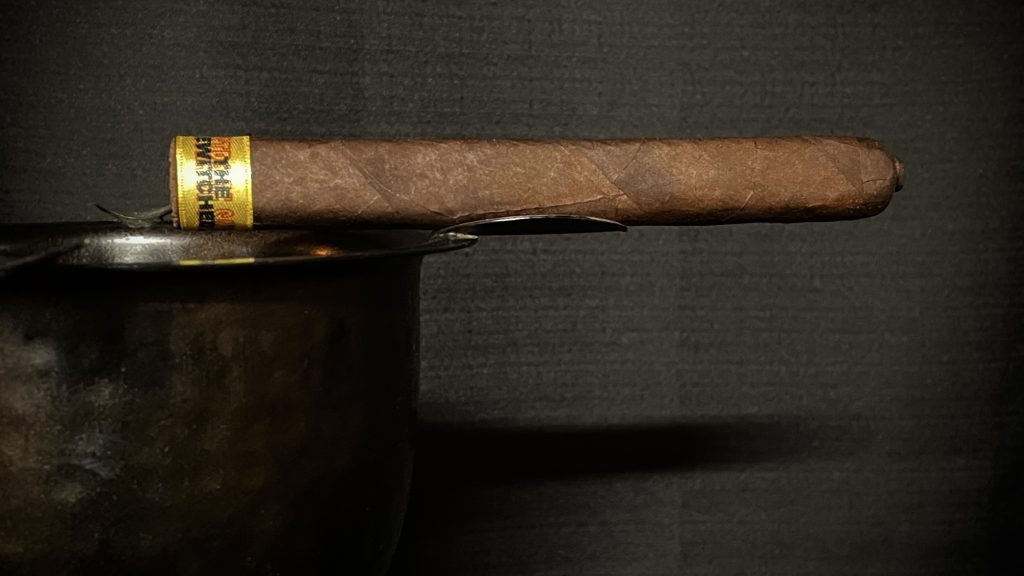 From the moment that the coffin lid is seductively slid off, it’s clear even to a blind man that The Bewitched is a straight-up gorgeous cigar. This box-pressed beauty features a spiral cap, slightly oily sheen, and there’s just the right amount of give when squeezed between two fingers. The wrapper’s aroma is that of espresso, cedar, and a raisin-like sweetness when sniffing the foot of The Bewitched directly. 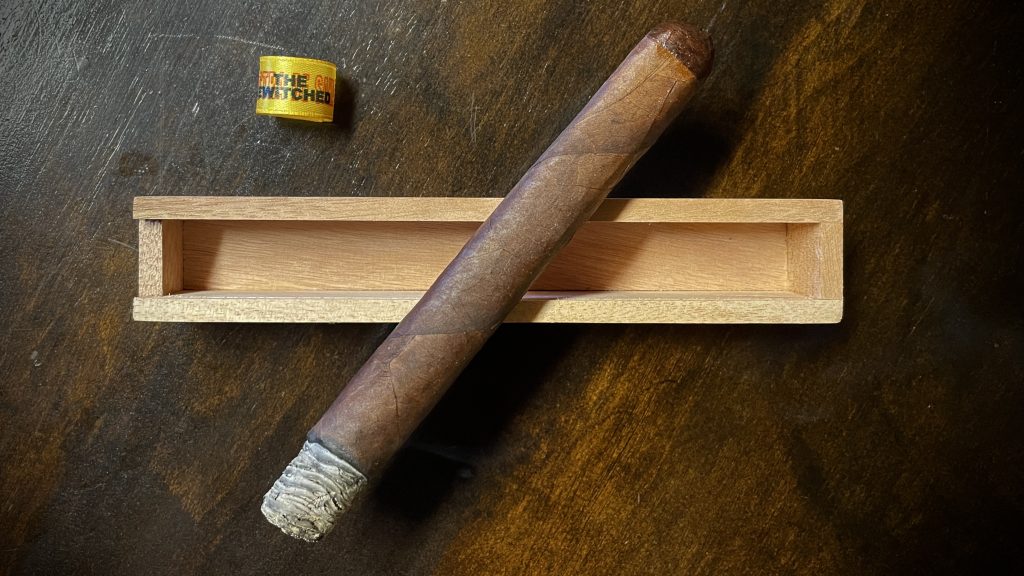 After experiencing a cold draw that consisted of yet more raisin and a touch of salt, fire is added to the mix and the result is an immediate zip of white pepper spice through the nose while flavors of roasted coffee backed by a dash of mineral begin to present themselves via the draw. Around the 1” mark, the retrohale’s spice downshifts considerably which allows a gentle cedar note to arise and it plays very nicely with the coffee. I briefly detect some faint honey now on the retro and I pray to Crom that it continues to develop. And if it doesn’t then to Hell with Crom! If I’ve offended any Cimmerians in our vast audience by that sudden sacrilegious outburst then allow me to prematurely apologize, please don’t cancel me… or chop my head off. 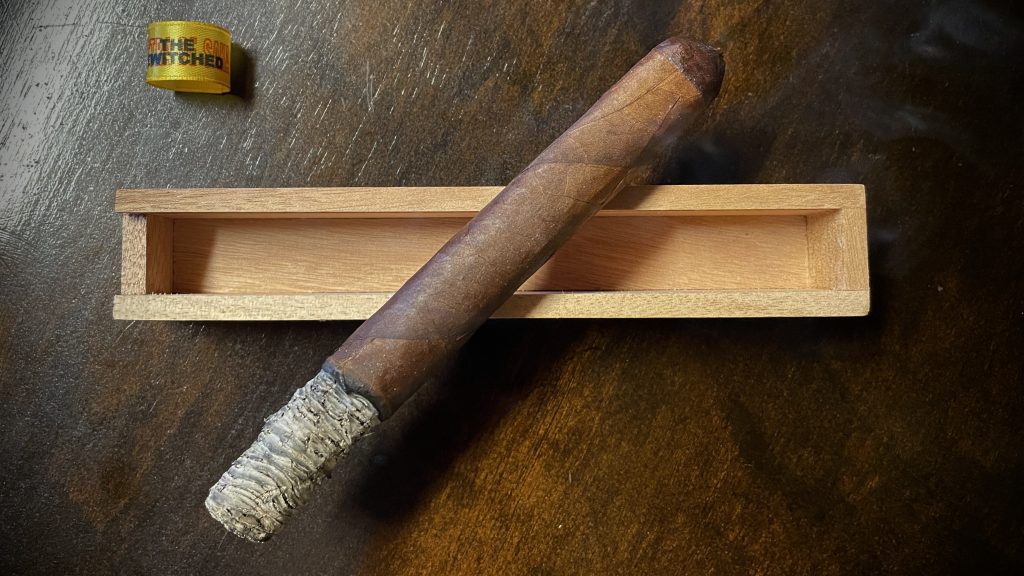 So I’ve mentioned this several times before but it’s always worth mentioning again – I respect the hell out of a cigar in which you can simply twist off the cap and smoke it without any clipping, cutting, etc. A creaminess begins to creep in underneath the coffee and cedar here at the end of the initial third just as the mineral component begins to diminish. 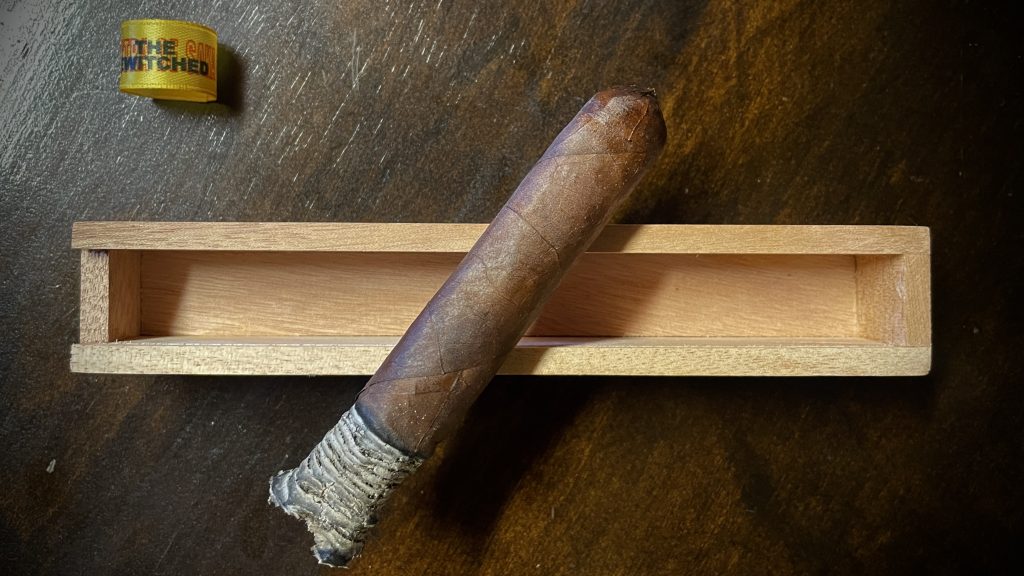 While The Bewitched may resemble a delicious chocolate bar, there is no chocolate to be found as of yet in the cigar’s flavor profile… dammit. Oh and that honey flavor vanished just as quickly as it appeared… double dammit.

The flavors that are present and accounted for are awesome. Cedar, creamy coffee, and now just a hint of mineral are still the dominant notes on the draw here at the beginning of the middle portion, while the retrohale’s pepper spice has spiked up in strength just a tad here as well. Construction-wise, The Bewitched is performing flawlessly with a fantastic draw and near perfect burn. The salty element that was hinted at on the cold draw begins to show itself again around the fifty yard line. As the smoking experience continues, a flavor I can only compare to a Cherry Vanilla Coke has joined the party as well. At least I think that’s what I’m detecting, I haven’t had a Cherry Coke in probably over three decades so perhaps a trip to Sonic is in order, you know, for research purposes. I’ll probably need to pick up an Extra-Long Chili Cheese Coney while I’m there too, again, for research purposes. Don’t judge me! 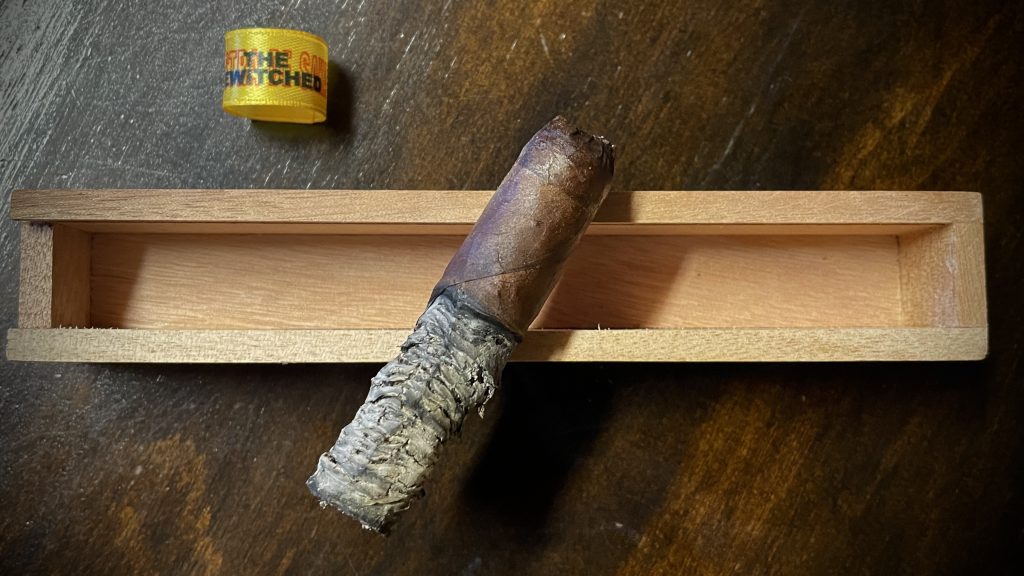 Smoke production is copious here in the final act, as thick white clouds pour from both ends of The Bewitched. I love a cigar that keeps me on my toes and the continuously fluctuating strength of the pepper spice does just that. The mineral and vanilla are now solely presented on the retrohale while the draw’s core profile of cedar and coffee holds steadfast although the creaminess has now receded to a point where you have to really hunt for it. Much like owls hunt for their prey at night perhaps… nice touch, Maestro Saka. The vanilla is now more of a vanilla cake flavor here in the final few puffs as the cola and cherry notes have dissipated. So I suppose that I need to now add a Vanilla Cake Batter Milkshake to my Sonic order… for further research purposes. Look folks, I have my process and if you don’t like it then you can start your own fucking website and call things as you see them… 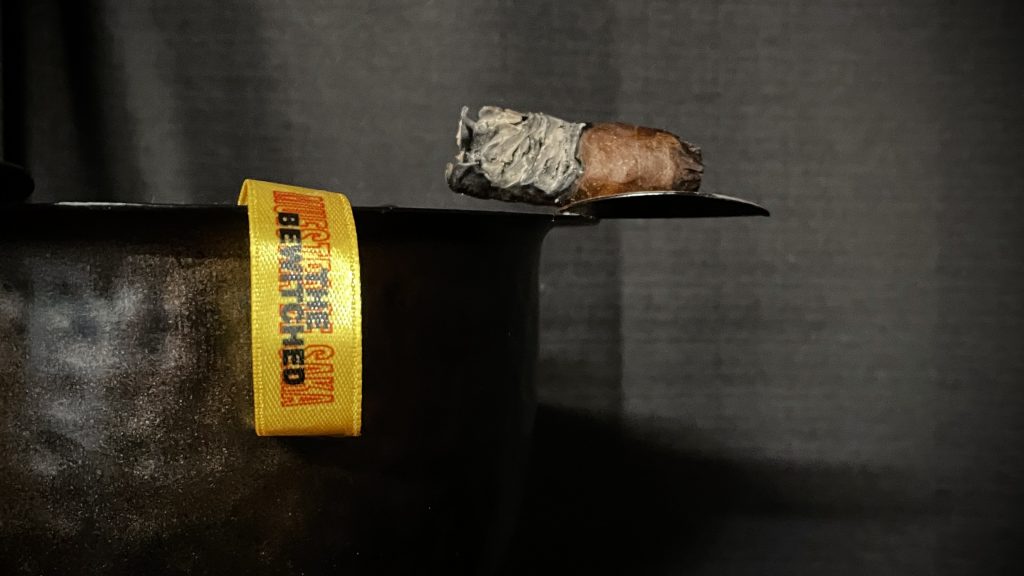 The Bewitched is a complex, expertly refined addition to the Muestra de Saka series that features a highly enjoyable flavor profile with interesting transitions in both strength and character. $20 is a lot to spend on a cigar in today’s world and for that price point the stogie better deliver something special. I can report without hesitation that The Bewitched does indeed do just that over the course of 80 minutes. So seek a few coffins out for yourself and let us know if you agree! 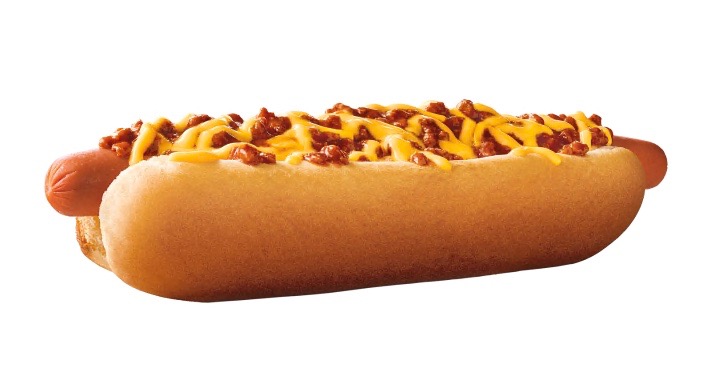 Editor’s Note: Sonic has not compensated the TNCC in any way shape or form for the multiple mentions of their fine establishment within this review. But if they happen to see this and want to hook a broke cigar podcaster up, here’s where to find me!