The Sangre Nueva robusto is a well balanced cigar with an enjoyable flavor profile that develops nicely over the course of 65 minutes...

I’ve smoked several Casa Cuevas offerings over the years (Patrimonio & Reserva Maduro) and the resulting reviews have been positive . However, the latest brand to emerge from Casa Cuevas has a very different backstory to it…

Master Blender Luis Cuevas Sr. felt it was time that his grandson Alec Cuevas take the lead on new brands and the aptly named Sangre Nueva (translates to New Blood from Spanish) is his first creation. Alec Cuevas, the 5th generation of the Cuevas tobacco family looked to create a blend that represents “old Traditions, new Generation”. 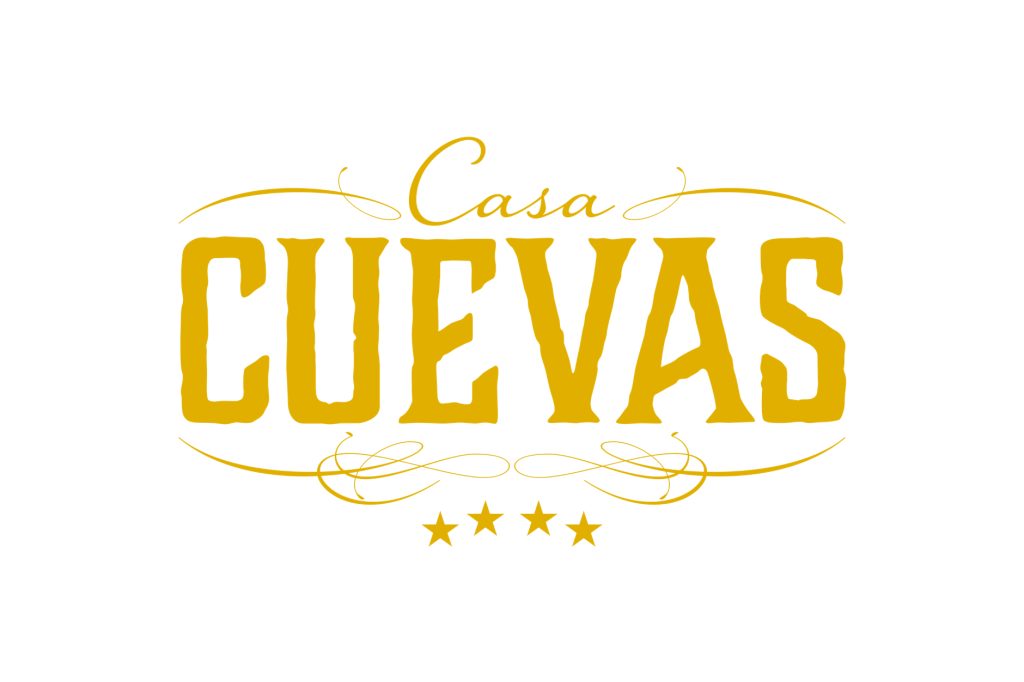 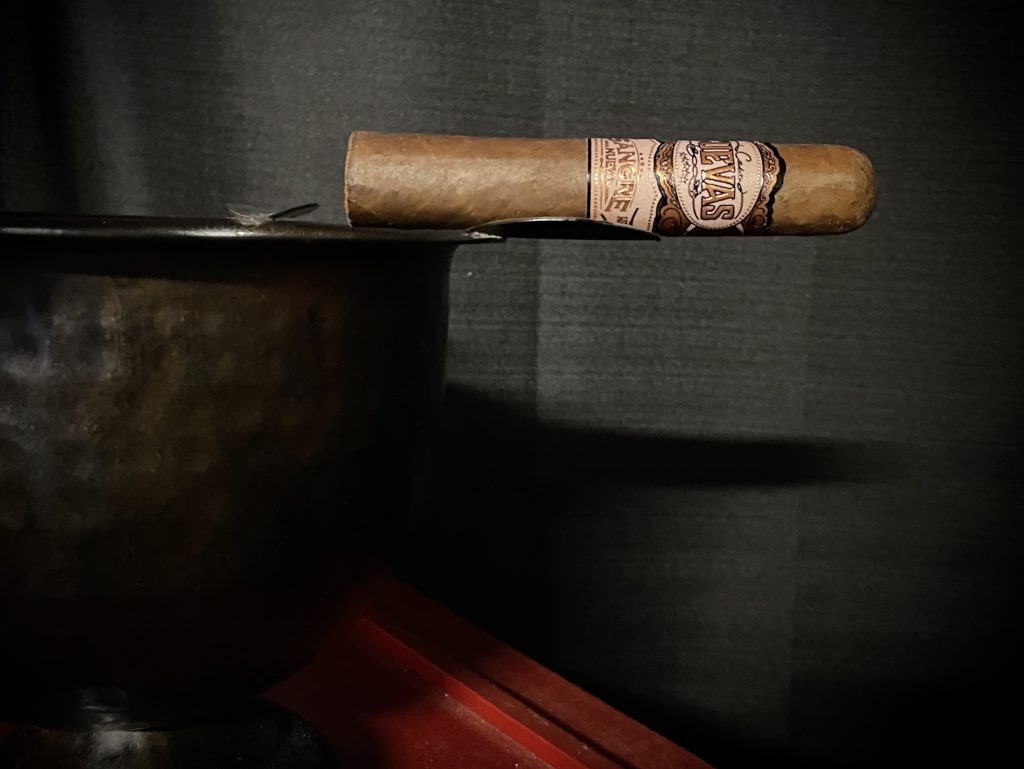 The Sangre Nueva features strong aromas of leather, rodeo stuff ©, and a dried fruit sweetness. The Cameroon-seed wrapper leaf is devoid of any surface oils and there’s minimal veins visible. The cigar has just the desired amount of give when squeezed between two fingers. 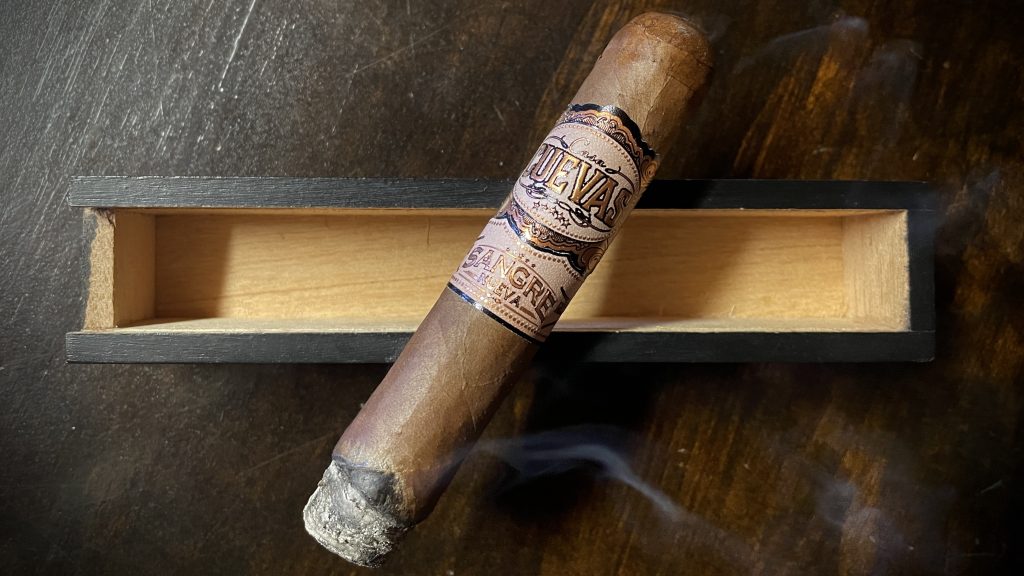 There’s some slight mint and floral notes detected on the Sangre Nueva’s cold draw. Upon ignition, there’s a tingling black pepper spice through the nose while the draw produces bold flavors of oak and earthiness. The cigar is a smokeshow as large grey clouds pour from the foot and the resulting aroma is quite pleasant (I’ve found that cigars blended with Pennsylvania broadleaf usually smell pretty damn good). Around the 1” mark, an unsalted cashew note begins to develop behind the pepper spice. 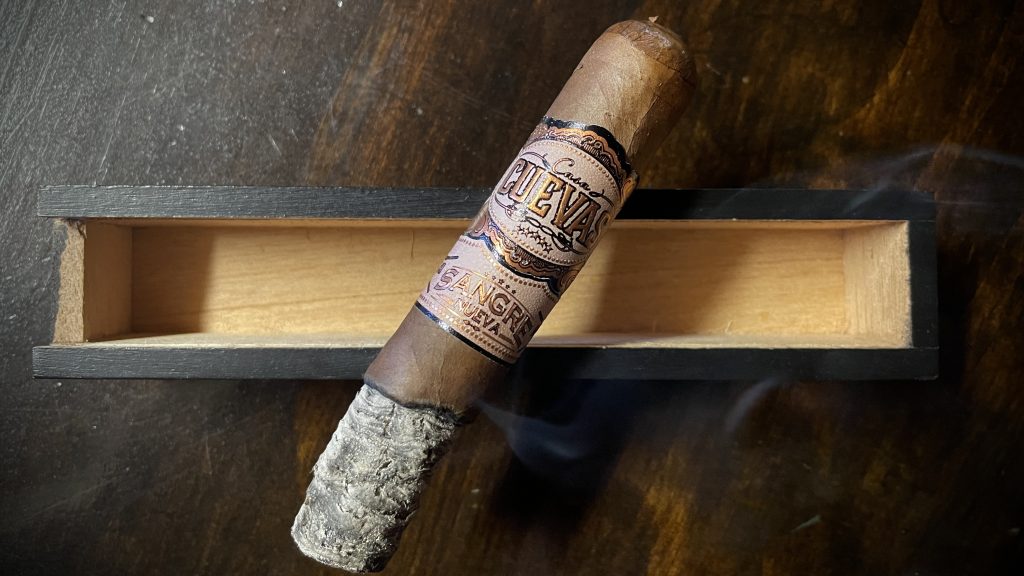 After a quick touch up to the burn line at the end of the first third (no biggie), construction has been good with a smooth draw (punch cut) and a relatively straight burn line that’s holding the dark grey ash quite well. The strength of the black pepper has declined slightly here as we approach the fifty yard line, leaving the rather dry cashew note almost by its lonesome on the retrohale.

With the spice now diminishing, a faint espresso note is beginning to develop underneath the oak and earth now via the draw. The burn line begins to grow a bit uneven again but I’m going to give it a chance to self correct before I torch this sucker for a second time… 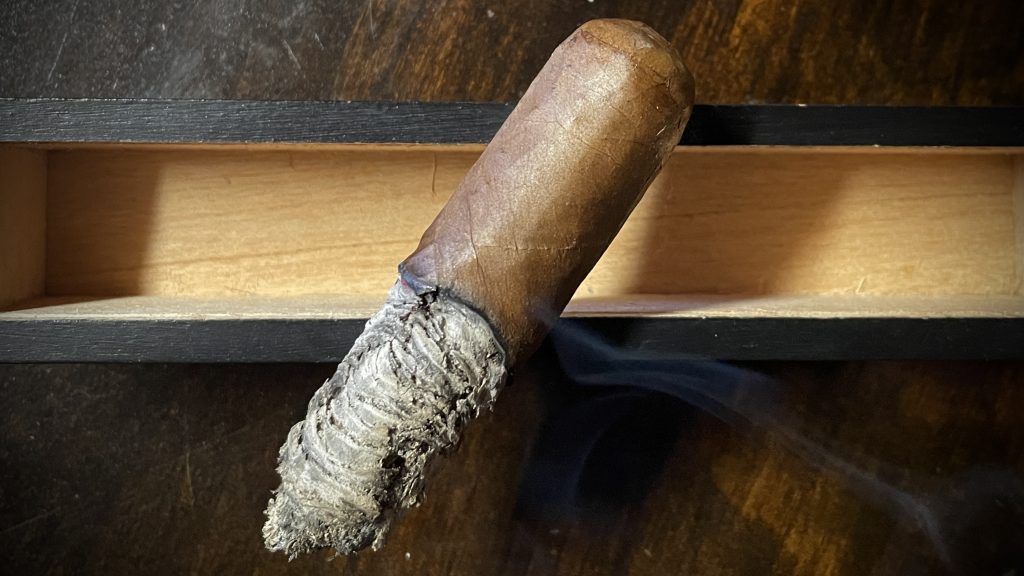 There’s a Nicaraguan mineral component that’s been introduced through the nose here in the last act and it plays very nicely with the cashew and now medium strength (once again) black pepper. It’s yet another addition of a new flavor that’s continued to develop steadily as the cigar smoking experience continues forward. As far as the draw is concerned, oak and earth continue to rule the roost as that espresso note that was hinted at earlier never become fully realized. The overall body of the cigar becomes significantly more full right before the finish line. It should be mentioned that the burn line issue DID resolve itself to an acceptable outcome without further maintenace performed by yours truly… 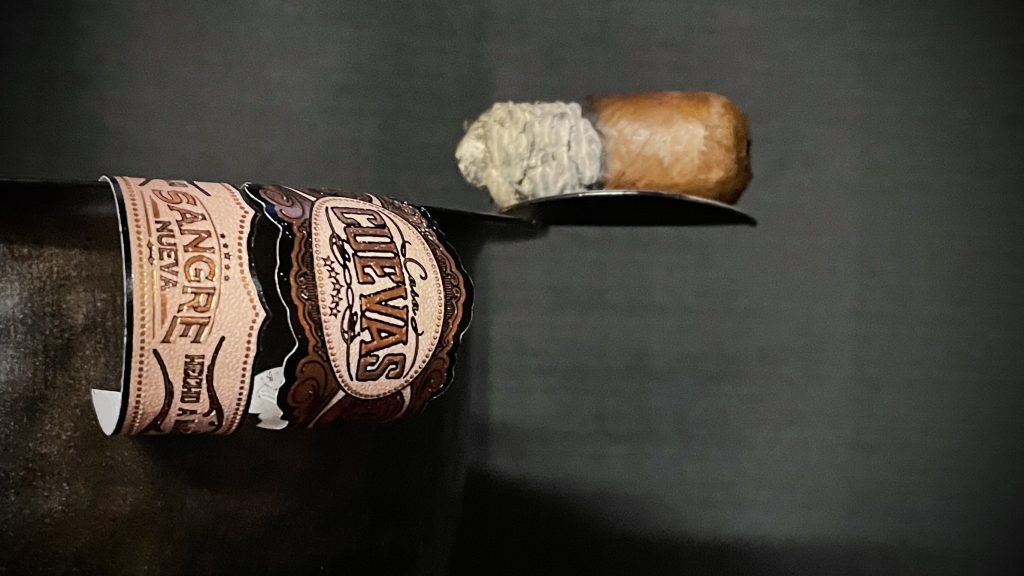 The Sangre Nueva robusto is a well balanced cigar with an enjoyable flavor profile that develops nicely over the course of 65 minutes. I could easily see the Sangre Nueva pairing well with either a cup of coffee or a few fat fingers of Irish scotch whiskey. In fact, I’m going to take my own advice and assume that every coffee shop in town is closed and head to the nearest liquor store right now!