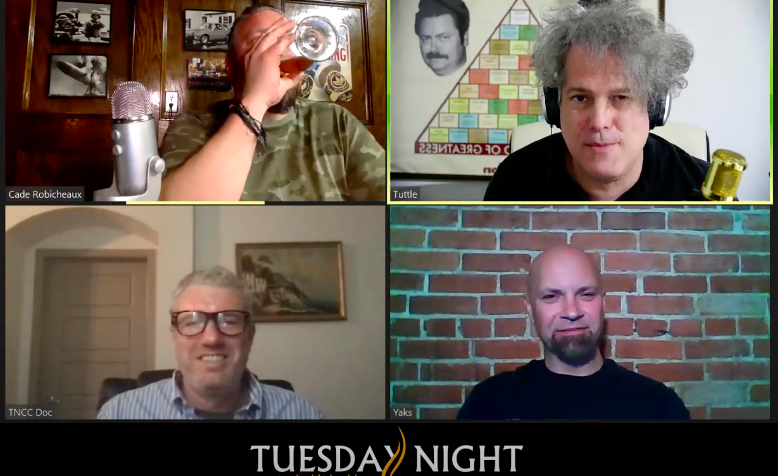 “Well maybe Chevy Chase hasn’t seen the movie about the teenage kid getting his dong chopped off!”

Tonight’s show has a little bit of everything: you’ll laugh (as always), you’ll cry (when we fill up The Boot Of Remembrance), you’ll learn a thing or two (probably not), and you just might learn the true meaning of love (certainly not). In other words, boys and girls, it’s another episode of the best bang-for-your-buck podcast on the interwebs (in that it’s free and it’s always awesome). And my parentheses buttons just snapped off my keyboard, so click on the links below and join the fuckin’ party!!!

THE CIGAR – MANZANITA by SOUTHERN DRAW

Size: 6 x 52
Wrapper: Undisclosed (habano hybrid leaf)
Binder: Undisclosed (habano)
Filler: Undisclosed (pelo de oro, corojo 99, and ligero)
Price: $14.99 (and please remember when purchasing some fine Southern Draw cigars or other brands from FamousSmokeShop.com to use your new favorite promo code TNCC20 at checkout where it will knock $20 off your purchase of $100 or more. You don’t even have to be from the south for that promo code to work, I hear it functions just fine for yankees as well. So all of you Rhode Islanders go nuts!)

“We have long desired to share the history of traditional tobacco and its spiritual importance and then we had an epiphany while working on names for our new cigar release,” said Southern Draw’s Robert Holt in a press release. “Some nostalgic names were thrown around, but, when we saw this leaf, its deep red color, observed the texture, rolled the tabaquiados and smoked them together, there was a unanimous endorsement that Manzanita, meaning ‘little apple’ in Spanish, describing the tiny, apple-like fruit, was perfect.” 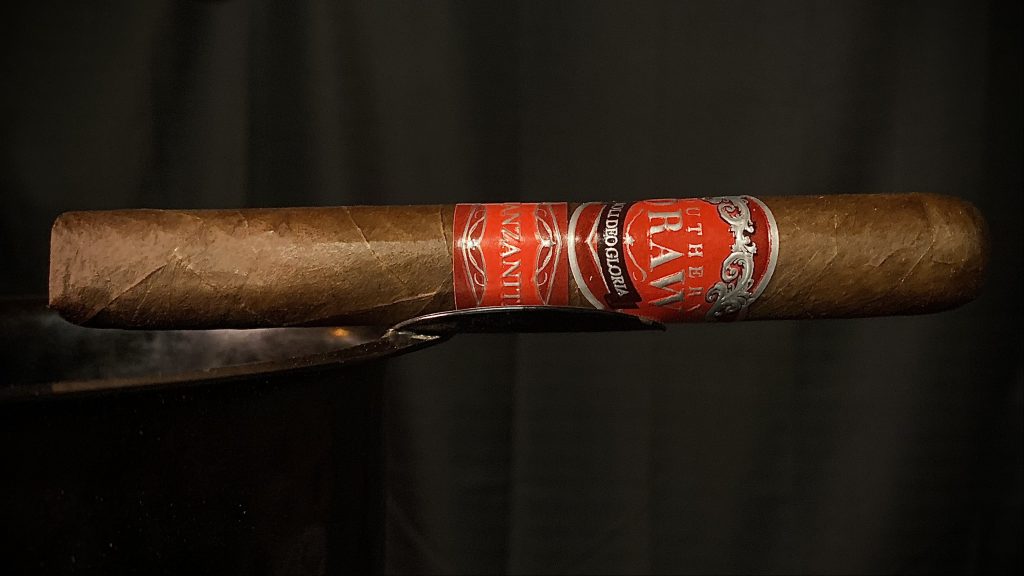 The Manzanita’s wrapper certainly does have a reddish hue to it so the name does indeed seem to fit… It’s a sexy smelling cigar and there’s a definite sweet tanginess present both on the cold draw and when sniffing the foot of the cigar directly prior to setting it on fire. Upon ignition, there’s some noticeable but not overpowering black pepper with a slight touch of cinnamon on the retrohale. The draw is far more interesting with notes of medium cedar and the distinct flavor of roasted ballpark peanuts. Around an inch in, a minimal amount of earth but a glorious mineral note joins the pepper through the nose. 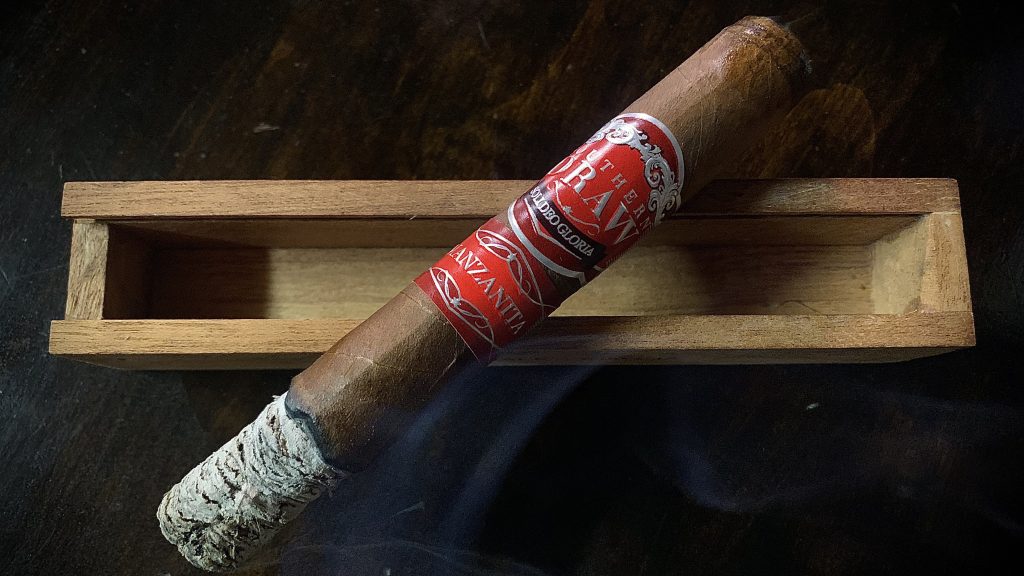 Around the halfway mark, a raisin-like sweetness pops up on the already complex retrohale. If you aint blowing smoke out your nose with this cigar, you’re missing out homies! Construction has been phenomenal from start to finish with an excellent burn and a super smooth draw. Woodsy cedar and the undercurrent of raisin rule the middle section of the medium strength and medium bodied Manzanita. This cigar has a subdued sweetness, that dried fruit presence is noteworthy for sure, and it plays very nicely with the other flavors present all all times. Our final expert analysis confirmed that the Manzanita was indeed delicious. 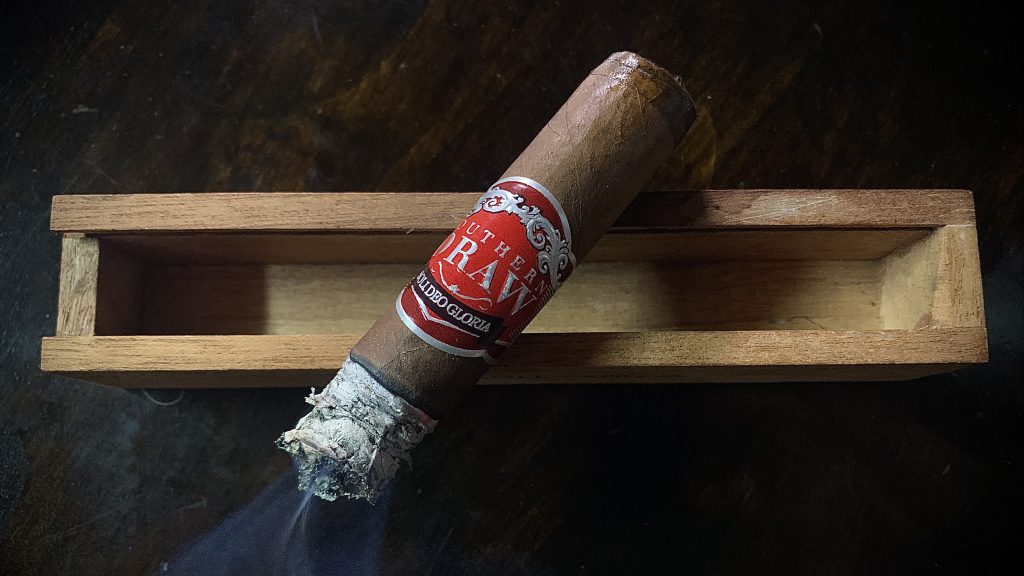 At this price point, the Manzanita is unlike anything else we’ve sampled from Southern Draw. This is a higher priced cigar with an interesting flavor profile and when you factor in the charitable aspect of the cost as well… it’s an easy Three Thumbs up! But I’m still a Rose Of Sharon fan all day long and The Rose would have paired with all of tonight’s beers on any night of the week… Having said that, the Manzanita absolutely delivered and by the presence of our nub tools, we didn’t want to let the experience go. 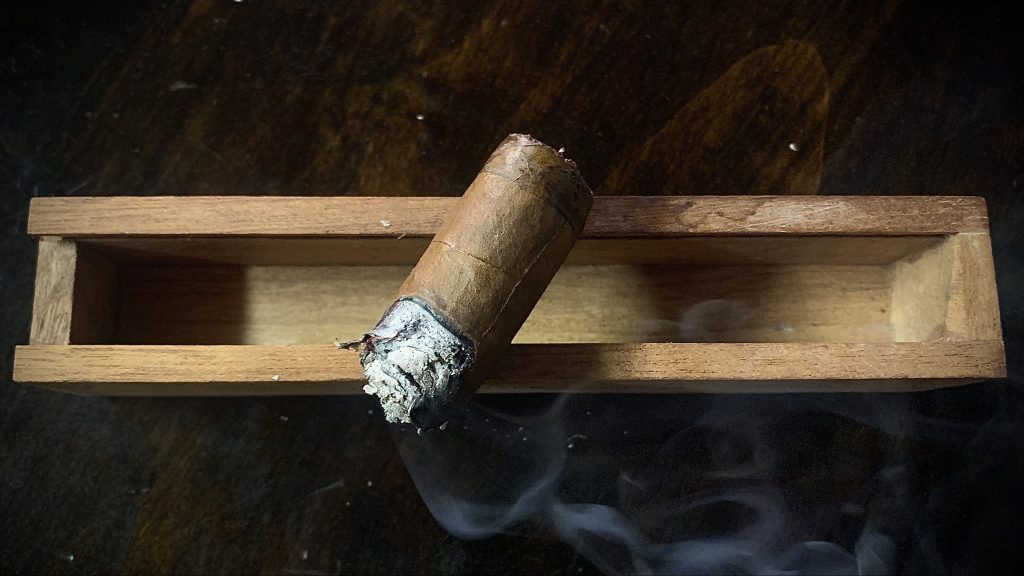 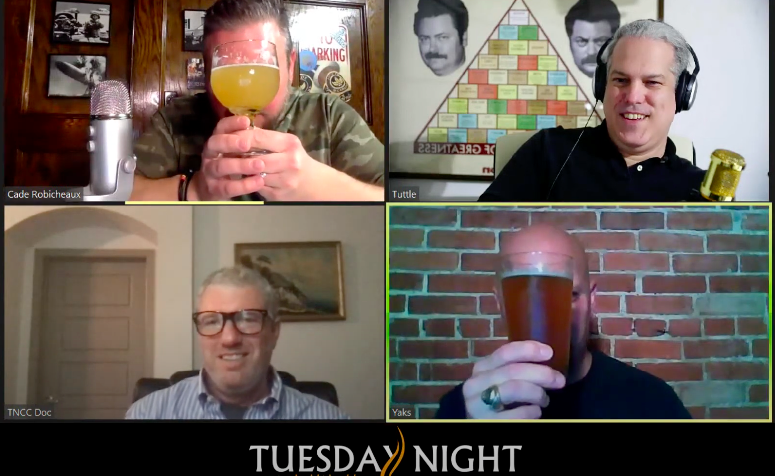 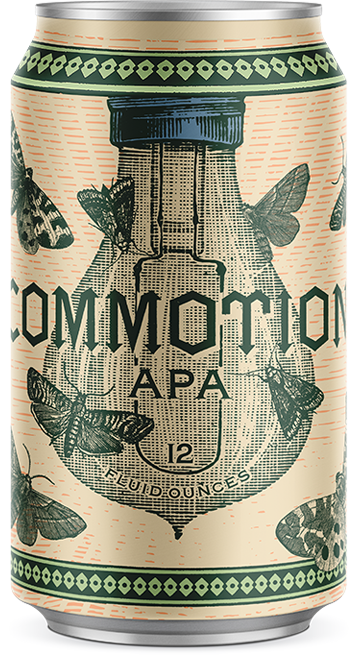 This beer comes to us from Shreveport, Louisiana. Wait a cajun minute, that’s the same state where tonight’s film takes place! Clocking in at 5.5% ABV and 49 IBUs, The Commotion is a cloudy IPA that’s heavy on the orange citrus and it has a very nice floral component. The aroma off the pour is amazing, it reminds me of a juicy IPA. The citrus in The Commotion paired very well with tonight’s cigar as well. 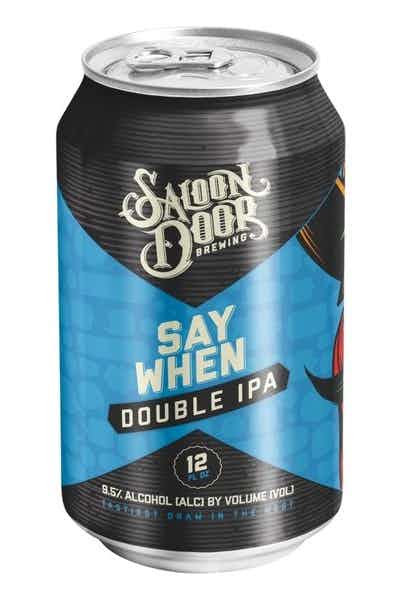 I’ll just say it right here, this was an embarrassing pairing. I thought that actor Powers Boothe said “Say when” at a crucial moment of drama in tonight’s film but I was totally misremembering as it was actually a famous quote that another character (Johnny Ringo) said it in another Powers both movie called Tombstone. So, yes, I finally failed a pairing challenge and I’m ashamed. BUT this 9.5 % ABV powerhouse delivered the goods nonetheless! While Tut enjoyed highly their Ridiculous AF offering back in Episode 115, I liked this malty bastard too. And that rich maltiness and the dark fruity flavors brought out the raisin note in the cigar triumphantly so even my mistakes are triumphs. I just can’t lose… so THIS is the beer pairing of the night! CADE’S COLLECTIVE PAIRING GRADE = A+

This 6.5% 23 IBU beer is from the oldest trapist brewery in the U.S., Tut drank one of their offerings way back on Episode 126 (The Monk’s Reserve) and he loved it but would Yaks feel the same…? While the beer did nothing to enhance the smoking experience, it certainly didn’t interfere with it and Yak Boy enjoyed it quite a bit. Add the main protagonist in tonight’s film is named SPENCER – so we’ll declare this pairing a winner. YAK BOY’S PAIRING GRADE = B 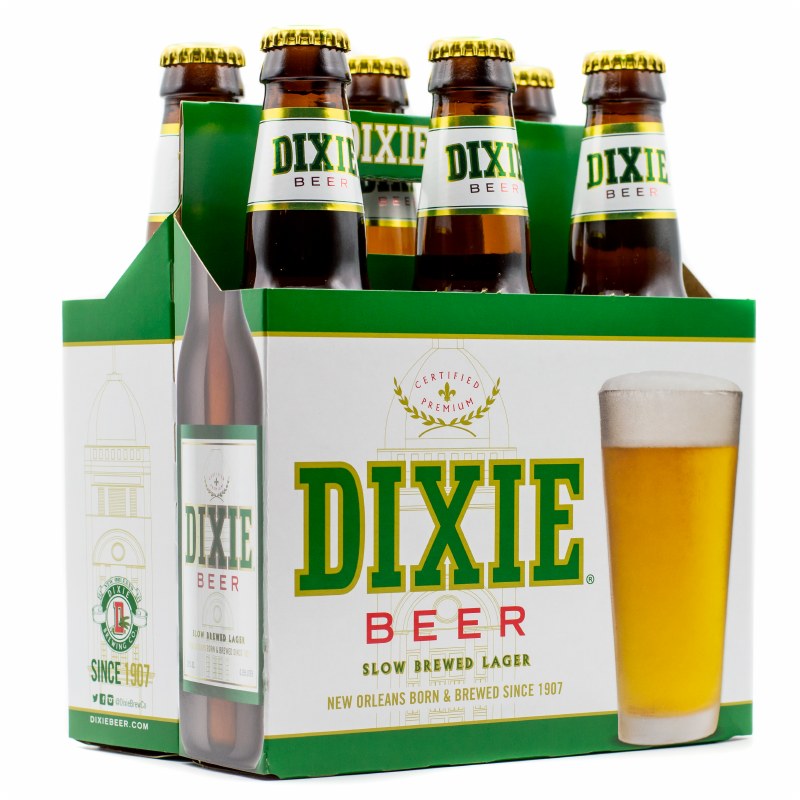 And… now Tut’s cancelled. This beer first came about around 1907 and the folks featured in tonight’s movie drink the shit out of it so there you go. Tut found it refreshing and it completely stayed in its own lane as far as a cigar pairing, but we all agreed that Dixie beer should take a hint from the Dixie Chicks and just call itself The Beer moving forward. Boom, problem solved. TUT’S PAIRING GRADE = B+ 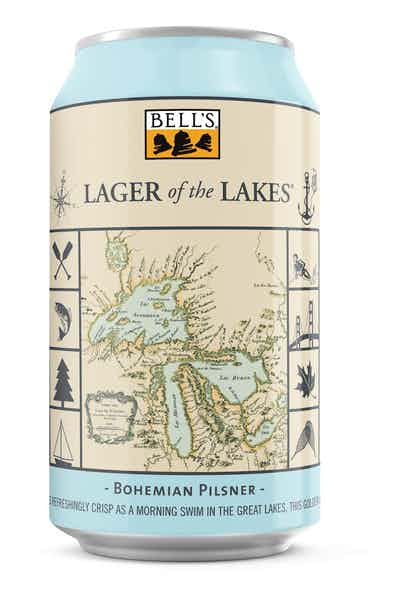 We actually have featured this refreshing beer before back on Episode 103 when we ventured out to Crystal Lake to talk about Jason in Friday The 13th: Part 5 so you can read our initial thoughts on it HERE. And, oddly, we featured not one but two Southern Draw cigars on that episode as well. But our characters do spend a considerable amount of time knee deep in Louisiana’s Caddo Lake in tonight’s film so I guess that tracks… sort of. C’mon Doc, you can do better than this! I know you can! THE DOCTOR’S PAIRING GRADE = C+ 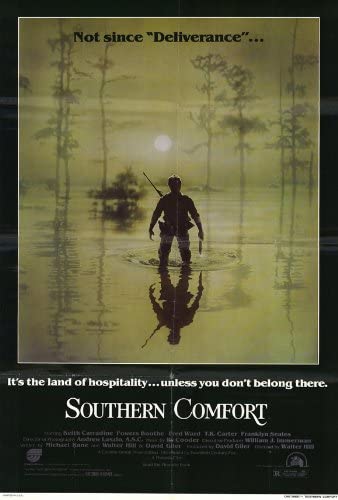 The year is right, the director is right, and holy shit is this all-star cast right up our alley BUT SOMEHOW not one single member of your friendly neighborhood TNCC had ever watched this film before tonight! That’s fucking swamp rat crazy. And speaking of this cast, Southern Comfort reminded us a lot of Dazed & Confused as far as a super-talented casting director bringing together a group of actors who would go on to steal the screen for years to come. 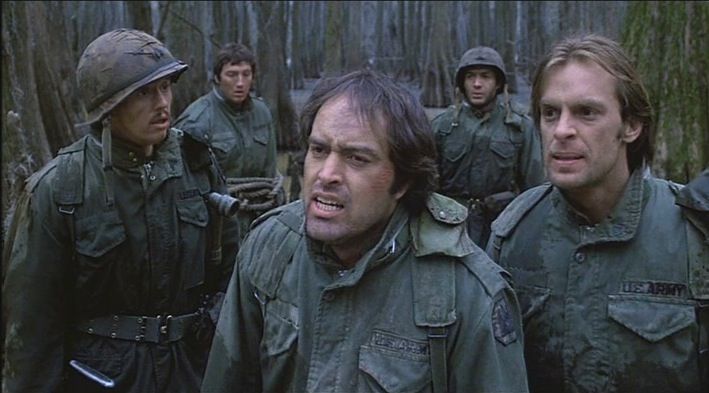 If eternal badass Powers Boothe is stressing out, you know they’re in a world of shit…

But this movie isn’t worth checking out only for the performances, it truly has a lot going for it both on and beneath the surface. Of course you’ll have to click the links below to get our thoughts on this problematic but highly entertaining movie. So scroll on down and do it, do it NOW!!! 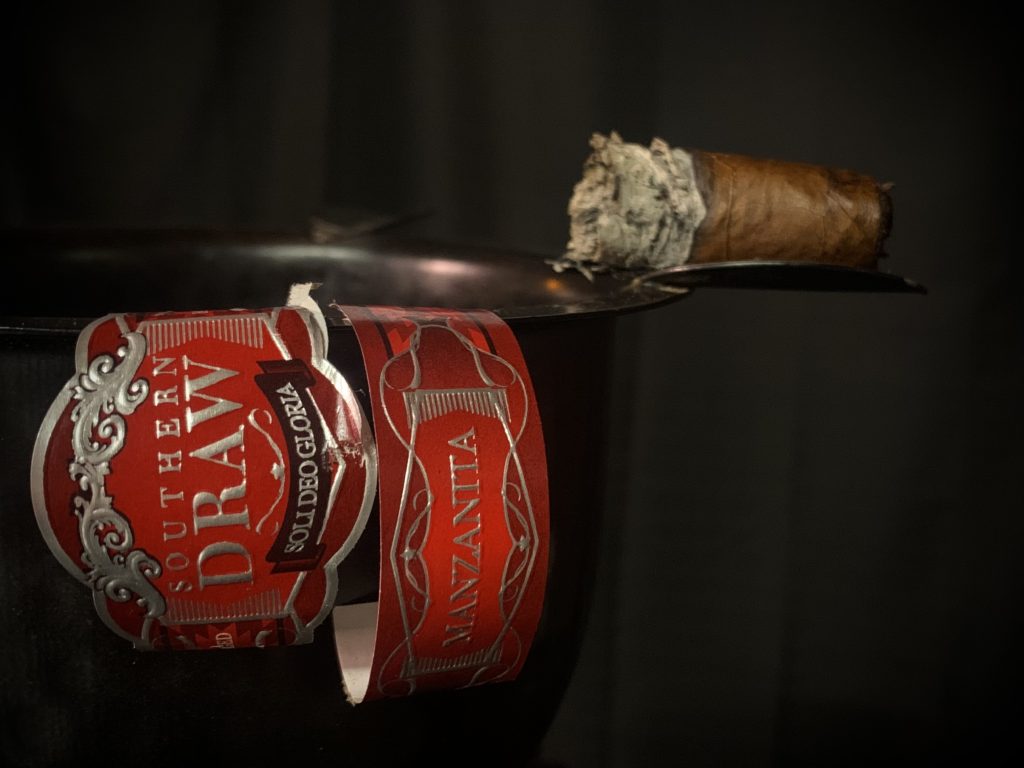 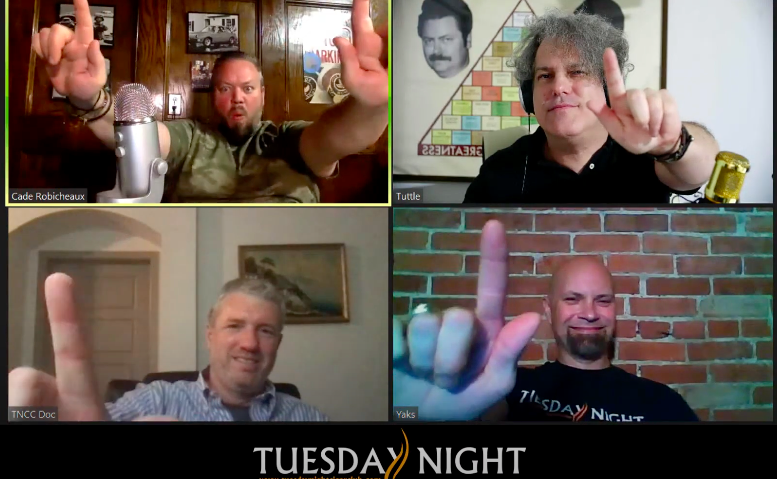