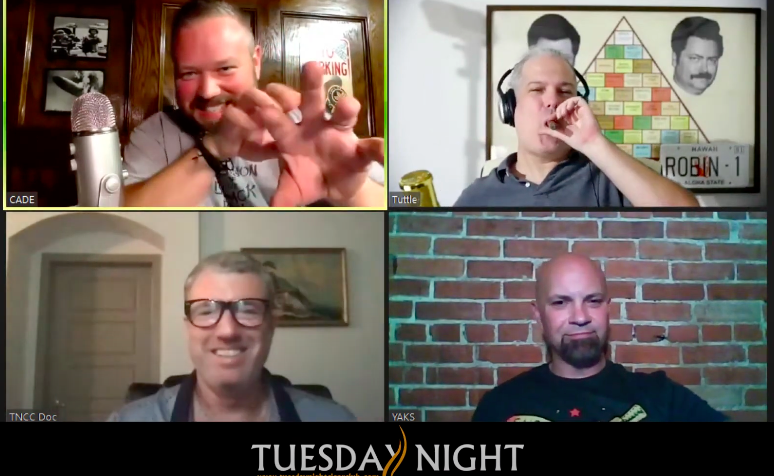 “To bee or not to bee, that my friends is the ultimate question…”

I for one think we’re going to have a bee-utiful show tonight, I really do. Despite some weird technical problems that cropped up last episode and took a big dump all over our good times, I bee-lieve tonight’s going to be different. And I’m fuckin’ excited! Welcome everyone to The Tuesday Night Cigar Club Episode 142. Yes folks, it’s finally here – our big BEE episode! You’ve bee-n asking for it and now it’s here. Or maybe you haven’t bee-n asking for it but it’s still here nonetheless… So we are getting drunk tonight, or at least heavily buzzzzed, and partying our asses off. Click the links at the bottom of the page NOW and JOIN THE PARTY!!!

THE CIGAR – MURDER HORNET by ROOM 101

Size: 5 1/2 x 44 (corona)
Wrapper: Honduran
Binder: Honduran
Filler: Honduran
Price: $9.50 (And please remember when purchasing some fine premium cigars from FamousSmokeShop.com to use your new favorite promo code TNCC20 at checkout where it will knock $20 off your purchase of $100 or more)

Like the clown cigar we featured a few episodes ago, the Murder Hornet is an exclusive release to Limited Cigar Association retailers and I was lucky enough to snag a few from one of my favorite brick and mortar shops in the country Stogies World Class Cigars in Houston, Texas! Jorge and Jenny Leigh from Stogies were on Yak Boy and I’s Cigar Safari trip last year in Nicaragua and we fast became friends and their shop is really next level impressive so go check them out for sure. Here’s what LCA director Clark Thornton had to say about tonight’s cigar:

“Room101’s cigars were largely Honduran cigars all throughout the early 2010’s, but this is the first new line from Room101 in many years that is made in Honduras. Murder Hornet is very reminiscent of Matt Booth’s cigars from that time period, and for long-time fans of the brand, this certainly does feel like old school Room101. We are very excited and proud to be able to offer this special cigar exclusively to LCA shops.” 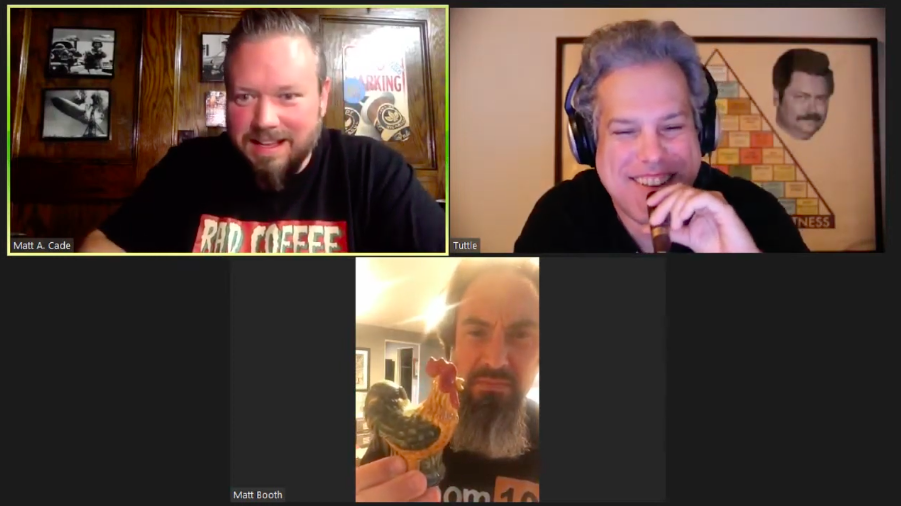 We’ve had Room 101’s Matt Booth on the show before, he’s one of the best interviewees in the industry, but seeing as how he did hundreds of interviews last week at the big Vegas trade show I thought I’d give him a break and not ask him to come on this time around… 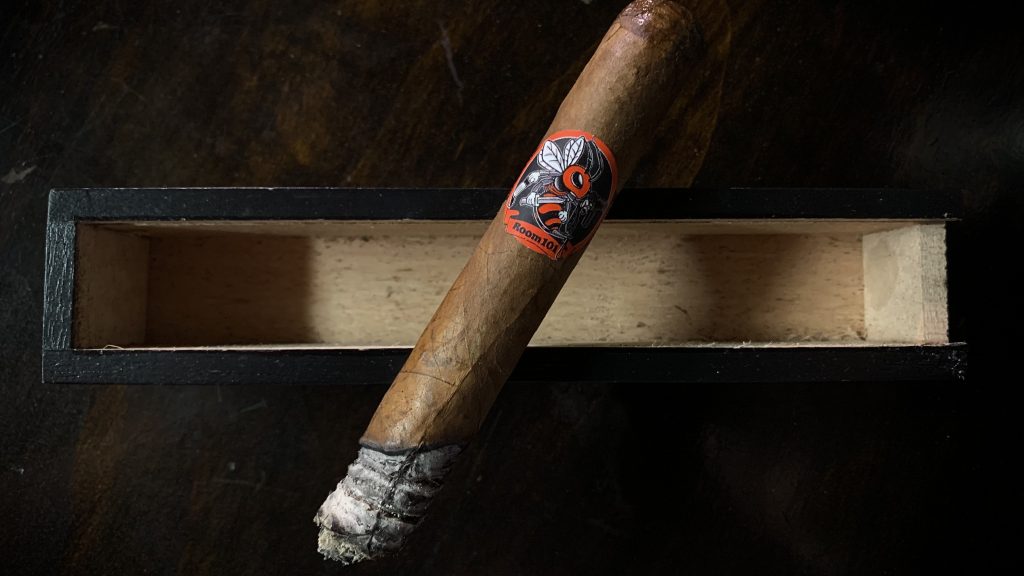 The Murder Hornet is very light in your hand and the Honduran wrapper emits a nice, sweet earthy aroma and when you sniff the foot of the cigar directly there’s a strong barnyard odor (or as we call it here in Texas “rodeo stuff”). There’s a primarily grassy cold draw and once the cigar is lit on fire a mild black pepper spice immediately presents itself through the nose and a crisp, light bready toast flavor combined with some smooth earthy notes arise on the draw. First impression is of a very smooth smoke with phenomenal construction in all aspects. 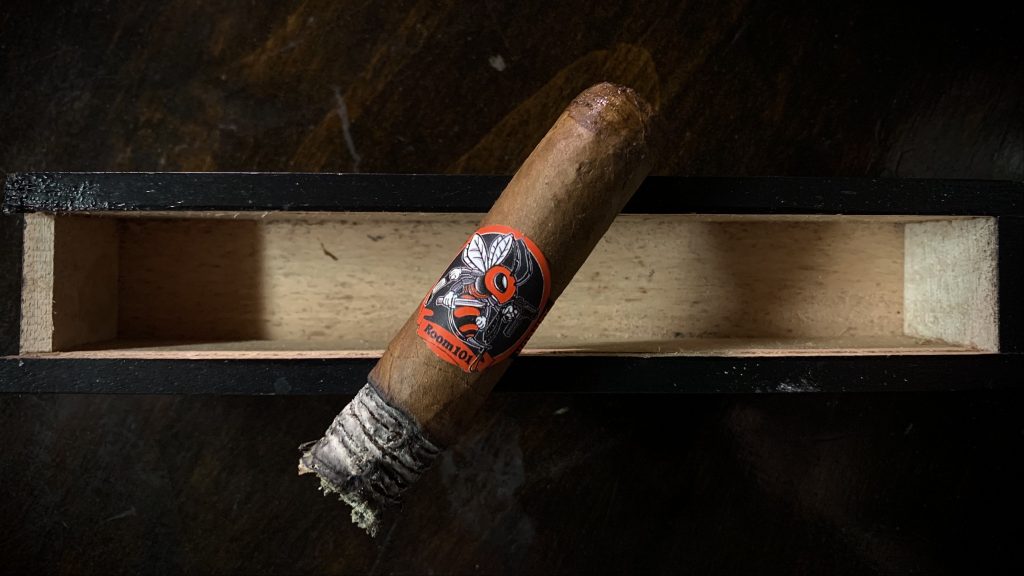 As the smoking experience continues, that sweetness alluded to when smelling the wrapper early on begins to shine through on the draw and it pairs beautifully with that primary toasted bread note and the rapidly receding mild earth. That spice ebbs and flows throughout the retrohale ~ sometimes mild black pepper and sometimes medium jalapeño in strength ~ we all appreciated and enjoyed that constant transition in spice strength as it kept things interesting. 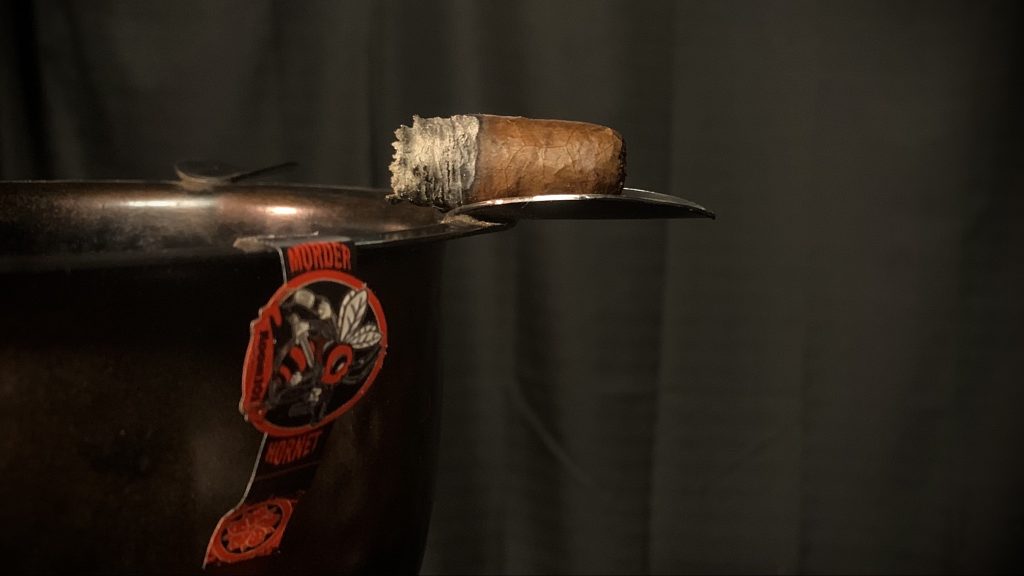 The Murder Hornet is a fast smoking cigar so please discipline yourself and purposefully slow things down and enjoy the delicious nuances of this Honduran puro. We’ve drank a shitload of $10 beers that lasted a fraction of this cigar’s running time and gave us a fraction of the enjoyment, we’ve scarfed down our share of $10 cheeseburgers too so everything is relative cost-wise. The Murder Hornet did indeed remind us of some of Matt Booth’s earliest creations as promised and that’s high praise. If you can still find a Murder Hornet at your local or favorite online shop BUY IT NOW MOTHERFUCKERS!!! 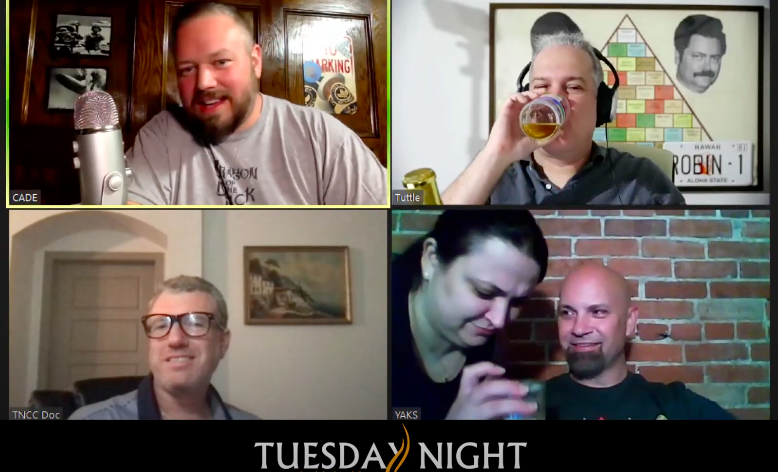 A special guest pops up tonight to spit in Yak Boy’s beer! 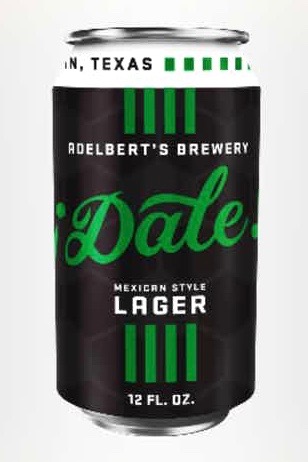 This traditional Mexican style lager clocks in at a wimpy 4.4% and 20 IBUs and Tut only selected it because he’s a huge fan of the professional Austin soccer team that this beer was brewed to support. Yes, we do have a Mexican truck driver featured in tonight’s film but… cmon Tut, you can do better than this. Turns out that “Dale!” is latin for “Go for it!” And that’s one of the team slogans popularized by the Austin FC’s marketing squad. Was Tut glad that he went for it? Yes, he enjoyed this crisp and refreshing beer and it ended up pairing very well with tonight’s cigar so…
TUT’s PAIRING GRADE = D+ 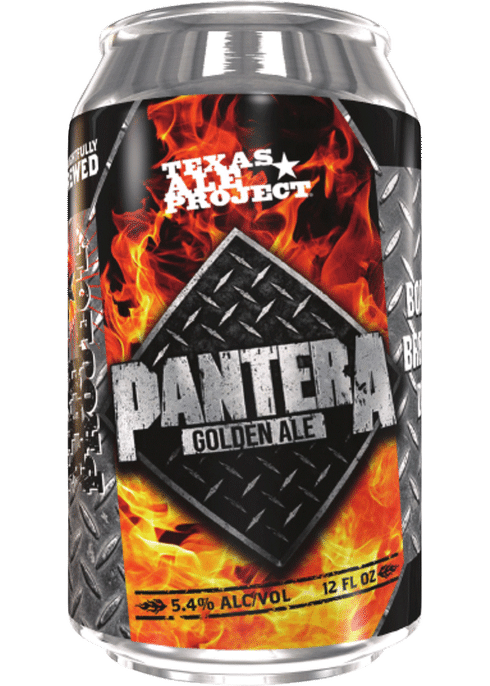 How any beer named after hardcore metal gods Pantera can possibly come in at a puny 5.4% and only 16 IBUs is simply mind boggling. These legendary party animals had a swimming pool shaped like a Crown Royal bottle for Christ’s sake! Dime Bag would never stand for this. Nonetheless, Doc enjoyed this light summer beer and he rationalized his selection by saying that “golden ale” reminded him of “golden honey”, you know like a bee produces and we’re doing a bee movie… but I think we all know the just wanted to drink a Pantera beer.
THE DOCTOR’S PAIRING GRADE = D 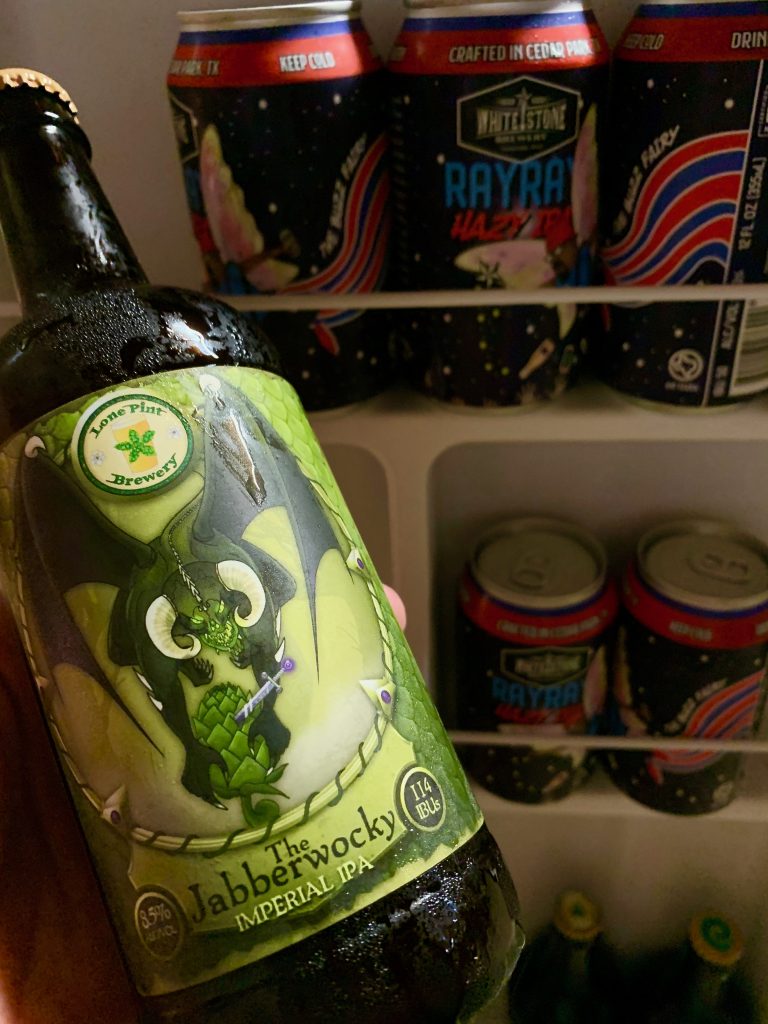 At 8.5% and 114 IBUs (!) it’s obvious that I selected this beer to start off my night because of the mean ass winged creature on the label. And we have a shit ton of mean ass winged creatures in tonight’s movie! While I felt the IBU rating was inflated by about 30 or so, The Jabberwocky still featured a beautiful pour followed by a enticing papaya aroma (commingling with some other rich fruit) and a creamy introduction followed by a spectacular tingly hop bite on the back end.
CADE’S PAIRING GRADE = A- ( I can do better and I will!) 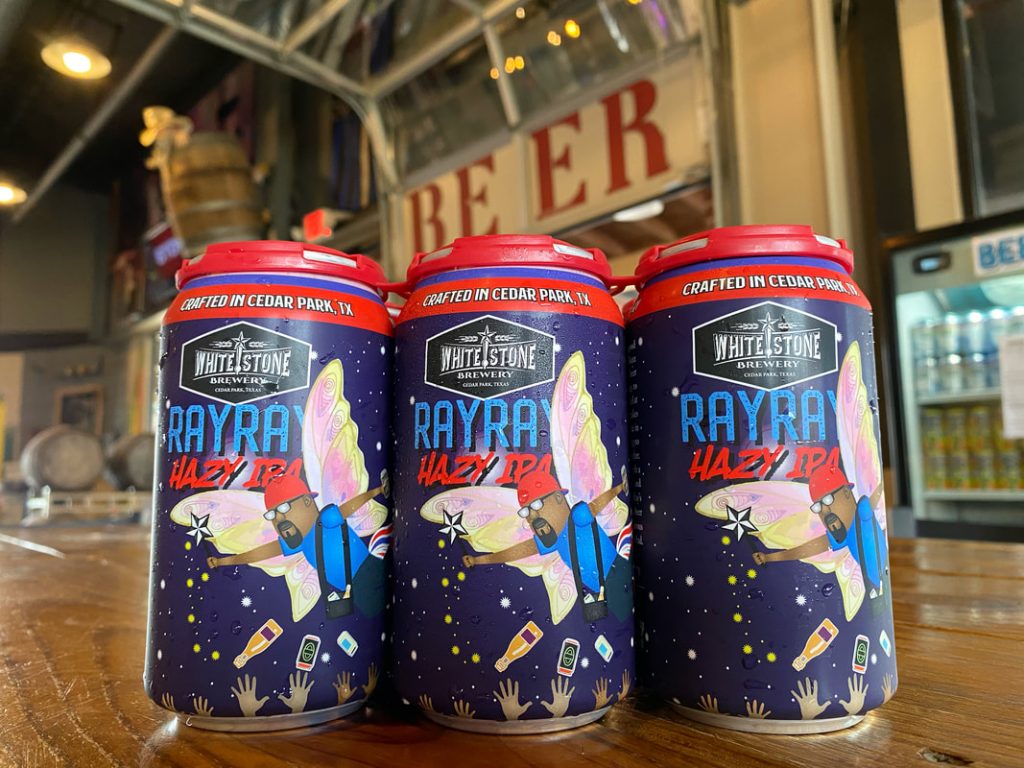 Yak’s lone beer selection was also my second beer selected for the night (we shopped together at the store, not that there’s anything wrong with that). This 7.3% 50 IBUs hazy is also known as “The Buzz Fairy” and you know the bees in tonight’s movie buzz their little asses off. Well the brewers promise that this beer will blow your socks off but Yaks was wearing flip flops so we couldn’t verify that claim unfortunately BUT he felt that this citrus fruit heavy and extremely floral IPA paired very well with our cigar and even added to the already natural sweetness present in it…
YAK BOY’S PAIRING GRADE = B 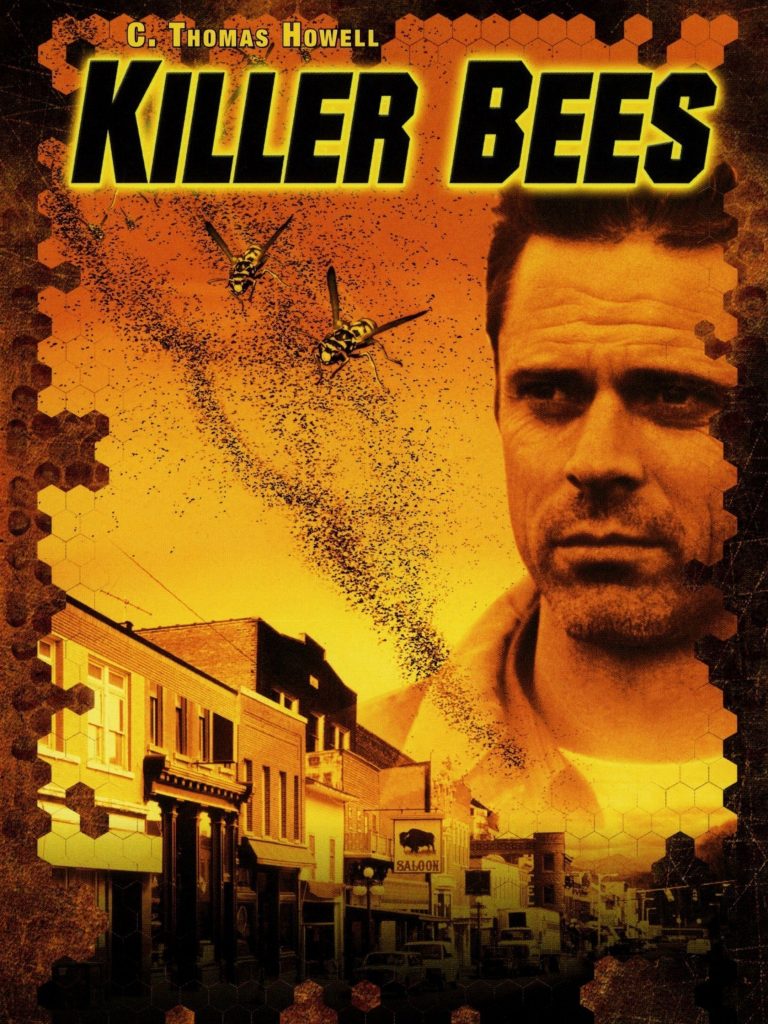 We do a lot of B Movies here on the podcast but this is our first Bee Movie! Oh and if bee puns annoy the piss out of you then you might want skip the first two and a half hours of tonight’s show. Killer Bees was written by Dana Stone and it’s directed by Penelope Butenhuis who also directed the 1999 film Tokyo Girls which when I went to check that it out (you know, for research purposes because I’m a professional podcaster) it turned out to be a straight-forward documentary and not at all what I was in the mood for so I turned it off immediately… 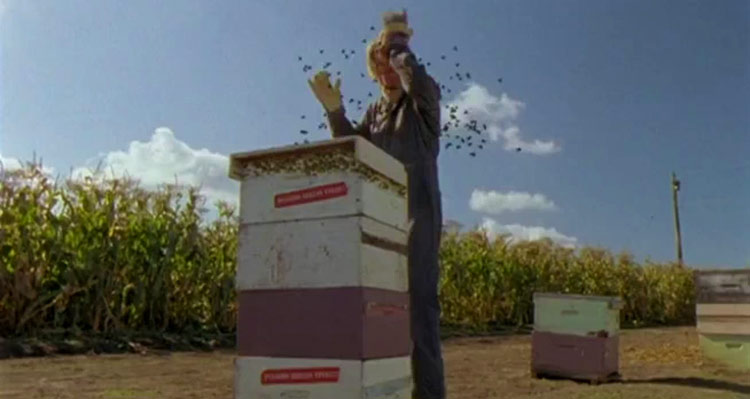 Pro Tip: If you get some killer bees delivered to your farm DO NOT rip open the crate like an eagerly awaited Amazon package!

Longtime listeners to the podcast know by now that we love us some creature features and Killer Bees had just enough of the essential ingredients to guarantee that we had a great time talking our way through it. Cute forensic entomologist? CHECK. Power hungry Mayor who refuses to shut down the big festival? CHECK. Lots of killer fucking bees stinging people? CHECK. So what are you waiting for? Click the links below and JOIN THE PARTY! 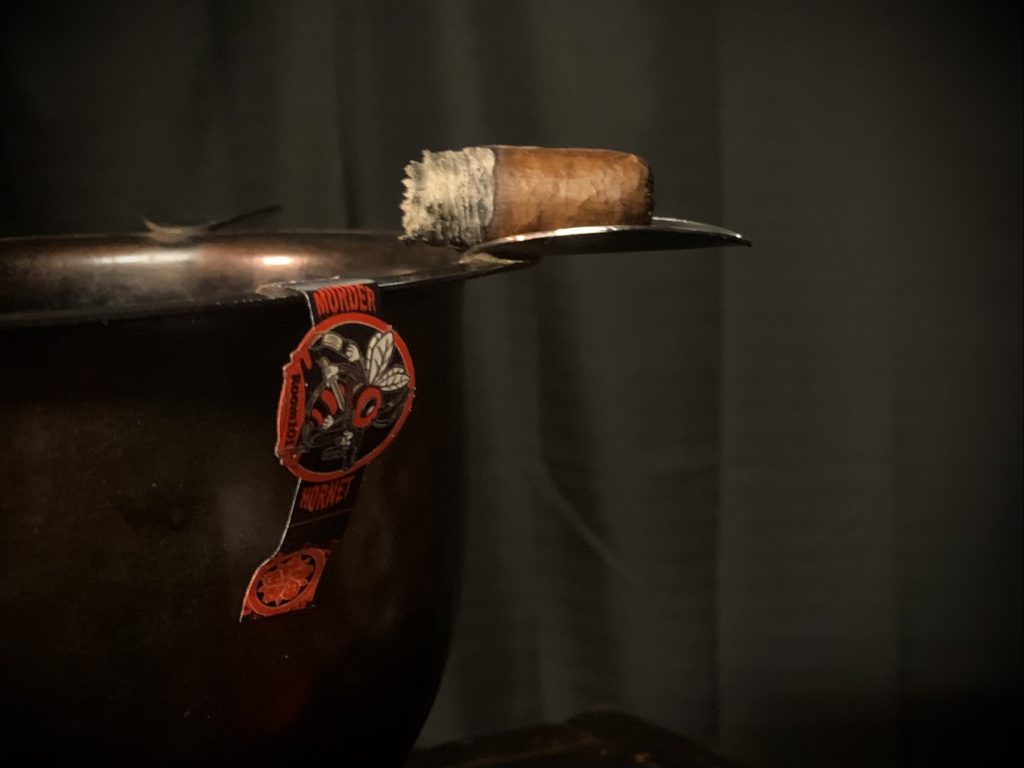 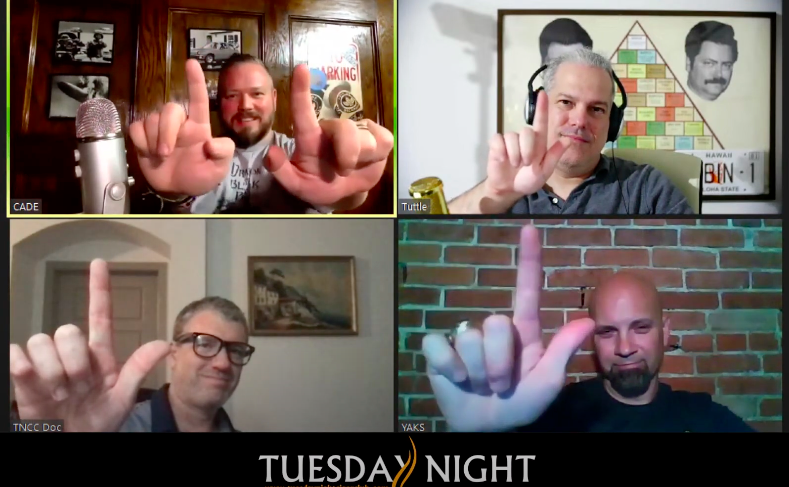