I sensed a nice white pepper note early on while Tuttle swore that he was picking up strong flavors of baked potato... yes, baked potato. With sour cream, green onions, and all the fixins...

We’ve got one hell of an episode for you tonight BUT before we get started I wanted to share a few pics of our new table that Cody is currently constructing for the show. The idea is to have conversation flow easier between the 3-4 of us while also allowing for a potential guest now and again, better consistent microphone placement, and an eventual front piece that will feature the TNCC logo and flow all the way down to the floor.

Modifications will be made throughout the coming weeks but I’m excited about its potential and I’m relieved that our viewers won’t be forced to look at the crew’s pale scrawny legs during the hot smoldering Texas summers. Well, their legs are pale and scrawny. My legs are bronze and muscly. And speaking of muscles…

The Nomad Connecticut Fuerte, submitted to us for review by its distributor The House of Emilio, comes at us with the bold statement that it is “not your father’s Connecticut cigar“. The toro (6×52) featured a gorgeous golden brown Connecticut wrapper that was packed firm when given a gentle squeeze. Upon lighting the stogie, we all sensed that there was a power and complexity present with the Nomad that we weren’t accustomed to when smoking other Connecticut shade cigars. I sensed a nice white pepper note early on while Tuttle swore that he was picking up strong flavors of baked potato… yes, baked potato. With sour cream, green onions, and all the fixins…

In all my years of smoking cigars and reading reviews I’ve never come across someone getting BAKED POTATO out of their stogie. Tut’s a pioneer! Construction-wise the Nomad continued to impress with a perfect burn line and no retouching required. For a Connecticut* cigar this puppy does have some muscles as promised, which makes for a really nice change of pace in the world of lighter shade smokes.

*Have you ever tried typing the word Connecticut well over a hundred times? Between the show notes, our YouTube clips (please Subscribe!), Facebook posts (please Like!), and this episode page I have typed this word so many damn times and it’s NEVER spelled correctly and I NEVER spell it the same way twice. I’m considering instituting a new “Maduros Only” policy for the show moving forward.

THE BEER – KARBACH SYMPATHY FOR THE LAGER

Just look at that gorgeous golden nectar flow from the magic wall and slowly fill the pint glass… I’ll give you a moment to wipe the drool from your chin. There, that’s better. Our second across-the-table winner courtesy of Karbach Brewing Company! Back in Episode 4 we all flipped out over their delicious Weisse Versa and they’ve done it again with their Sympathy For The Lager. Featuring a super crisp front end and a delicious malty sweetness that never outstays its welcome, this beer is unique and familiar all at once. It reminds me of so many domestic “beers” I’ve had in my hands over the years but it’s taken up a huge notch by its complexity and quality. You can absolutely taste the quality which makes for a perfect pairing with the similar Nomad Connecticut Fuerte (AH! there’s that fucking word again!! and I still spelled it wrong!!!). Tut called the lager “happiness in his mouth” and I’ll leave that at that. Hell, our pints looked so beautiful coming off the Obriens Irish Pub’s tap wall that our favorite bartender Nata couldn’t control herself… 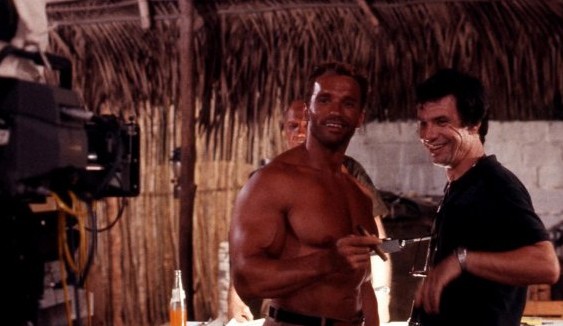 Other than its title coinciding with the cigar we were planning to review on the show, I selected John McTiernan’s debut feature film Nomads because I’ve always wanted to see it and I knew that the entire group were huge fans of his subsequent directorial efforts such as Predator, Die Hard, Hunt For Red October, Last Action Hero, and the list goes on and on. How had we all missed Nomads?!? Well, for starters, the conservatively budgeted film doesn’t star any of the action heroes of our youth such as Willis or Schwarzenegger (pictured with McTiernan above because I couldn’t find a single photo of the director on the set of Nomads)… No no, it stars this guy.

And Pierce Brosnan isn’t playing a hardened detective or a rogue military commando… he’s playing a French anthropologist. So that alone probably explains how we missed this one as kids in the 80s. But he’s actually quite good as Jean Charles: a heavily bearded, camera toting, safari outfit wearing, world famous observer of men who stumbles across a group of troublesome ghosts led by the one and only Adam Ant. Yeah, that Adam Ant 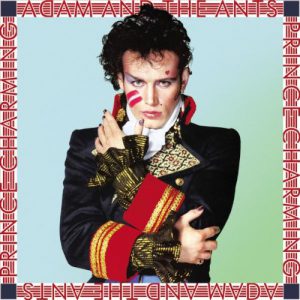 You don’t drink, don’t smoke, what do you do? Well, you probably don’t listen to our podcast for starters…

I love watching the first movies of my favorite directors as you can see glimpses of their talent and, if you’re lucky, visions directly from their future films. Check out this shot of a ghost, or “Inuat” as they’re referred to in the film, plummeting to his death from a tall skyscraper.

Remind you of anything else from McTiernan’s filmography?

Now that is just amazing. You can also see McTiernan’s technique developing before your eyes with his bold use of zooms, pans, and his beloved slow motion. On the flip side of the coin, there is an uncomfortably long sequence where we follow along with a hot dog that Jean Charles is holding in front of his crotch as our central focus point

I apologize for the poor quality of the images above but perhaps it’s better that way… yes, yes, I’m actually certain that blurry is better in this instance.

Bizarre tracking wiener shots aside, it’s an entertaining debut film that has a lot going for it and I really think we dig in deep and do it justice like no one has before in our discussion on the show. So give it a listen on iTunes and please let us know what you think! If you don’t, we might just send this badass mofo to your house to make you reconsider…

Remington Steele is gonna fuck you up!

We were lucky tonight in that everything we reviewed (the cigar, the beer, and the film) put refreshing spins on what can often be familiar and even boring subjects. Because, as I’ve said before, there’s nothing worse than a boring beer. So listen to the podcast and I think you’ll jump at the opportunity to experience any of these quality offerings. However, whatever you do, DO NOT drink ice cold beer. Trust Cody on this one!!!

See you next time when we’ll review another cigar, beverage, and film from the upstairs balcony of Obriens Irish Pub. May the wings of liberty never lose a feather.