I was compelled by the overall atmosphere that the filmmakers created and quite literally found myself on edge... 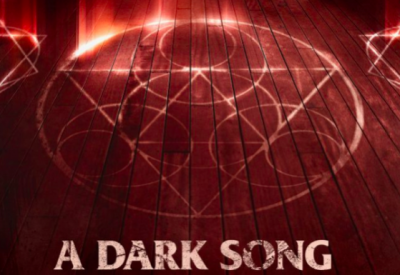 “For in much wisdom is much grief. And he that increaseth knowledge increaseth sorrow.”

Just because I am a man of science doesn’t mean that your favorite Doctor cannot also be a man of religion and occasionally quote scripture. The above snippet from Ecclesiates would serve as a warning to those of us inclined to seek answers to some of life’s more daunting questions. What truly awaits in the hereafter? Is it actually possible to communicate with the spirits of the departed? Do angels and demons exist? Will the Texas Rangers ever win a World Series and, if so, will it happen during my lifetime? Some knowledge may best be left unknown. Be that as it may, circumstances and events – sometimes tragic or otherwise life altering – have turned many a human being into a seeker. This is different from being a calculated risk taker. We all take risks when we get out of bed in the morning, but one who truly seeks answers will go to the limits of endurance and beyond.

With that in mind, let’s jump into A Dark Song, directed by Liam Gavin, produced by Tall Man Films and Samson Films, and distributed in the U.S. by IFC Midnight. We are introduced to Sophia (Catherine Walker) a thirty-ish, primly attractive woman who is preparing to rent a large manor in the isolated Welsh countryside. We are shortly informed that Sophia has lost her seven-year old son in a tragedy that involved some delinquent teenagers and she is wanting to communicate with her dead child. The house in the country, with its windows facing westward, was acquired specifically for this purpose. This is not a thrilling adventure for Sophia; it is something that she just has to do and whether or not it will help her cope with the recent horrible events of her life is something that a viewer can only guess at. 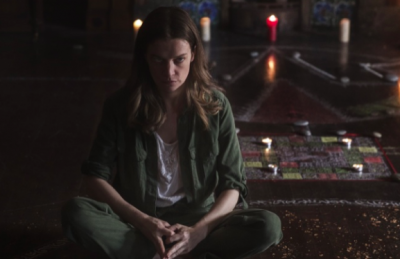 Catherine Walker as Sophia in “A Dark Song”

Sophia has sought out the coaching and advice of Mr. Solomon (Steve Oram) who is some sort of bearded mystic with a potbelly who supposedly has experience in occult matters. As to what they are to perform, Mr. Solomon informs Sophia that “once it worked, twice it didn’t.” He even turns Sophia down at first when she isn’t initially honest about her designs, but changes his mind once Sophia informs him of her desire to talk to her son. 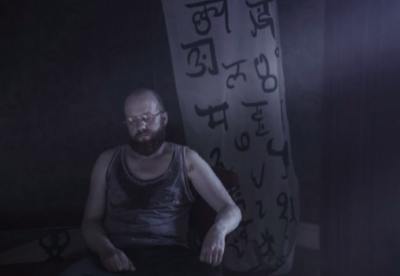 Steve Oram delivers a chilling performance as Mr. Solomon in “A Dark Song”

Sophia has been preparing herself for what is to come on the advice of Mr. Solomon by committing to certain purification exercises, one of which has been to abstain from drinking alcohol for 22 days. That requirement immediately ruled out Yours Truly from ever attempting to make a spiritual connection with the loved and lost. In fact, not only does such a stipulation eliminate The Doctor, it also eliminates the entire Tuesday Night Cigar Club and pretty much everyone we either know or are associated with in any capacity whatsoever!

The manor house is also prepared, with Mr. Solomon laying down a line of some unidentified white powder around the house’s perimeter. He informs Sophia that they could be there for months and that there is no turning back once “the hedge” is sealed. If this doesn’t serve as a giant red flag that maybe all is not right in Mr. Solomon’s noggin, then the fact that he has to spend an evening with the shakes while detoxing from booze before the proceedings can begin is certainly a twenty-one gun warning salute. He remains sincere, however, and Sophia is too committed and in too much pain to care about Mr. Solomon’s faults. He immediately begins acting erratically once the rituals begin, splashing water on Sophia to wake her and telling her forcefully to eat a toadstool for further purification. He also draws all manner of shapes and designs on the floor and explains what each one represents for Sophia and how long it will take to complete each step as if they were levels in some horrific video game.

From the outset of this phase of A Dark Song one is forced to ask if Sophia is being Shanghaied in an elaborate hoax. By instructing Sophia that leaving the house will break the ritual – and perhaps cause catastrophic events as well – Mr. Solomon has created a scene whereby he can perpetrate any number of tricks and employ any number of accomplices to bilk the grieving woman out of the generous monetary figure that she has agreed to pay, all the while drugging her into thinking that something supernatural is transpiring. Is the occasional strange sound and bird flying into the window a sign? Or is it all part of a ruse? You know I’ll never tell, but the thought does enter your head midway through A Dark Song. 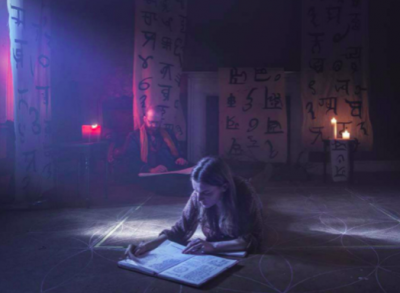 Sophia hard at work. Give Mr. Solomon credit; if it’s a hoax, he is willing to go to great lengths.

The cinematography was excellent, with great employment of light and the lack thereof inside the manor. There is nothing particularly fancy about the camerawork, it is just technically executed wondrously, with a series of wide shots demonstrating the aloneness of the rolling countryside. The film was actually shot in Ireland as opposed to Wales, but I challenge any fellow Yank to know the difference. A Dark Song was almost certainly shot on a low budget but it sure as hell doesn’t look that way. I was compelled by the overall atmosphere that the filmmakers created and quite literally found myself on edge. A dark and eerie score only contributes to this overall feeling. Equally compelling are the performance of Walker and Oram. They are less guru and student then they are partners on a mutual quest, and both actors play the roles with aplomb. Walker’s Sophia has experienced the one horrible event that no one is ever supposed to experience, the loss of a child. Walker wears this mask of defeat on her face at all times, and it explains her resignation to whatever it is that Mr. Solomon has planned for her. Oram, for his part, expertly portrays the faults of this damaged man. If he isn’t an expert yet extremely troubled con-artist, then he is definitely a man who has come too close while seeking his own answers and is deeply frayed by what he has seen or come to know.

A Dark Song is about grand themes and dilemmas for human beings, in our time or any other. How do we deal with loss? How do we maintain our faith when confronted with tragedy in a world that seems all too fraught with war and death? How far are we human beings, fallible and insecure by nature, willing to go in search of something resembling an answer?

I don’t know how to classify A Dark Song; the best I can do is to say that it is part supernatural horror and part adult fairy tale and it gets a winning endorsement from me. I urge anyone interested in this review to check it out. It certainly kept me emotionally involved for 100 minutes and left me thinking about it long afterwards, unable to easily shake its effects to the point that I needed to watch Daffy Duck’s Greatest Hits before I could go to sleep. “My name is Daffy Duck, I work at the merry-go-round…” Ok, you get the idea. Watch A Dark Song. As always, The Doctor wishes you all a clean bill of health. 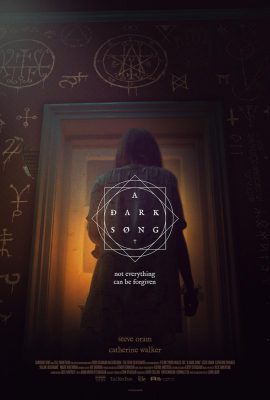