Have we fucked up the oceanic environment beyond repair with our meddling? Should scientific experiments be employed on animals in attempts to find cures for diseases that afflict humanity? These are interesting debates but I didn’t watch Deep Blue Sea 3 to engage in any of them.

I suppose I could start this movie review by further discussing my mental state in this Year of The Virus, but who wants to hear more of that drudgery? We are all coping in our respective ways, albeit some better than others. There was no way for me to know beforehand, of course, if Deep Blue Sea 3 would serve as an able coping mechanism and prove worthy of a review… but, c’mon, the minute this movie was available for rental, this was happening and we both knew it. 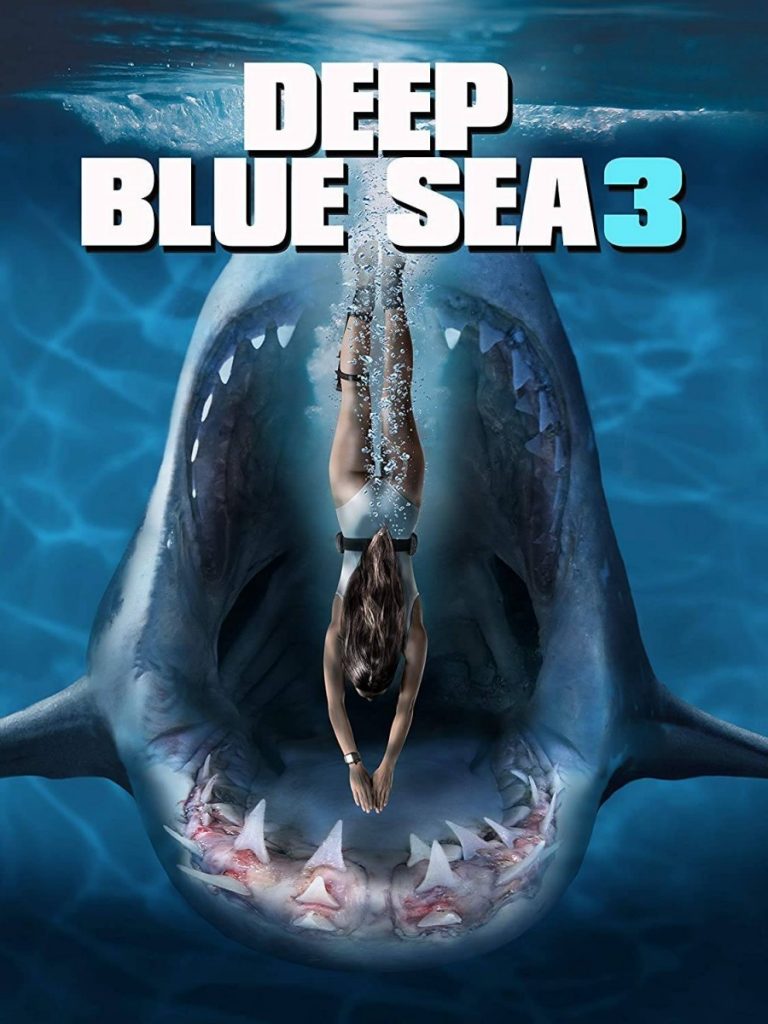 A trio of not inconsiderably sized shark fins emerges from the sun dappled waters of the Deep Blue Sea. Unfortunately, the scene is not accompanied by a cheesy opening theme song. The sharks are headed towards some sort of an atoll straight out of Waterworld that appears to be floating in the middle of the ocean. It is actually a man-made fishing village, now abandoned, constructed on a coral reef off the coast of Mozambique. Well, not entirely abandoned; inexplicably, two people still live there. I suppose the property taxes can’t be too bad, but it must be hell on mail delivery. If memory serves me – and God knows, it doesn’t always – the same ludicrous idea of a floating platform was used in the previous iteration of the Deep Blue Sea trilogy. That’s right, we now have a Deep Blue Sea trilogy, loosely tied together that it might be. In Deep Blue Sea 2 the floating platform ludicrously served as the top level of a giant underwater research facility. The man-made fishing village of Deep Blue Sea 3 seems to have a semi-functioning restaurant and bar. This brings up logistical questions, but I shall not be the one to mention them. If The Doctor is going to serve any length of time on a similar floating hell, I would need a bar and I would be none too interested in discussing how it manages to operate.

People perform research and live here? Ok…which one is the bar? There you shall find The Doctor…

The comely Dr. Emma Collins (Tania Raymonde) and her team are studying the effects of climate change on the marine life around the reef. The marine life includes a gigantic great white shark that the team has managed to tag and study, which seems like an idiotically dangerous way to spend one’s time. You can count me out.

Dr. Richard Lowell (Nathaniel Buzolic) – a former colleague and boyfriend of Dr. Collins – arrives at the village with his tough-guy Australian confidant Lucas (Bren Foster) in search of the three bull sharks from the film’s opening. A running theme throughout all the Deep Blue Sea entries is that of genetically altered sharks who have become intelligent and even more aggressive than they usually are. Which once again raises the question, why in the blazing hell would anyone in their right mind want to genetically modify large sharks, in effect making them more frightening? Are these mutated bull sharks going to cause problems for the already climate-challenged sea life around Dr. Collins village? I smell a conflict of interest. Seriously, why doesn’t anyone perform these experiments on a squirrel? Then again, imagine watching “Squirrels!©” on the SyFy channel? The TNCC has the copyright, so don’t anyone get any ideas.

Emma shows Richard and Lucas her screenplay for “Squirrels!”. You can tell by their expressions that they are highly impressed.

Other than an intense encounter with a great white in one of the movie’s earliest scenes, it does take a while for more sharks to appear in Deep Blue Sea 3, but the overall action ratchets up in the second half. The underwater scenes are fantastic, a Blue Planet experience that takes us into a varied ecosystem of sharks and luminescent fish. It is a world of milky aquamarine, all of which is backed up by a simplistic synthesizer score that reminded me of parts of the score from Terminator 2 for some reason. Deep Blue Sea 3 is at its best when it stays underwater, which thankfully it does for long stretches. The exciting underwater sequences are what we watch these movies for, especially when the landlubber scenes threaten to expose the screenplay. How are the CGI sharks, you ask? Frankly not bad. It is still CGI, but I have seen a lot worse and will refrain from registering any complaints.

One of many cool underwater scenes from Deep Blue Sea 3

The usual theme of the (mostly) well meaning scientist who will throw aside all principles in order to bring home the specimen is on full display in the character of Dr. Lowell. No creature feature is complete without such a character. In fact, I am not sure that it is legal to make a shark movie without either the aforementioned scientist-type or a shady politician of equal amoral value. If there is a resulting environmental message, the viewer is thankfully not hit over the head with it. Have we fucked up the oceanic environment beyond repair with our meddling? Should scientific experiments be employed on animals in attempts to find cures for diseases that afflict humanity? These are interesting debates, but I didn’t watch Deep Blue Sea 3 to engage in any of them.

Next time I’m having a bad day, I’ll just remind myself that at least I’m not this poor bastard!

There are a couple of near-painful scenes that I could have done without, and in the end I am not sure whose side I am on in any ethical quandary, but I will state this: Deep Blue Sea 3, especially in its second half, is the silly, exciting fun that I had hoped it would be. It will not cause anyone to harken back to the days of Samuel L. Jackson, Thomas Jane, LL Cool J, and Saffron Burrows… but Deep Blue Sea 3 is a far sight better than Part 2 and worth taking a swim. Sorry, I couldn’t resist. As always, dear friends, The Doctor wishes you all a clean bill of health.