Couldn’t the mad scientist have tested his genetic engineering experiments on something less dangerous than man-eating sharks, like maybe ducks or chipmunks? Something much easier to handle in case things go apeshit? I guess not. 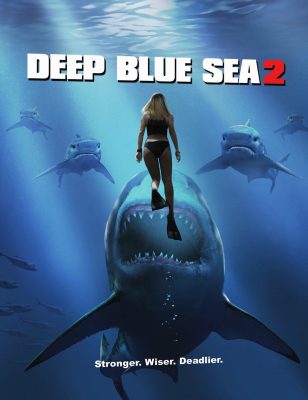 There are some closeminded individuals, probably sanctimonious and dull, who do not believe in such things as fate or destiny. Your favorite Doctor is proudly not of their ilk. Deep Blue Sea 2 is more of a quasi-remake than a sequel to the 1999 thriller starring Samuel L. Jackson and Thomas Jane, but if you are going to make a movie poster featuring giant sharks and a shapely blonde woman in a black bikini, then it will be my destiny to get suckered in by it. Caveat emptor.

Our story begins off the coast of South Africa. An illegal shark finning boat is manned by a pair of morons who are speaking in some sort of accent that is certainly NOT South African… apparently, the sawing off of shark fins by asshole poachers is a real problem in certain waters. Shark Fin Soup may be an aphrodisiac delicacy, but it sounds terrible to me, and I once ate a hot dog at the old Shea Stadium in Flushing Meadows, New York. One does not have to be a recognized shark expert – or even a fan of the National Hockey League’s San Jose Sharks, for that matter – to guess what eventually happens to these two nimrods. Good riddance to bad actors, says I!

The opening credits sequence features a tight-bodied babe swimming in slow motion among the sharks in the depths of the crisp, underwater blue. Add in the passionate song being belted out which includes the chorus “Drowning in the Deep Blue Sea!” and we have a bastardization of a James Bond opening credits sequence. Believe it or not, this actually worked for me on some unexplainable level. And the song itself is definitely a finalist to make my Tuesday Night Cigar Club Christmas album featuring The Doctor, along with such other tracks as “Hooked on You” and whatever that horrible love song was from Getting Lucky. 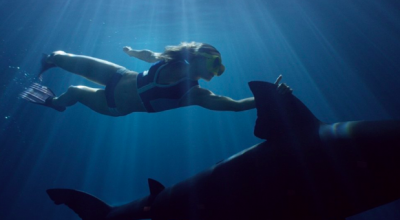 Dr. Misty Calhoun (the very lovely Danielle Savre) works at the Five Oceans Institute, where she lectures on the necessity of shark conservation. She is contacted by a representative of Durant Pharmaceuticals and offered $50,000 just to listen to a proposal from billionaire scientist Carl Durant. If Dr. Calhoun likes what she hears and agrees to join the team as a consultant, Durant Pharmaceuticals will agree to finance her institute for five years. This reminds me of the old saying that “If Something Sounds Too Good To Be True, That’s Because It Is”. Take the listening money and run, you fool! Why does no one ever do that? The answer, of course, is that then we would have no movie to enjoy and/or pick apart. Not to mention that the mysterious philanthropist who is overstepping his boundaries is a staple of many a creature feature. Dr. Calhoun should have heeded John Fogarty’s warning that a bad moon was on the rise. Alas, she does not. A pair of married marine biologists have also been invited along to serve as shark fodder and away we go. The Durant Pharmaceuticals middle-of-the-sea compound is basically just a floating platform resembling a lakeside bait shop that has somehow been dropped in the ocean. It couldn’t possibly be connected to the labyrinthine laboratory complex underneath, but I’d rather not debate architectural logic.

There is a rather sizeable, multi-tunneled lab and living quarters underneath the “topside” to the Durant Pharmaceuticals deep ocean “facility.” I apologize for overuse of snarky “quote” marks…

Carl Durant (veteran film and television actor Michael Beach) arrives on the scene to demonstrate that his captive bull sharks respond to electromagnetic stimulation and can therefore be somewhat controlled. Durant proves this to his unsuspecting guests by tossing one of his assistants into the shark filled water. And you thought your boss was a jerk. This scene serves as little more than an excuse for Dr. Calhoun to peel down to her skivvies and show us her amazing body. Unfortunately, I believe that Deep Blue Sea 2 was envisioned as a SyFy Channel property, so we are not treated to The Full Calhoun. OK, I know how this makes me sound in today’s climate, and I am not being intentionally crass. Check out the IMDB.com page for Danielle Savre and you will see that she is an accomplished actress with 40 credits to her name in a career that extends back more than 15 years. The fact remains, however, that the character of Dr. Calhoun was clearly written to be easy on the eyes, and Savre more than meets the requirement. 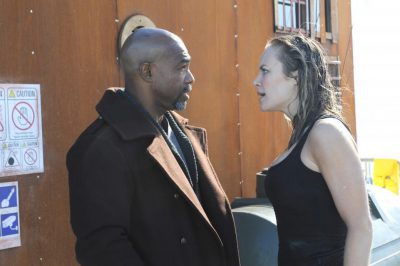 It turns out that Durant is giving his bull sharks performance enhancing drugs! He wants to make the sharks smarter, which is the very definition of a terrible idea. Durant’s agenda is actually somewhat beneficent, if ludicrously misguided: the sharks are his test subjects. Eventually Durant plans to use his drugs on human beings in an attempt to make us all smarter before artificial intelligence rules the world. He sees himself as the potential savior of mankind in the inevitable war of Humans vs. Robots. In other words, Durant believes that the events of The Terminator will someday come to fruition and he wants to be ready. And you know what, I agree with him. I’ve always felt that I would someday be killed by a Terminator. But couldn’t Durant have tested his genetic engineering experiments on something less dangerous than man-eating sharks, like maybe ducks or chipmunks? Something much easier to handle in case things go apeshit? I guess not. 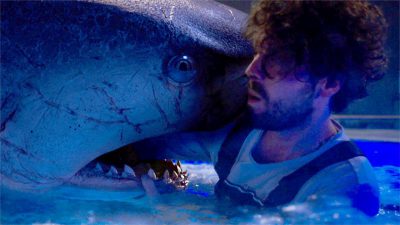 The electrical malfunction that this movie has been begging for finally occurs (at minute 42 out of a total of 93, be forewarned) and things start to go haywire. But will they go haywire enough for my satisfaction? One of the sharks gives birth to a sharkload (sorry, couldn’t resist) of tiny baby CGI sharks. They’re cute little buggers, and they remind me of when Simpsons bartender Moe Syzlak thought that he had found a “sugar shark.” 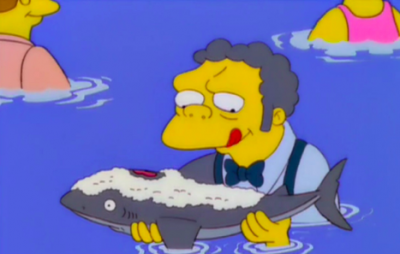 Good old Moe. The cute little “sugar shark” here is about the same size as the animated baby sharks in Deep Blue Sea 2, and also about as frightening

Do viewers notice that a movie looks good when the writing and acting are, shall we say, less than stellar? They probably do not, and this is understandable if somewhat unfortunate. I know that various color tints and other facets of movie magic can be added in post-production, but I will give the filmmakers props for the overall look of Deep Blue Sea 2. However, despite gemstones like “These sharks can suck my ass!” it is painstakingly obvious that the screenplay was not penned by one of the veterans of The National Lampoon. Can I recommend Deep Blue Sea 2 in good faith? Ehhhhh… I can see it being amusing if you are already half-drunk when it starts, but that is irresponsible behavior that should only be engaged in by seasoned professionals like The Tuesday Night Cigar Club. Everyone else would probably best be served by making some buttery popcorn and watching the original. As always, my friends, The Doctor wishes you all a clean bill of health.