Yes, I know that means that we are deprived of boobies and visceral bloodletting but some movies do not need them. Wow, I almost can’t believe I just said that... 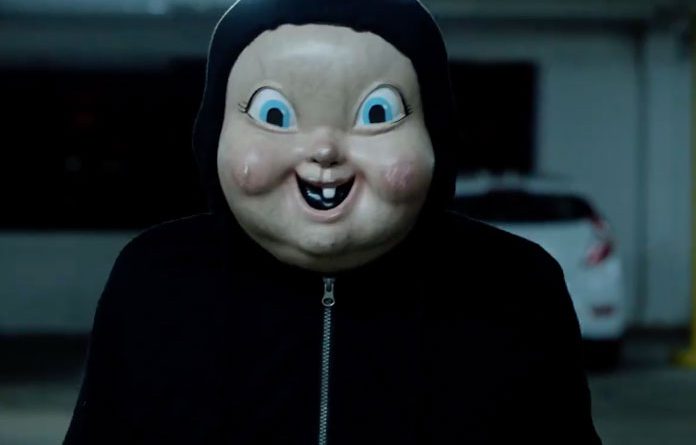 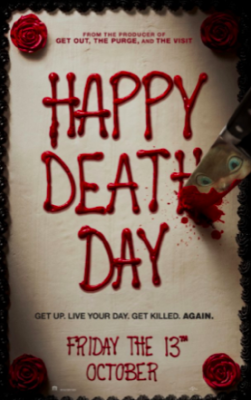 One of The Doctor’s most cherished birthday events transpired at a Chuck E Cheese eatery when I turned eight. My hands were greasy from eating pepperoni pizza and my pockets were filled with grimy, syphilitic video game tokens. Due to my young age I was only half-drunk, so I remember distinctly that I thought it would be funny if I grabbed the tail of Mr. Munch and gave it a hard yank, whereupon I was chased around the restaurant and the arcade until finding refuge between Dig-Dug and Tron. What a blast! Ah, the mirthfulness of youth… Had I known that Mr. Munch was probably a societal dropout, already enraged at whatever set of misfortunes had led to him wearing a heatstroke-inducing fur costume and earning minimum wage while dealing with rambunctious troublemaking little bastards like myself, well I probably would have done the same thing anyway because, you know, it was my eighth birthday and such things would have been beyond my capacity to understand. Let’s chalk it up to one of my earlier stabs at scientific experimentation. 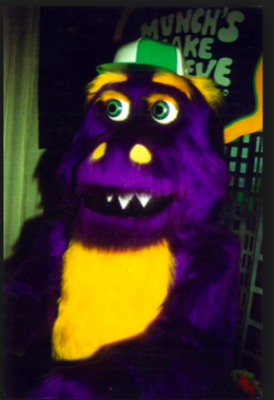 He may still be looking for me…

Birthdays are, of course, supposed to be fun… unless you have to live the same day over and over again, in which case I can imagine that it might become a trifle boring. That is what is called a hackneyed segue and in this particular case it serves to bridge the gap from my personal treasure trove of memories into a movie review for Happy Death Day, the recent horror release from Blumhouse Productions. It’s the Groundhog Day premise in a slasher film, and that is all that The Doctor requires in order to be taken in by the proverbial hook, line, and sinker. I love the idea of combining the two elements and am frankly surprised that no enterprising persons had attempted this earlier. Then again, maybe they did and I just don’t know about it. Quit looking at me like that, I’m a member in good standing of The Tuesday Night Cigar Club!

Teresa, nicknamed Tree (the wonderful Jessica Rothe – more on her later), wakes up hungover in a dorm room on the morning of her birthday. As everyone knows from the trailer, Tree is going to be murdered that evening by a killer wearing a disturbing baby-face mask, upon which she immediately wakes up in the same dorm room to live through the same birthday once more… only to be murdered by the same masked killer again. And again. And again. And on and on and so forth. On Day One we learn several things about Tree, namely that she is something of an unlikeable young lady. We eventually come to know that her prickliness is largely due to the tragic loss of her mother some years earlier, but this fact isn’t established until later on in the film’s narrative. She is possessed of a spunky personality and a sharp sense of humor, but she has more than a few bitchy and perhaps even amoral qualities. Tree is completely dismissive of the kindly Carter (Israel Broussard) who has protectively allowed her to sleep off the previous night’s debauchery in his room, although she warms up to him following each of her many deaths. She is also – at the outset at least – somewhat rude to most of the people in her life, including her sorority sisters and even her own father. Tree is not the stereotypical idea of a vapid sorority girl lost in her own beauty and narcissism – that part is played deliciously by Rachel Matthews as Danielle, Tree’s rival in her Greek Life band of sisters. She is, however, something of a jaded party-girl pretending at world weariness, although repeatedly being murdered at the end of the day slowly beats that façade down. 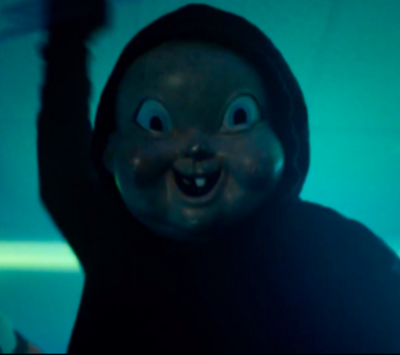 You’ve got to have a good mask in a slasher movie, and the “Bayfield Baby” worked for me!

From the outset, Happy Death Day does a good job of creating a mystery element. We are introduced to several supporting players, any one of which just might be concealing a hidden instability with a potential for homicide. Could it be an overly aggressive fratboy that Tree unceremoniously snubbed and insulted? Perhaps a fellow sorority sister that she treated with a rude disdain that bordered on outright meanness? Or in a perhaps too-obvious case, is it the wife of the young college professor Tree has been canoodling around with in private? That’s right, I said canoodling, and you should never canoodle with another woman’s man. Although, Canoodles and Cheese is still one of my favorite dishes. Maybe it is none of these, Doc never spoils the fun. Who knows what clues might be uncovered or which suspects will be ruled out but it is up to Tree, with whatever help she can get from the aforementioned Carter, to try and solve her murder while she still can. Or before she goes batshit crazy.

And therein lies the key to the success of Happy Death Day. Sure, it’s a taut thriller with a nice new entry into the slasher ouvre, and I do love horror movies that take place on a college campus. But the real hero – excuse me, heroine – is the young Jessica Rothe, who delivers a tour de force performance as Tree. The movie literally hinges on her performance and the audience’s ability to sympathize and root for her and, considering that the character of Tree isn’t initially sympathetic, this was no easy feat. Like a warped version of Ross and Kessler’s 5 Stages of Grief, Tree progresses from fear and confusion to a state of acceptance, albeit one that is laced with frustration and anger. Her pain, her aloneness, her ocassional gallows humor at the absuridity of it all, is made believable by Rothe. Tree may be reliving a version of the same horrifying day over and over but she is going on a personal journey to free herself in the process. Happy Death Day would have failed in the hands of a lesser actress, thankfully Rothe is not a lesser actress. In fact, in my professional opinion, Rothe is a revelation in Happy Death Day and I will look forward to whatever she does next.

Happy Death Day gets two thumbs up from The Doctor. I recommend checking it out at your earliest and most convenient opportunity. This goes double for all of my fellow horror film-o-philes out there. Do not be dismayed by the PG-13 rating. Yes, I know that means that we are deprived of boobies and visceral bloodletting but some movies do not need them. Wow, I almost can’t believe I just said that. Perhaps, like Tree, I am personally evolving? Almost certainly not. Happy Death Day doesn’t rely on jump-scares but rather a real sense of danger and suspense that good slasher movies always know how to produce. Add in the energetic and triumphant performance of Rothe and you have got a winning motion picture. As always, The Doctor wishes you all a clean bill of health.