If Bee is a realistic facsimile of an actual babysitter, then The Doctor’s parents really fucked me over. Oh well...

Unfortunately as a youth, The Doctor did not have any wild misadventures involving a babysitter to speak of. In fact, I can’t remember my parents ever employing a babysitter. At a very young age I had transformed the basement of my childhood home into a dungeon/laboratory where I spent long stretches of time conducting various experiments of different ethical levels. In retrospect, that place basically served as my babysitter. There was even a tiny refrigerator with popsicles in it, which in my teen years I learned to inject with gin or peach brandy. Memories… 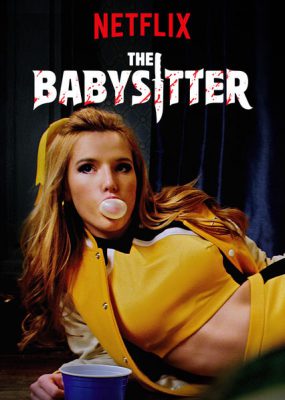 I was pontificating on these matters when I sat down to watch The Babysitter, the McG horror/comedy that was recently released on Netflix. TNCC chairman Matthew Cade reminded me that The Babysitter had been released, and I was certainly intrigued by the premise, so I injected a syringe of Tanqueray into a lime-flavored popsicle and settled in for my viewing.

Do middle school-aged children require a babysitter? Perhaps in some extreme cases they might, although it is not a situation that I can relate to on a personal level. Cole (Judah Stevens) is a twelve-year old, self-described pussy who plays with model cars and apparently still needs a babysitter to watch over him when his parents (the always enjoyable Ken Marino and Leslie Bibb) go out of town. Cole’s regular babysitter is Bee (Australian actress Samara Weaving) who is an almost supernaturally hot knockout with blonde hair and piercing eyes. In terms of sheer beauty, she rivals Margot Robbie or Naomi Watts, and in the strictest scientific language, that aint no joke. Aren’t babysitters usually adolescents themselves and not blonde haired, blue-eyed, twenty-year old sex kittens? It’s ironic that I hate asking questions but I love trying to answer them. 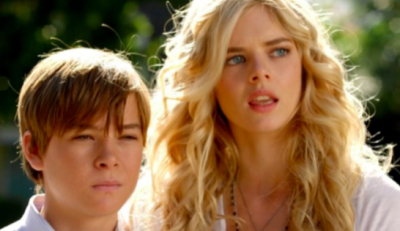 Cole (Judah Stevens) and Bee (Samara Weaving). Mother of God, she cannot be a typical babysitter!

Bee is perfect and I think even a naïve middle school boy would have to realize that she is literally too good to be true. She is a teen boy’s absolute fantasy, and she treats Cole as if she genuinely loves hanging out with him and wouldn’t rather be anyplace else. They swim (bikini alert!), they dance, they re-enact scenes from Billy Jack, and they flirt like crazy. If Bee is a realistic facsimile of an actual babysitter, then The Doctor’s parents really fucked me over. Oh well. Time to have another popsicle. 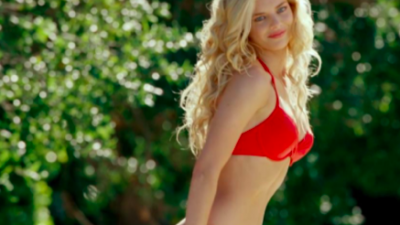 Now that I have given the matter additional thought, I have arrived at the conclusion that Cole was a genius.

The performances of Stevens and Weaving are more than up to par, and their relationship is very believable. Their charm and charisma, both as individuals and as an unlikely pair, are the best part of The Babysitter. Bee enjoys hanging out with young Cole; he isn’t threatening like most guys her own age probably are and she can relax and unwind. Cole, of course, is head over heels in love with Bee and wants nothing more than to have her in his life for as long as possible. He might be a pussy but Cole is nobody’s fool.

At the behest of his cute neighbor and wannabe girlfriend Melanie, Cole decides to spy on Bee after pretending to go to bed for the night. They anticipate that a prototypical boyfriend will arrive, perhaps a rock-and-roller with long hair and leather pants, or maybe an archetype of the douchebag jock in his letter jacket. Instead, a diverse group of Bee’s pals show up for what appears to be an old-fashioned game of Spin The Bottle. Of course, it is anything but! Bee has recruited her friends to perform a satanic ritual involving murder in order to summon the devil. Not to go off on a tangent, but is that ever a good idea? Seriously, has an attempt to make contact with Satan ever panned out in a positive way? Isn’t shit bad enough without an incarnation of Beelzebub running amok? Teenagers, I swear… 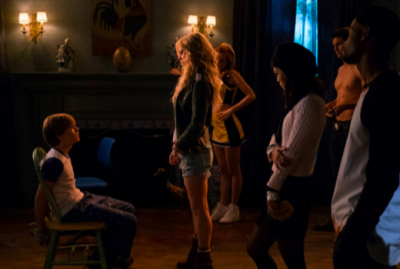 The arrival of Bee’s recruits puts Cole in hot water. Unfortunately, “The Babysitter” begins to lose some of its luster for The Doctor around now.

Having witnessed a homicide that left his living room soaked in blood and viscera, Cole has to get over his initial shock and figure out a way to get out of his house and run for hell or high water. Does he call the cops? Or try to escape from his second story bedroom window? How long before the would-be devil worshippers realize that Cole is onto them and their nefarious deeds? There are a lot of disparate elements here that could have made for an interesting thriller, but I thought that the execution left a little to be desired.

Granted, The Babysitter was never a boring movie, and that by itself warrants mentioning, but I think it would have been better off if everything had been played more or less straight. The gore is comical and Bee’s minions are basically just there so that they can have gruesome, blood-spattered deaths. I know that Bella Thorne and Robbie Amell are talented performers, but these roles don’t quite seem worthy of them. And why does Amell’s character go from trying to kill Cole in one scene to encouraging him to stand up to the neighborhood bully in the next? Maybe I’d had too many popsicles by that point, but that was a bit of a head scratcher. Balancing horror and comedy is a deft act to perform, and I felt like The Babysitter could have been another Scout’s Guide to the Zombie Apocalypse, but in my humble opinion it came close to hitting the mark only to narrowly miss. If it sounds like The Doctor is being somewhat wishy-washy with this review, that is because I am. The Babysitter isn’t a bad movie by any means, and the setup is great, but the attempts at getting black-comedy laughter are an integral part of a film of this nature and most of them didn’t work for me. This could have been a homerun but it ended up being a hard-hit single with the runner getting caught trying to steal second. At eighty-five minutes The Babysitter isn’t going to rob you of time, so factor that into your decision-making processes when it comes time to pick a movie. Just make sure you have a few popsicles in the icebox. Speaking of which, I should have another. As always, The Doctor wishes you all a clean bill of health.