Raunchy is a gimmick; it can frame an entire movie’s sensibilities, but if the audience doesn’t connect on an empathic level with the performers, then the move will likely be lost to history. Unfortunately, that is my opinion of Hot Bot... 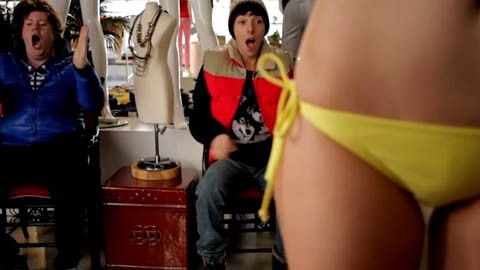 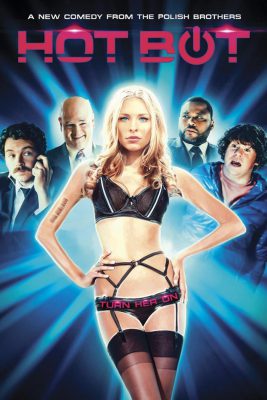 I was relaxing in my laboratory late of one scorching afternoon and thinking about watching The Shape of Water – really, I was thinking about it – when TNCC chairman Matthew Cade informed me that a recent title was available on Netflix that The Doctor might be interested in reviewing. The film in question was Hot Bot, a movie about two geeky teenagers who suddenly come into possession of a highly realistic sex robot and must decide what to do with her while evading the clutches of the evil senator for whom she was originally intended. Imagine such guile! Such outrageousness! I almost dropped my Gin Rickey at the proposition. Do you know what I told Mr. Cade? Well, The Doctor looked him squarely in the eye, and I said to him “Dammit Cade, you beautiful genius, why didn’t you tell me about this sooner? And when do you want the Hot Bot review on your desk?” I was never going to watch The Shape of Water.

A network news feed informs the viewer that a German corporation (of course it would be those hardcore porn-loving Krauts) has created the hypoallergenic Hot Bot for use throughout Europe. The Hot Bots are so lifelike as to be indistinguishable from the real thing, or as the German doctor being interviewed tells us “Space age polymers make the boobies so tactile.” Now that, my friends, is science. Pending legislation will decide if the Bots will be made available for sale in the U.S. Did I recently read about a tariff on synthetic vaginas? No, wait, that was aluminum. My fault. I tend to lose myself in my experiments and pay little attention to civic developments. Anyway, the aptly named Senator Biter (Larry Miller) agrees to help sweep the legislation through Congress, so long as he is sent his own personal Hot Bot first. Of course, the federal agents (Anthony Anderson and Danny Masterson) assigned to escort the blonde “Bardot” decide to have a peek in the box, at which point Bardot overpowers them and escapes on foot. At least, that is what we are told, as the scene itself apparently failed to survive the cutting room. Oh well, these things tend to happen.

Enter our two teenage loser protagonists, the skinny Limus (Doug Haley) and his chunky, curly haired friend Leonard (Zack Pearlman.) On their way home from their shitty jobs at a disgusting fried fish stand called Batter Town, they accidentally clip Bardot when she dashes in front of their car. Thinking that she is a real person, they take her home rather than to the nearest emergency room. Mind you, they weren’t drunk or high or taking a stolen car for a joyride, so they could have easily called 911 and been done with the incident. As always, however, in the world of celluloid we had better not question the decision making of the characters, else we would have no movie to speak of. Then again, maybe that wouldn’t be such a bad thing. Bardot (the incredibly lovely Cynthia Kirchner) has been rendered temporarily unconscious which makes no sense at all given that she is a robot. The fact that she can fight like a Navy SEAL is equally senseless, but I suppose that is just a matter of programming. Do not fret, I have not forgotten that the name of this movie is Hot Bot and I am getting what I ordered. If you ever run afoul of a Batter Town, do not order anything. 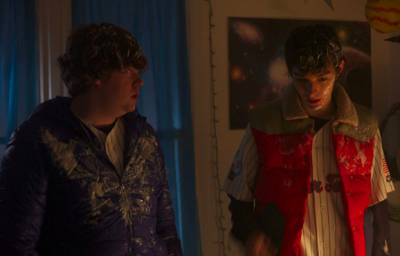 A touching moment where Nard (Zach Pearlman) and Huffy (Doug Haley) are somehow covered in a viscous, semen-like goo after their car’s air bags deploy…

When Bardot finally wakes up the next morning, she asks the guys which one of them wants to fuck her first. Her Terminator-style viewscreen (a gag that worked for me) informs us that the “trial period” is over, at which point she shuts down again and Limus and Leonard realize that they aren’t dealing with a real human being. No problem there. They just take her to the local sex toy shop where they are on a first-name basis with the proprietor Benny (David Shackelford.) Interrupted from trying to sell nunchaka dildos to a pair of suburban moms, Benny reluctantly studies the Bot, locates the online user manual, and slides a credit card between her lips for purposes of reactivation. Voila! If The Doctor ever needs (and can afford) an assistant, I might look up Benny.

It took me over thirty minutes of viewing Hot Bot before I recognized the obvious debt owed to the great Weird Science, but since that film was so many light years ago (and light years better) I decided to forgive myself and the debt. The two lead goobers in Hot Bot couldn’t touch Anthony Michael Hall’s charisma, no matter how hard they try. The skinny neurotic kid and his chubby sidekick is a formula that seemed to work in Superbad, but that movie was released in 2007 and the partnership seems played out. Leonard, with his white-boy afro and what-me-worry approach to life, is supposed to be delivering the one liners that lead to belly laughter but for The Doctor he just wasn’t all that likeable. If you are going to make a teen sex comedy with lovable geeks then it is imperative that we love the geeks, or at least like them. Sorry, fellas. Better luck next time. Props are due Kirchner for her performance as Bardot. Playing a robot authentically is far more different than being an actor or actress who is accused of a robotic performance, and she makes it work. Also, the poor young lady gets felt up repeatedly in Hot Bot by several different dudes. It would be only fair if Kirchner had been allowed to kick somebody in the nuts in between takes, but I’ll wager that didn’t happen. 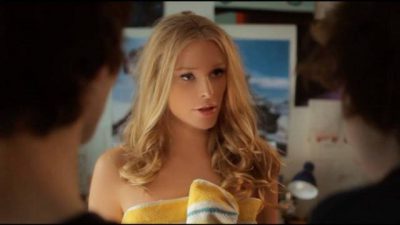 The beautiful Cynthia Kirchner delivered as the sex bot Bardot. She deserves better than this.

Hot Bot tries to cross boundaries and be outrageous while also covering all the familiar tropes of teen movies, but it just felt stilted and not very funny. Efforts at poignancy failed, and when the movie tries to be serious it just ends up being creepy. All of this would have been forgivable if the laughs had been in full supply. Hell, I don’t know, maybe it’s me. It’s not that I am from another era, although I am. I’ve always supported “blue” endeavors in filmmaking and usually life in general. One of the meanest bullies at The Doctor’s middle school once recoiled in horror at something that I said and then called ME a Potty Mouth. Raunchy subject matter has long since been rendered immaterial, however; There’s Something About Mary featured jizz in the hair and that movie came out 20 years ago. I don’t think you can shock people anymore with dildo humor, as much it pains me to admit. American Pie did not make a gazillion dollars and spawn a franchise because Jason Biggs fucked a pie. That is funny, to be sure, but it was Biggs engaging performance as Jim, as well as the likeable performances of the other actors and actresses, that made American Pie something much more than a teen sex flick. Raunchy is a gimmick; it can frame an entire movie’s sensibilities, but if the audience doesn’t connect on an empathic level with the performers, then the move will likely be lost to history. Unfortunately, that is my opinion of Hot Bot.

Perhaps I just have to face the fact that I don’t even know what is funny anymore, other than the urbane wit of The Tuesday Night Cigar Club… yet I still laugh when I watch The Simpsons and It’s Always Sunny In Philadelphia. I hate to do it, but I cannot in good faith recommend watching Hot Bot. Therefore, as an alternative, I will offer up three movies where the themes of Hot Bot are successfully carried out. If you haven’t seen them, watch them. If you have seen them, your science homework is to revisit one of them when you need a good jaunt. As always, The Doctor wishes you all a clean bill of health. 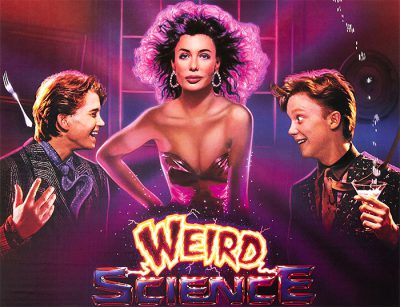 The legendary Anthony Michael Hall in his 1980’s salad days and the lesser known Ilan Mitchell-Smith are a pair of unpopular high school geeks who use their (early) computing technology to create their own woman, played by the sexy Kelley LeBrock. The boys parade her around town and a series of misadventures ensue. It’s a John Hughes classic, with the eminently likeable Hall carrying the show and featuring supporting performances by a young Robert Downey Jr. and the late, great Bill Paxton (an actor so revered that the TNCC paid tribute to him with The Boot of Remembrance following his untimely passing). There exists a wealth of 80’s teen movies to choose from; I don’t know where Weird Science ranks on that crowded spectrum but it’s a dynamite good time, then and now. Shit, I might watch it tonight! 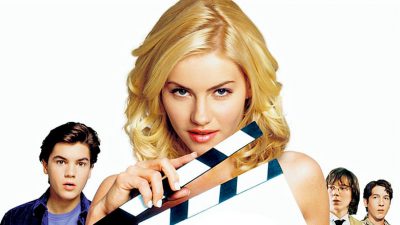 One of those movies where they tried to do too much and is therefore slightly overlong and flawed because of the effort, but an entertaining film nonetheless (you could say the same about Superbad, but The Doc will take The Girl Next Door over Superbad any day of the week). Emile Hirsch is the milquetoast prep approaching graduation, preparing notecards for his valedictorian speech and ready to move on to life beyond high school. His world gets knocked off its axis when the stunningly lovely Elisha Cuthbert moves, quite literally, next door to his family. She is running away from her recent past as an adult film actress, although Hirsch doesn’t know this and quickly falls for her. Who can blame him? We are thusly treated to another series of teenage misadventures. The Girl Next Door is helped immensely by a pair of stellar supporting performances: a pre-Justified Timothy Olyphant as a porn producer and all-around badass named Kelly and the always fantastic James Remar as adult film impresario Hugo Posh. Hirsch and Cuthbert are the leads and they successfully carry the picture, but Olyphant and Remar steal every scene they are in and elevate the proceedings. More Cowbell? Nay, More Remar!

The Scout’s Guide to the Zombie Apocalypse (2015) 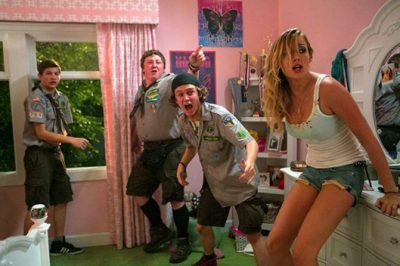 The TNCC rocked a podcast on this gemstone, so check that out for the granular details. This film is what it says it is in the title, but also so much more. Three teenage boy scouts, admittedly dorky because of their uniforms as opposed to any character traits, put their extraordinary useful scouting skills to work when a zombie outbreak threatens their suburban home town. Now this is twenty-first century raunchiness but performed by a likeable trio of leads. When you can entertain horror film aficionados like Cade and Doc with the tired Zombie genre, you have made a good film. Tye Sheridan, Logan Miller, and Joey Morgan are all winners as the scouts, but you’ll also enjoy David Koechner (Champ from Anchorman) and Arnold Schwarzenegger’s son Patrick as the preppy jock asshole. Funny and dirty and energetically performed, Scout’s Guide is a Friday Night romp.