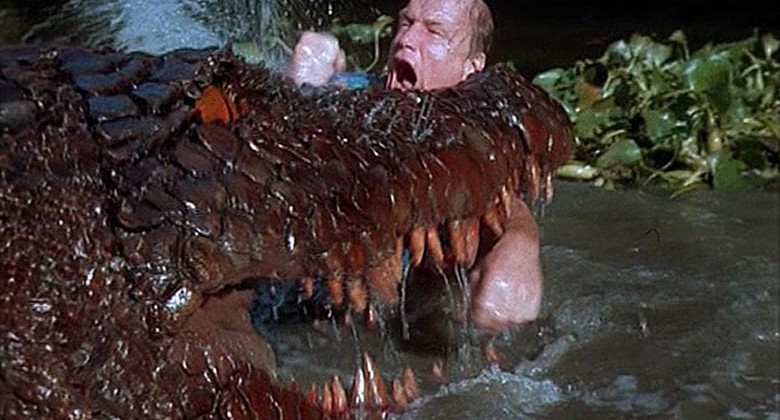 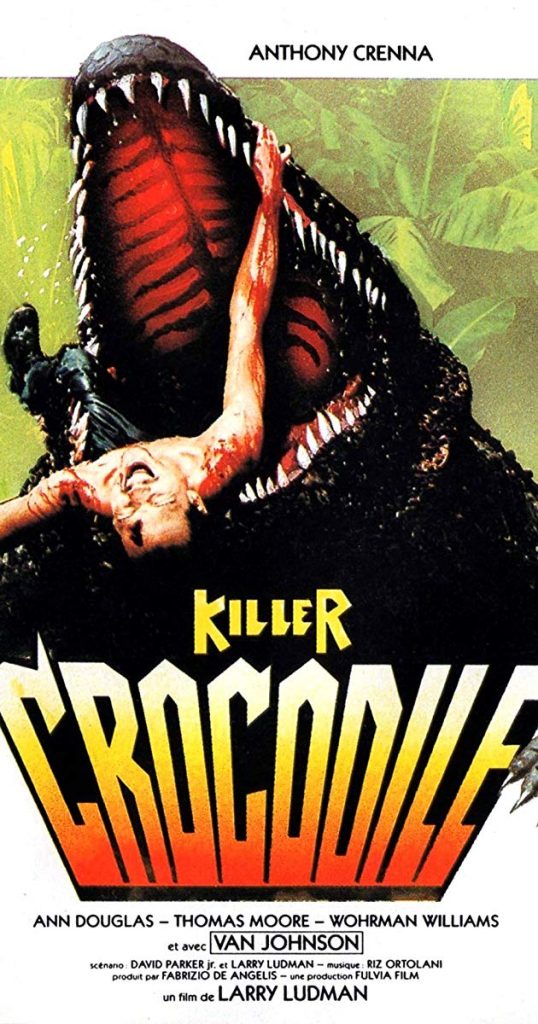 When it comes to unearthing hidden gemstones of celluloid, TNCC chairman Matthew Cade has no equal. While recently performing his personal, meticulous brand of research to find a movie worthy of podcast discussion, Cade happened upon some examples of a film genre with the unflatteringly label of “Italo-Sleaze”. If you think that is the label for a brand of adult films produced in the Mediterranean region, you would be in the wrong! Rather, Italo-Sleaze is the moniker bestowed upon a group of B-movies – produced and filmed in Italy, of course – released in the 1970’s and 1980’s that are copycats of more successful Hollywood productions. The Doctor had previously reviewed a prime example of the genre in my James Franciscus double-feature review, The Last Shark, a blatant copycat of the Jaws formula that was joyously entertaining in its own right. But why stop there? Those fun-loving Italians sure didn’t. Before settling on the glorious RoboWar for a recent TNCC podcast, Cade discovered that the same people responsible had also made another creature feature in the Jaws vein, Killer Crocodile. When he informed me of this and instructed me to view the trailer which featured a ludicrously giant handmade crocodile, is it any wonder what transpired next?

Maybe The Doctor has seen too many motion pictures of dubious quality – there really isn’t any maybe about it – but I have no intention of ever visiting a tropical island community. How often do things end up going batshit in those locales? Sharks, reptiles, piranhas… all of them bloodthirsty and run amok due to the ingestion of toxic chemicals or the encroachment of mankind… 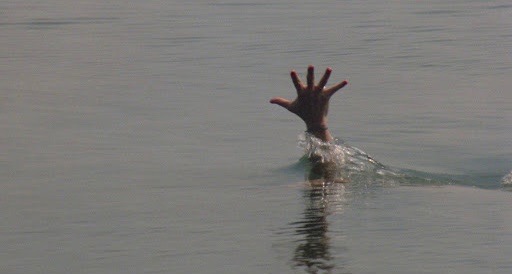 My God, man, don’t people know not to go to these places?

The young lady in the opening scene mimes the backstroke of Susan Backlinie from the opening scene in Jaws and then proceeds to mime her death, sans buoy, since our tropical locale appears to be a backwater lake or river basin of some kind. There is even a pseudo John Williams score and point-of-view creature shots just in case you weren’t aware of what the producers were up to. Imitation is the sincerest form of flattery, so I’m on board with all of it.

A group of young environmentalists – a tagging that usually equates to body count fodder in horror movie lingo – are on the lake investigating the dumping of toxic waste. Such people mean well but usually end up royally fucked, however not before they provide us with inside information such as “This swamp’s no amusement park”. Killer Crocodile features a lot of Italian performers whose voices were later dubbed in English, but it also stars American actors Richard Anthony Crenna (son of THE Richard Crenna!), Sherrie Rose, and even Van Johnson! For those who don’t know, which is probably everyone, Van Johnson was a famous actor from the forties and fifties who starred in such Golden Age classics as Battleground, Thirty Seconds Over Tokyo, and The Caine Mutiny alongside the legendary Humphrey Bogart. I guess by the late eighties Johnson was in dire need of a paycheck, but he ably fills the role of the corrupt local politician whose presence in a creature feature is something of a necessity. 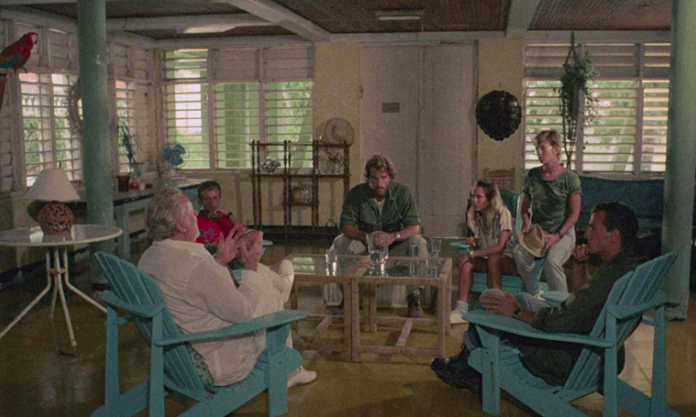 Van Johnson tells the hipster environmentalists in “Killer Crocodile” that he once worked with Humphrey Bogart and that they can all kiss his ass if they don’t believe him.

Speaking of which, of course there will be the inclusion of a grizzled, sweaty hunter (Ennio Girolami) in the Quint mode that movies of this ilk have been aping forever, and if you think he is not eventually going to ditch his belted safari jack for a sleeveless vest and ammo bandolier then you haven’t been paying attention. 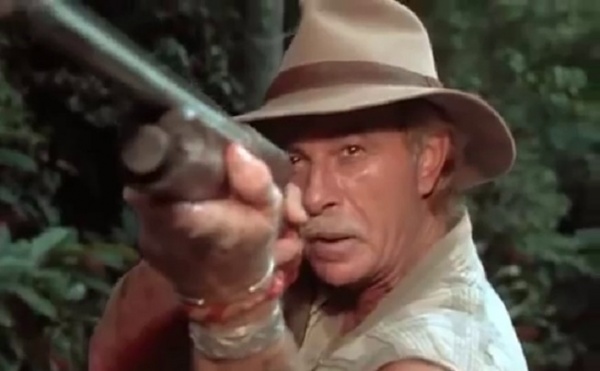 Ennio Girolami as Joe in “Killer Crocodile”. These movies aren’t complete without a nod to Quint…

Killer Crocodile does possess an overall pleasing aesthetic quality considering its likely budgetary restrictions, featuring professional cinematography and a decent location, although it sometimes appears more like a cramped tributary of a South American river. The movie wisely limits our view of the giant crocodile – again, it worked for Jaws – and when we do see it the results are both comical and well worth the rental price at the same time. The Killer Crocodile has yellow eyes that are bigger than tennis balls and a mouth that could easily swallow a racehorse. I’ll take a giant handmade crocodile over CGI every day of the week, even if sometimes it resembles a giant floating rubber raft. 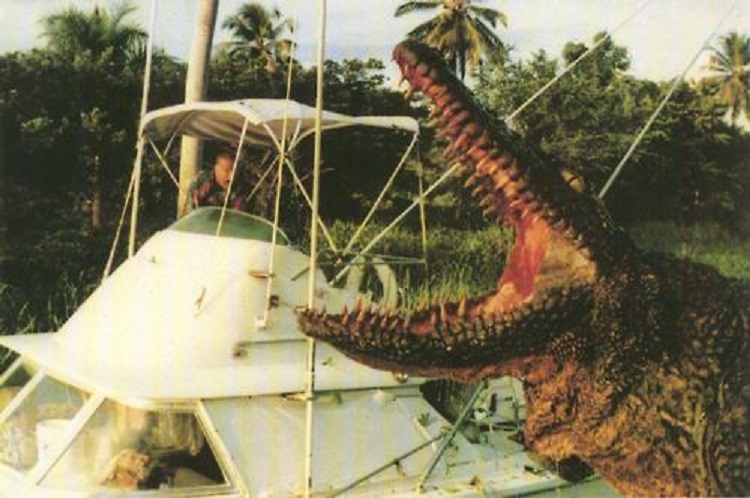 Those cannot possibly be lifelike proportions!

The only real question the film representation begs is: Do crocodiles roar like grizzly bears? Because this one does. I thought they just snarled lightly, but then again herpetology is not my field of study. I have only come into close proximity with crocodiles once, and that was at the Dallas Zoo.

The pacing of Killer Crocodile is slow in stretches, but the last twenty or so minutes have enough absurd visual craziness to make up for any dragging that occurs earlier. The dubbed dialogue, the actual dialogue, the crocodile itself… this is schlock, but it’s schlock at its finest. You know what you are getting into, and if you catch my drift then you should rent Killer Crocodile on a Friday night. Add tall cans of potent ale at your own discretion. Would it surprise anyone that Killer Crocodile garnered a sequel, and that The Doctor planned a viewing and subsequent review? It shouldn’t, because where there is a Killer Crocodile 2 there will certainly be The Doctor… 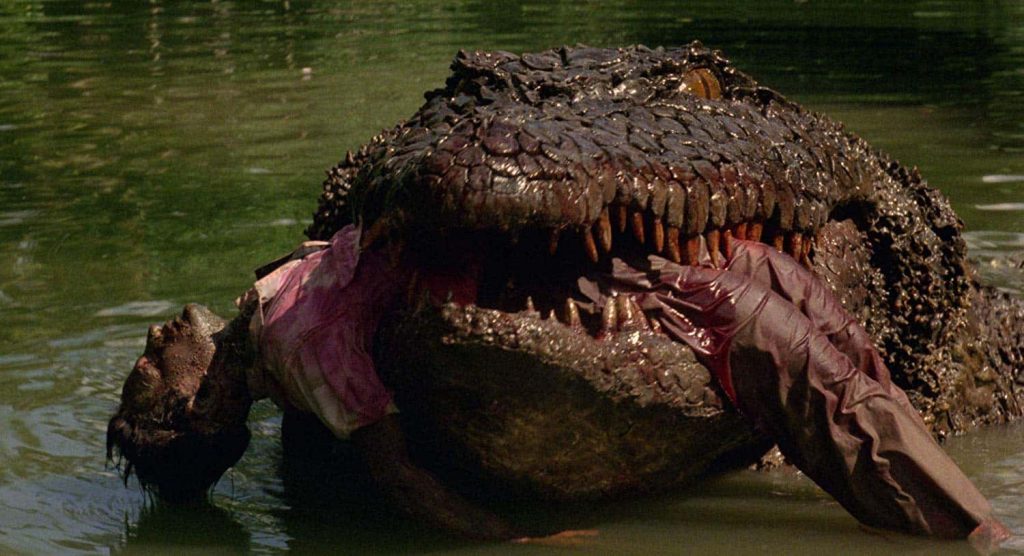