Go Big Or Go Home is a philosophy that is adhered to in Satanic Panic. This film is not for children or those otherwise inclined to be of the squeamish variety... 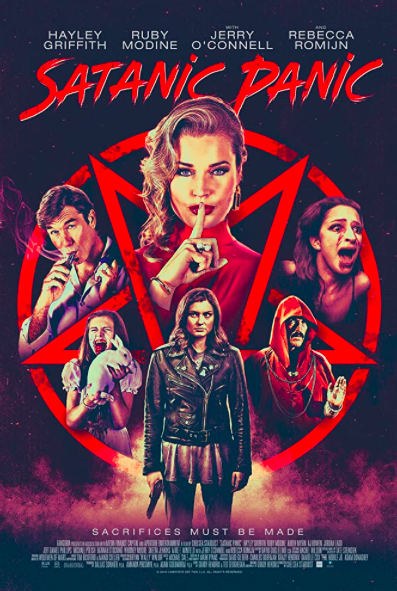 Tuesday Night Cigar Club chairman Cade notified me recently that the Shudder streaming channel was kindly doing their part in this time of global crisis by providing a free 30-day trial service for anyone who signed up. After the trial period ends, the service can be retained for a mere $4.99 per month. I am not shilling for Shudder – although The Doctor is available to be an official spokesman for a nominal remuneration – but I will be damned if that doesn’t sound like a bargain. Shudder offers a wealth of horror movies and TV shows, past and present, to choose from and you can always cancel it when the trial period runs out. There are, of course, many ways in which following my advice could potentially lead a person to fiscal ruination, but I hardly think that this is one of them. Still, caveat emptor. Shit, I can’t make every decision for you! I am sorry for that outburst. I have been confined to solitude for far too long.

We are shortly introduced to our cute and busty heroine Sam (Hayley Griffith) during her first day on the job as a delivery driver for Home Run Pizza, a profession that she chose even though her means of transportation is a moped. I have never worked in the food service industry in any capacity and Thank God for that, because it seems that pizza delivery is the sort of job where one probably runs afoul of all manner of idiocy and rudeness. Sam tries to remain unperturbed; she is, after all, the spunky type who wears a leather jacket and red Converse All-Stars… and rides a moped. Despite this description, Griffith plays the role with an openness and sincerity that keeps the character of Sam from coming off as a hipster caricature. 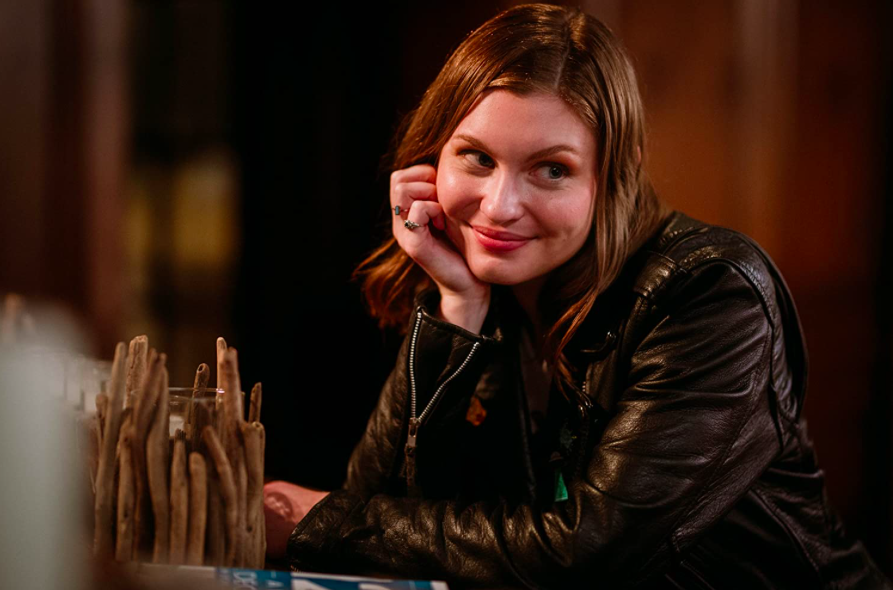 Hayley Griffith delivers with her performance as Sam in “Satanic Panic”

At the end of her shift, Sam delivers several pies to a large, gated estate in the upper crust neighborhood of Mill Basin. After receiving no tip whatsoever from the discourteous asshole who answers the door, Sam is then horrified to promptly discover that her moped will not start. The “vehicle suddenly not operating” tactic is a horror movie staple, but it serves as a worthy setup for putting Sam on the grounds of the sprawling estate after dark where nefarious activities are almost certainly afoot.

The lovely Rebecca Romijn, in an understated and somewhat unsettling performance, is the wealthy neighborhood hostess for a group of seemingly non-threatening, mostly middle-aged residents of Mill Basin. Unfortunately for Sam, these people are all would-be Satan worshippers in need of a virgin for their sacrificial demon-raising ceremony. The comely Sam is not a virgin, is she? I’m afraid that it is just far too darned early to tell… 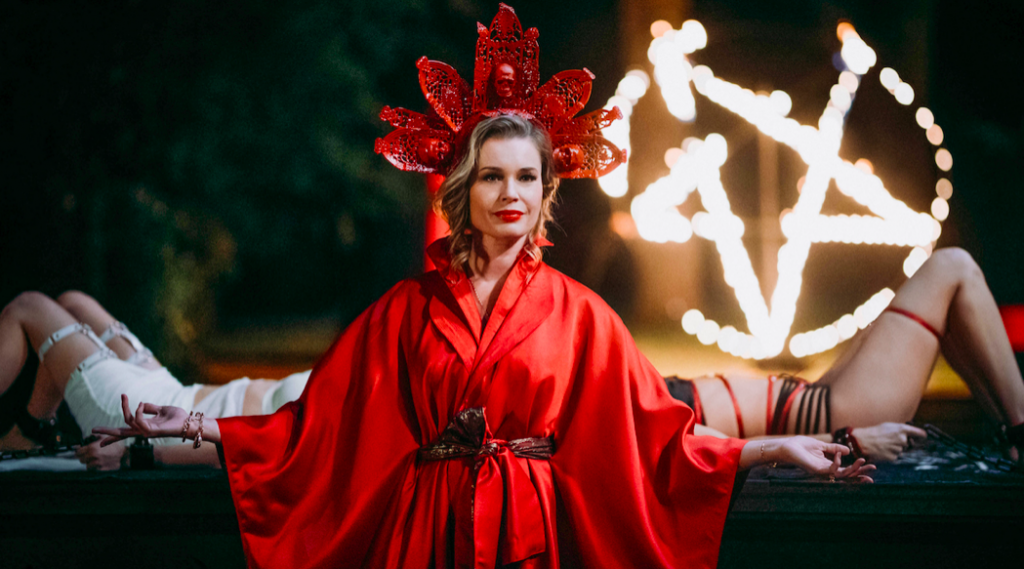 What follows is a blood-soaked farce that is the very definition of black comedy. The proceedings are both nutty and outrageous – to say nothing of the supernatural gore – but Satanic Panic manages to successfully strike a chord between that which is ludicrous and scenes that truly inspire terror. There is even something of a thrilling cat-and-mouse aspect as Sam attempts to evade her murderous pursuers. Straddling that fence is a difficult act, and everyone involved deserves credit for making what turned out to be a fun and entertaining picture. One can imagine that it would have been easy for a performer to not take it seriously in a movie that is purposely silly, perhaps engaging in a metaphorical “breaking of the fourth wall” without actually winking at the camera. Thankfully, that is not the case with Satanic Panic. 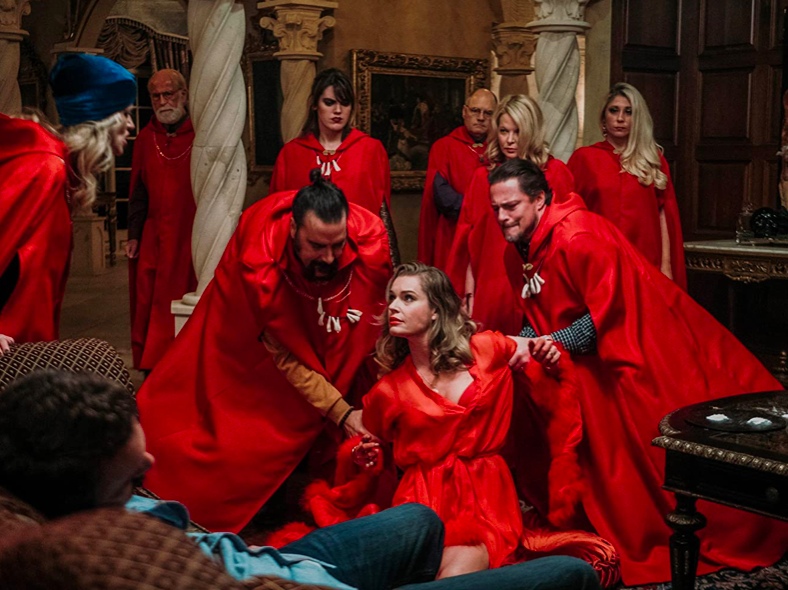 Always with the red robes these satanists!

Everyone seems to give exactly what their respective parts called for. Romijn is especially noteworthy as evil personified, and both her and Griffith deserve recognition, but so does the supporting cast of Arden Myrin, Jordan Ladd, Ruby Modine, Jerry O’Connell, and A.J. Bowen. Sure, there are the requisite staccato bursts of dialogue that sometimes feel unnaturally forced, but for the most part Satanic Panic retains an enthusiastic energy throughout. 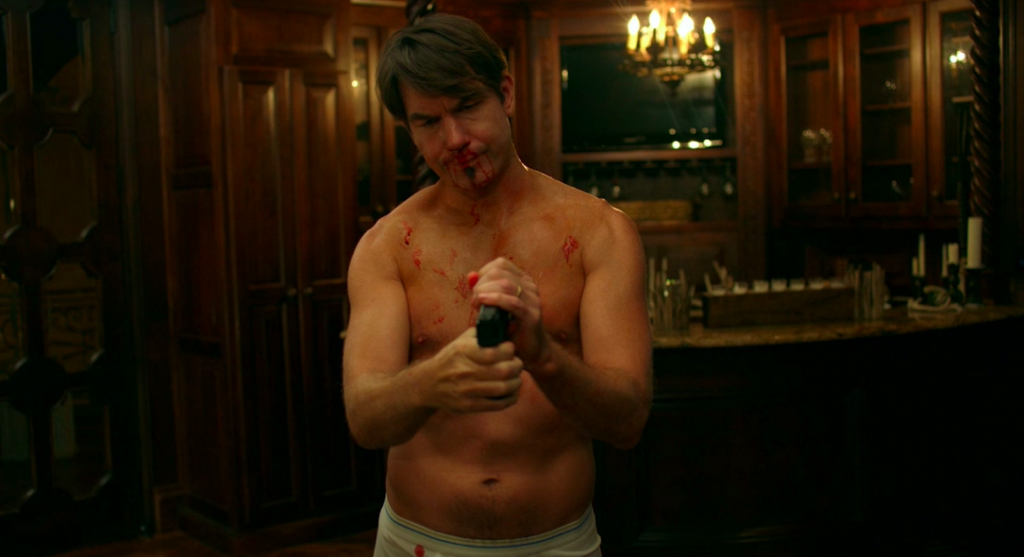 Seriously, you’ll just have to watch the movie if you want to know what is going on with this scene…

Much of the special and visual effects appear to have been of the old-fashioned handmade variety, an effort that should always be praised. Be forewarned, however; nothing about this is for the weak of stomach. The Doctor cannot stress that enough; Go Big Or Go Home is a philosophy that is adhered to in Satanic Panic. This film is not for children or those otherwise inclined to be of the squeamish variety.

Several aspects of the film do require a mental leap on the part of the viewer, but then again, don’t most movies? This should not be unexpected if you are watching a picture called Satanic Panic. Do not ask inane and pointless questions, just go along for the ride. Even if you are not going to take the Shudder plunge, I wholeheartedly recommend taking the Satanic Panic plunge (the movie, not the philosophy). As always, dear friends, in this time more than any other, The Doctor wishes you all a clean bill of health.