Pacing and temperament can either elevate a horror film or flush it into the sewer, and I am happy to report a case of the former with The Strangers: Prey At Night... 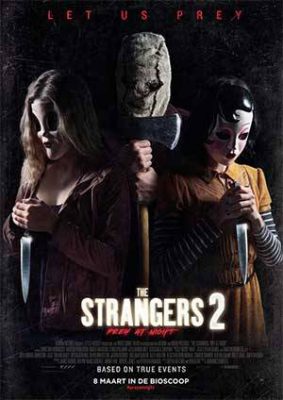 Perhaps there are some who consider the horror subgenre known as the slasher film to be an antiquated relic of the not-so-glorious past, and with good riddance. Nothing more than lowbrow entertainment for beer-drunk simpletons like The Doctor and others of his ilk, they say. Well, I say that everyone is entitled to express their opinions, even if they are manure-stained hipsters. When I saw that The Strangers had garnered a sequel – a pleasant surprise considering that the taut original film was released in 2008 – it was only a matter of time before I ventured to the cinema to take in The Strangers: Prey At Night.

Cindy and Mike (the busty Christina Hendricks and the less-busty Martin Henderson, respectively) are suburban parents who have been forced – or so they feel – to take draconian measures with their teenage daughter Kinsey (Bailee Madison) by packing her off to a remote boarding school. The audience is never informed precisely what heinous act Kinsey has committed, but both parents intimate that a pattern of increasingly bad behavior over time has led the family to its current quandary. What Kinsey has done is largely irrelevant – we know that she is a rebellious troublemaker because she wears ripped overalls and a black Ramones t-shirt and tries to sneak cigarettes. If she were chaste and good then she would dress accordingly… I’m sorry, I can’t help but poke fun at these obvious devices. As it turns out, they are often necessary, especially in a film like this one where it is essential to quickly settle the family dynamic. That Cindy and Mike might not be the world’s most peerless parents is slightly alluded to, and I salute the actors for demonstrating this with modest subtlety. Hendricks and Henderson are both in their early forties in real life, but they definitely pass for at least a few years younger which suggests that they became parents at a relatively young age. They are kind and caring and want to do best by their children, but perhaps they are sometimes overwhelmed. After stopping at the local baseball diamond to pickup Kinsey’s older brother Luke (Lucas Pullman, son of actor Bill Pullman) the family begins cruising down the open road towards their ultimate destination of Kinsey’s new school/jail.

The “family in conflict” or “couple in conflict” is not an infrequent framing situation in horror and suspense films. See the original The Strangers or Vacancy with Owen Wilson and Kate Beckinsale for other examples. Prior to the joining of battle, the viewer is primed with the information that the protagonists are suffering through a personal drama or malady of some nature. I would not label such a situation as overtired when it is established concisely and the actors are believable, which is certainly the case with The Strangers: Prey At Night.

Check out the Ramones t-shirt and the rebellious bubble-blowing! In truth, the lovely Bailee Madison delivers a revelatory performance in “The Strangers: Prey At Night”

Kinsey’s boarding school – one gets the idea that it is the polar opposite of Harry Potter’s Hogwarts Academy – is so far removed that it requires a two-day trip by car. The family is going to stay overnight at the rural getaway of Gatlin Lake where Cindy’s Uncle Marvin runs a rustic trailer park. I do not know if the use of the name Gatlin is a nod to Children of the Corn as the two films have almost nothing in common, but if so, I applaud the small acknowledgement. It is at this juncture that the movie really moves into another gear, both in terms of suspense and atmosphere. Credit is due to director Johannes Roberts and cinematographer Ryan Samul for creating a mood that can only be described as intense. The trailer park and its surroundings are dark and abandoned, and the filmmakers are adept with their use of lighting and shadows. One particular scene that stands out in The Doctor’s memory is a brief look at an assemblage of empty, wooden picnic tables situated in a low-lying ground fog. Pacing and temperament can either elevate a horror film or flush it into the sewer, and I am happy to report a case of the former with The Strangers: Prey At Night. With the scene set, our other “family” is shortly to arrive… 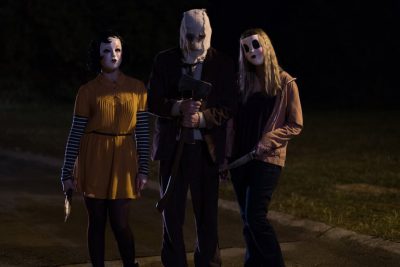 These people are NOT trick-or-treaters. Do not under any circumstances attempt to ply them with Reese’s Peanut Butter Cups

I hate to riff on tired tropes, especially because TNCC chairman Matthew Cade and myself have loved slasher films ever since we were old enough to pee without diapers, but why in the hell would anyone ever partake of an overnight stay at an abandoned lakeside trailer park? For the love of God, man! I’m fairly certain that Cade and I would crank ourselves up on black coffee and drive all night before engaging in such obviously questionable behavior. Then again, as undergrads we would eat something resembling “breakfast” at the legendary greasy spoon known as The Kettle restaurant before repairing to an isolated forest to smoke cigars, so what the hell do we know… Let’s move on.

Dollface, Pin-Up Girl, and Sack-Head (not his actual name in the credits, but I am using it) were truly frightening characters in the original Strangers movie and are perhaps even more so in this latest incarnation. Masks are obviously just props, but they are also a staple of good slasher horror. Not only are they exceedingly creepy, but they serve to dehumanize the killer (or killers) into something monster-like or mechanical. When the killers removed their masks in the film You’re Next, a tiny intangible something was lost for me. Only in the tight suspense thriller Hush did the killer’s mask removal not become a detraction. Michael Myers and Jason Voorhees would be the Babe Ruth and Sandy Koufax of horror franchises – these dudes were so precise that they never bothered to speak aloud – but if the masked killers in the Strangers films can only be described as an homage to their forefathers, then it is a worthy endeavor. The character of Dollface especially employs a true method of gliding into frame or stepping slowly out of the ethereal fog. In my professional opinion, this is a much more scarifying tactic then what has become known in horror film parlance as the jump-scare, a bush league tactic that is only employed once in The Strangers: Prey At Night, and that instance takes place more than halfway into the movie. The Doctor and Matthew Cade have each logged a number of semester hours studying slasher films that might be described as “troubling” by religious puritans or squares, so I feel entitled to speak on this subject. Dollface, Pin-Up Girl, and Sack-Head are not practitioners of physical torture, but rather a much more terrifying form of psychological torture that could accurately be referred to as sadistic teasing. When the time is right, however, they move in for the kill. There is one specific sequence that is wonderfully shot and acted next to a swimming pool at what I guess is supposed to be the trailer park’s fun zone. Such a scene helps to separate this film from other would-be contenders. 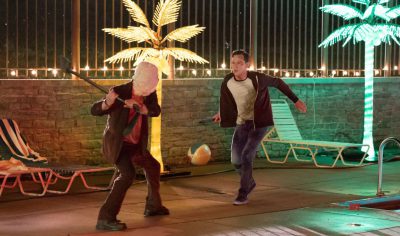 In addition to the overall spine-clenching terror and suspense, The Strangers: Prey At Night is the beneficiary of fine acting performances from all involved. In addition to the noted physicality of the slashers and the aforementioned supporting performances of Christina Hendricks and Martin Henderson as the parents, there is Lucas Pullman as Luke. Sure, Lucas almost certainly got his foot in the door thanks to his famous father, but the young man more than holds his own, especially once the shit hits the proverbial fan. The real star of The Strangers: Prey At Night, however, is eighteen-year-old Bailee Madison as Kinsey. Madison definitely encapsulates the role of the frustrated teenager and she is also capable of delivering highly realistic demonstrations of fear, confusion, and pain. The viewers will not be emotionally invested – and emotional investment with the heroine is a requirement in films of this nature – if we aren’t rooting for Kinsey, and Madison makes it work on all fronts in what had to be a challenging role for someone so young. The only thing I had seen her in previously was a really bad SyFy Channel horror film that I gave up on almost immediately, but she is so good in The Strangers: Prey At Night that I am tempted to go back and give it another chance. That is a major compliment coming from a lazy ass like myself. 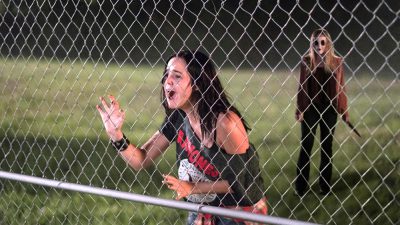 Kinsey (Bailee Madison) being terrorized by Dollface in “The Strangers: Prey At Night”

Who will survive? Will the “family in conflict” be able to come together and fight off their murderous agitators, or will villainy prevail? And did The Doctor become so frustrated by the nonstop text messaging by the trio of millennials seated next to me in the back row of the theater – texting that took place throughout the entirety of the movie’s eighty-five-minute duration – that after the denouement I lectured them on human decency while citing the landmark court decision of The State of Texas vs. Aquatic Fisheries? Ok, the last one didn’t happen -although it almost fucking did – and as far as I know such a court case does not exist, but I will not deliver spoilers on anything else. If you are bent of a mind to enjoy horror films, then check out The Strangers: Prey at Night at your earliest convenience. As always, The Doctor wishes you all a clean bill of health.