And the answer to your question is No, the film What Still Remains is not a documentary about the respective livers of the Tuesday Night Cigar Club, smart ass... 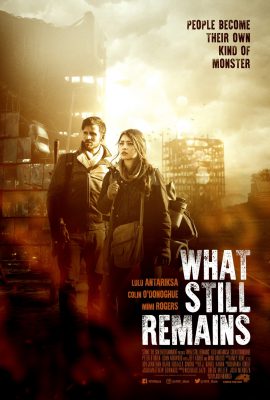 I was tempted late of one afternoon to finally take the Bird Box plunge and see what all the hullaballoo was about, but I could not overcome a mild trepidation at the 124 minute running time… and then when I heard that a few people had taken to wearing blindfolds outside because they were inspired by Bird Box, The Doctor abandoned the notion of ever reviewing it. I’m all for experiments, but, c’mon people. Seriously? Thankfully, the recent release on Netflix of What Still Remains was available. And the answer to your question is No, the film What Still Remains is not a documentary about the respective livers of the Tuesday Night Cigar Club, smart ass. The synopsis informs us that a young woman is living alone in a post-apocalyptic world when she is offered a chance by a strange young man to join his peaceful community… or is it? Throw in the fact that the young woman looked extremely attractive, and The Doctor was in.

The post-apocalypse movie – otherwise known as a doomsday movie or end-of the-world movie or aw shit movie – enjoys a rich and storied history involving myriad plots and subgenres, even when the presence of zombies is removed. They date back at least as far as 1936 with Things to Come, an H.G. Wells adaptation of one of his own novels. Another early classic is The Omega Man from 1971 starring Charlton Heston. And the list goes on. There are even starkly different environments that these movies take place in. On the bleak end of the spectrum – bleak being a relative term, as in all examples of the form, society has crumbled and almost everyone is dead – lies The Road, the film adaptation of Cormac McCarthy’s novel. The Road takes place approximately 10 years after a nuclear conflagration has turned planet Earth into a near-lifeless rock. A perpetually grey sky hangs over a landscape devoid of vegetation, dotted with stumps of dead trees and clouds of ash. The scenery in The Road is about as cheerful as World War I photographs of Passchendaele around 1917, only maybe worse. With nothing to eat save each other, it seems that any trace of hope has long since jumped on her ghost horse and galloped over the horizon. The Road makes the outback wasteland of The Road Warrior seem comparatively wholesome, even with the rapacious Wez and The Humungus running amok. 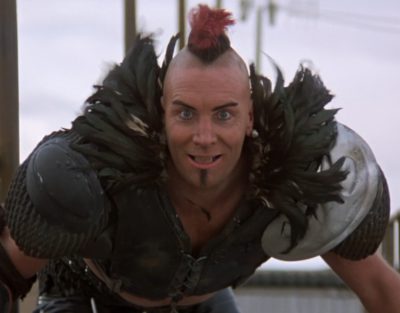 Should you find yourself one of the survivors in a post-apocalyptic world, you would do best to steer clear of this guy

An entirely different environment exists in Stephen King’s The Stand. Instead of atomic war, a biological weapon – in actuality, a deadly strain of the flu created in a military lab – is accidentally released. Known as Captain Trips, the bug terminates roughly 99% of the earth’s populace. The key to this environment is that nothing has been destroyed; sure, any processed food has decayed, but animals are still roving about the land and a certain level of infrastructure still exists. Religious implications abound concerning the saved or the damned, but is that such a bad thing in today’s world? Not for me. After all, as I have pointed out on more than one occasion, Jesus turned water into wine, so pour The Doc a glass and let us rejoice!

In What Still Remains, the environment is closer to that of The Stand. An unknown plague or illness has wiped out most of humanity, and the immune are left to fend for themselves. A young woman named Anna (the stunning Lulu Antariksa) and her brother, rifles slung on their shoulders, are searching for supplies in a deserted town when they are overheard by something or someone menacing and must flee the urban area. They are pursued deep into the woods, and when Anna’s brother David falls afoul of an animal trap, Anna has no choice but to leave him behind with the hope that he can hide until she can come back for him later. Of course, when Anna returns the next day, a crucifix and chain are lying on the tree stump where she last saw David and there is no sign of him. Anna tries to spare her dying mother the news; the three of them had been living inside a fenced-in enclosure complete with a cozy cabin deep in the woods. Unfortunately, Anna’s mother soon passes – whether she suffered from a remnant of the plague is never outwardly stated, though it is implied – and Anna is seemingly all alone. Anna’s mother had instructed her to find other people. “If we don’t have hope, what’s the point of living?” A query worth examining.

The lovely and talented Lulu Angariksa, contemplating knife blades and her future…

The woods serve to make the scenery of What Still Remains resemble something from a dark fairytale, which is an apt description of the film itself. The movie is also wonderfully shot, another example of spectacular cinematography adding to the visceral impact of a film. The lush greenery of the woods and the tall trees show an environment that is pure and potentially utopic. The resourceful – like Anna – survive by trapping buckets of fish from streams and sharpening their knives. Anna is engaged in such an activity when a handsome young stranger named Peter arrives near her home. Although also armed with a rifle – you need a firearm in any post-apocalyptic world – Peter claims that he is merely looking for food and fresh water. After forcing him to relinquish his weapons and determining that he is not sick, Anna invites Peter into her enclave and treats him to a meal. Peter subsequently invites Anna to leave her home and come with him to live in his “community” by the lake, a few days march away.

Whether or not Peter is good or bad remains to be seen. Adding to the surreal aspect of the fairytale is the existence of a malevolent band of marauders known as The Berserkers, who Anna feels are responsible for her brother’s death or disappearance. Is Anna better off alone? In this aspect of the narrative, What Still Remains captures the essence of any good suspense picture, which is that of placing the viewer in the shoes of the antagonist(s) and making us ask ourselves, what would we do in this situation? It takes a collaborative effort to produce this essence in a film, and the ones that rightly pull it off are to be commended. 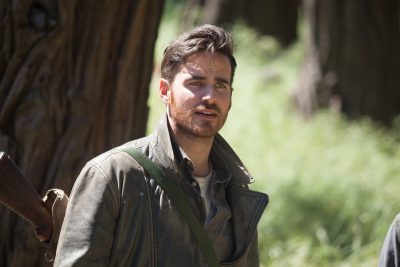 Colin O’Donoghue as Peter in “What Still Remains”

Peter remains a gentleman on their trek together, but a near accident causes Peter to intimate to Anna that there are other “factions” besides The Berserkers that may have to be dealt with. Who can trust whom? And who will remain good in a world with no rules? All the aforementioned examples including The Stand contain characters who remain good and those who turn – in a world of lawlessness – to rapine and murder. Who is to stop them? It’s akin to the larger sociological questions posed by The Purge films, and while this is not my field of study it has been an endless source of personal fascination and inquisition for The Doctor.*

The patriarch and matriarch of Peter’s lakeside commune are played respectively by film veterans Jeff Kober and Mimi Rogers. Kober, a singularly talented performer with a unique look – he’s something between Lorenzo Lamas and Steven Tyler – has appeared in scores of movies and television shows, while Rogers has the distinction of having been married once upon a time to Tom Cruise. Both bring gravitas to What Still Remains. Anna realizes that this community might be made up religious whackos, and suddenly the dangers of the outside wilderness seem a welcome respite from what might be a potential Jonestown – or worse. Anna, however, is tough as nails, and Angariksa delivers a nuanced performance of a young woman who is wise beyond her years, wounded and wary but nonetheless capable of taking of herself. Angariksa’s IMDB resume is made up mostly of television work, but she is young – 23 as of this writing, according to IMDB – and she nails her performance as Anna. I will keep an eye on her future work. And The Berserkers are still out there… 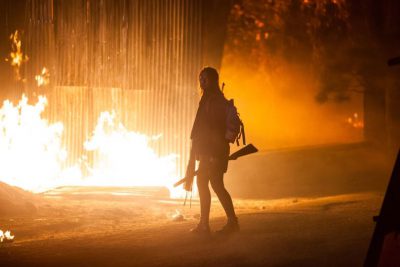 Is What Still Remains a morality play? Its themes are dark, but worth pondering. And if you don’t want to ponder themes, then What Still Remains is also just an entertaining movie, albeit one from a specific genre that is admittedly not for everyone. It was, however, entertaining for me, and I recommend it. As always, The Doctor wishes you all a clean bill of health.

* I would be one of the good guys in the post-apocalypse world, but then you knew that already. TNCC chairman Matt Cade once said that if a zombie plague were to break out that he would go to fellow TNCC member Yak Boy’s house, because there would be guns and whiskey in abundance. I can’t argue with that logic, and I’m a man of science. So head for Yak’s place if the world goes tits up. Sure, we’ll all be armed to the teeth and drinking heavily, and no doubt some accidental deaths would ensue, but we still beat The Berserkers and their ilk. I think.