Why do I have a feeling that Demi Lovato is going to get triggered and attempt to cancel me for writing this review? I promise, I’ll do better.

I have to openly admit right at the forefront of this review that I am not an ideal consumer for this line of cigars, in the sense that I would never give the Munchies Rocky Road a second glance if I came upon it on the shelf of my local tobacconist. I rarely if ever smoke infused (aka flavored) cigars and I’m not a fan of Rocky Road ice cream. In fact, I don’t believe I’ve ever so much as tasted Rocky Road ice cream.

I know that Jas Sum Kral’s new line of Munchies cigars is getting quite a bit of press lately so when brand owner Riste Riatevski asked us for our address to sample some of his Rocky Road blend I said sure, go ahead and send them. Luckily they didn’t melt in transit… 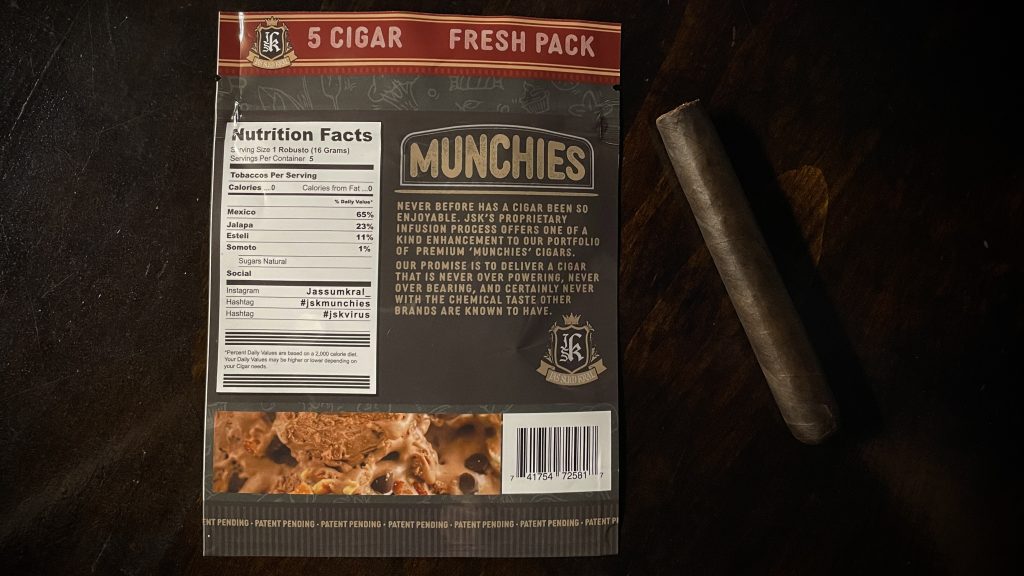 The Mexican San Andrés wrapper is nearly black in color and there’s just the desired amount of give when squeezed between two fingers. I’m almost afraid to smell the Rocky Road in fear of overwhelming sweetness but when I finally force myself to take a whiff there’s only a tinge of sweetness evident on the oscuro wrapper. HOWEVER, when sniffing the foot of the cigar directly you’ve got an aroma identical to that of a chocolate sundae. Chocolate ice cream, hot fudge, and a faint caramel. No shit. 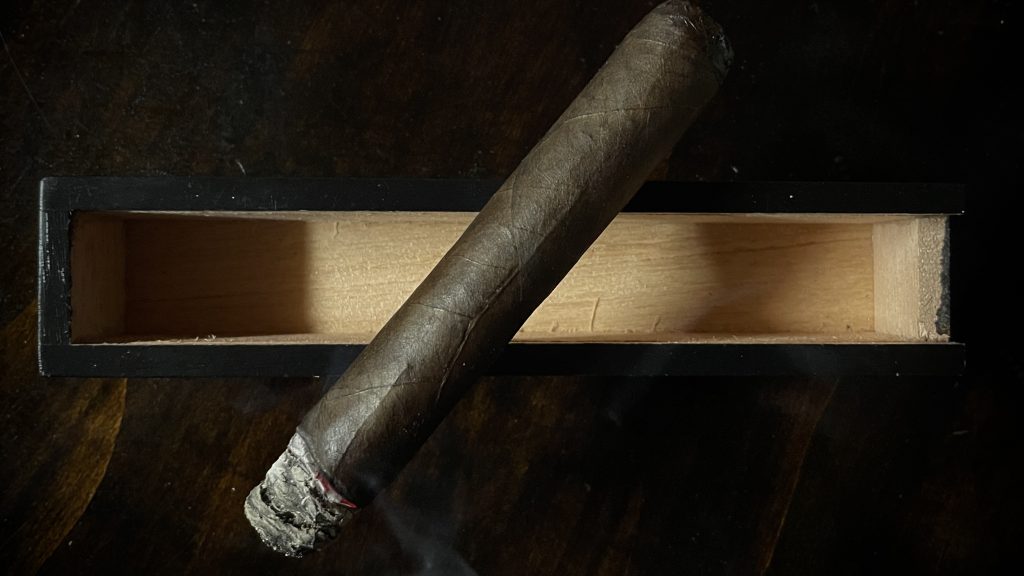 Somewhat surprisingly, the cold draw is void of anything you’d associate with a Dairy Queen drive-through, there’s only the slight essence of hay and some minimal earth present. Upon ignition, Hershey’s chocolate syrup and rich chocolate ice cream are equally flooding their way through the nose while the draw features more traditional notes of cedar and a lighter roast coffee. In other words, the inner fat kid in you will really dig the retrohale while the more seasoned traditional cigar smoker in you will feel safe and comfortable with the flavors that the draw is presenting. And what, I have to ask, are you doing with these two vastly different characters inside of you? Weirdo. 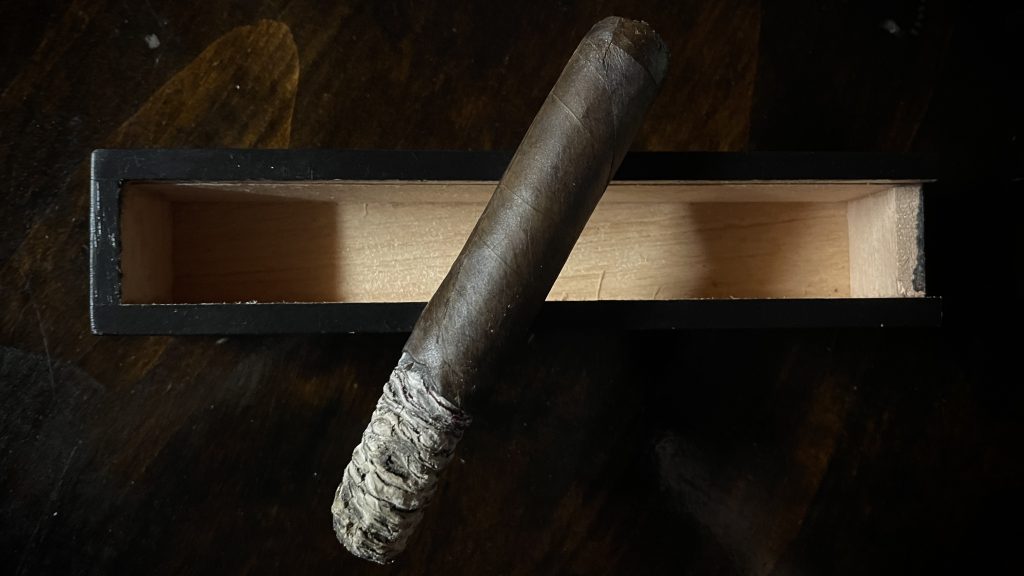 At around the 1” mark, the overall chocolate that’s continuing to rule the retro takes a turn towards the darker side of the candy aisle. Yes, folks, dark chocolate (think Dove Red Label for you snacking enthusiasts) is now joined by espresso and marshmallow. Why do I have a feeling that Demi Lovato is going to get triggered and attempt to cancel me for writing this review? I promise, I’ll do better.
It’s worth mentioning that the aroma pouring off the Rocky Road smells strongly like a chocolate candle you’d find for your aunt’s birthday at the Dollar General store and the cashier would just give it to you for free out of pity. 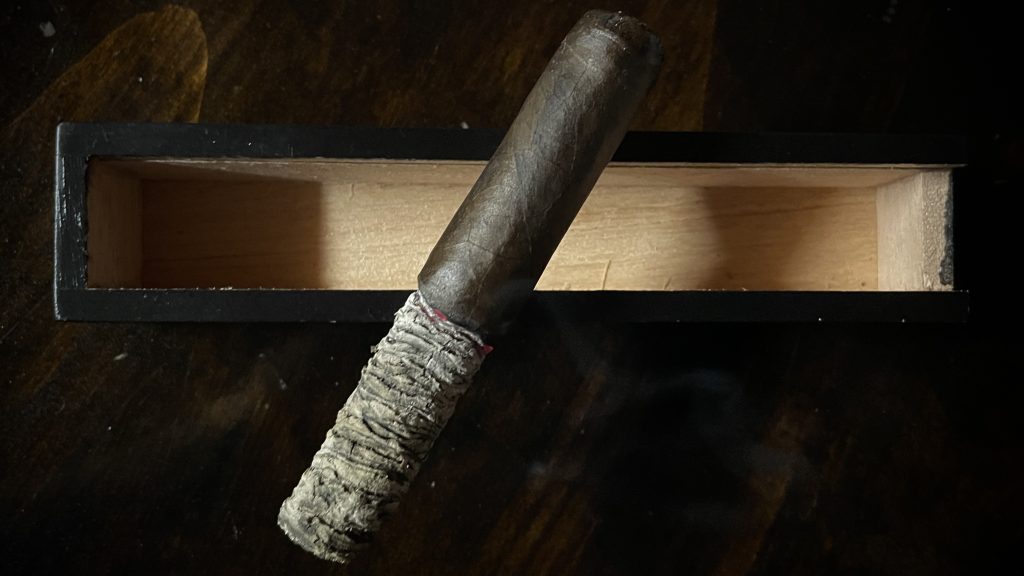 Entering the middle portion of the cigar, I can report back that construction overall is impressive with a smooth draw and consistent burn that produces a lovely stack-o-chocolate-chips-ash. The espresso and charred marshmallow notes are screaming loudly now through the nose while medium cedar backed by just a sprinkle of sweetness is the draw’s fairly consistent profile. The Rocky Road begins to burn a little hot on the lips right at the fifty yard line so I intentionally slow things down, puff less frequently than I prefer, and that seems to resolve that minor issue. And then, right when I start to relax, a hot fucking cocoa flavor kicks down the door of the retrohale and starts swinging its big Swiss dick around. Does this cigar come with a diabetes brochure? 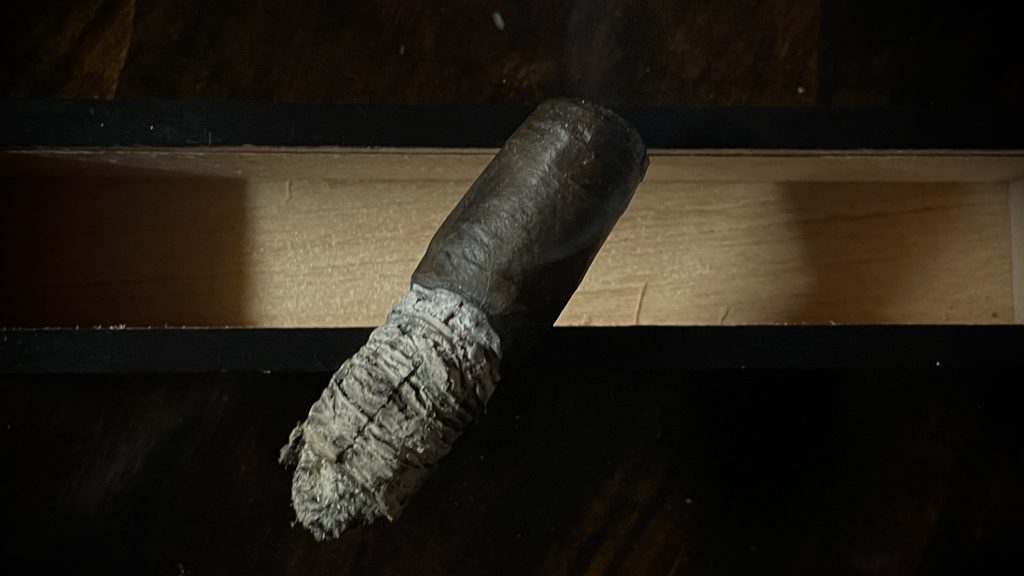 The Rocky Road’s final serving is a compilation of everything that came before it all at once. Cedar, coffee, chocolate ice cream, fudge, toasted marshmallow, dark chocolate… It’s like a symphony of destruction conducted by Kirstie Alley in the back room of a Baskin-Robbins creamery. Oh great, now Demi Lovato is gonna read this paragraph and get triggered on behalf of Kirstie Alley and try to add additional charges to my preexisting pending cancellation. Ex post fucking facto. Well that’s just great…
Anyhoo, at 55 minutes in the Rocky Road starts to burn a bit hot so I drop it in the ashtray, wipe my face clean, and leave the Friendly’s Family Restaurant in handcuffs. I was warned, this is fair. 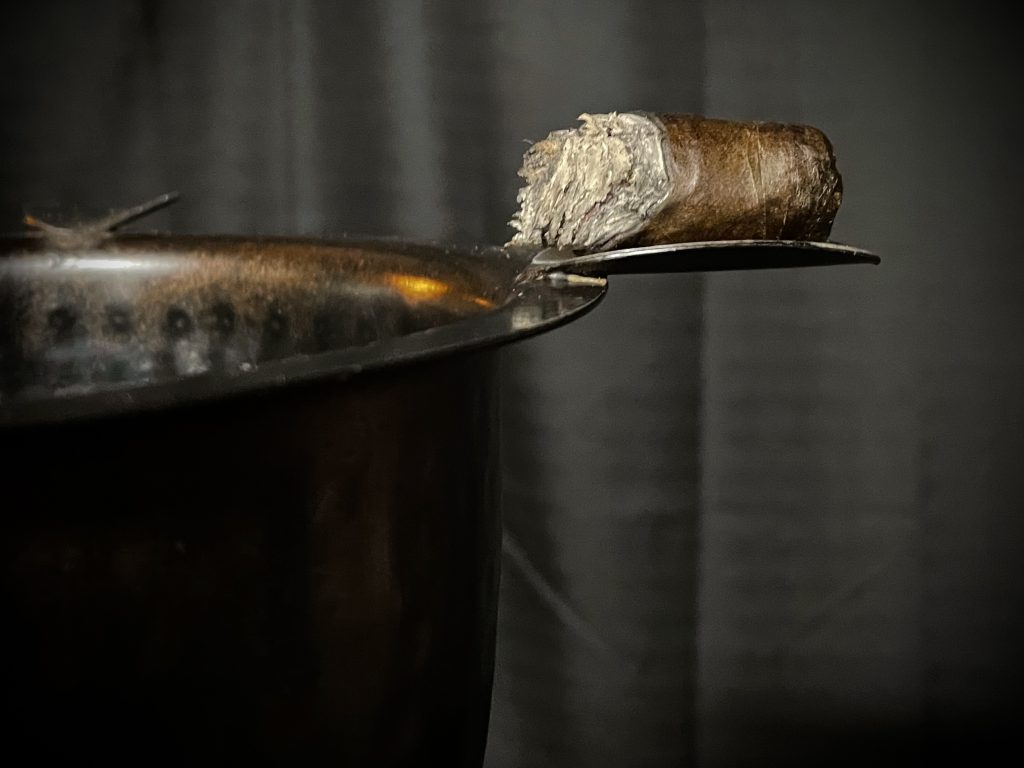 I enjoyed the Munchies Rocky Road cigar quite a bit. Is this type of marketing a bad move in an industry already facing crippling FDA scrutiny, potentially giving the feds some much needed ammunition for their (incorrect) argument that premium cigars are being marketed to kids? Yes, I believe so. Does Riste have every right to do whatever the hell he wants to within the laws and regulations that are currently in place? Of course he does and he’s not the first businessman to put himself before the “team” in the pursuit of personal success. When one constantly feels like an outsider in his or her given industry, whether that perception is legitimate or not, their natural instinct can be to rebel in a big way with both middle fingers pointed north. While I don’t believe that is Riste’s honest intent here, to sit back and watch the whole shithouse go up in flames, releasing any tobacco product dressed up as a bag of ice cream is turning a blind eye to the possible regulatory firestorm that could result from it. If the Munchie line of cigars becomes a grand slam in terms of both popularity and profits, the only one who will benefit from this windfall is Riste. And, of course, those consumers who enjoy his Willy Wonka shenanigans for as long as they remain a legal product. 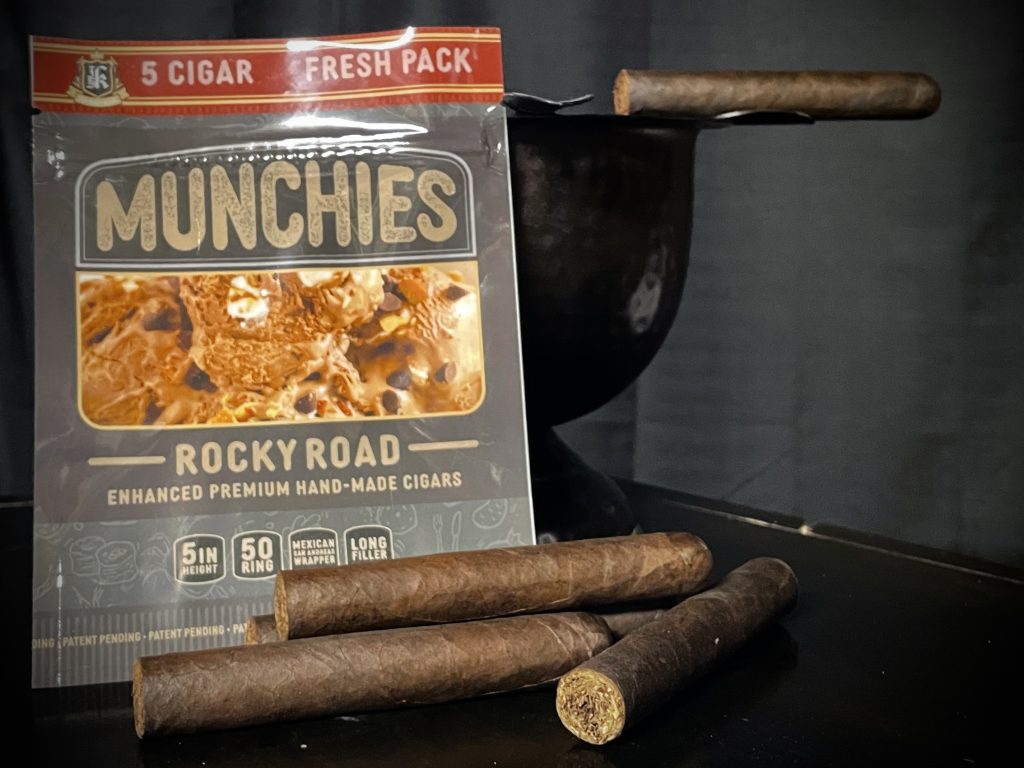 But while I may wish that this cigar was called Sladoled or Čokolado (Macedonian for ice cream and chocolate respectively) and not packaged in the cheesy freezer bags – the product is what it is and that’s simply that. No amount of wishing or commentating will change things, and if you value your own creative freedoms then you have to accept Jas Sum Kral’s right to make their own choices whether you agree with them or not. Let your opinion be heard with your wallet as they say… AND, at the end of the day, who am I to criticize or comment on any cigar manufacturer’s marketing tactics when one of my favorite cigar boxes has two donkeys fucking on the box top? 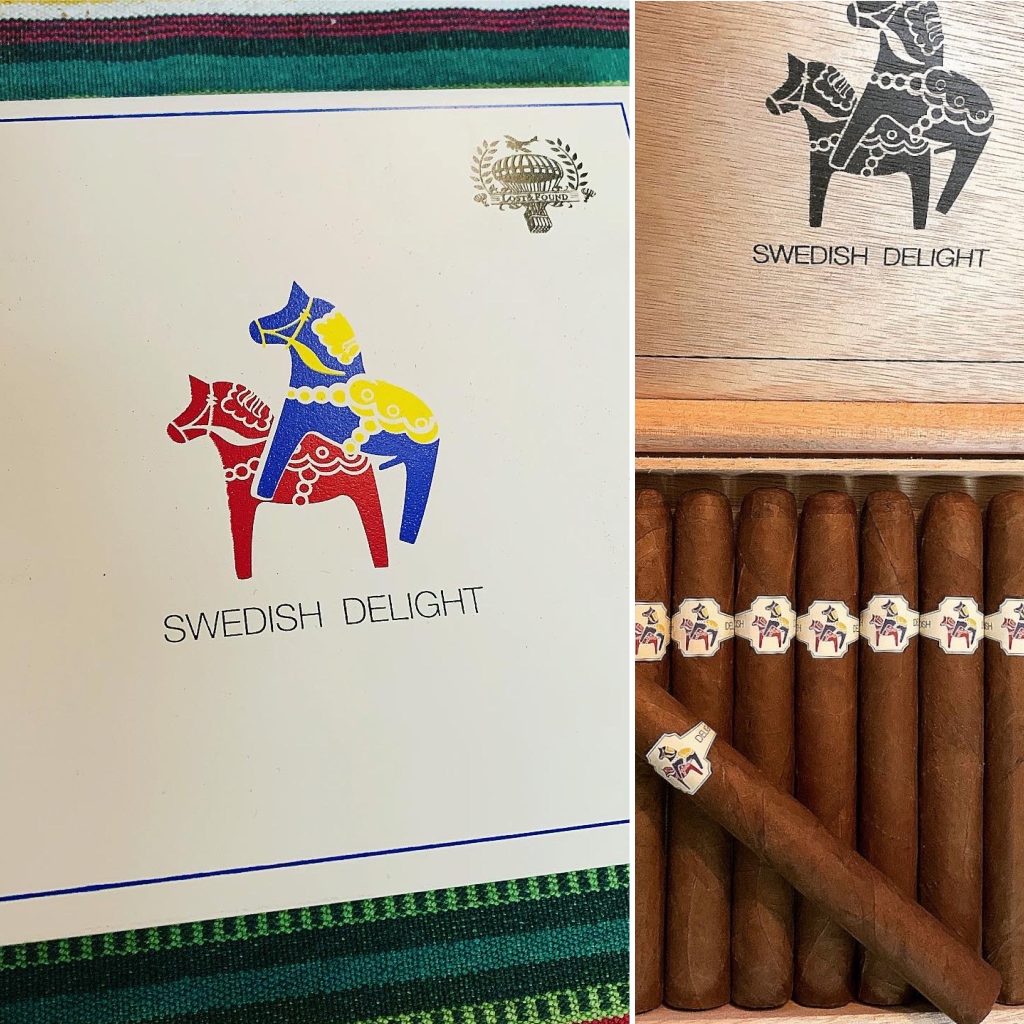 photo courtesy of the TNCC “After Hours” humidor

Well thanks to Riste, I am now off to hopefully post bail and then procure a pint of rocky road ice cream so I can see how closely he actually dialed in this cigar. What?!? It’s for professional cigar research purposes, you judgmental assholes.