This immature, ham-handed effort at getting his carrot wet immediately qualifies him to join the TNCC on a probationary period. Once he is old enough to smoke cigars, of course... 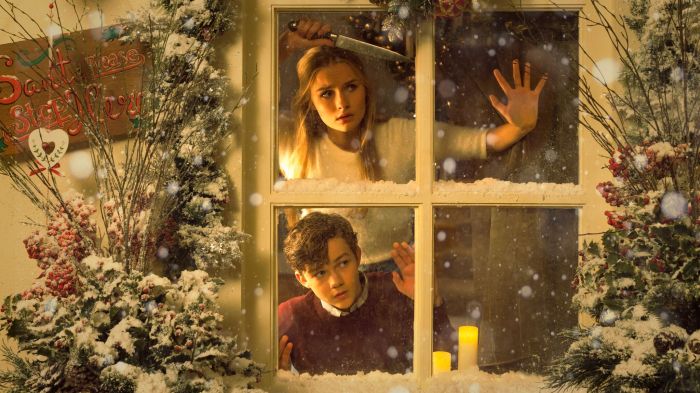 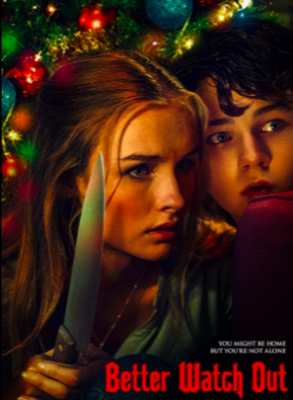 “Twas the night of the Tuesday Night Cigar Club Christmas show, and all through the house,
not a creature was sober, not even The Doctor’s pet mouse….” 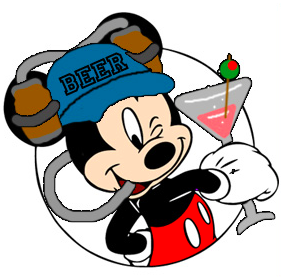 And so much for my attempt at poetry. I had a line prepared that went something like this:
“Our stockings were misplaced, but the candles were lit,
who the fuck made the eggnog, it tastes like reindeer shit.”

It was at that point that I abandoned my inner Walt Whitman and decided to tackle the business at hand. Tis the Yuletide season once again, and that meant finding a Christmas-themed movie to review in time for the holiday. The diligent-as-ever Cade suggested Better Watch Out, a Christmas horror movie brought to us care of Storm Vision Entertainment and Best Medicine Productions. With a bountiful supply of my own “best medicine” nearby, I forked over the $5 to Amazon and nestled into the couch in my lair as gusts of the early winter winds lashed at the window panes…

Foul-mouthed, bastard children are at play on the frozen streets of a snow covered, upper-middle class suburb… and that is really as close as Better Watch Out gets to anything approaching a Christmas theme. It could have had a different title and taken place on Easter or Arbor Day as nothing about the actual holiday was germane to the plot of the film’s action. Cute, blonde, seventeen-year-old Ashley (Olivia De Jonge) is driving to one of the suburban McMansions for her babysitting gig when a black cat crosses her path! Either young Ashley is unburdened by superstition or else she is badly in need of the babysitting lucre because she foolishly continues on her way. I realize that it is unbecoming of a man of science like myself to have a superstitious nature, but dammit, I can’t help it. The Doctor avoids walking under ladders and anything having to do with the numeral thirteen, and when it comes to black cats, if one of the ebony felines crosses my path then I immediately return back to my domicile and crawl under the sheets with a jar of vodka soaked olives. I suppose if Ashley had turned around – which she should have – then there would have been no movie. Whether or not THAT would have been fortuitous, well, more to come.

We then meet twelve-year-old Luke and his best pal Garrett, played respectively by Levi Miller and Ed Oxenbould. Luke has made plans to lay his babysitter when she arrives, and he has concocted an elaborate fantasy in his mind where such a turn of events might actually be possible. As with the recently reviewed The Babysitter, I again was made to ask myself: do junior high-aged boys require a babysitter? Ashley is a sneeze older than Luke, and in real life these performers are even closer in age. Granted, this detail did not bother me as either The Babysitter or Better Watch Out progressed, but I still felt that it was noteworthy. Babysitters, like diapers and Speak-N-Spell, are for the youngest of children.

Luke’s parents only make a perfunctory appearance, but they are played by the always enjoyable Patrick Warburton and the absolutely luscious Virginia Madsen. I wrote down the word MILF-TACULAR, but I thought she just looked sexy so let’s go with that.

Speaking of The Babysitter, the relationship between Luke and Ashley in Better Watch Out is nothing like the relationship between Cole and Bee in the aforementioned film. This is work for Ashley, and she really isn’t interested in being pals. Luke, however, his adolescent fantasy in full flush, actually pops a bottle of his parents’ bubbly in a misguided effort to seem manly. This immature, ham-handed effort at getting his carrot wet immediately qualifies him to join the TNCC on a probationary period. Once he is old enough to smoke cigars, of course. The little pudknocker honestly thinks he has a chance at getting into Ashley’s panties, but this will not prove fruitful when push comes to shove. 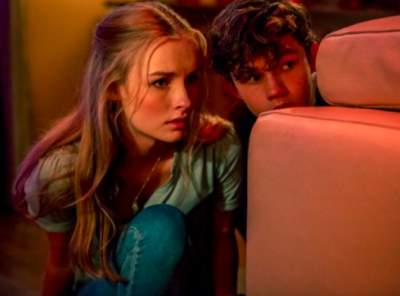 The premise of Better Watch Out is that Luke and Ashley will be terrorized on this snowy night by home invaders who begin to lurk in the shadows until eventually gaining entrance into the house. The house itself is vast enough to support a “home invasion” horror film, always a necessity. The tension meter kicks up a notch, including a scene where a brick is thrown through a window with the words “U LEAVE, U DIE” carved into it. I liked this touch, although there is no truth to the rumor that I once handed a brick with the exact same inscription on it to a Twin Peaks waitress who had caught my fancy and that she then beat me over the head with it. No truth whatsoever to that rumor. Excuse me, it appears that I have once again became lost in pointless digression. It’s a Christmas miracle! Let’s move on.

After setting the stage and establishing the principal players, Better Watch Out then proceeds to make a 180-degree turn, although truth be told, it was not entirely difficult to have foreseen what was coming. Your favorite Doctor was a touch vexed over how to communicate this part of the review, but I eventually decided that I wasn’t breaking my no-spoilers rule by revealing a plot twist that occurred well before the film was even half over. There are no mysterious perverts lurking in the shadows and posing as pizza delivery men, and there are no hooded invaders peering into closets with flashlights and shotguns; Luke and his friend Garrett staged the ruse themselves as an elaborate back-up plan once Ashley dismissed Luke’s romantic advances. And it’s no innocent prank, either, because Luke is a prepubescent psychopath! Ashley is soon trussed up like a Christmas goose while her ex-boyfriends are tricked by Luke into coming over to join “the party.” 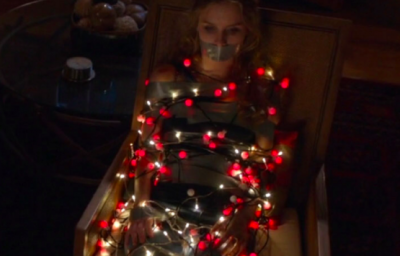 With Ashley tied up and Luke growing increasingly batty with each passing moment, Better Watch Out curiously doesn’t have anywhere to go. The film almost becomes – but thankfully does not – a psychological version of “torture porn” which is a played-out subgenre that The Doctor never went for to begin with. Miller gives an eerily convincing performance as Luke, even if the path that the character takes is somewhat out of left field (I blame the writers for that.) None of the performers are at fault here; De Jonge’s Ashley has to run the emotional gamut while being alternately gritty and physical, and she gets an A for effort. Dacre Montgomery, recently seen as the memorably over-the-top Billy Hargrove in Stranger Things 2, injects a little bit of fun in an all too brief appearance. But other than the cinematography, The Doctor’s praise will end there. Will Ashley escape? Will Luke have his comeuppance, or will he live to terrorize a different babysitter on another day? And did I give a shit anymore by the time the film ended? Not really, I’m sad to say. Better Watch Out isn’t a bad film; unfortunately, the revelation so early on that Luke is the villain is a bad decision, one that in my opinion the film can never fully recover from. If you disagree and think that I am clumsy of mind and/or inebriated, all I can say is that those assertions have been made before. As always, The Doctor wishes you all a clean bill of health, and a hearty Merry Christmas.*

1.) Do not hire a babysitter. They are almost always going to make a bad situation worse. If you have sired children that cannot fend for themselves with a remote control and a microwave oven, then for God’s Sake, stay home and do not attend Christmas mixers that you probably didn’t want to go to in the first place. However, The Doctor is available for babysitting at negotiated prices

2.) Own a firearm, but only if you have an IQ over 52 and are capable of keeping said firearm somewhere that your children cannot access it. The Doctor doesn’t have children, but this doesn’t seem that difficult

3.) Apply rule #2 to your booze supply, perhaps with even more resolve

4.) If you think that you have a child that might be a psychopath bent on murder and perversion, seek professional help immediately. I can be reached through the Tuesday Night Cigar Club. Then again, it’s probably best if you don’t reach out to me at all

5.) Merry Christmas, and try to be a beneficent soul. Even 1$ is helpful to somebody somewhere

6.) If you find yourself in the throws of strong drink and feeling that it is not only a good idea but perhaps the best idea you have ever had to urinate on the Christmas tree, make sure it is not plugged in 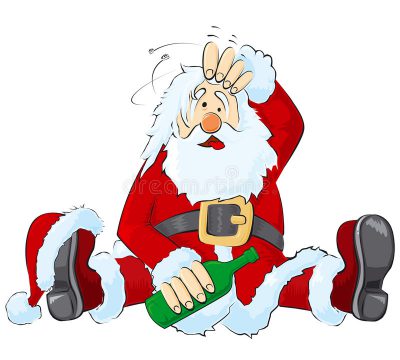