Whenever a tale of the old west makes its way to the local cinema, I feel inclined to saddle up my roan steed and gallop off to the hitching post... eh, forget it, I went to see Hostiles. 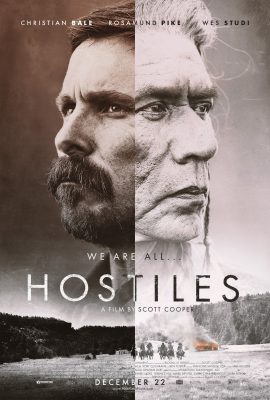 These days western films enjoy a theatrical release about as often as The Doctor’s Dallas Cowboys win playoff games – well, that’s unfairly inaccurate, there have been more than two westerns released in the last twenty years, but I’ve made my point. Whenever a tale of the old west makes its way to the local cinema, I feel inclined to saddle up my roan steed and gallop off to the hitching post…eh, forget it, I went to see Hostiles.

It is 1892 and mop-up time on the closing American frontier. The last battles of the Indian Wars are receding into the past. Veteran Indian fighter Captain Joe Blocker (Christian Bale, stern of jaw and bushy of moustache) is given his final mission before retiring from the army. The hardened soldier is ordered by the commanding officer of his remote New Mexico fort to escort the dying Chief Yellow Hawk (Wes Studi) and his few remaining family members back to their ancestral lands in Montana. Blocker views the chief and his ilk as nothing more than filthy, murderous savages and indignantly refuses the order, even though it is a presidential decree. The Colonel’s admonishment that Blocker himself is indeed far from innocent fails to sway him, but the threat of removing his retirement pension strikes a chord. Needless to say, Blocker does not begin this journey whistling Camptown Races.

Once freed from the vision of the fort, Blocker challenges Yellow Hawk to a final knife fight, which the stoic and ailing chief refuses. The chief is then placed in chains and his women are ordered to undo their braids. Blocker may be under a presidential order to see Yellow Hawk delivered safely to his old stomping grounds, but dammit, he is going to do it his way. 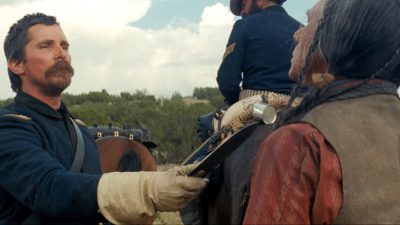 Christian Bale as the weathered Captain Joe Blocker in “Hostiles”

Whatever one thinks of Bale on a personal level, there is no denying the fact that he plunges into any and every role he takes with startling professionalism, and that is epitomized in Hostiles. The symbolism of the end is overwhelming; it is the end of Joe Blocker’s long career in the army, the end of any threat from rogue Native Americans and the end of what the western frontier represents. It is even the end of the century. The lesson of how awfully the white man has treated the natives and how viciously they have fought one another as this chapter of history closes remains the constant theme throughout Hostiles, and Bale’s Captain Blocker has been a witness and participant to its bloody proceedings. He is a troubled man, conflicted by the events of his life and certainly by the demands of his final mission before being mustered out of the army.

The traveling party doesn’t venture very far before coming upon Mrs. Quaid (Rosamund Pike) whose husband and children have recently been slaughtered by a small group of marauding Comanche. This is historically false, as by 1892 the Comanche had all but been annihilated by bullets and disease or confined to reservations in Oklahoma to live out their days in passivity, but it is a necessary adjunct to the narrative. The near catatonic Mrs. Quaid serves as an unneeded reminder to Blocker and his men of the wanton savagery of the Indians. 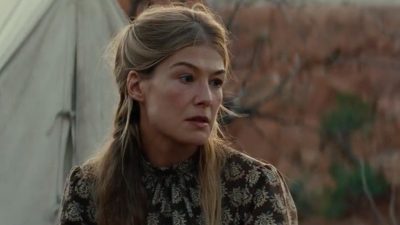 Rosamund Pike as the mourning Mrs. Quaid in “Hostiles”

Hostiles is dark and often depressing, sparing the viewer no quarter as it peers into the souls and motivations of the broken men and women who are still living in relative isolation as the nineteenth century draws to its close. Unfortunately, the film has a tendency to drag in some parts and risks going over the falls with blatant emotional string pulling here and there. That the white man, backed and instructed by the government, more or less attempted to systematically eradicate the Native Americans and their way of life – and that the Natives were forced to respond in kind – is well known to any worthwhile student of American history, but I am afraid that at times Hostiles comes close to hitting us over the head with it. I’ve stated before that I detest bitching about running time – such whining is a pet peeve of the Doctor and TNCC chairman Matthew Cade – but some scenes do run a touch too long in places.

Having said that, the beauty of the western genre is on full display in Hostiles. One factor that makes westerns so compelling is the opportunity to display the lush scenery of the plains, and complements are due to cinematographer Masanobu Takayanagi for the work done in New Mexico and Arizona. The acting delivers on all fronts, not only Bale and Pike but also from Bale’s fellow weary soldiers, particularly Jonathan Majors as Corporal Henry Woodsen and an unrecognizable – to me, at least – Rory Cochrane as Sgt. Tommy Metz. It has been twenty-five years – I know, it kills me too – since Cochrane delivered his memorable performance as the perpetually stoned Slater in the seminal Dazed and Confused, and here he is all grown up in Hostiles serving as Captain Blocker’s right-hand man and occasional conscience.

Be forewarned that Hostiles has its share of bloodletting and not everyone is going to make it to Montana in one piece, if at all. The action sequences are crisp and intense but, as previously stated, sometimes the space in between is a little wanting, which unfortunately makes me a tad lukewarm overall with my feelings and attitude towards Hostiles. However, if you are a fan of the genre, whether your preference leans more towards revisionist pieces like The Wild Bunch or you are more of a Duke Wayne type, then Hostiles is definitely worth checking out. And don’t forget to grain your horse while you are having a tipple with me in the saloon. As always, The Doctor wishes you all a clean bill of health.

A Tuesday Night Cigar Club Tribute: When Movies Were Fun and Men Were Men