What's does a mummy like to listen to on the radio? Wrap music!!! * 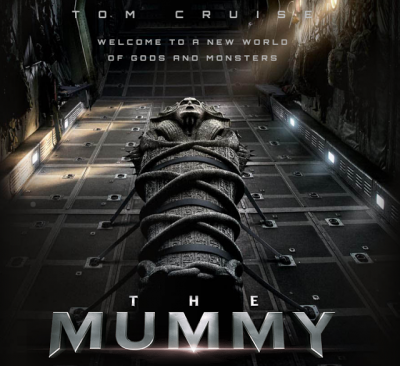 Certain turns of events had transpired against me recently in The Doctor’s office and caused me to reason, in as much as I am capable of sound reasoning anymore, that time had called for a sojourn to the local movie theater. I even went sober – well, sober-ish – which is admittedly uncharacteristic but everything turned out okay in the end. Or at least it did last Wednesday, as far as any of you know. I needed to return to the realm of horror, or at least a close approximation of it, so I abandoned my labor and made for the cinema where I purchased a ticket for The Mummy starring Tom Cruise.

I bought snacks. The Doctor really likes to butter his popcorn. And I mean I soak the sonofabitch to the point that it leaks through the bag and seven napkins and on to my lab coat. I realize that this habit is unbecoming due to obvious health hazards, but if I’m not drinking then I have to have some sort of vice. Let he who is without sin cast the first butter. Wait, that isn’t in the scriptures… Ok, you caught me, I’m not sober, I’m not sober at all.

I possessed at least a trifle of excitement at the prospect of seeing The Mummy, perhaps because I have never seen the iterations involving Brendan Fraser. This isn’t a case of Fraser-Bashing, as I personally have nothing against the man, I just never saw his Mummy movies. As Cade pointed out in his Skinny Mummy cigar review, those Mummy flicks did give birth to The Rock as “The Scorpion King”, flashing a mullet that only a mummy could love! Oy vey, I can’t promise that I won’t use more of those…

We are treated to some back story via a voiceover provided by Russell Crowe (in between cheeseburgers) while witnessing workers perform an excavation in the grey bowels deep under the streets of London. In ancient Egypt, Princess Ahmanet (the exotically sexy Sofia Boutella) is in line to be heir to the kingdom until her father, the horny Pharoah, sires a son. Ahmanet gives herself over to the dark side by slaying her family and is almost finished with a ritual designed to raise the demon deity Set before she is stopped by the Pharoah’s minions and mummified. Her sarcophagus is then taken far away and entombed. Sheesh, talk about a rough weekend. The Knights Templar visit the region centuries later during the Holy Crusades and are rumored to have taken treasures and artifacts back to the west, perhaps even a ruby stone that is needed in the ritual to summon Set…

We then jump to Iraq and meet Morton (Cruise) and Vail (Jake Johnson of TV’s New Girl), a pair of long range recon patrol (LRRPS, or Lurps in Army lingo) soldiers who leverage their freedom of movement associated with their jobs to search for antiquities in the Mesopotamian desert like latter day Indiana Jones style adventurers. They are lovable rogues, fighting for their country but wanting to scrape up a little scratch on the side. Cruise’s Sgt. Morton is a thrill-seeking rake who stole a map from a woman he was bedding and has led his pal Vail out to a Middle Eastern slum in search of potential treasure. Unfortunately, the slum happens to be an insurgent hotspot and they narrowly escape with their lives. Johnson ably hangs with Cruise in the scenes that they are in together, and that says quite a bit for his capabilities. 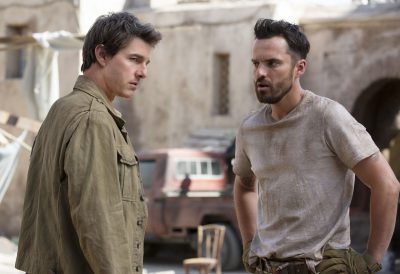 Jake Johnson, on the right, as “Vail”. He’s a supporting player, but he brings his A-game and meshes nicely with Cruise in the scenes that they share. That’s a fucking compliment. Well done, Jake.

It turns out that Morton stole the treasure map from the lovely Dr. Halsey (Annabelle Wallis) who assumedly is less angry at the fact that he loved and left as she is at the fact that he stole her map. After the insurgents are cleared away, Dr. Halsey and the would-be soldiers of fortune are allowed to descend into a cave to see what lies beneath, under the auspices of Col. Greenway, played by the always enjoyable and underappreciated Courtney B. Vance. They find the tomb of Princess Ahmanet, load it on a cargo plane in the face of a rapidly approaching sandstorm of biblical proportion, and now we are off and running!

The trailer we’ve all seen of the harrowing airplane crash is even more frightening (and impressively shot) when viewed in its entirety. How does Morton survive, other than the fact that, ya know, he’s Tom Cruise? By freeing the Princess from her tomb, Morton has cursed himself, as Ahmanet has now chosen him to be her sacrificial paramour in the ritual required to raise Set. Or something like that.

The Mummy borders at times on ridiculous fantasy, but it is a compliment to the filmmakers and actors that the film seems to revel in its ridiculousness. It changes in tone from a tale of Indiana Jones high adventure to a supernatural horror film and even has elements of Ash fighting the dead-ites from time to time as Cruise bashes zombie skulls off of their decayed, reanimated corpses. 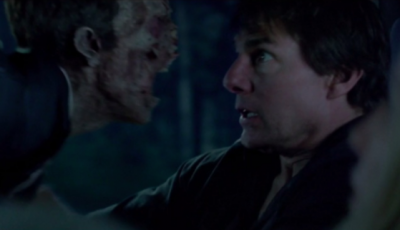 Tom Cruise as “Sgt. Morton” in an Army of Darkness-esque moment.

Somehow The Mummy manages to thread these disparate elements of tone and structure together, and it should surprise no one that the main reason for this is the performance of Tom Cruise. He has been delivering commanding performances for over thirty years now in every genre and he does so again here. The rakish persona, the physicality and a superb comedic timing are all on display, and it bears repeating that Cruise doesn’t appear to have aged in twenty years. He has always had the reputation as a staunch professional and that certainly hasn’t changed. Sounds like The Doctor, doesn’t it? A handsome, rugged professional… Wait, no one has ever said that about me. I’ve even offered people money to say that about me and they still wouldn’t do it. Jerk-asses. 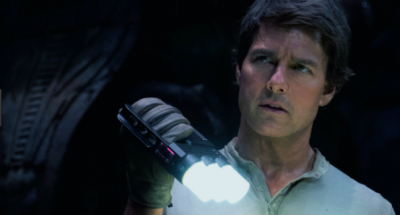 No one ever confuses this guy with The Doctor, even though I am also a man of high adventure.

The film looks good, also, switching from the brightness of the Persian desert to the damp, smoky darkness of London at night. Of course, there are going to be some CGI spectacles to endure, but that is expected with any sort of action/horror film these days, so it is starting to be less bothersome (as long as it isn’t relied on.)

Eventually we are fully introduced to Russell Crowe as Dr. Jekyll – yes, the very same – who is leading some sort of unknown, underground army of pilgrims against the world of monsters. Whereas Cruise looks like he hasn’t aged in twenty years, Crowe, well… ok, I’m not going to be mean, I’ve always liked Crowe. I’m not saying that he looks like an old leather satchel that The Doctor slept in last night, because that would be harsh and untrue as well, but he isn’t exactly built like Maximus anymore. I feel bad for even saying that, I’m an asshole. Let’s move on.

Will Tom Cruise save the day with the help of Crowe’s Dr. Jekyll and his minions, or is the apocalypse nigh? Is Universal going to swamp us with a deluge of remakes of horror classics? Probably, but what the hell, why not? I’ll begin my swim training in the hopes that I can be in the running for the role of The Creature of the Black Lagoon. Tomorrow, that is. In the meantime, check out The Mummy. It is a highly entertaining yarn with good performances, led by the inimitable Tom Cruise and more than worth the price of admission. You don’t even have to watch it Doctor style, which means that you have a soaked bag of popcorn and a laced soda. The Mummy is an entertaining and fun picture on its own. As always, The Doctor wishes you all a clean bill of health.

*It needs to said that the mummy “joke” shamelessly inserted below the title of this review was the work of yours truly, Matt Cade. I apologize to The Doctor for bringing his stellar writing down a notch with my lame attempt at humor… however, if you in fact think I’m hilarious would like to read more side-splitting mummy analogies then please check out my Mummy cigar review here!