I suppose the writing could have been better too, but complaining about that with a film like Silent Night is like bitching about the quality of a cheeseburger at El Chico. If that is what you wanted to eat, then you should have gone elsewhere. 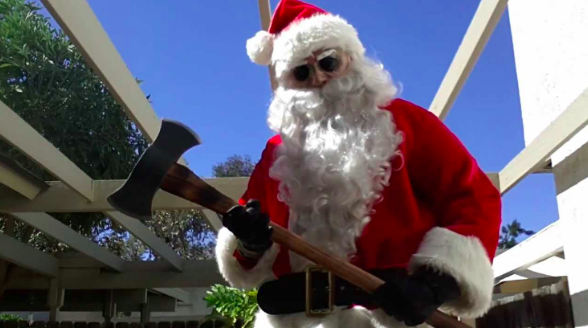 Season’s Greetings, faithful fans of the Tuesday Night Cigar Club! May this holiday season find you all in good cheer. I wholeheartedly understand that many of you aren’t exactly overflowing with enthusiasm at the notion of attacking the shopping malls, adorned as they are with their various tinsels, bells, frosted Tanenbaum limbs and a blonde vixen working as Santa’s ice queen assistant who’s too uppity to have a drink with a total stranger. Fear not, for your favorite neighborhood Doctor has just the right vodka-laced tonic for you: Christmas movies! National Lampoon’s Christmas Vacation? Scrooged? Frosty the Pimp? Good choices all, but since we have been on a run of horror films as of late the selection was obvious: Silent Night.

He Knows Who’s Been Naughty… 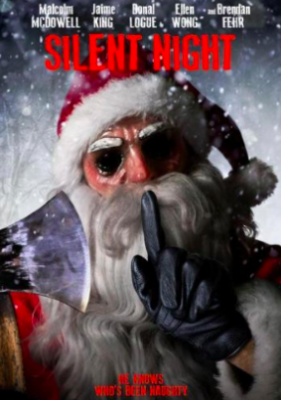 It was extremely tempting to review the 1984 original Silent Night, Deadly Night, or the even better sequel from 1987, but we’ll save those for another day. Podcast material, perhaps? As it turns out, Anchor Bay Films released a pseudo-sequel in 2012 and yours truly bought the Blu Ray in one of my last impulsive moments of DVD purchasing. Speaking of impulse buying, I believe that TNCC chairman Matthew Cade actually owns stock in Anchor Bay Films at this point. If not, he should. When was the last time any of you actually saw a laser disc? Maybe Cade will allow me to display one from his collection if we ever get around to opening The Tuesday Night Cigar Club Wax Museum and Family Fun Park. Who am I kidding, that is obviously far too much work for us to ever even contemplate, much less actually get around to doing. 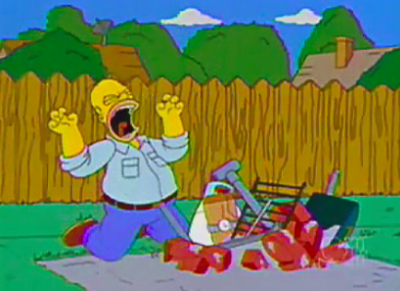 An artist’s rendition of what happened the last time the TNCC attempted concept art.

As the opening credits roll we are treated to a rousing rendition of “Up on the Housetop” while a man we cannot see shaves his chin and clips his fingernails. A young woman clad only in her bra and panties lies bound and gagged on a couch, trying to scream for help. It turns out that she has been committing adultery, the bitch. Santa is punishing the naughty, and how! In the original two films, the killer would say “Naughty!” or “Punish!” before administering his Yuletide justice, usually with a fireman’s axe. Unfortunately – or, now that I think of it, probably fortunately – Santa doesn’t talk in this film, but he does use every available device to hand out his Christmas “gifts.” For example, the cheating harlot’s paramour is tied up in the basement and somehow rigged to the Christmas lights, so why dirty your axe when you can have a nice eye-bursting electrocution? And we’re off and running. The Doctor was almost electrocuted once during the holidays. Let’s just say that you should not drink and attempt to string up Christmas lights, or at least that is what the fire department told me. 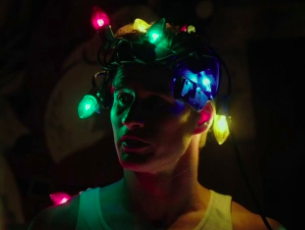 The always lovely Jamie King portrays Deputy Bradimore in the small remote town of Cryer, Wisconsin, a snow-covered winter wonderland that most likely spends the first eleven months of the year waiting for Christmas. In fact, it’s Christmas Eve, and tonight is the big Santa Claus Parade, meaning that there will be scores of men in Santa costumes walking up and down the slushy main drag, a perfect place for a would-be killer dressed as Santa to hide out in. I loved that convenient angle, it was used similarly in Bad Santa 2. King’s character is either divorced or recently widowed – I’m not sure we are ever told which it is – and she is living at home with her kindhearted, loving parents. Malcolm McDowell is the unsympathetic sheriff who makes King work on Christmas Eve. The sheriff’s department is a modernized version of something from Haddonfield or Crystal Lake. With just the sheriff and a couple of deputies we are reminded once again that there isn’t much of a task force for taking down a determined killer.


And is this guy determined! You can wager the contents of your Christmas stocking that a rude, mean-as-mule-piss millennial teenage girl is not going to get away with saying “Fuck Church!” to her overwhelmed mother. That’s being too naughty to survive this movie, and she is going to have a bad encounter with the fireplace poker. Normally you don’t see a thirteen-year-old being killed, but these movies are at their best when they throw out any rules. After all, it is about a mass murderer dressed up as Santa Claus, for God’s sake. The filmmakers know what they are trying to deliver and I appreciate that they don’t pretend to ease up at any point. She was a nasty little cuss, anyhow. 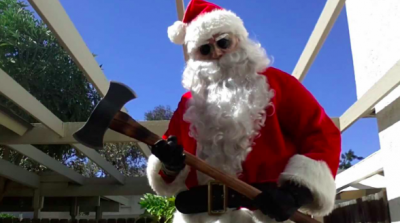 And you thought a sack of coal and oranges made for a bad Christmas. Think again!

Silent Night has a whodunit element involved throughout most of the proceedings, and I am always okay with that. Unfortunately, despite the creative kill scenes, the film has a tendency to get bogged down in between the fireworks. However, we do get treated to a supple pair of boobs, courtesy of a grade-d, softcore-porn photo shoot taking place in a No Tell Motel, the interior of which looks like an America’s Best Value Inn I stayed at once. Now there’s a real horror tale that I’ll save for another time, let’s get back to the film. There are illegal drugs involved, and that combined with the scuzzy skin business means that these amoral souls are not long for the world. Sheesh, Santa, if a failure to be chaste was a crime then the entire Tuesday Night Cigar Club would be sharing a windowless cell in Guantanamo Bay until sometime around 2040. But in this movie, you are either getting the scythe or a date with a wood-chipper. 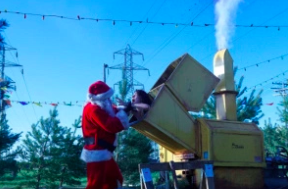 I couldn’t resist. This movie is NOT for the squeamish, but I think you probably knew that already.

The filmmakers attempt to recreate the scene from the 1984 original movie involving the creepy Grandpa who comes out of his catatonia in order to scare the bejeezus out of his grandson, but it falls flat for me. No one can emulate that old guy from the original. 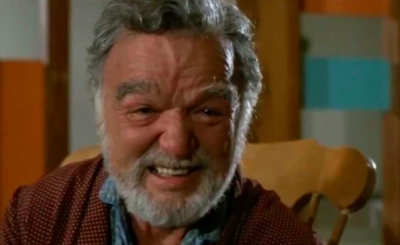 A shout out to Silent Night, Deadly Night from 1984. When you see Santa coming, you better run, boy! You can try to remake that scene, but you’ll fail. This crazy coot was simply one-of-a-kind.

Instead of being scared, the bastard grandson, a twenty-something, long haired goofball in this version, takes money from his vegetable Grandpa’s wallet. You’re being naughty, young man! The only other scene the filmmakers actually attempt to recreate from the original film is the “death by wall antlers” scene featuring the timeless Linnea Quigley. For some reason, this scene is done in slow motion here. Otherwise this is a remake in name only, and I am more than fine with that. Take a theme or a trope and go in a different direction, says I, otherwise there is no point to remaking anything.

Come to think of it, the town of Cryer might really be in need of a murderous Kris Kringle. Even the weirdo, lascivious church preacher is stealing money from the till! For a tiny little burg that lives all year to host a Santa Claus Parade, there sure are a bunch of louse ridden assholes running amok in Cryer. 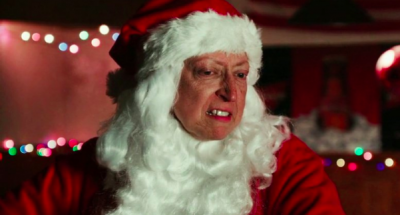 Would you let your kid sit in this guy’s lap?

Questions abound as King and McDowell race against time to try and catch the killer. Is it the drug dealing Santa known as Mr. Snow? Or the slightly off-kilter professional Santa played by an over-the-top Donal Logue? Or even King’s avuncular father? Or will there be some Goddamn twist that I could really do without? Well, you know me and spoilers…

One thing worth mentioning about this film is how good it looks. It really pops out in Blu Ray/HD. In my opinion, there was some fairly good DP work with nice scenery, interesting camera angles and good tracking shots. This wasn’t a cheap effort. It is technically well made and King, McDowell, and Logue all have long resumes and don’t work for free. Having said that, it just lags in some places, and that can be a cardinal sin in a straight-up slasher movie. However, I think they overcome those lags, for the most part. I hate myself for saying this, because Cade and I usually make fun of people who say such things, but at 94 minutes Silent Night is probably 10 minutes too long. Perhaps they could have tightened a few things up to avoid the downtime, but that is picking nits. I suppose the writing could have been better too, but complaining about that with a film like Silent Night is like bitching about the quality of a cheeseburger at El Chico. If that is what you wanted to eat, then you should have gone elsewhere. I usually like Malcolm McDowell, and he isn’t bad here, but one gets the feeling that his heart wasn’t really in it. King is top notch, and The Doctor isn’t just saying that because I find her attractive. She gives the part her all in a nuanced performance. Yes, you can find a nuanced performance in a slasher film. 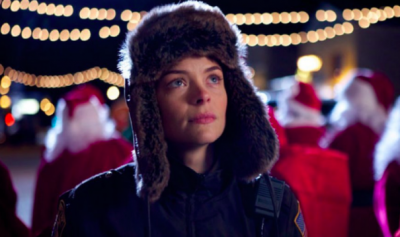 Jamie King as Bradimore in Silent Night. As far as I know, she did not borrow the hat from a Cleveland Browns fan.

So give Silent Night a whirl. If you are pressed for time, I would have to go with Silent Night, Deadly Night 2 from the original series, but… It’s Christmas! You will be off from work and/or school and have plenty of time. When your visiting friends or neighbors become too Godawful to deal with, tell them that you have top-secret research to attend to and then steal away with a flask of brown liquor into a secluded place and watch Silent Night. My humble opinion is that the fun overcomes the faults. Hey, that’s good, I’m going to put that on my dating profile. I’d wish you a clean bill of health, but don’t go away yet! One final note for all you would-be headbangers out there. 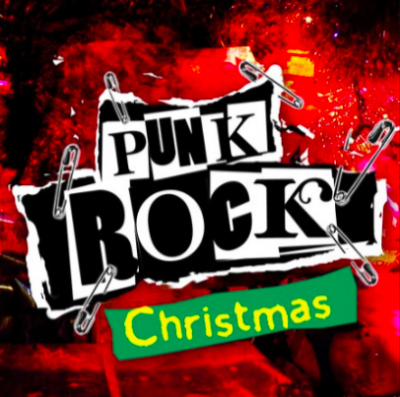 As an unabashed fan of hardcore punk rock (I think some are calling this variant PsychoBilly these days, but I don’t care for labels) I must recommend sticking around for the end credits so that you can hear the song “Silent Night, Deadly Night” by a band named White Coffin Terror. Because it totally fucking rocks. The only other time The Doctor can remember abandoning all pretense and banging my head against the wall during an end-credits song was after the disappointing Hatchet 2 (I still love you, Danielle Harris) when I was treated to a punk dirge called “Old School” by Overkill. Anyway, if you are slightly twisted – and if you listen to the TNCC, then you probably are – this song will be playing when you are knocking back the egg nog. As always, The Doctor sincerely wishes you all a clean bill of health and a very happy new year.
Tags
Christmasfilm reviewhorrorSilent Night
Categories
Beyond The Pod
SHARE THIS ARTICLE
OLDER ARTICLE