The very reason that people will pay to see a Broken Lizard film is because these specific actors are funny, good at what they do, and utterly devoid of shame. In other words, they're personal heroes of The Doctor... 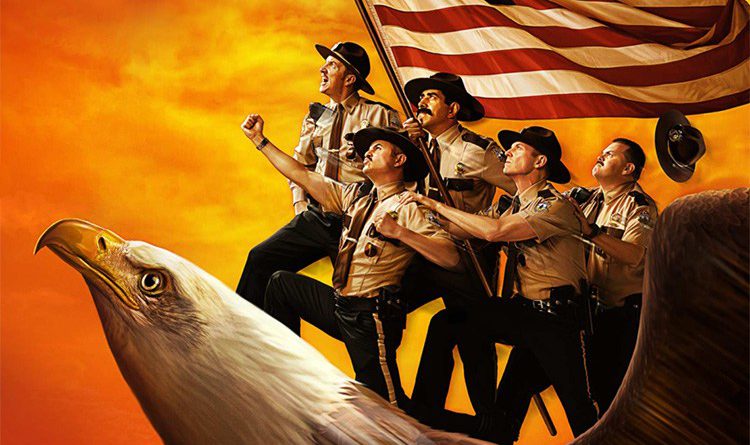 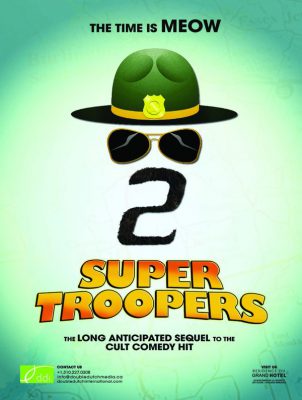 In his unforgettable performance as The Joker in Tim Burton’s Batman, Jack Nicholson asked “Haven’t you people ever heard of the healing power of laughter?” The Doctor certainly has, and I celebrate this healing power every day. In fact, I possess a lifelong affinity for what the sober and the mirthless might refer to as “lowbrow” humor. But the hell with those people, am I right? I must offer my sincere apologies, friends of the TNCC, for once again I have digressed…

The Broken Lizard gang has returned to the silver screen with the long-anticipated sequel Super Troopers 2. The Doctor has been a fan of the comedic antics of Broken Lizard for many a year – after all, they provided the world with Beerfest – and thus the release of Super Troopers 2 was on my admittedly oft-misguided radar. Past experiences enjoying the Broken Lizard oeuvre would have served as reason alone for making a trip to the cinema, but after reading a negative review by some hackneyed hipster that was reprinted in the local circular (more on this later), I was even more amped up, so I dropped several Absolut minis into the pockets of my lab coat and embarked for the 5:20 matinee. 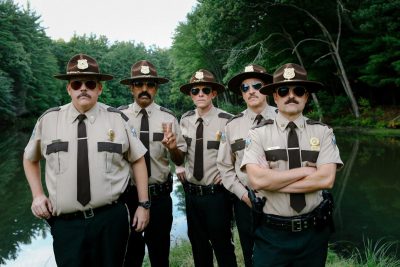 When the curtain rises on ST2, our former members of the Vermont Highway Patrol (and subsequently the Spurbury Police Department) are now employed in jobs other than law enforcement, while Captain O’Hagan (Brian Cox) appears to be enjoying a hunting and fishing retirement. How did this occupational change come to pass? Apparently a “ride along” incident with actor Fred Savage resulted in an unmitigated disaster, but the details of said incident are not immediately forthcoming…

The gang is called together for a clandestine meeting with the Governor (the still lovely Lynda Carter.) It turns out that part of the U.S.-Canada border was originally mapped out incorrectly and as a result a small pocket of largely French-speaking Canada is about to be incorporated into Vermont. The need is thusly established for experienced lawmen to once again take up positions in the Vermont Highway Patrol in order to help ensure a smooth transition… of course, nothing about this transition is going to be smooth, especially when the Vermont gang immediately runs afoul of a trio of disgruntled and uncooperative Canadian Mounties. Adding laughter to the proceedings is none other than Rob Lowe as Guy LeFranc, the mayor of the small Canadian town that is about to be consumed by Vermont. He is also a bordello owner that caters to all appetites. Lowe only appears in a few scenes, but in my medical opinion he crushes every one of them. 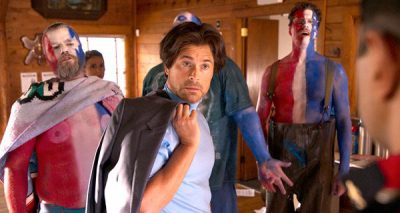 A large stash of contraband including baggies of narcotics are discovered and now ST2 has supplied us with a mystery to go along with the hijinks. Why employ the use of a drug lab when you can just divide up the different pills amongst yourselves and see what the various side effects are? DOCTOR’S NOTE: This should only be employed in a controlled laboratory environment under the supervision of trained medical professionals, all of whom should preferably be someone other than myself.

And… there really isn’t much more to discuss in terms of the film’s plot, and in no way do I mean to infer anything negative with such a statement. However, I would be remiss if I did not mention the gorgeous Emmanuelle Chriqui is involved as Genevieve Aubois, the only Canadian who might be sympathetic to the aims of our boys in the highway patrol. 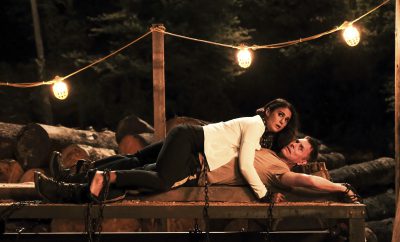 Emmanulle Chriqui, chained to Rabbit (Erik Stolhanske) in a scene from Super Troopers 2. Stolhanske, you lucky son of a bitch…

Super Troopers 2 is not just a worthy sequel, it is also a film that is perfectly representative of the Broken Lizard guys and their brand of humor. Hanging out with these guys is fun, and that brings me back to the aforementioned review of Super Troopers 2 that I fell across. I will not mention the writer or his newspaper affiliation by name – in truth I have already forgotten them both, although I believe it originated in San Francisco – because I am not interested in starting a feud but I had multiple problems with the review and, by extension, the humorless dolt who wrote it. Any contention that the Broken Lizard troupe, all in their late forties while making Super Troopers 2, are somehow too old to engage in comedy of this nature is pointless and nonsensical. That the character’s ages and lack of relative maturity somehow forms a negative construct in terms of the movie’s overall value is pure horseshit. The hipster moron who wrote the review actually asserts that one of the problems with ST2 is the failure of the characters to evolve. What? I mean…what?!!? Are they supposed to do Shakespeare because they are now pushing fifty? The very reason that people will pay to see a Broken Lizard film is because these specific actors are funny, good at what they do, and utterly devoid of shame. In other words, they’re personal heroes of The Doctor. The writer then goes on to actually complement the humor of the film and the performance of Lowe. He essentially praised the actual content of the movie while panning it for reasons that simply do not hold water. I give up. To steal a line from TNCC chairman Matthew Cade from his classic response to his college newspaper’s movie critic for being an asshole, “the balcony is closed”. 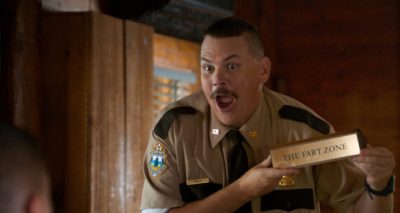 I’ve simmered down from my rantings. Whenever you feel the need do to the same, The Doctor recommends thinking thoughts of Farva (Kevin Heffernan)

Does one need to be a die-hard fan of the original Super Troopers in order to enjoy its sequel? I would say no; while there are nods to the original, they are few and far between and none of them really comes off as an inside or private joke. I actually liked Super Troopers 2 better than the original, if only because these guys have more films under their respective belts than they did in 2001 and the boundaries of how far you can push the envelope with comedy have expanded exponentially since then. One doesn’t have to have viewed Beerfest ten times either, but if (like me) you have, you will not be disappointed. And if you are a snob who compares everything he or she sees to Gosford Park, well then… I feel sorry for you, because your life sucks.

If your life doesn’t suck and you enjoy no-holds barred humor, then make plans for a viewing of Super Troopers 2. Jay Chandrasekhar, Kevin Heffernan, Steve Lemme, Paul Soter, and Erik Stolhankse deliver the goods once again and let’s all hope that they continue to do so for a long time to come. As always, my friends, The Doctor wishes you all a clean bill of health.