The Meg is an end of summer thrill ride, well worth the price of admission. Perhaps it is a SyFy movie in spirit, but it’s one with a much larger budget and better actors (apologies to William Zabka and Billy Drago, I obviously didn’t mean you guys)... 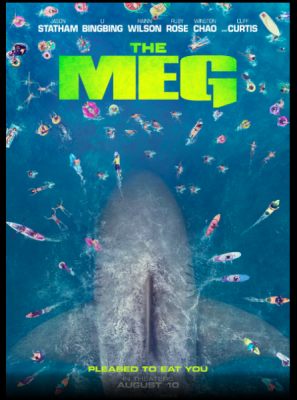 I don’t want to be accused of laziness – I am lazy, I just don’t like being accused of it – but does The Doctor’s review of The Meg really require an introduction? A movie about a giant prehistoric shark where the main protagonist is none other than world renowned asskicker Jason Statham? Stop, just stop it right there. Tuesday Night Cigar Club chairman Matthew Cade and I had been anticipating the release of The Meg for months like kiddies at Christmas. With the new school year starting up, the timing was perfect for The Doctor to sequester a few airplane minis of Maker’s Mark bourbon on my person and attend the 4:50 pm show on a recent Wednesday afternoon. And look at that, I have written an introduction after all! Apparently, the only thing to triumph over my inherent laziness is my propensity for being longwinded. Butter your popping corn and lace your Sprite and follow the Doctor to the movies like the Pied Piper of Hamlin. Leave the rats at home, we’ll deal with them later.

Jason Statham is Jonas Taylor, the leader of a Navy deep sea rescue team which is exactly the type of badass, testosterone-filled job that you would expect Jason Statham to have. Taylor’s crew is attacked by an unknown entity while attempting to rescue injured divers from a damaged submarine near the ocean floor. He is forced to abandon two of his friends, consigning them to Davy Jones Locker. Even though Taylor’s actions saved the lives of eleven people, he is inexplicably branded a coward and loses his wife and his job in the process. Shit, talk about a rough day at work. Taylor’s assertion that his crew was attacked by a beast of unimaginable size in the watery depths fails to help his cause or his credibility. 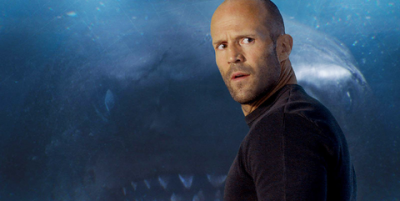 Jason Statham as Jonas Taylor in “The Meg”. That shark better watch his ass if he doesn’t want to get hurt.

The storyline jumps ahead five years later to a research station located 200 miles off the coast of China where we meet the rest of our players including the station’s main administrator Mac (Cliff Curtis) and Dr. Heller (Robert Taylor of TV’s Longmire) as the medical officer who helped get Jonas drummed out of the Navy. Also adding kicks to the proceedings is Rainn Wilson as Jack Morris, the sneaker-wearing, entrepreneur billionaire who has funded the station’s construction and groundbreaking underwater research. Wilson obviously became known for his memorable performance as Dwight Shrute on The Office but he is far from a one-trick pony. In The Doctor’s expert opinion, Wilson is a talented actor with a wide-reaching range that is on full display in The Meg. 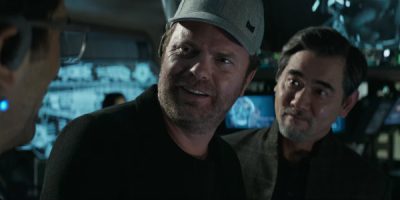 Rainn Wilson of “The Office” fame as billionaire Jack Morris. Bringing just the right amount of charm and smarminess (charmimess?) to the role, Wilson is a welcome addition.

A deep sea submarine piloted by Jonas Taylor’s ex-wife is attempting to penetrate beneath the viscous fog at the bottom of the Mariana Trench not far from where Jonas himself lost his honor and career. For those not in the know, the Mariana Trench is a giant crevasse at the bottom of the Pacific Ocean near Southeast Asia. The trench is shaped roughly like a crescent moon and is over 1000 miles long with unknown depths. A scientific theory posited about the Mariana Trench – and integral to the plot of The Meg – is that the “fog” serves as a barrier between the uninhabitable freezing waters of the ocean’s floor and the warmer waters that lie beneath. This scientific phenomenon provides for an entirely undiscovered ecosystem filled with a wealth of marine life of varying size and age. I’ll have to take their word for it as marine biology is not my field of expertise. While exploring this heretofore unknown world, the sub is attacked and severely damaged by an unseen entity. A pattern exists, no? Something is down there alright and who will Morris and his clearly overwhelmed staff of science nerds turn to for help? You guessed it…

Only maybe Jonas Taylor doesn’t want to help, because now he has a comfortable-if-shady job repairing boat engines (or something like that) while spending most of his hours draining beers and taking naps in a bar with a thatched roof somewhere on a wharf in Thailand. I have always loved this angle of the fallen hero who no longer gives a rat’s ass and has taken to drink and squalid living. The penultimate example would be the 1993 film Striking Distance where the one and only Bruce Willis plays Detective Tom Hardy, an ostracized river cop in Pittsburgh who lives on a small houseboat and battles his daily hangover by microwaving a wet dishrag for the purposes of massaging his face with it (Anybody ever try that? Does it work? You can reach me via the TNCC website). Although, if you want to see the fallen hero encapsulated in one quick scene, it would probably be the introduction of Mel Gibson as Martin Riggs in the first Lethal Weapon when he gets out of bed in the morning, lights a fresh cigarette from the dying embers of the one already in his mouth, and drinks a bottle of Coors for breakfast. Jonas Taylor isn’t quite that far gone in The Meg, but he appears to be gleefully on his way. It’s worth mentioning that all of these guys are far too physically fit to be the alcoholic, burned out husks as they are written, but that is just picking nits.

Taylor heads out to the research station to rescue the downed submariners. In the process, he is finally able to prove his point to the asshole Heller that something extremely dangerous lies beneath. The real danger – other than the shark – is Morris, who sees dollar signs dancing in front of his greedy eyeballs at the prospect of catching and displaying a megalodon. And isn’t that a staple of any good creature feature? Just like the businessman in the upcoming TNCC show about Shark Attack 3: Megalodon and scores of other films, there is always some jerkoff magnate or local politico who is unwilling to heed the imminent warning signs at the risk of ruination and multiple deaths… and who says movies aren’t grounded in reality? Not I, said The Doc.

No problem here, we just need a fish tank the size of Nebraska to keep him in. I’m usually up for harebrained schemes in the name of science, but you can Fucking-A count The Doctor out of this one!

As always with films of this nature, the question is begged: What of the shark itself? The fact that we are almost thirty minutes into the film before we see the shark only bothered me a little, although this is usually a pet peeve of mine. I guess this is a complement to the performances, most notably Statham’s. The TNCC had a recent discussion about CGI and its various merits or lack thereof. The opinion of The Doctor is that there is no such thing as good CGI. Rather, CGI falls into one of two categories: the abysmally bad in the first category and everything else in the second. It pleases me to say that the CGI in The Meg is not in the first category. And, truth be told, it is in the upper echelon of the second category but it resides there just the same. I’m not kvetching; it is supposed to be a seventy-foot long shark that is roughly the size of an airplane. They did the best that they could, and it works for me in the overall context of the film. So long as CGI does not fall into the category of the heinously terrible, I can live with it. After all, these things take a leap of faith before you can even buy a ticket and I bought my metaphorical ticket to creature features a long time ago. Caveat emptor. That means “buyer beware.” Oh, you knew that already? Well, no one likes a smart ass! Sorry, the Maker’s Mark appears to be taking hold. It’s following like a phosphorescent Ghost Rider on the heels of the nitrous oxide I was given at my dentist appointment this afternoon. Let’s wrap this up, shall we?

The Meg is an end of summer thrill ride, well worth the price of admission. Perhaps it is a SyFy movie in spirit, but it’s one with a much larger budget and better actors (apologies to William Zabka and Billy Drago, I obviously didn’t mean you guys). The Meg is a big screen movie but, having said that, I doubt much would be lost in translation on today’s television sets. I recommend seeing The Meg at your earliest convenience and try not to think too much about what is going on below you the next time you hit the beach. As always, good friends, The Doctor wishes you all a clean bill of health.