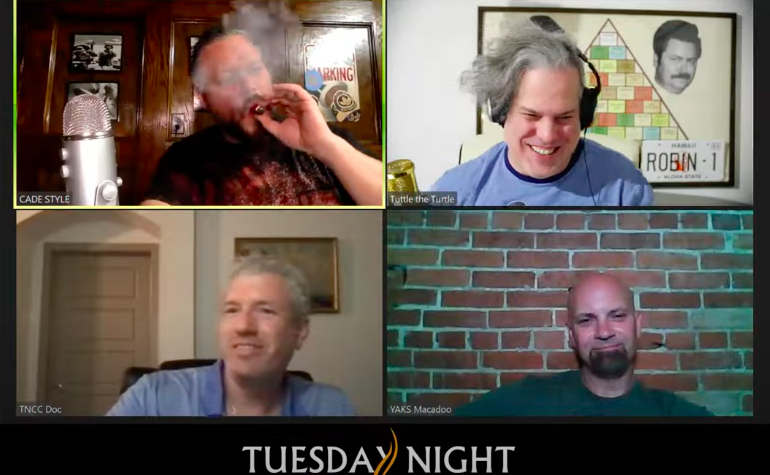 Tut had some major problems with the unique sci-fi western that I selected for our last episode, so I thought I would make him happy tonight by picking something brand spanking new to watch and discuss. But, as you’ll soon learn, some folks just can’t be pleased. At least we had a wonderful cigar and some delicious, powerhouse beers so 2 out of 3 ain’t too shabby!

Size: 6 1/2 x 54
Wrapper: Ecuador (Habano Oscuro)
Binder: Ecuador (Sumatra)
Filler: Dominican Republic & Nicaragua
Price: $12.75 (and please remember when purchasing some fine Drew Estate cigars or other brands from FamousSmokeShop.com to use your new favorite promo code TNCC20 at checkout where it will knock $20 off your purchase of $100 or more) 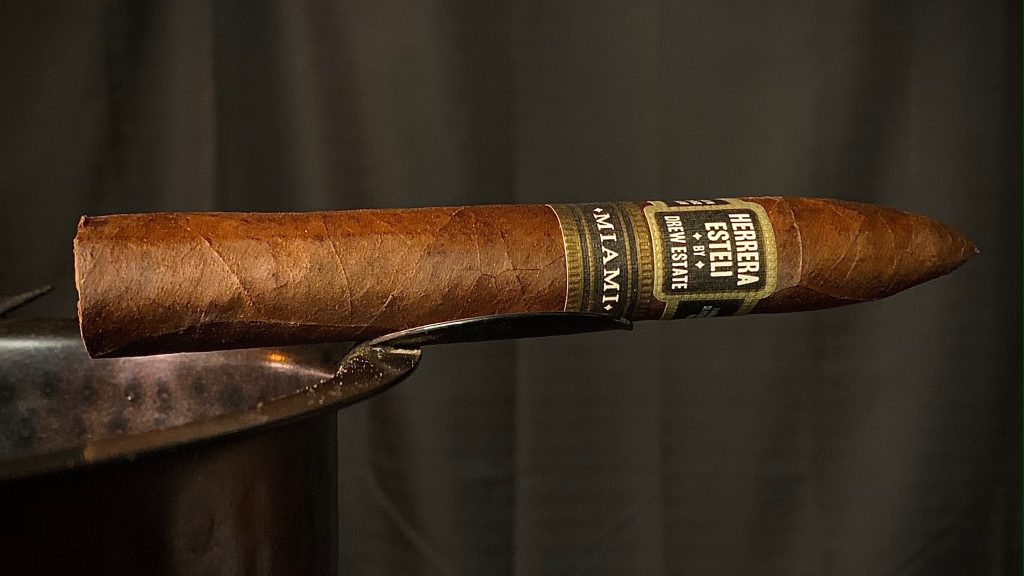 The lavish Ecuadorian Habano Oscuro wrapper unleashes a very nice, gloriously rich cedar aroma once the cello is slid off and the cold draw reveals some fig-like sweetness. Upon ignition there’s a medium-strength spice through the nose and that cedar that was alluded to earlier comes through loud and proud on the draw. It’s a beautiful, pronounced cedar that deserves to stand alone on the main stage. 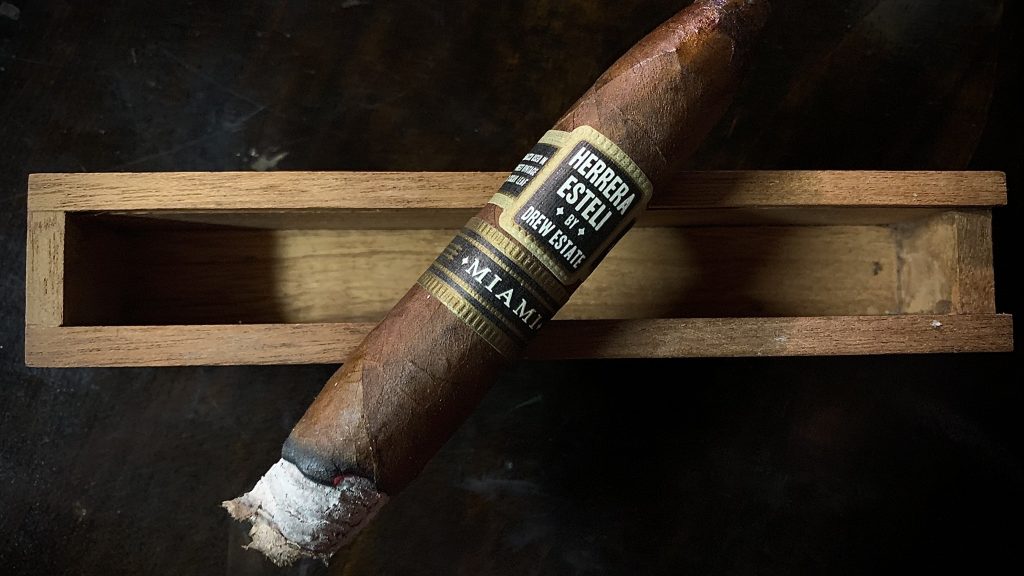 Tut and Yak Boy also picked up on a very subtle toasted marshmallow note on the retrohale in the first half but, quite sadly, I was unable to detect it. Dammit. Smores flavor in a cigar? It’s master blender Willy Herrera’s Wonderland and we’re all just thankfully living in it! He’s the hardest working master blending mofo in the business and we are constantly in awe of his mad skills… 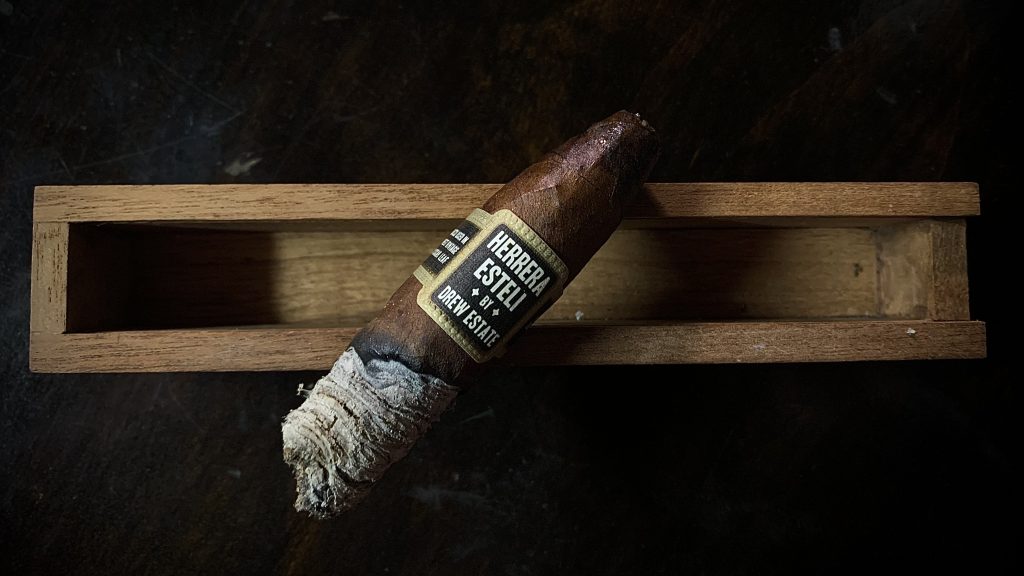 In the second half, a leather flavor joins the warm spice via the retrohale and it’s still all cedar all day long on the draw. While Yaks and Tut continued to get hints of that sought after sweetness, the toasted marshmallow, I regrettably never picked up on it. What this cigar lacks in complexity or transitions, it more than makes up for in high quality, well pronounced flavors. The long-lasting finish on the Herrera Estelí Miami is both impressive and memorable. This is a consistent cigar from start to finish and we easily awarded it THREE THUMBS UP! 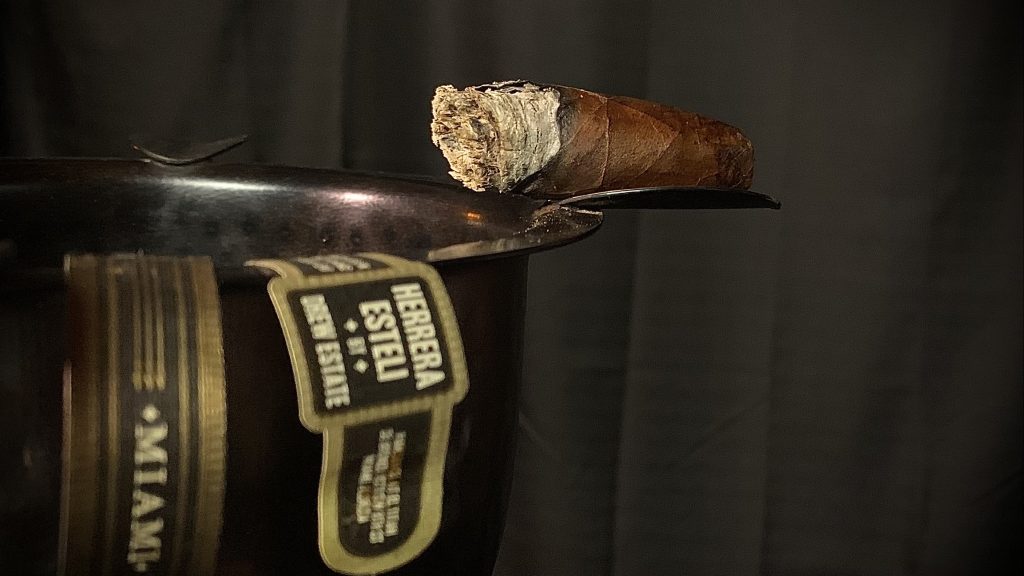 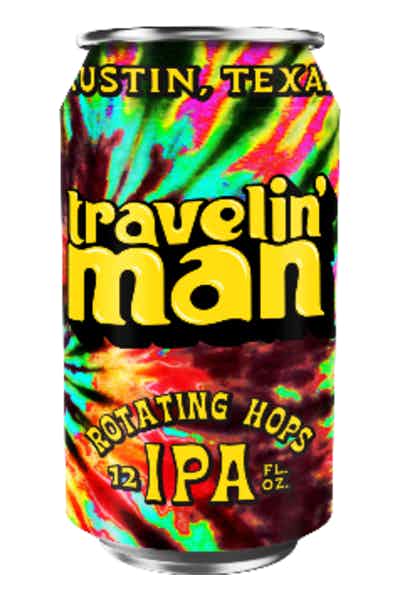 This 6.4% ABV, medium range IBU beer is a lighter, New England style IPA. With very little bitterness, non-IPA drinker Tut found this beer to be a little too harmless to bring anything interesting to his cigar tonight. He wanted more malts or more bitterness, more something!, to aid his cigar along the path this evening and the Travelin’ Man wasn’t it. But the movie we discuss does have a traveling man in it so all was not lost.
TUT’s PAIRING GRADE = C-

This fucking 11.7% powerhouse has malts out of the wazoo and that maltiness really brings out the underlying sweetness in tonight’s cigar. The malts and bold hop characteristics in particular really help tonight’s cigar shine to its full potential. Lagunitas advertises this beer as having 100+ IBUs and I’d actually put that number closer to 77 tops BUT that’s not a bad thing! This IPA is delicious and a dream as far as cigar pairings go…
CADE’S PAIRING GRADE = A 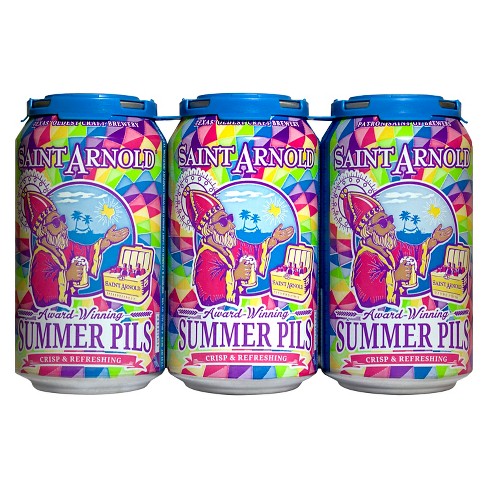 Doc really enjoyed this fresh, crisp 4.9% summer beer and he could clearly imagine himself chugging a bunch of these out on his beloved golf course. The 20 IBUs were negligent but The Doctor’s appreciation for this beer was not. The Summer Pils can is very brightly colored and tonight’s film features some bold, vibrant color schemes as well but… c’mon Doc… you can do better than this.
THE DOCTOR’S PAIRING GRADE = D 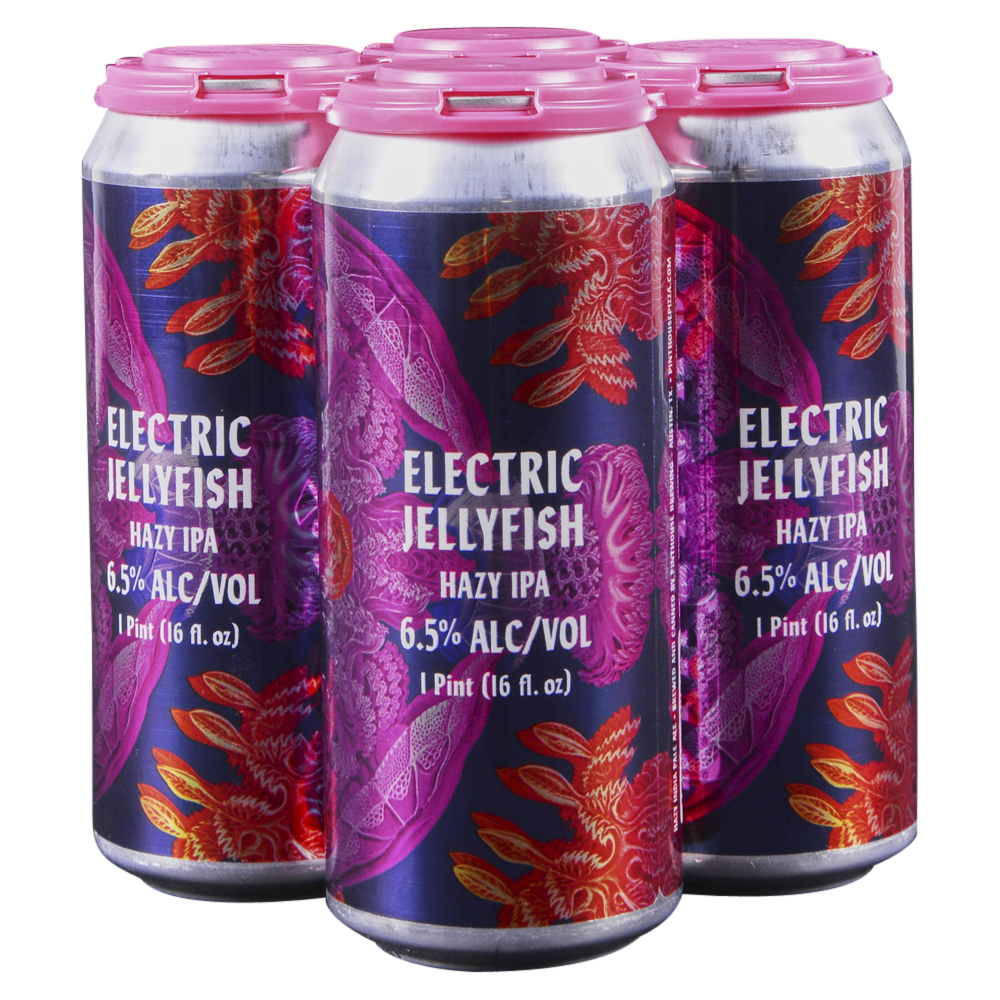 This 6.5% ABV hazy IPA with the quirky name is straight outta quirky Austin, TX and Yak Boy loved it. While tonight’s film has many electric animatronic creatures in it, there’s no electric jellyfish so the only thing that Yaks accomplished with this cloudy, light beer pairing is that he made The Doctor’s beer selection look a little less terrible pairing-wise. He said it went “really well” with his cigar but whatever…
YAK BOY’S PAIRING GRADE = D- 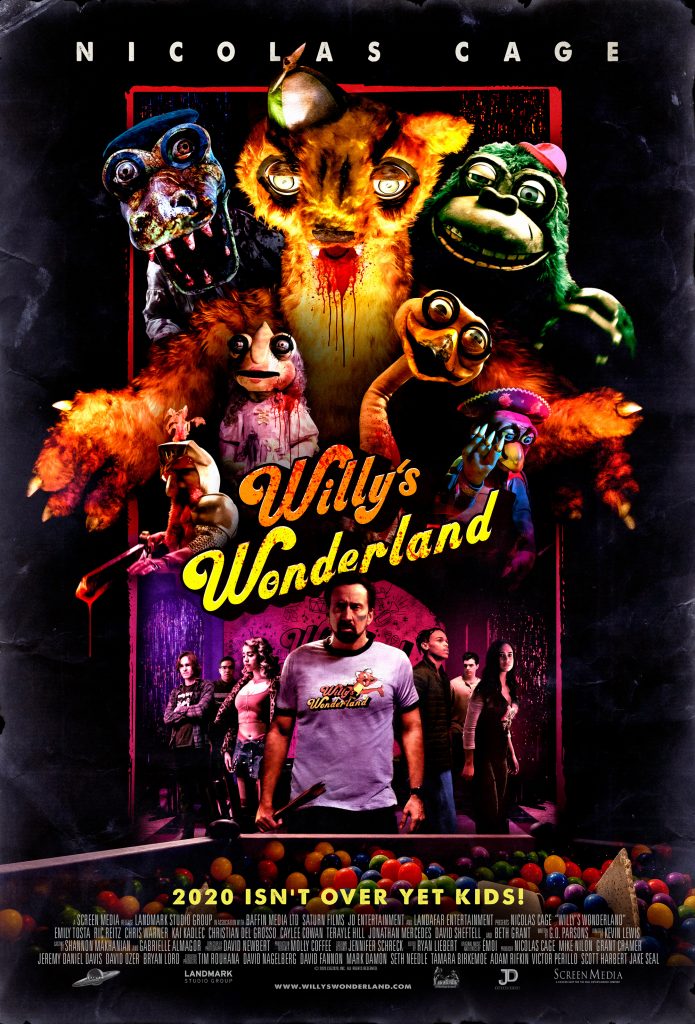 The poster doesn’t lie, much like the year 2020 this movie should be forgotten as soon as possible…

Willy’s Wonderland is written by G.O. Parsons and it’s directed by a dude named Kevin Lewis who has helmed a few things prior to tonight’s movie but the only one I’ve seen is 2003’s Malibu Spring Break which, as you can probably guess by the title, I was drinking heavily while watching that film so I don’t remember anything about it… 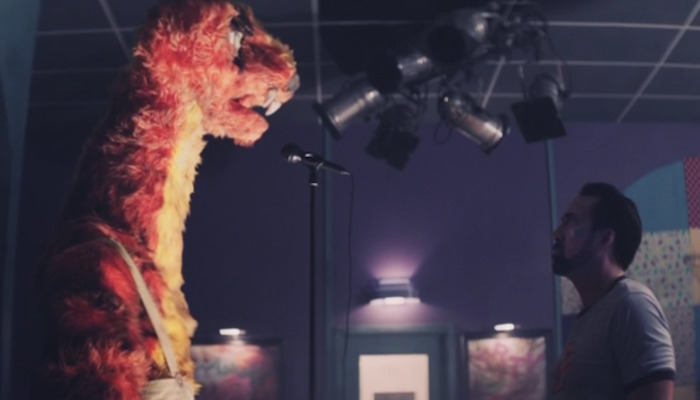 Our very own Yak Boy has a brilliant theory as far as Nicolas Cage’s character in Willy’s Wonderland, because we get nothing as far as backstory or motivation for his “Janitor” character whatsoever in the actual film. It’s as if Cage’s character from Mandy climbed in a muscle car at the conclusion of that movie and just ended up at Willy’s Wonderland fun center. He shrugs, he’s obviously dealt with a lot weirder shit than he’s presented with here, and then Cage silently slaughters an entire pizzeria filled with homicidal fuzzy animatronic characters without delivering so much as a catchy one-liner. He’s seen worse, he’s seen EVERYTHING in that much better film, this is just another stop for him on the bizarre journey that is his life. So if you choose to watch Willy’s Wonderland, perhaps go in to it with this mindset because the actual screenplay is total nonsensical horseshit. 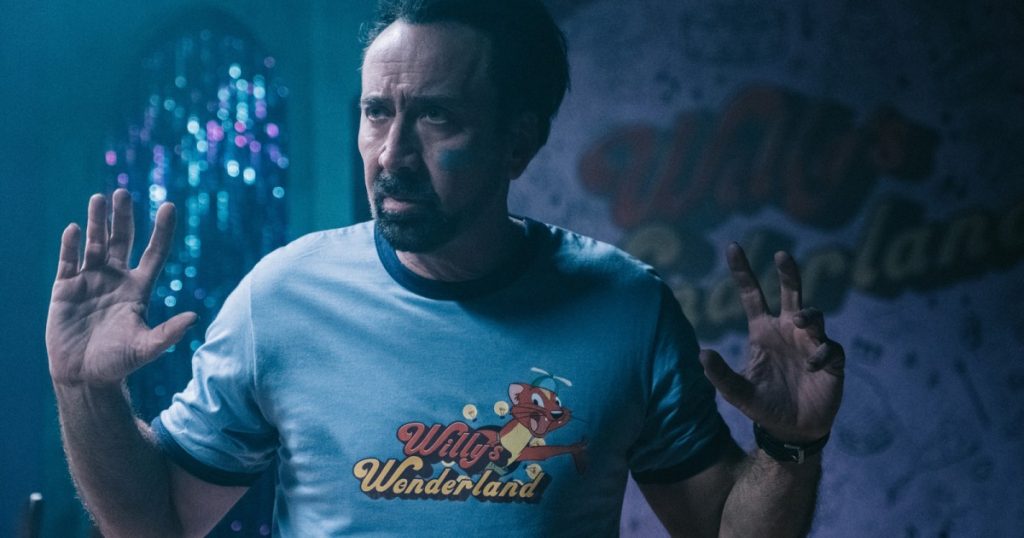 At a certain point as an audience member, very early on, you just want to raise your hands and give up…

So do you to want to know how we REALLY felt about this movie? Well click the links below NOW!!! 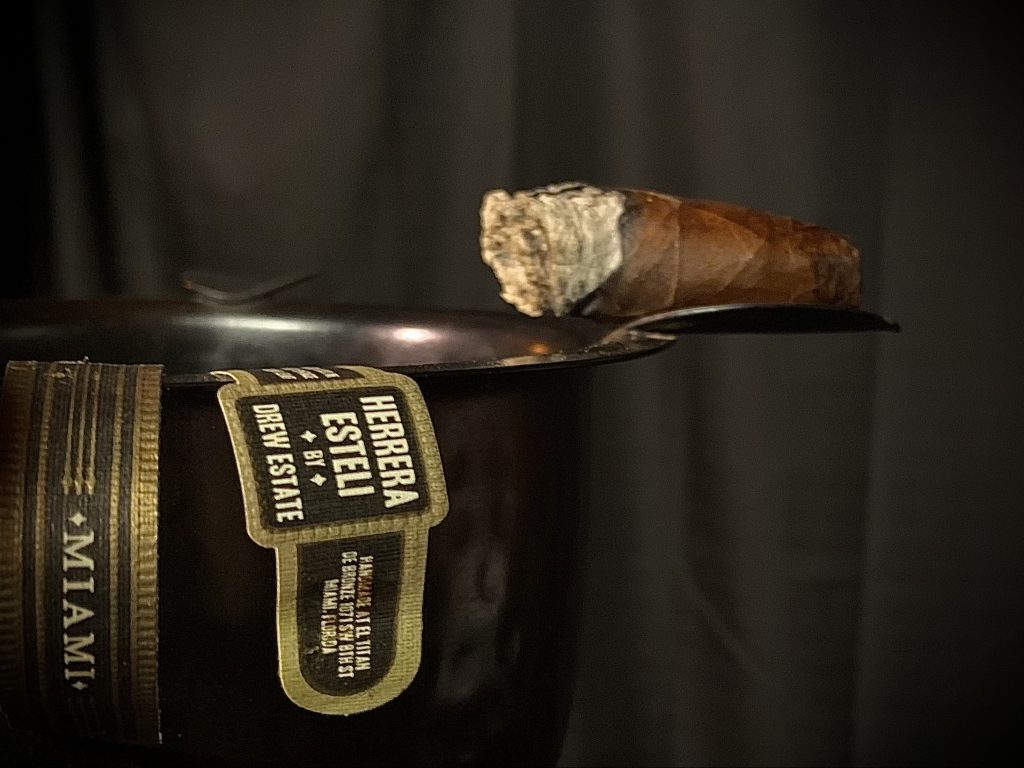 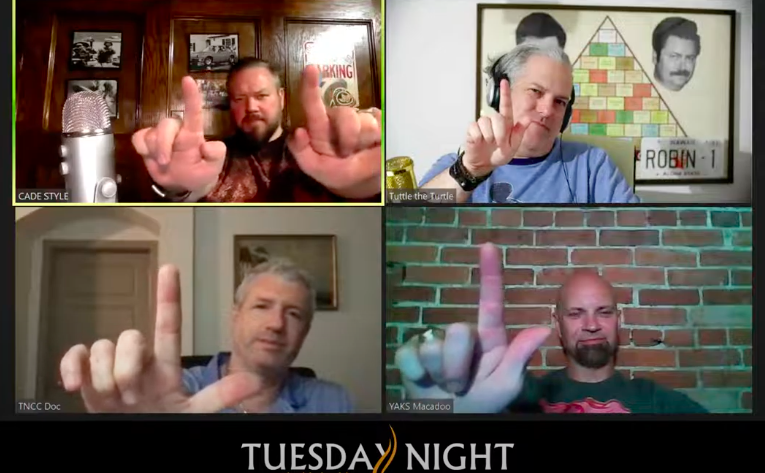