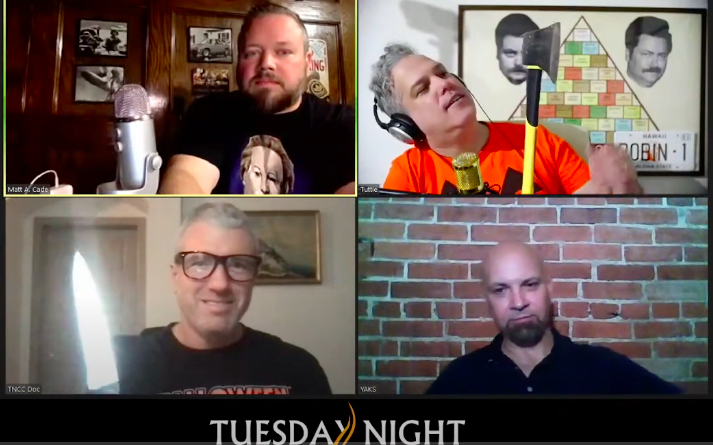 The Night They Came Home… to get drunk

Welcome everyone to The Tuesday Night Cigar Club Episode 148! Tonight our “7th Annual Spooktastic & Booriffic Drunken March To Halloween” sadly comes to end BUT we conclude things in epic fashion with our spin on the latest Halloween movie and we have a blast doing it. It’s all treats and no tricks, so click the links at the bottom of the page and join the party! HAPPY HALLOWEEN!!! 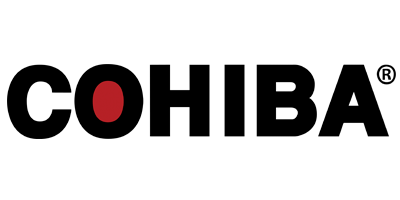 Size: 6 x 54 (toro)
Wrapper: Nicaragua (corojo)
Binder: Nicaragua
Filler: Nicaragua (Jalapa & Estelí), Dominican Republic (piloto cubano)
Price: $29.99 (And please remember when purchasing some Cohiba cigars ~ these were submitted to us for review ~ or other fine premium stogies from FamousSmokeShop.com to use your new favorite promo code TNCC20 at checkout where it will knock $20 off your purchase of $100 or more) 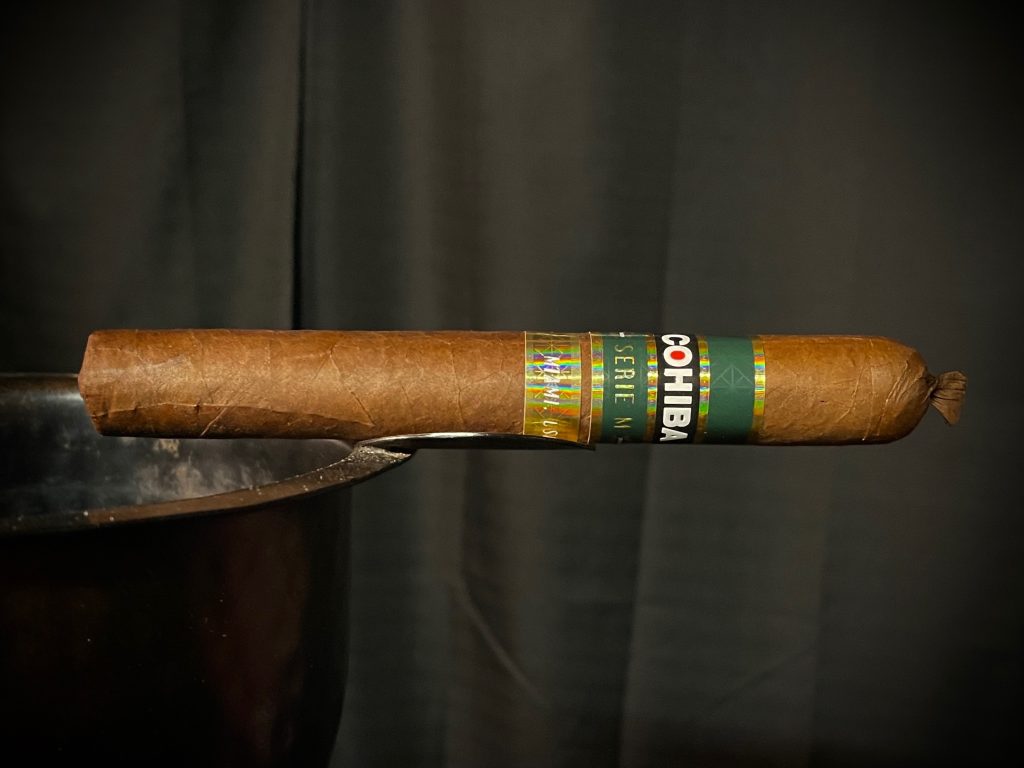 We have reviewed two Cohibas previously on the podcast, the Spectre and the Cohiba Royale, and nothing about either of those blew our socks off other than their lofty price tags. But there’s something different about tonight’s cigar, the Serie M, it is the first Cohiba to be rolled right here in the United States! And General Cigar Company chose Miami’s legendary El Titan de Bronze on Calle Ocho for the honor of bringing this blend to life. So the M is for Miami… or Michael Myers for the pairing purposes of our show this evening. 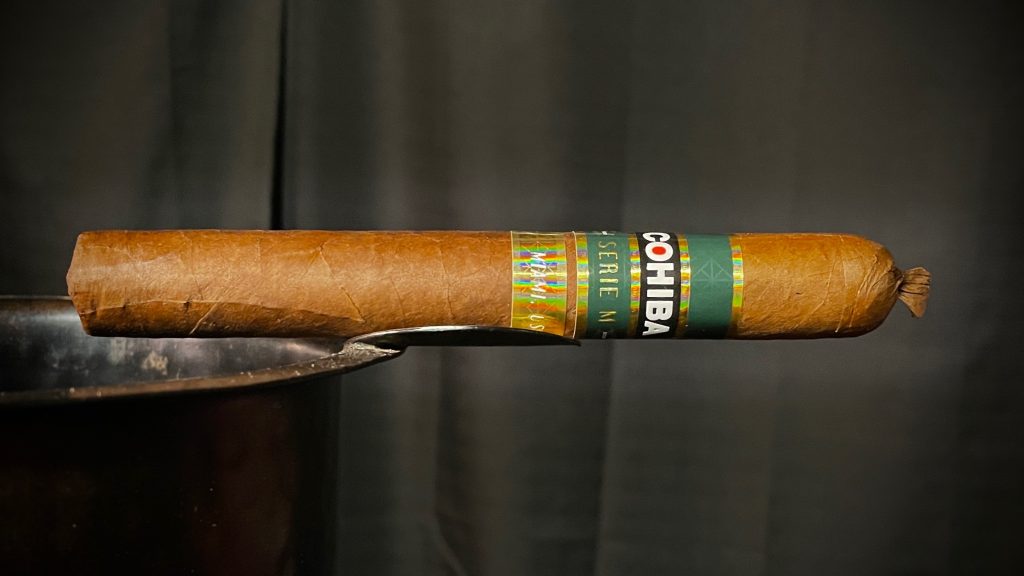 The Cohiba Serie M features a smooth, leathery, light brown wrapper accented by a very eye-grabbing gold and green band color combination. The fishtail cap and closed foot add yet another dash of visual pizazz. Fun Fact: it took me 148 episodes to finally use the word pizazz. When you slide the cigar out of the cello, the aroma of cedar is highly prevalent which makes sense as there is a thin sliver of cedar included in the cello to support the cigar and, I’m assuming, to help keep the delicate cap from breaking off. There is also a faint hint of green tea present but the cedar aroma rules the day. Upon ignition there’s an immediate bold nose-tingling spice through the nose that damn near brought a tear to my eye. And, no, I wasn’t getting overly emotional about the smoking experience this early on, my eyes literally began to tear up. A breadiness joined by some woodsy, mild cedar present themselves on the draw as soon as we became acclimated to the potent spice overwhelming us upstairs. The smoke profile is beautiful as the thick grey smoke travels lazily up the body of the cigar from the foot to the head and then spiraling up in to the ether… 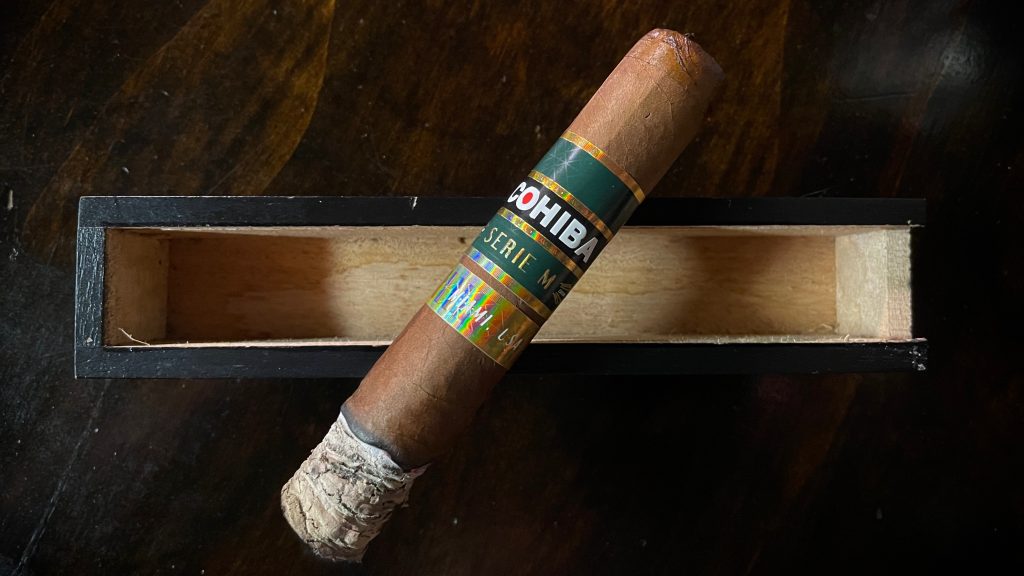 Construction remains stellar in the second half all around with a smooth draw and respectable burn line. A semi-sweet raisin note joins the potent, steady spice on the retrohale. A Nicaraguan mineral note swoops in during the final third on the draw and it’s a nice addition to the overall profile, especially when that nose spice kicks up a notch towards the very end of the smoking experience. 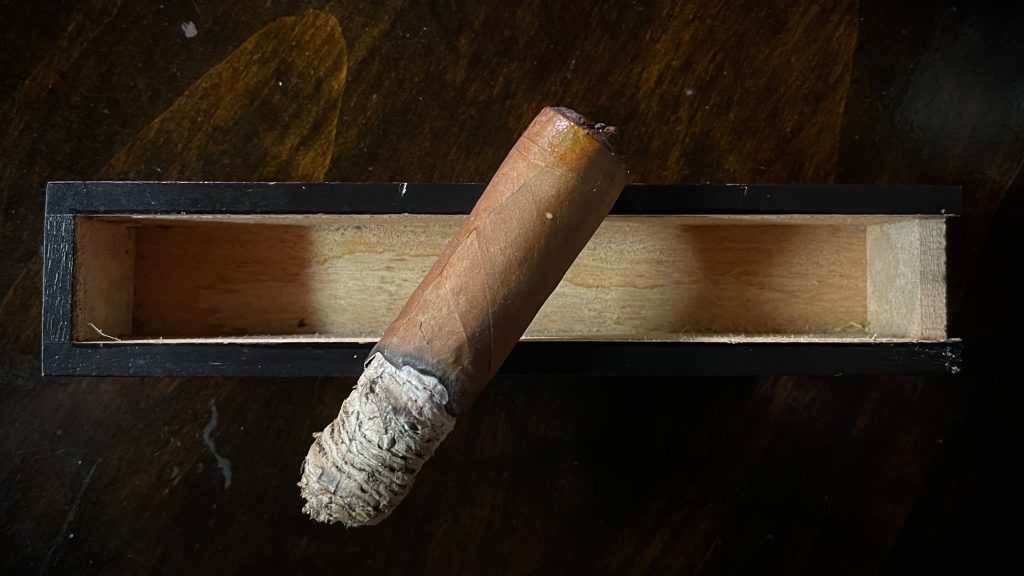 The Cohiba Serie M is a slow burning, exceptionally constructed cigar. It’s not overly complex and the transitions are mostly subtle so you really must pay close attention to pick up on a lot of the subtleties but the payoff is a pleasant cigar that pairs well with a plethora of craft beers of varying styles which is always admirable. So if all of this sounds like the Cohiba Serie M might just be in your wheelhouse, and you have $30 to spend on a single cigar (we don’t so fortunately General Cigar submitted these to us for review), pick one up from your local tobacconist and let us know what you think! 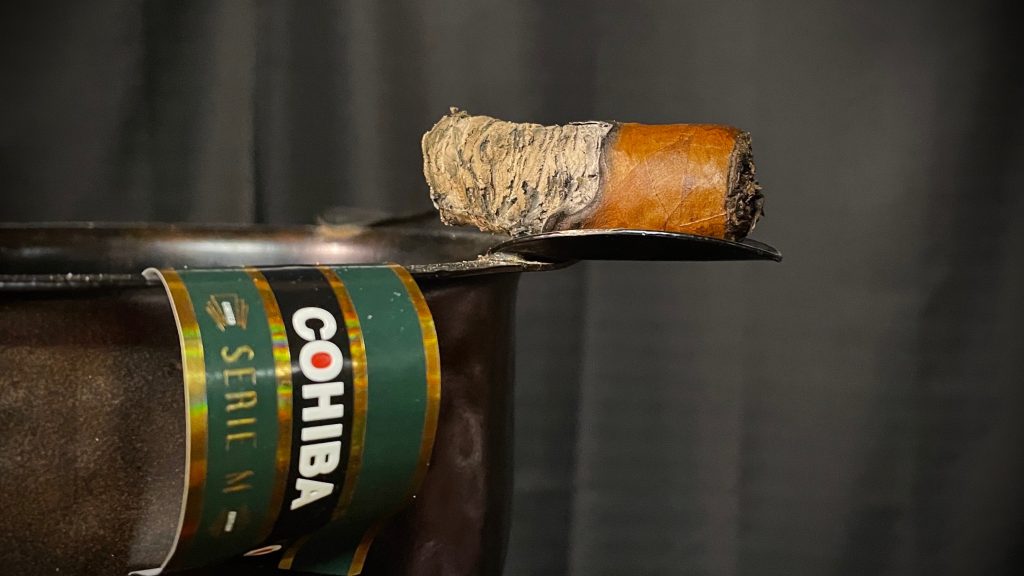 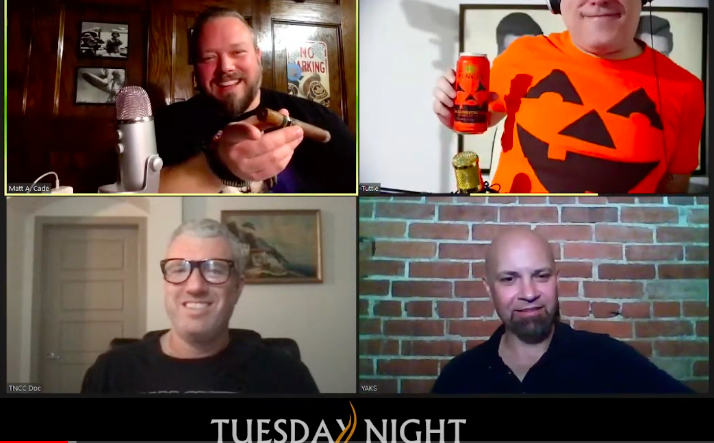 But tonight, tonight my boys all did a damn fine job of securing some damn fine pairing beers. Don’t tell them this but I’m one proud podcast host right now and I’ve never said that before, like seriously I’ve NEVER said that before now! 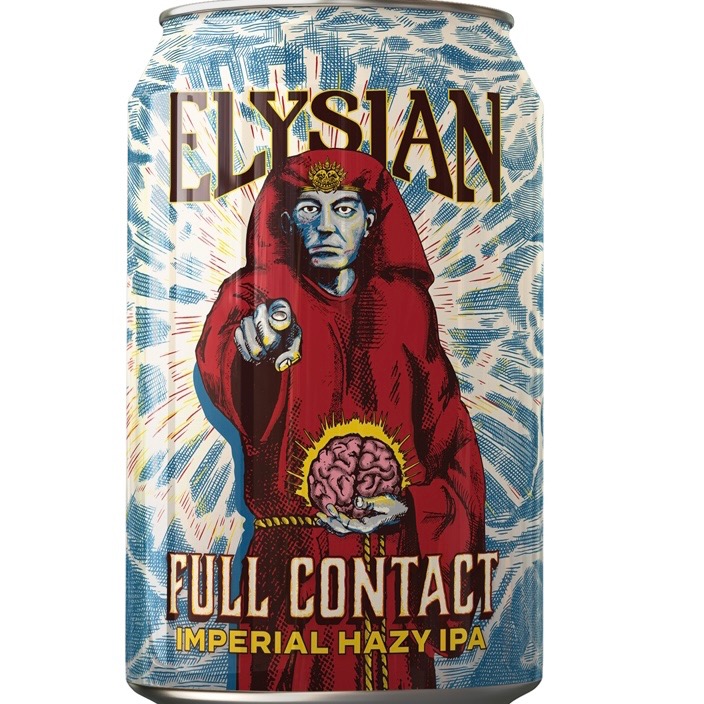 Coming in hard at 8.8% ABV and 60 IBUs, this tasty imperial IPA features a subdued maltiness but it has a really crisp hop bitterness and the end result of this combination is a very smooth, hop forward beer that paired well with my cigar. I chose the Full Contact because Michael Myers does indeed go FULL CONTACT in tonight’s film! His training pads are off and it’s Go Time as he kills around 40 poor souls in Halloween Kills. 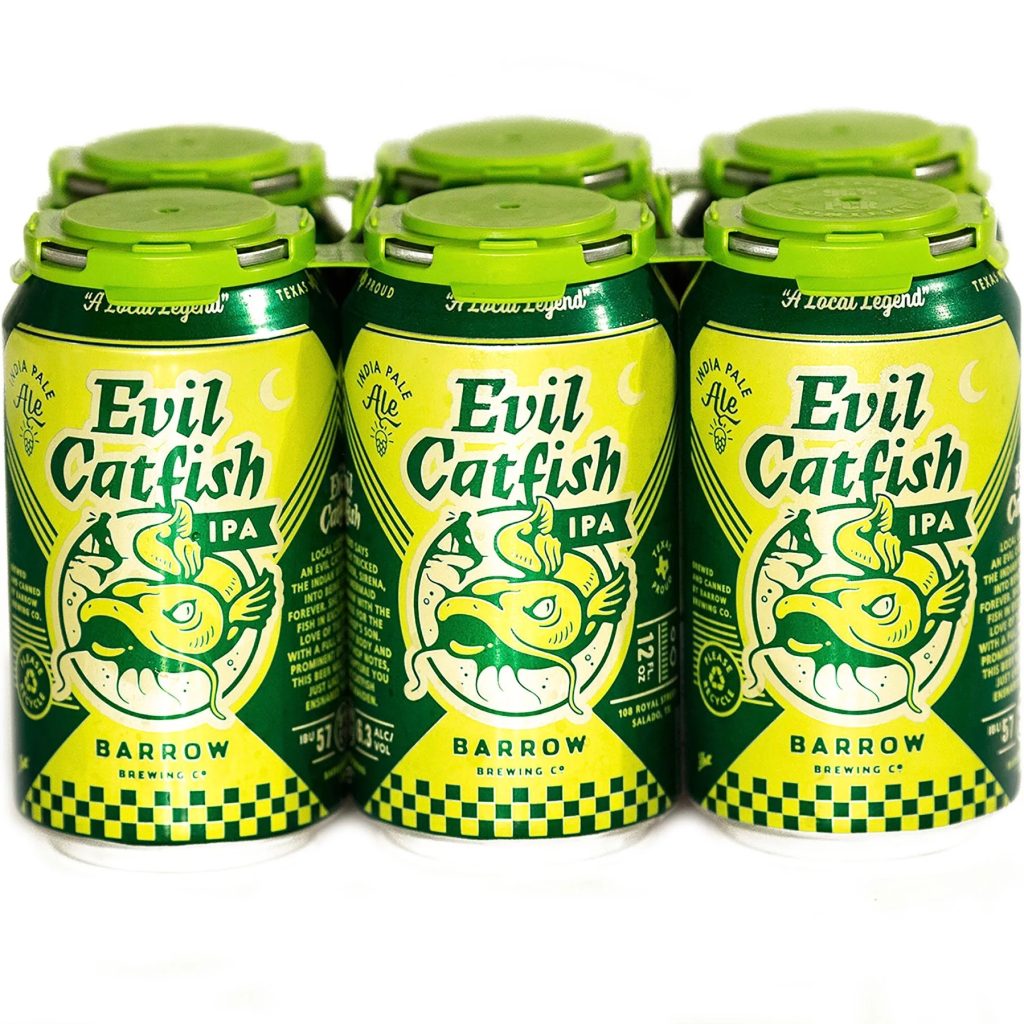 At 6.3% 56 IBUs, the Evil Catfish (evil like Michael Myers one might say) is a smooth beer that I’ve drank many times and it has paired well with every cigar I’ve saddled up with it and tonight’s stogie was no exception. 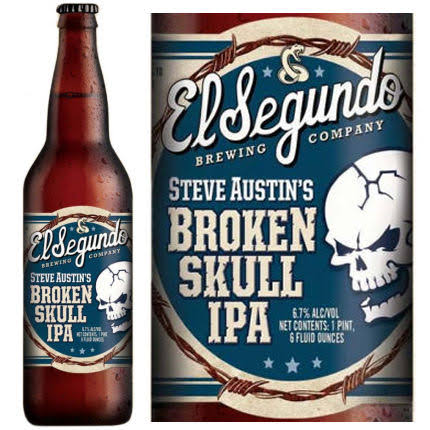 In the spirit of one of our favorite characters from tonight’s movie Halloween Kills, Big John, who get this skull literally broken by The Shape, I chose to end the night with the Broken Skull IPA! A collaboration between then brewery and Stone Cold Steve Austin, this tasty brew clocks in at 6.7% with 67 IBUs and, if I’m being honest, I found that IBU rating to be a bit high but I’ll wisely keep my big mouth shut so I’m not met with a Stone Cold Stunner upon leaving the safety of The Corner Of No Hope. Oh shit, I just told him where I am… So this TASTY IPA had the most pleasing aroma of all 3 of my beers and it features a zesty citrus component to it which brought a nice sweetness to the table and enhanced the cigar’s subtle fruitiness quite nicely.
CADE’S OVERALL PAIRING GRADE = A+ 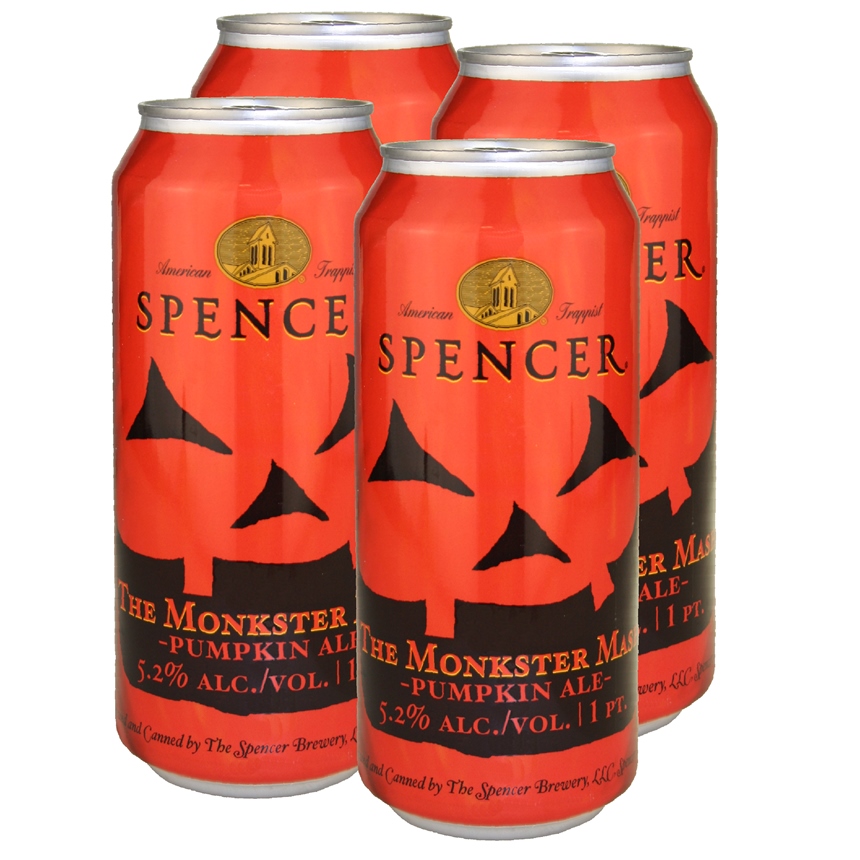 Not Monster Mash, not Monsturd Mash, this is the Monkster Mash! Because it’s brewed by Trappist monks obviously. At 5.2%, this pumpkin ale impressed the heavenly ghost right out of Tut – he loved it! Tut said this beautiful beer reminded him of a delicious, lighter tripel that featured just a minimal amount of pumpkin flavors. And when you factor in that it added some complexity to tonight’s cigar AND the beer can artwork mirrored Tut’s favorite Halloween t-shirt… well this pairing just hit all the right notes.
TUT’S PAIRING GRADE = B+ 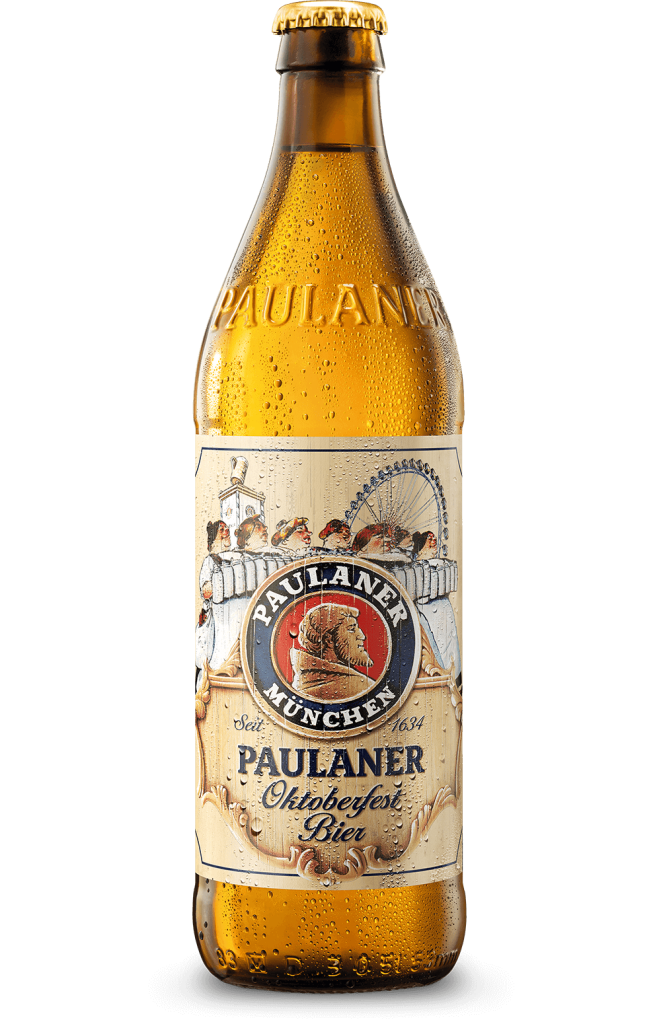 Based in Munich and dating back to 1634 (!), Pauliner knows their shit when it comes to brewing beer and this was clearly evident tonight based on Doc’s reaction to this tasty beer. At 5.8 and 20 IBUs, the Oktoberfest pours beautifully and seeing as how any Oktoberfest offering perfectly ties in with our “March to Halloween” this pairing was a winner on every level.
THE DOCTOR’S PAIRING GRADE = B- 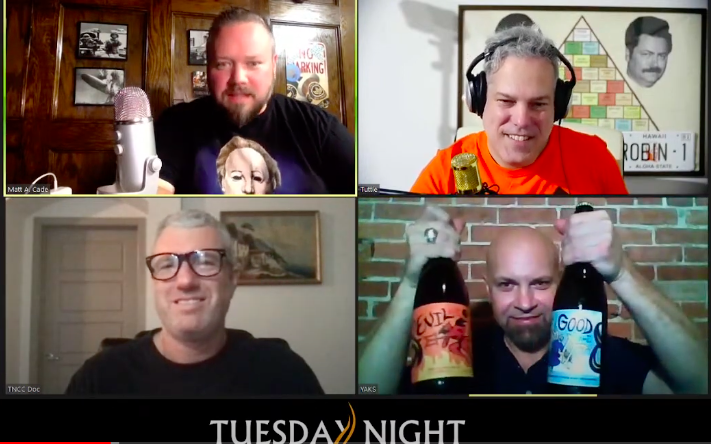 Yaks picked these bottles up way back in May in anticipation of tonight’s conclusion to our “March to Halloween” and for having that kind of forethought and planning alone I’m going to add a letter grade to his overall score here. The “Evil” IPA, again evil like one Michael Audrey Myers, is a double dry hopped IPA that rolls in at 7.2% and Yaks placed the bitterness around 60 IBUs. It’s juicy, it pours on the hazy side, and its citrus flavors were a nice dancing partner with tonight’s cigar. Oh and Yaks found it to be overall spectacular. What’s really spectacular is that one of us had two bottles of beer in our fridge for 5 months and were disciplined enough not to drink them. Holy shit! It’s a Halloween miracle. Yak’s second beer, the West Coast “Good” double IPA which has a slightly higher ABV of 8%, also paired well with his cigar and he felt it was a better selection to compliment the increased spice and enhanced breadiness the stogie featured in the final third. Good job Yak Boy!
YAKS COLLECTIVE PAIRING GRADE = B 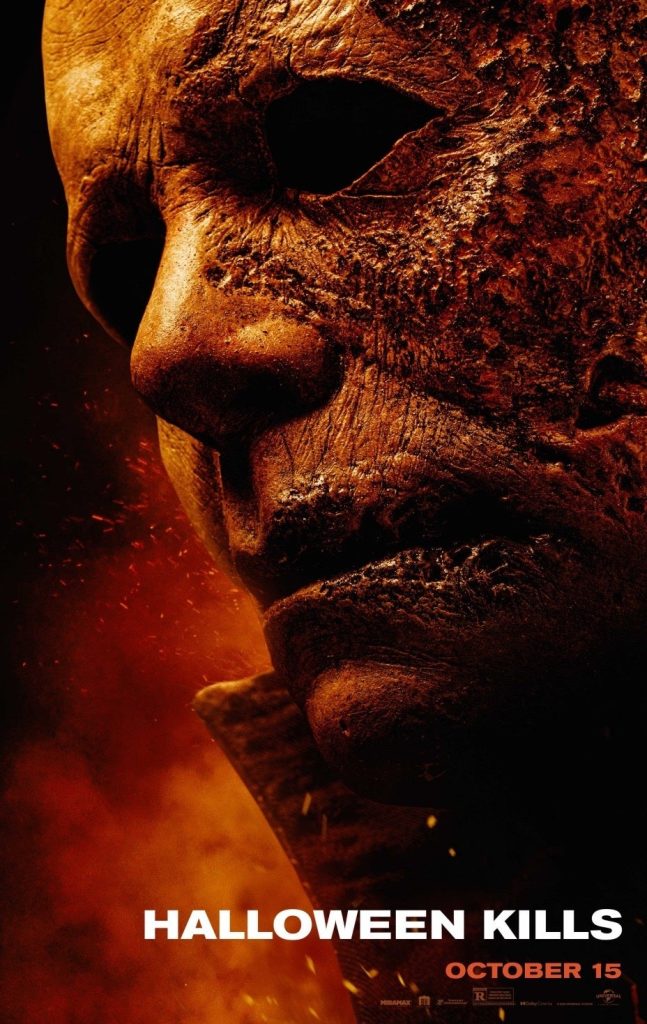 As always, we do a very deep dive in to tonight’s film Halloween Kills so I’m not going to divulge any of our thoughts about the movie here on this episode page. Having said that, there are things we liked a lot and things that we straight-up hated about this latest entry in our favorite horror franchise. 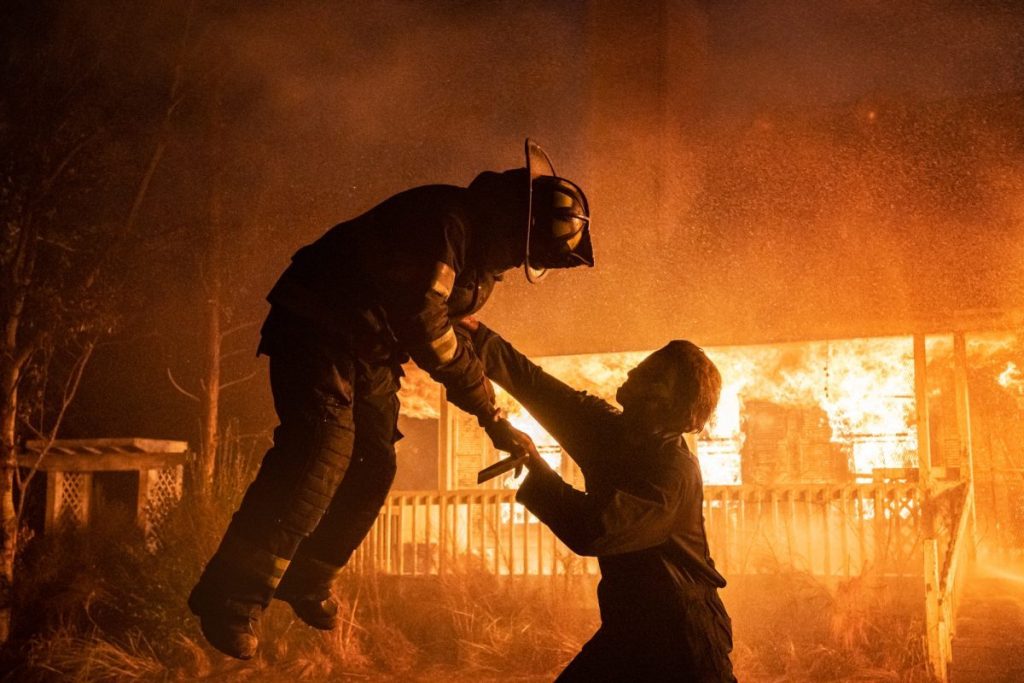 For a flick called Halloween Kills, The Shape does indeed kill a small army of men, women, and children here so from strictly a body count standpoint viewers will not be disappointed. And the four of us numbnuts rise to the occasion and kill a small army of beers while talking our way through this story. So click the links below and enjoy the show! 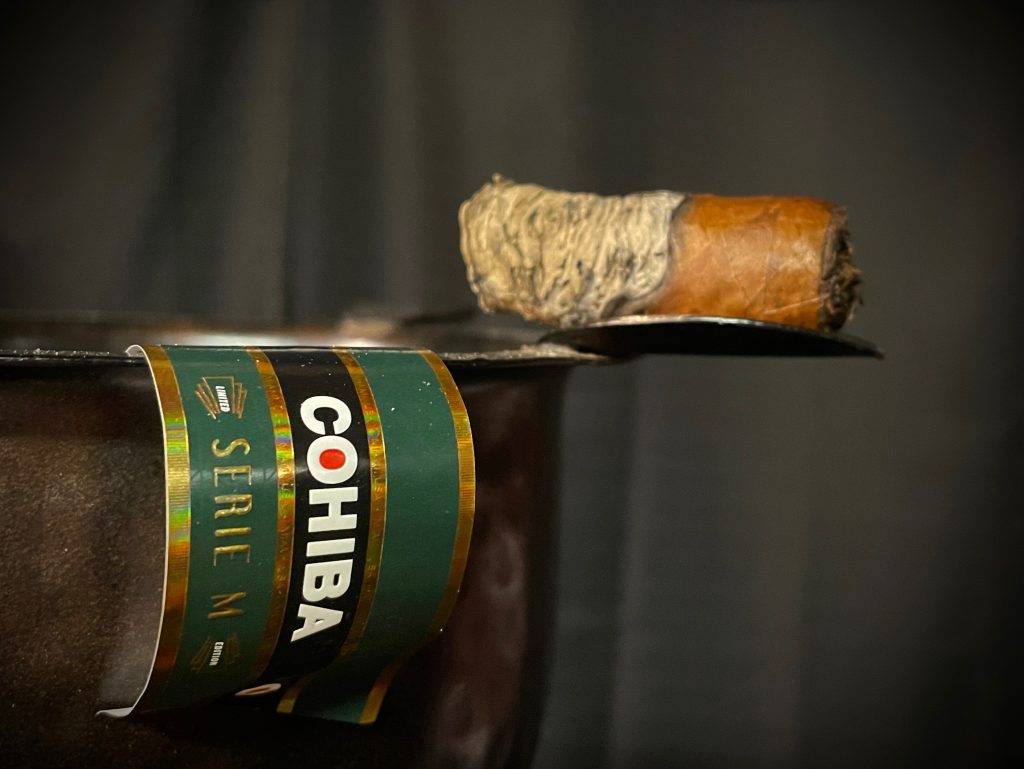 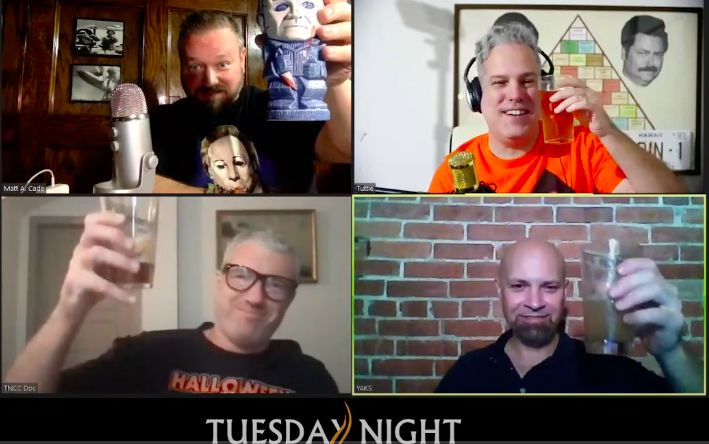