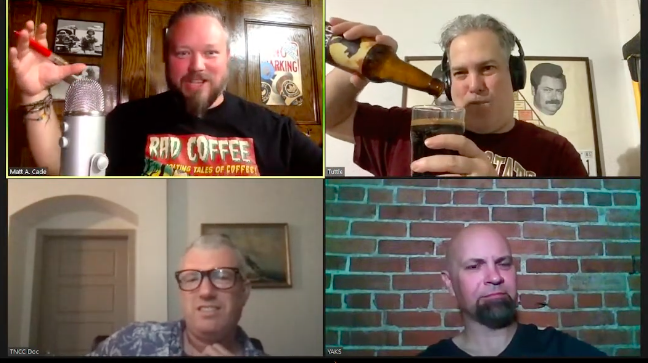 Welcome everyone to The Tuesday Night Cigar Club episode 156! Our 7th Annual Drunken March (stumble) To Halloween begins tonight!!! This is always our collective favorite part of the year and we kick things off in a big way this evening. So take a ganders below at what you’re in store for and then click the audio and video links at the bottom of this page to JOIN THE PARTY! 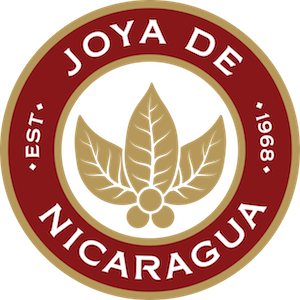 The Número Uno L’Ambassadeur is a limited release from our friends at Joya de Nicaragua, this line was originally produced many many years ago for the Nicaraguan government as a cigar to hand out to visiting diplomats. Seeing as how we are sort of diplomats, Drew Diplomats at least, it only makes sense that we’d select these beauties for review. This show is our numero uno entry in this year’s March To Halloween so the Número Uno cigar makes perfect pairing sense!

And YES there is currently an ice cream flavored cigar on the market that would have thematically made a lot of sense for tonight’s show but I already wrote about it on our website and Tut didn’t care much for that particular cigar so we’re moving on with our lives. Head over to TuesdayNightCigarClub.com and read my review on the Rocky Road cigar from Jas Sum Kral if you’re so inclined. It’s a pretty sweet review if I do say so myself, to cone a phrase… 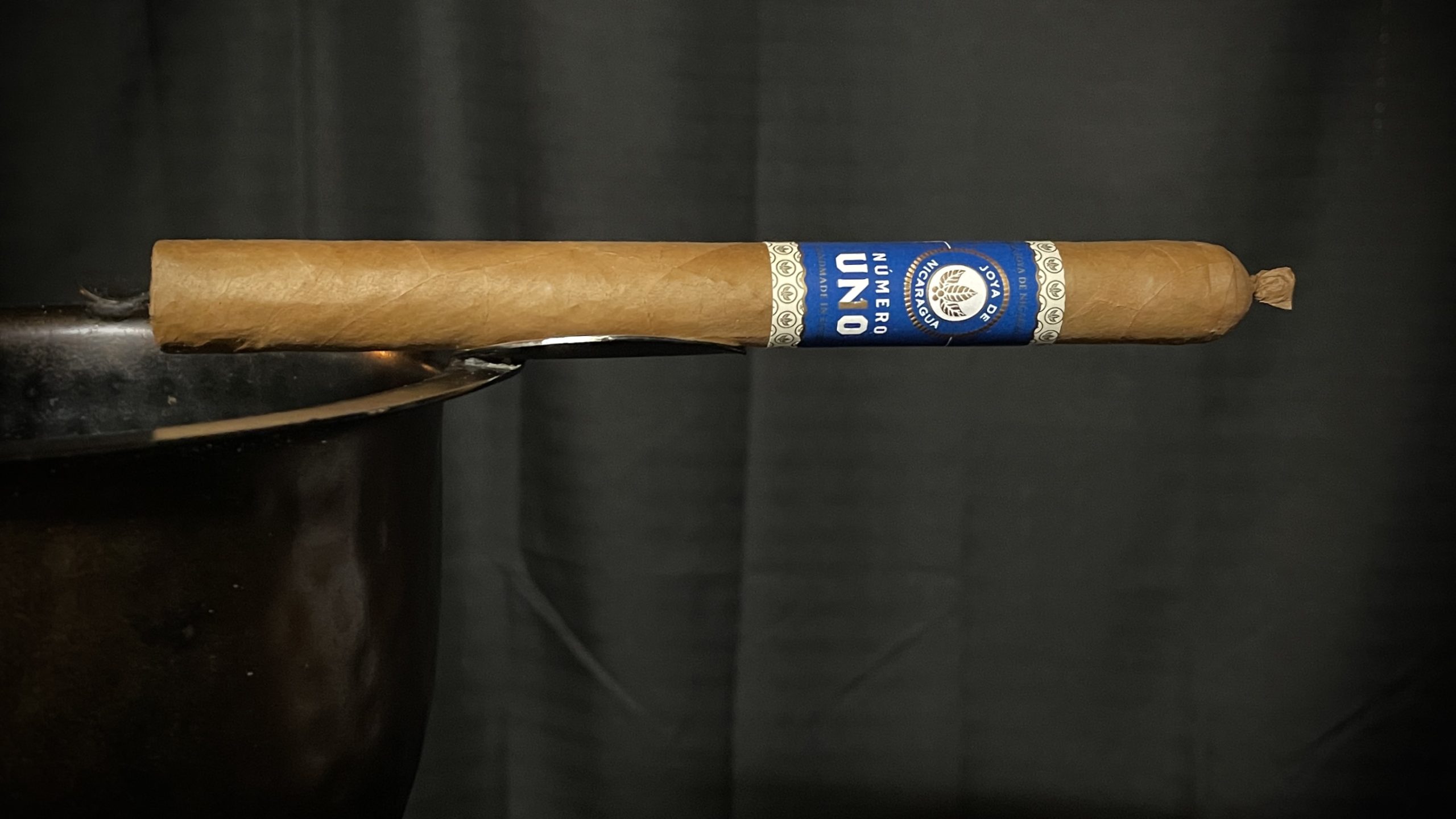 The elegant Número Uno L’Ambassadeur features one of the most golden Connecticut wrappers we’ve ever come across, it’s visually stunning. Speaking of which, the Ecuadorian Connecticut leaf has a distinct cedar aroma to it that’s joined by some rodeo stuff (lots of hay, no horseshit) and a mild sweetness. Upon gently twisting off the cigar’s cap, no cutting was necessary, the hay is also present on the cold draw where its accompanied by a hint of milk chocolate.

Upon ignition, the L’Ambassadeur delivers crisp white pepper through the nose accompanied by a unique blackberry note. The draw is almost entirely cedar with a floral component backing it up. Around the 1” mark, the pepper burn calms down tremendously in strength just as Nicaraguan mineral begins to arise from underneath the surface of it all… 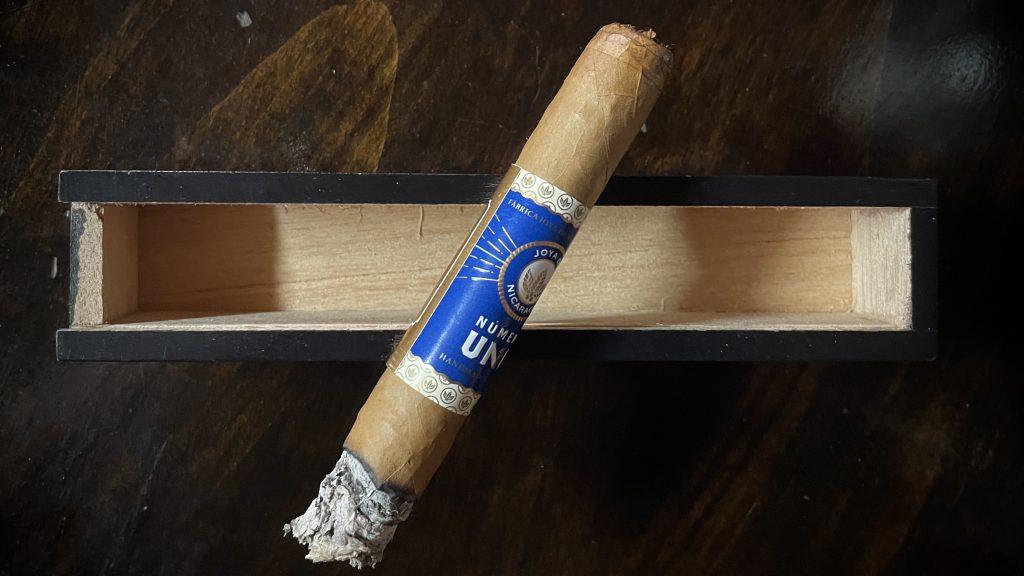 Construction from start to finish is very good with a smooth draw and straight burn line (the ash tends to drop frequently so keep an eye on that and your lap will thank you). As the faint blackberry sweetness begins to dissipate around the fifty yard line, a graphite note joins the lingering pepper via the retrohale and the complimentary Nica mineral moves downward becoming exclusive to the draw alone. That combination of mineral, cedar, and floral is stellar. 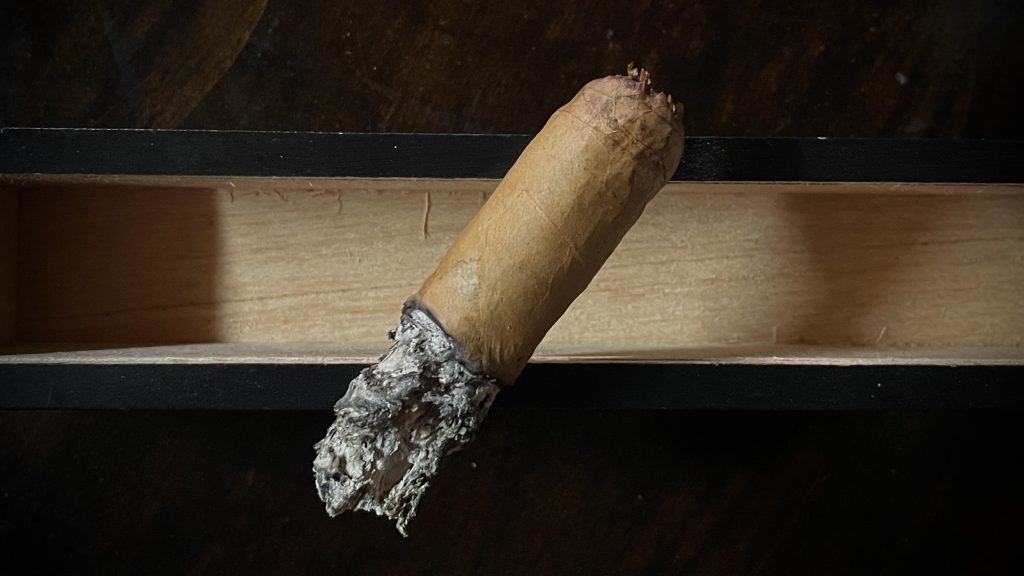 In the final third things come full-circle as the strength amps up dramatically yet it never threatens to overpower the cigar’s established flavor profile as all those existing notes in turn crank up their overall boldness simultaneously. Now aint that some shit? Also, as if those developments weren’t enough, at the very tail end of the smoking experience a butter note develops on the retrohale bringing a final surprise gift to what has been a truly enjoyable party. 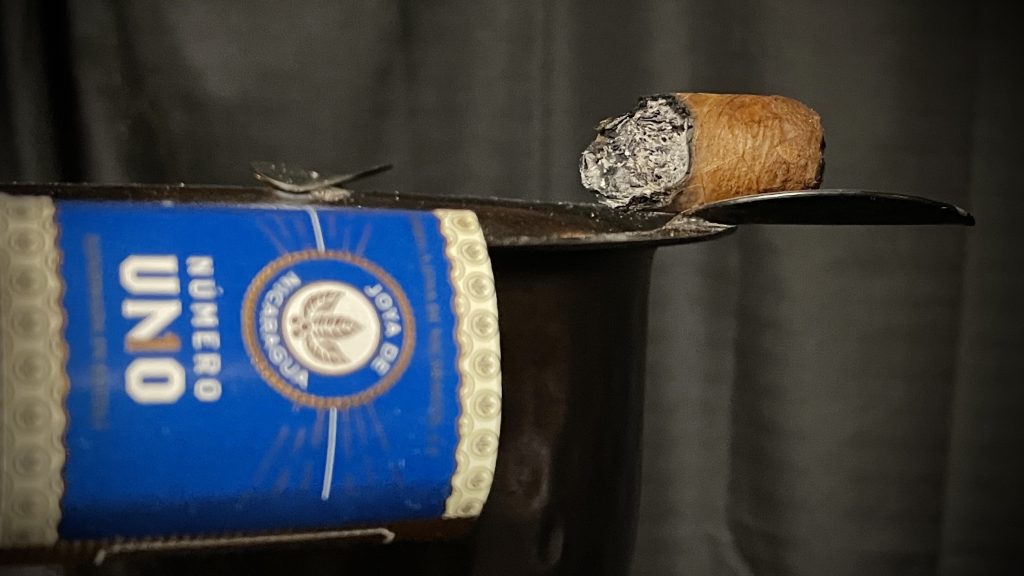 The Número Uno L’Ambassadeur is an elegant, slow smoking cigar that takes you on a well curated, thoughtful journey. Avoid pumpkin beers and high IBU beers while smoking this one, we thought that a super dry red wine would be a pairing homerun in hindsight. We also couldn’t envision this particular cigar being disagreeable to anyone’s palate, so why don’t you track down a Número Uno L’Ambassadeur and prove us correct!

Once again folks, usually (before everything went to total shit back in 2020) we would carefully – some of you have said “expertly” – pair our evening’s beer with the cigar and movie and we’d all sit around the table and drink that same beer and compare notes. But since this whole COVID-19 mess went down, each member of the TNCC is now solely responsible for risking their lives out in the wild, wild, West and acquiring their own beers for each episode… usually with very mixed results. 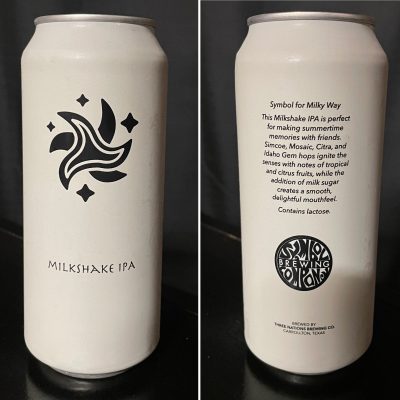 Both Yaks and yours truly expertly paired our beer selection with tonight’s movie. I know when it comes to my consistently primo picks there’s no surprise here but Yaks usually doesn’t hit it out of the park like I do, let’s be honest, so I was proud of him and I hope he continues to look up to me both as an inspiration and a hero as he grows towards becoming an expert pairing guru in my legendary shadow. Only time will tell though so let’s not all hold our collective breaths as Yak Boy has certainly let us down in the past. As far as the 6.8% ABV / 48 IBU hazy IPA itself is concerned, if you can get past the initial pour’s aroma of bathtub farts then this beer is actually pretty good! Simcoe, Mosaic, Citra, and Idaho Gem hops all play nicely with the strong citrusy flavors of orange and papaya. That fruit component, benefiting from the inclusion of milk sugars, danced really nicely with our cigars all night long…
YAK BOY’S PAIRING GRADE = B-
CADE’S PAIRING GRADE = A+ 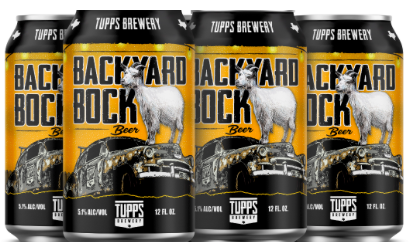 Coming in at 5.1%, this typical bock beer features a nutty profile of crushed almonds and Doc’s first impression was “Yuck!” But after a few more twelve ounce cans were emptied he somehow came around to enjoying it. Funny how that consistently happens around here… The Doctor reported to us that he selected this beer because tonight’s film features several scenes which take place in back yards. Yeah, he seriously said that out loud with a straight face.
THE DOCTOR’S PAIRING GRADE = F+ 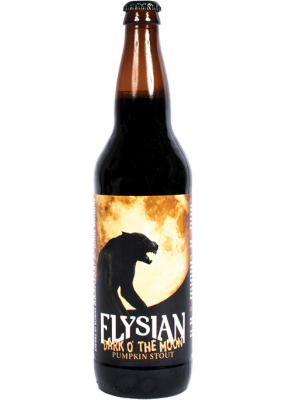 At 7.5% ABV, this “spookily smooth” pumpkin stout features some nice flavors of chocolate and dominating cinnamon. By dialing down the actual pumpkin, the Dark O’ The Moon is far more approachable than other similar seasonal Fall releases and Tut gave it mostly neutral feedback as far as his cigar pairing was concerned as well (just be sure to space the two out or else the stout’s heaviness can overtake the cigar’s nuanced profile if you sip and puff too closely together). Yes, the pairing thematically works as far as it’s a Halloween movie saddled with a Halloween beer BUT if they created a new beer to commemorate Tut’s beer selection tonight it would probably be called the Lazy As Fuck Sleepwalker Stout.
TUT’S PAIRING GRADE = C- 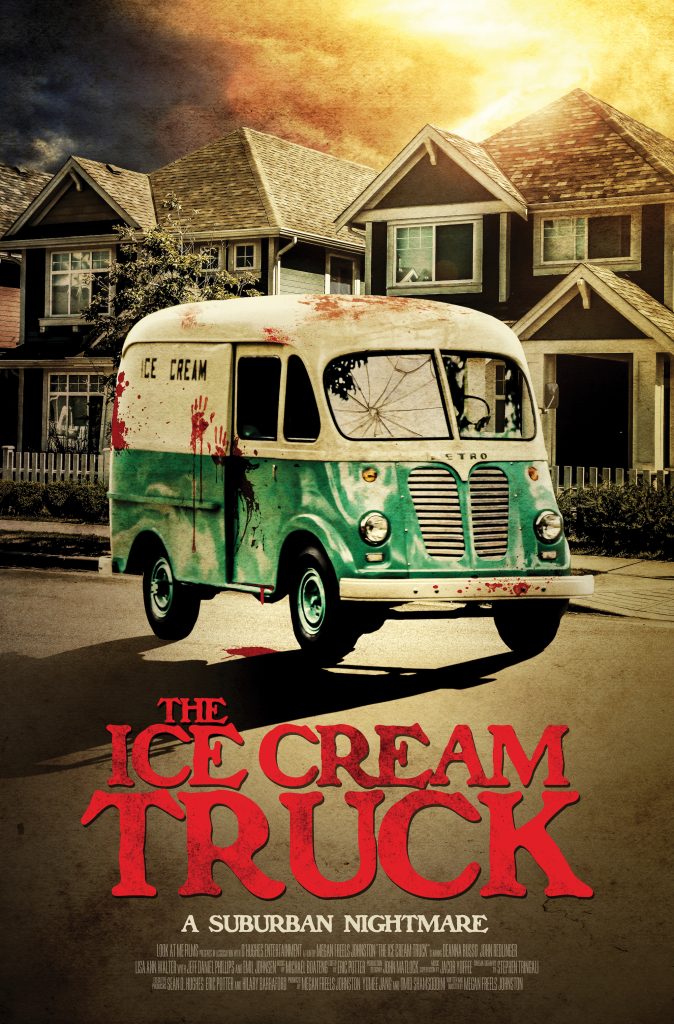 I selected The Ice Cream Truck, written and directed by Megan Freels Johnston, as the número uno film entry in our legendary March To Halloween this year because I really dug it when I first viewed it a few months ago and it’s one of those rare films these days where I found myself immediately wanting to watch it again – so that to me was a GREEN FLAG that we should probably dissect it on the show, and now here we are. See how that works?

With it’s fantastic and classically executed cinematography, impressive and constantly engaging musical score and sound design, highly believable dialogue and characters, and unique storyline, The Ice Cream Truck is easily one of my favorite horror films of the last five or ten years if not more. There’s just a freshness to it that I immediately fell in love with. And it’s a really cool cinematic take on what goes on in the creative mind of a fiction writer, whether it be screenwriting or novels, especially on subsequent viewings you can really see that aspect of it playing out expertly within the context of the imaginary world in the lead character’s mind that is the bulk of the movie.

It’s worth mentioning that this may be the only show in 156 episodes that we all cooked up in our minds a completely different theory on how the film would end and it was fascinating to see how it unfolded amid playing masterfully with our individual expectations. Yada yada yada, simply put – I fucking love this movie and you’ll love to listen to us talk about it. GUARANTEED*!!! 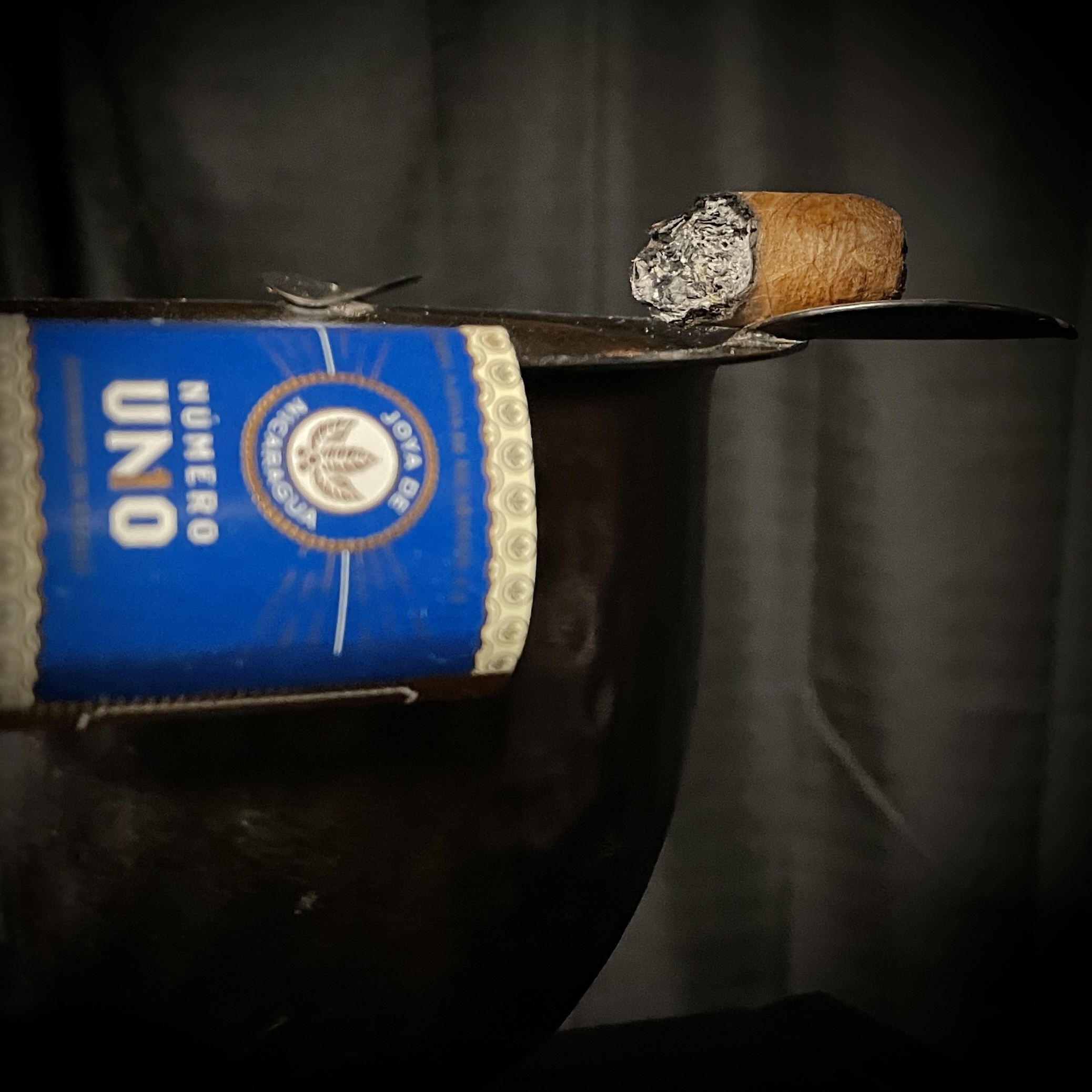 * Not actually a guarantee in any way, shape, or form. Listeners and viewers of The Tuesday Night Cigar Club press play at their own risk.