We may not quite be ready to delve off a springboard into All Hallows Eve just yet, but that doesn’t mean we cannot prepare ourselves with an autumnal horror movie warm up... 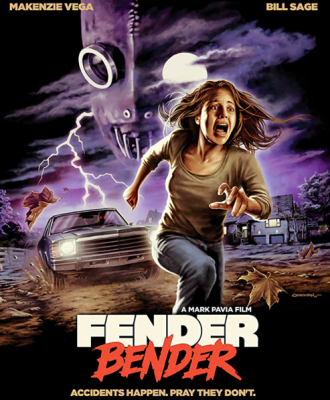 The sun dappled lakes of summer camp romance begin to recede but let not that vision bother your state of mind. Rather, let us change with the seasons and relish the promises of autumn, like football and the lengthening of the shadows. We may not quite be ready to delve off a springboard into All Hallows Eve just yet, but that doesn’t mean we cannot prepare ourselves with an autumnal horror movie warm up. As Ruben Blades warned us in the film Color of Night, be careful not to go fending benders. Ah, the hell with his advice, lets fend benders.

The sun sets in the evening as a young professional woman (unnamed in the movie but listed as Jennifer in the credits) arrives at her southwestern home. It’s the sultry Cassidy Freeman, most recently of TV’s Longmire but also a veteran of both Smallville and The Vampire Diaries. While talking on the phone to a friend about a minor wreck – or fender bender – that she experienced earlier that day, Jennifer pours herself a hearty glass of red wine and draws a bath. This may sound like a generic slasher movie setup, but it is executed with crisp precision. John Carpenter taught us that an empty hallway or staircase, shot at the right angle and using the right lighting, can induce a sense of indefinable dread. As Jennifer sinks into her bath and sips from her wine, she receives a text message from her “fender bender” friend who tells her to “enjoy the bath.” Along with a door swinging slowly on its hinges, the stalker-ish text messages serve to ratchet up the creepiness factor. A window is ajar and, after thinking that she has secured the premises, Jennifer slides into bed and finds herself face to face with a guy wearing a black ski mask and holding a knife. Oh, shit! Perhaps the various elements are not entirely groundbreaking, but it’s a delicious slow burn of an opening that sucked The Doctor right in. And I wasn’t even drunk. Yet.

On the following day, the mysterious killer rolls down the sun bleached, white line highways of New Mexico. He is just a fortyish man with blonde hair, hiding his visage behind a pair of dark sunglasses. He cannot wear his ski mask during the day for obvious reasons, mostly because it looks like a cross between the dominatrix mask worn by the infamous Gimp from Pulp Fiction and Harry Warden’s miner’s mask in My Bloody Valentine. I am still not over High Definition and how it has magically enhanced my movie viewing experiences. Fender Bender is shot professionally and looks fantastic from start to finish.

Bill Sage as “The Driver”. Might want to double check that your insurance is up to date…

Cute high schooler Hilary (Makenzie Vega) is spying on her typical douchebag boyfriend (football jersey and toboggan hat, even though we are in sunny New Mexico) and catches him kissing a slut in a cheerleader uniform, so she drives away in a torrent of emotional disaffection. While facetiming or instabooking (or whatever it is people do these days) with her friend Rachel, Hilary is targeted by the killer who smacks his car into her rear bumper while she is waylaid at a stop sign. Credit is due to Bill Sage as “The Driver” who hits on every disturbing and lascivious note, even during broad daylight in the suburbs. Hilary does the right thing and exchanges information… including her home address?!!? Jumping Jehoshaphat, I sincerely hope that most twenty-first century ladies know not to give out their home addresses to complete strangers. Giving one your phone number is bad enough. You can give them to me, but that is a different topic.

The game is now afoot!

Hilary’s strict-as-hell, asshole parents are entirely unforgiving and punish her by making her stay at home and not go on a planned family weekend trip. In other words, to make their attractive teenage daughter learn responsibility, the idiot parents leave her alone in their somewhat isolated home. I see. How can we expect more of today’s teens if their parents are no better than this? Hilary’s mom and dad qualify for the Bad Idea Jeans discount. To Hilary’s credit, she is too distraught over the breakup and the fender bender to throw a raging kegger. Had I received a similar dumping followed by a car accident followed by temporary familial abandonment, there is zero question as to what the teenage Doctor would have done: that house would no longer be standing. In the name of science, of course. 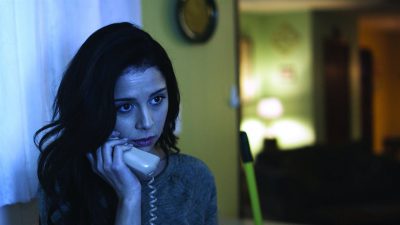 The evening brings on thunderstorms, and of course Hilary gets a text from her “fender bender” friend, another example of how smartphone technology has transformed our daily lives and the cinematic landscape as well. Hilary goes outside after darkness falls and leaves her front door wide open for several moments, providing evidence that stupidity might in fact be genetic. Someone has left her a cake with the word “Sorry” scrawled in rich frosting. Was it her putz of a boyfriend, or The Driver? Either way, I love it as a romantic gesture and will incorporate this move into my own dating life. There is nothing exceedingly new with the atmosphere of a suspenseful cat-and-mouse game, but when it is executed as it is in Fender Bender it is still tense and intriguing.

Realization dawns on Hilary that someone has snuck into the house, so she grabs a Louisville Slugger and readies herself to go Giancarlo Stanton on somebody’s ass… and almost decapitates two of her friends, Rachel and Erik, who have shown up with pizza and support. Their arrival provides the viewer with a momentary – and somewhat needed – retreat from the sweat inducing tension as well as adding potential body count fodder. The jerk-ass boyfriend Andy soon arrives, drunk and still wearing his toboggan like the nitwit that he is, and Hilary’s house is now Grand Central Station. Fender Bender therefore undergoes something of a transformation from the cat-and-mouse thriller to a more standard homage of slasher fare involving attractive teenagers… or perhaps more of a welcome hybrid of both. We know The Driver will be soon to arrive in his Gimp mask and he’ll be meaning business when he does.

Fender Bender gets two thumbs up from The Doctor. Great cinematography and a genuinely taut atmosphere create a sense of the willies, and Vega gives a winning performance as Hilary. She’s cute, she generates empathy, and she possesses a hidden inner toughness that is required of a likeable female lead in a good horror movie. The viewer needs to like Hilary and create an emotional attachment with her in order for the film to work, and Vega delivers on all fronts. Perhaps this is derivative, but the slasher genre itself is derivative at this point, so why not just make the best one that you can? The Doctor will be checking them out, along with legions of others. TNCC chairman Matthew Cade is usually right there with me, augmenting his Dr. Pepper with whatever medicine I have in my flask. If you are a fan of horror or suspense films and are ready for a good scare, check out Fender Bender at your earliest convenience. As always, good friends, The Doctor wishes you all a clean bill of health.