A colleague of mine once described this phase of a heavy drinker’s “disease” as that of “late stage alcoholism” but I was drinking heavily at the time and not really listening. 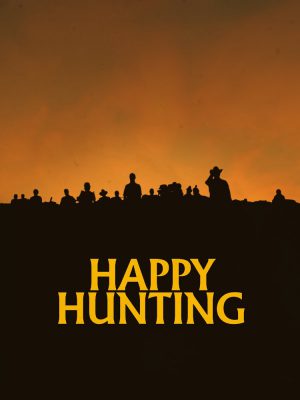 “An alcoholic drifter must battle withdrawal and psychotic rednecks after he becomes the target of a deranged sporting event.”

And no, that is not the lead-in to The Doctor’s essay on how I spent my Labor Day weekend. It is instead the synopsis to the highly enjoyable indie horror release Happy Hunting, produced by Waterstone Entertainment and Selective Collective. I did once have a run-in with some psychotic rednecks at a deranged sporting event known in Texas as “frog-gigging” but I wasn’t suffering from withdrawal. Only quitters do that. Frost Four Loko or Absolut Vodka, if you are looking for a new spokesperson, then I am your man! Not interested? Ah, the hell with you, back to the movie.

Happy Hunting is an updated look at the theme of The Most Dangerous Game, where man is both the hunter and the hunted. This theme has been revisited in film from time to time, but I can’t remember it being as gleefully fun and subversive as it is with Happy Hunting. Points to writers/directors Joe Dietsch and Louie Gibson and a thoroughly enjoyable cast. Dietsch and Gibson also pull triple duty as they served respectively as the cinematographer and editor, which is noteworthy as Happy Hunting looks wonderful in addition to being a fun romp of an action/horror film.

We begin with a bloodied old hobo fleeing on foot through a barren wasteland of cracked, flat earth in the middle of nowhere. The poor old bastard meets his violent demise with a high-powered shell to the eyeball, although we do not see who or what is responsible. Happy Hunting then introduces the viewer to our antihero Warren, played with hangdog aplomb by Martin Dingle Wall. Actually, the first thing we meet is Warren’s domicile which is littered with booze bottles, scores of cigarette butts, a sink of filthy scum-coated dishes, and a recent notice that the water is about to be shut off. There is no better way to inform an audience that a character’s life has gone to shit than by showing us living environs like Warren’s. Still, he does have dog tags, so who knows…

Warren is finally set in motion when he receives a call, in a somewhat hazy scene, that a loved one is in trouble. In an attempt to finance this road trip, he tries to sell cheap dope to a couple of hillbilly crank dealers while suffering from a hideous case of delirium tremens, due to the fact that Warren is a serious alcoholic. A colleague of mine once described this phase of a heavy drinker’s “disease” as that of “late stage alcoholism” but I was drinking heavily at the time and not really listening. One of these equally menacing/amusing characters is known as Bo Dawg (played with a sinister verve by Jeremy Lawson) who will appear later to torment/advise Warren in a series of a hallucination/dream sequences. Warren gets the best of hillbillies before absconding, although the kingpin of this backwoods drug operation is hot on his tail. 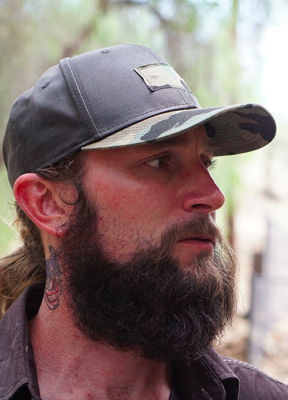 Jeremy Lawson is excellent as the character of Bo Dawg.

Warren stops at a fleabag motel in the town of Bedford Flats, and if his adult life had not already been comprised of a series of mistakes, then it surely goes down that path from here. He makes the critical error of telling one too many locals that he is “just passing through,” including a seemingly kind fellow at a local AA meeting. Take it from The Doctor, folks, if you find yourself even temporarily stranded in a one-horse shithole like Bedford Flats, tell them as little as possible! Seriously, Bedford Flats looks like it was transplanted into the American Southwest from some depleted hellhole in Syria.

The annual hunting festival in Bedford Flats may not target buffalo anymore, but the hunt is still on, and Warren and his DTs and his “just passing through” persona have him earmarked as an obvious target for the hunt.

It’s time for the hunt in Bedford Flats. Bring the whole family, it’s a bitchin time. We’ll roast some weenies!

I loved this angle of Happy Hunting: it’s not just a few, sadistic individuals who perpetuate the hunt but rather the whole friggin community is in on it! The sheriff, played by Gary Sturm, is himself the ringleader and master of ceremonies for the whole sordid affair. It’s like a backwoods version of The Purge and, as with The Purge, these hayseeds think that they are doing right. This a great mindset for a film, especially as enjoyed by The Doctor, and it is executed brilliantly.

The “contestants” are given a head start into the blinding salt flats, not unlike Cornel Wilde in the 1966 movie The Naked Prey. As stated earlier, this is a wonderful environment with mesmerizing shots and crisp editing, at least to the ocular digits of yours truly. The game is afoot and the hunters are on the move.

C.J. Baker as Don, one of Bedford Flats stout citizens and “hunters.” Remind me not to buy a time share in Bedford Flats.

Happy Hunting is a great ride, filled with little twists and turns along the way but still adhering to the theme of what makes the idea of The Most Dangerous Game so enjoyable. The hunters will get their kills, but what happens when our antihero inevitably disarms one of them and gets his hands on a weapon? Will Warren survive the boozer’s shakes enough to escape to Mexico? You know I won’t tell, The Doctor doesn’t deal in spoilers. Suffice it to say that you should check out Happy Hunting at your first opportunity. This is an extremely technically well made (and well-acted) and very fun movie with all of the depravity and action that it requires. In an age where filmmakers are trying to capture what makes horror movies great or even try to reinvent them in ways where they are usually not up to the task, Happy Hunting is a winner. As always, The Doctor wishes you all a clean bill of health. 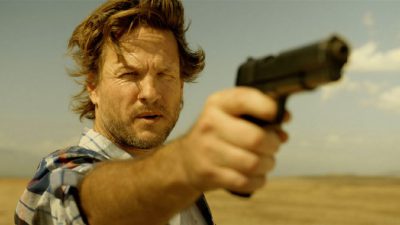 We’ll see you right back here for The Doctor’s next titillating film review, OR ELSE!