Trick should be given props for being both slightly non-traditional while also paying homage to the slasher film genre. The film is engaging throughout and never takes its foot off the tension pedal... 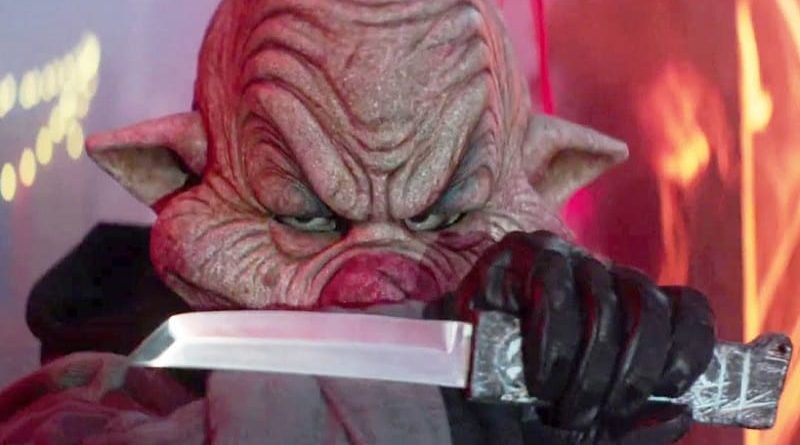 The frost has settled on the pumpkin. As any faithful fan of the Tuesday Night Cigar Club not currently suffering from delirium tremens well knows, The Doctor loves his horror movies. Should they take place after the autumnal equinox, more’s the better. Hence, when TNCC chairman Cade suggested that yours truly take a gander at the recent release of Trick, a Halloween themed slasher movie starring Omar Epps and the legendary Tom Atkins, I was fully aware of my job responsibilities. I skipped over to the nearby Market Street greengrocer to purchase a bottle of crispy California Sauvignon Blanc before repairing to my new laboratory to get down to business. 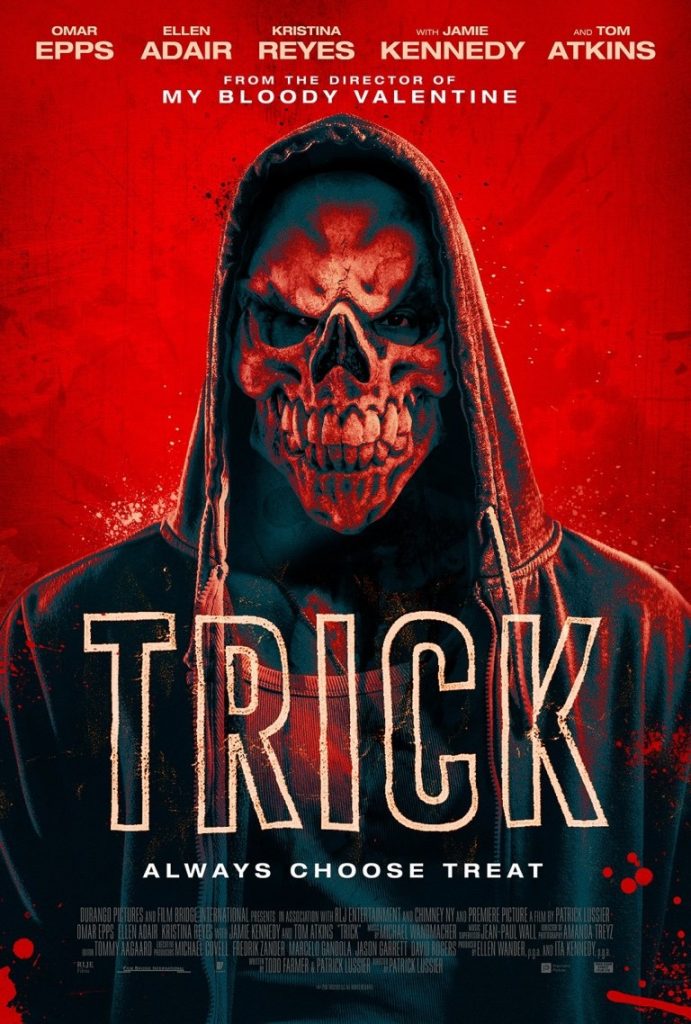 The bar for an opening horror movie montage was forever set in stone by the sequence of beautiful, eerie sunset shots that begin Halloween 4, released back in the salad days of 1988. It’s an artistic masterpiece that will never be ascended, but Trick provides its own worthy look at a small-town autumn dusk that is brief and effective. The mood is established.

A screen caption informs us that we are in Benton, New York, an upstate burg circa Halloween 2015. A game of “Spin the Bottle” is underway at a high school house party which begs an important question as far as sociocultural trends are concerned: is “Spin the Bottle” still a real thing that kids engage in? Granted, The Doctor is quite removed from my own formative years and thusly uninformed but I had assumed by now that high school parties involved some combination of vaping and opioids. “Spin the Bottle” certainly doesn’t satisfy the participants at the fictional Halloween party in Benton; in fact, Trick – short for Patrick – whips out his knife at the results of the spinning bottle and starts slashing away at his classmates with the professional acumen of Jason Voorhees. Trick’s reasons for going apeshit are unknown, but so it was with Michael Myers until Halloween 6, and that turned out to be the last film before that wonderful franchise was rebooted or restarted or whatever the hell you call it.* 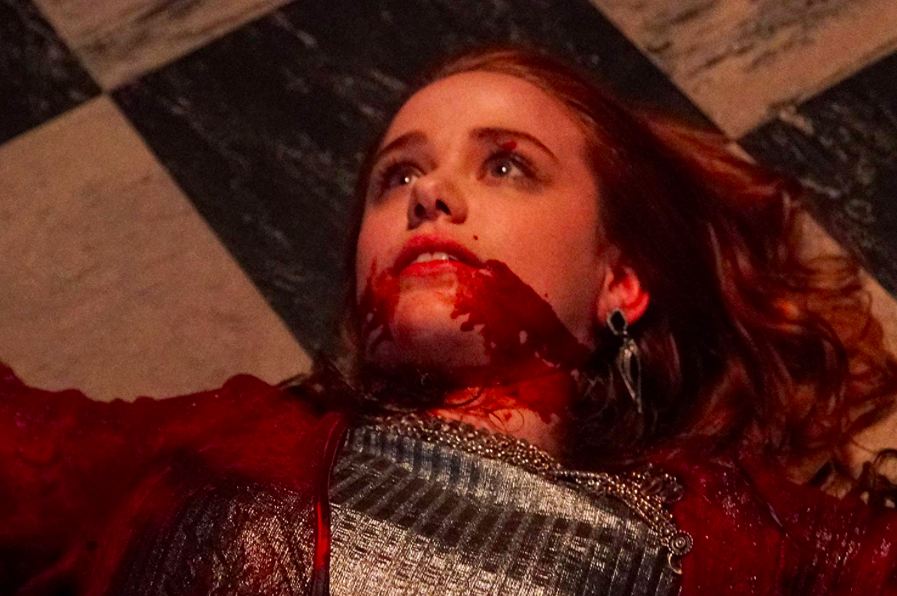 This is no trick, the bloodbath is quite real…

Trick is wounded by another student during the violent melee and is taken to a hospital before he can be incarcerated. He escapes his bonds and kills several more people before he is shot by law enforcement and crashes through a window, plunging several stories. When the cops get downstairs, however, Trick’s body is nowhere to be found. Sounds familiar, eh? It’s the Michael Myers construct all over again and the mysterious Trick is gone… until a year later, when another masked killer shows up in a nearby town at a different high school Halloween party and goes on a brutal stabbing rampage… and again the year after that, and again the year after that. The annual Halloween mass-murders, whether perpetuated by Trick or not, have now become something of an internet legend. Trick turned out to have no family and no history and the killings seemingly occurr without rhyme or reason, another nod to the classical slashers of yore. Is Trick lying in wait for 364 days out of the year only to reappear and wreak havoc on the infamous holiday, or are the murders since 2015 the work of a demented copycat killer? And if you live in the upstate New York river valley that encompasses Benton and environs, isn’t it high time to pack up your Halloween decorations and relocate to a more hospitable locale? Granted, this probably puts a severe damp on the home seller’s market, but I would at least plan a Hawaiian Halloween vacation every year. I digress.

Omar Epps portrays Denver, the grizzled detective who shot Trick in 2015 and continues to investigate the case over the years, believing that the perpetrator is the same person. Epps delivers in his performance as a weathered, weary, professional law enforcement agent… the only problem being that Epps himself doesn’t look all that weathered. In fact, he doesn’t look much different from when he played Darnell Jefferson in The Program way back in the early nineties. How do the filmmakers get around the fact that Epps appears to be sipping daily from the fountain of youth? That’s easy: they dye a few of the hairs in his goatee grey, and then add a few more grey beard hairs with each passing year. Needless to say I loved this wholly unnecessary effort to age the character. Do we really look that much different over the course of four years? Nothing about such a maneuver is wrongheaded; I just found it amusing. 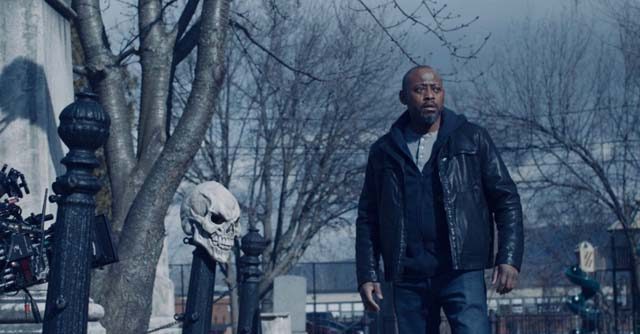 The mostly ageless Omar Epps, if you look closely you can see the grey frosting in his goatee

Another welcome addition for fans of the world of horror films? Talbott, the surly diner owner and town of Benton mainstay, is portrayed by none other than Tom Motherfucking Atkins. Now north of eighty, the snowy haired Atkins is no longer shooting vodka and sucking on supple twentysomething titties like the rugged Dr. Dan Challis from decades past, but he seems as spry as ever. Who am I kidding? The mere screen presence of Atkins, even in a small supporting role, is going to elevate any movie he appears in for as long as he feels like doing it. Talbott also operates an annual Halloween horror movie festival/haunted house/fundraiser that serves as a convenient setup should Trick make his annual return. 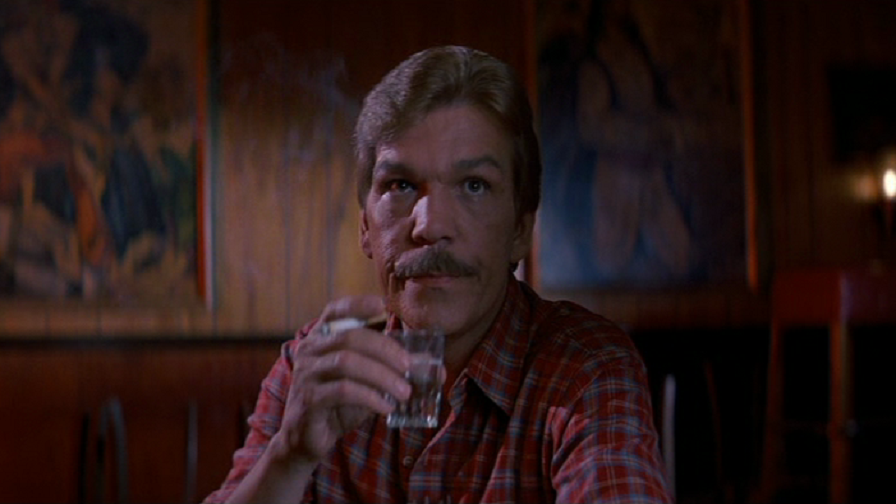 Thirty-five years have passed since the days when Dr. Dan was frequenting the dive bars

Trick should be given props for being both slightly non-traditional while also paying homage to the slasher film genre. Unfortunately, despite the able performers, I thought the proceedings were a touch uneven. In my opinion there were too many moving parts, and I thought that the depth and scope of the story would have perhaps been better served by a six or even eight-part Netflix mini-series. This would have allowed some of the plot points and characterizations to flesh out rather than seeming rushed. 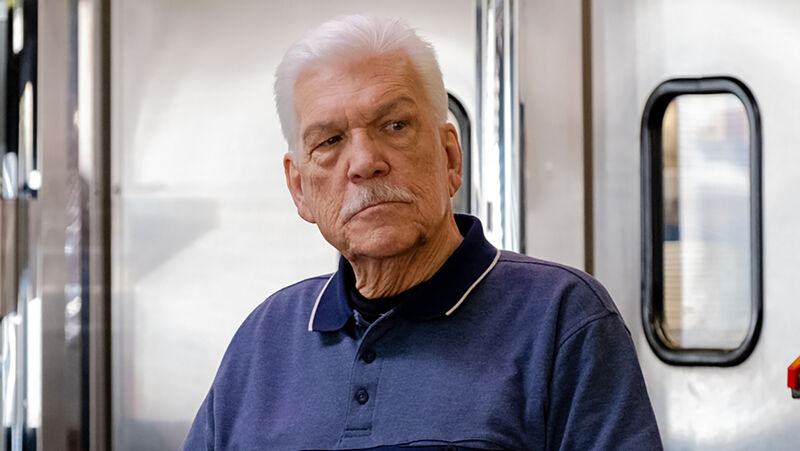 If nothing else, a mini-series would have given us More Motherfucking Tom Atkins!

Still, Trick is engaging throughout and never takes its foot off the tension pedal, so I’m probably guilty of nitpicking. Trick looks good, featuring a series of enticing set pieces/locations and will certainly satisfy anyone looking for a splatter fest. If a slasher film remains interesting from start to finish then that alone should qualify it as a winner, no matter your feelings on some aspects of the final product. Cade and I both appreciate director Patrick Lussier and writer Todd Farmer’s efforts with the My Bloody Valentine remake and the vastly underrated Jason X which Farmer crafted the highly entertaining screenplay. I liked Trick, I just thought that it could have been better. Maybe it was the fault of that Market Street white wine. Whatever the cause, I urge any horror movie fans to give Trick a viewing. As always, dear friends, The Doctor wishes you all a happy Samhain and a clean bill of health. 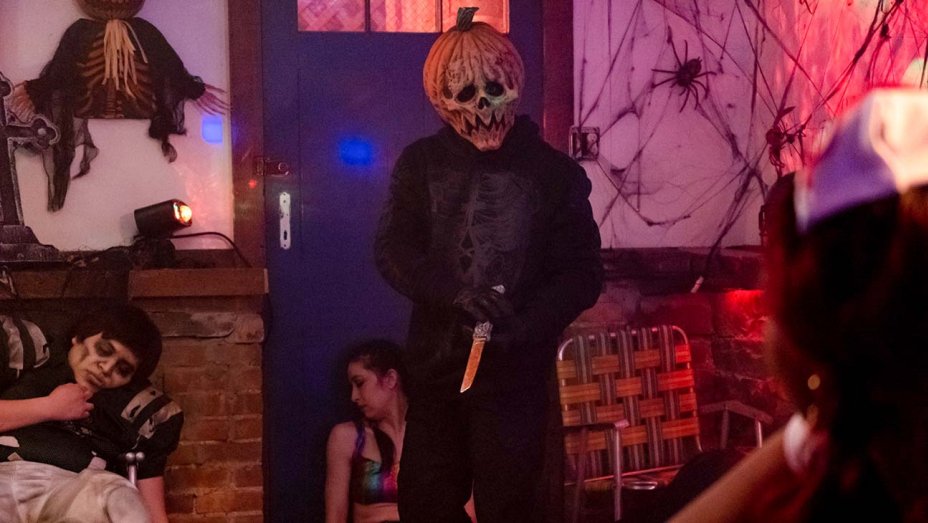 * I’ve said this before and I’ll say it again: whether discussing the theatrical release or “the producer’s cut”, anything that anyone finds disagreeable about Halloween 6 is directly attributable to the burning garbage barge that is Halloween 5: The Revenge of Michael’s Turds… which of course isn’t the actual title, but it may as well have been. Cade and The Doctor wrote a retrospective of Halloween reviews covering the entire series, so you can read more of our thoughts about those films elsewhere on this site.