Remember that time you walked into the movie theater and told them you wanted to see the new Star Wars movie but didn’t feel that you needed to pay for a ticket? Those liberal Hollywood billionaires have enough money anyway!

Remember that time you strolled in to your local cigar shop, grabbed a handful of premium stogies, and walked right out the door without paying? You’ve bought tons of cigars from that store before, you’re entitled to some free shit every once in a while!

How about that night you took your sweetie out for a romantic dinner and when the bill arrived you explained to the waiter that you had no interest in paying it? If the food was good you’ll come back and pay next time, after all a guy is entitled to sample the goods! And you’ve paid for countless other restaurant meals around town, that counts for something. Right?

Of course you don’t remember doing any of those things because that would clearly be crazy. And theft. You’d be arrested. The same rule applies to watching stolen movies and television shows online. People work hard to make this shit and if you steal it they’ll stop making it. Don’t be a thief, just wait patiently like the rest of us. If you find yourself exploring the dark web because you just can’t live without seeing a chick riding around on some stupid fucking dragon a week or two early perhaps you’ve got some holes in your personal life that need to be filled with shit that, you know, REALLY MATTERS as soon as possible. Theres no bigger Curb Your Enthusiasm fan out there than me but I can wait until the new season starts on HBO because I’m a grown up and I know right from wrong. It’s as simple as that.

Don’t be an asshole, nobody likes assholes. 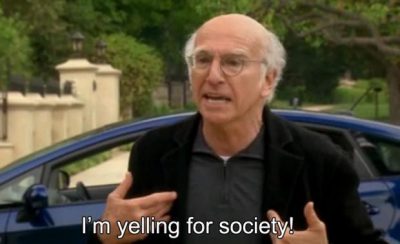