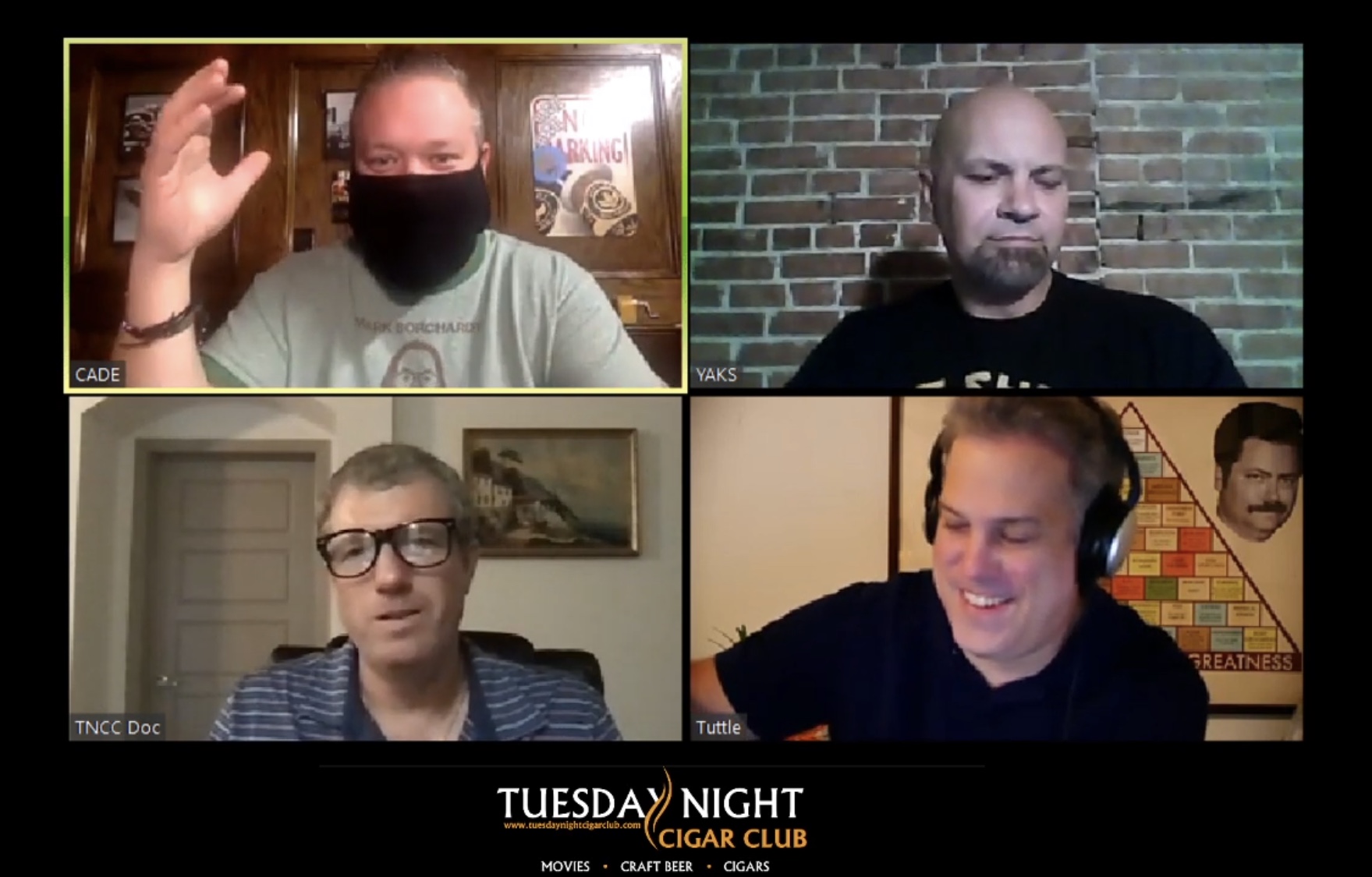 Welcome to the shitshow!!!

Ok, ok, I know what you were thinking as this webpage was loading so let us go ahead and address the elephant in the room. Yes folks, that obviously isn’t my hand holding the cigar in the pic above and in the photos below. Where as my creamy yet rugged, delicate yet masculine hands have been modeling cigars for over five years now, due to this pandemic bullshit Tut is now taking the cigar pics using his own hands for the time being. It aint pretty and it aint right and I realize that it’s just another thing that’s going to frustrate and disappoint you all in a time in human history full of other major frustrations and disappointments. I’m very sorry, and I promise that we’ll get back to our usual way of doing things as quickly as humanly possible… 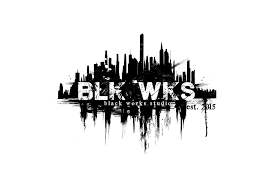 Way back in 2016 on Episode 25 we interviewed Black Works main man James Brown on the show as we reviewed the original NBK. The original was, and still is, a 6×46 box press featuring a Ecuadorian Habano wrapper that has a nice potent spice on the nose upfront before downshifting to medium territory across the boards with really nice cocoa on the retrohale and rich cedar and a little leather on the draw being the dominant notes. We liked it so much that we went to an educational NBK blending seminar at TJ’s Cigar Lounge in historic downtown McGregor, TX later that month to learn more and we ended up ranking it our #2 cigar of 2016. That’s high praise indeed… 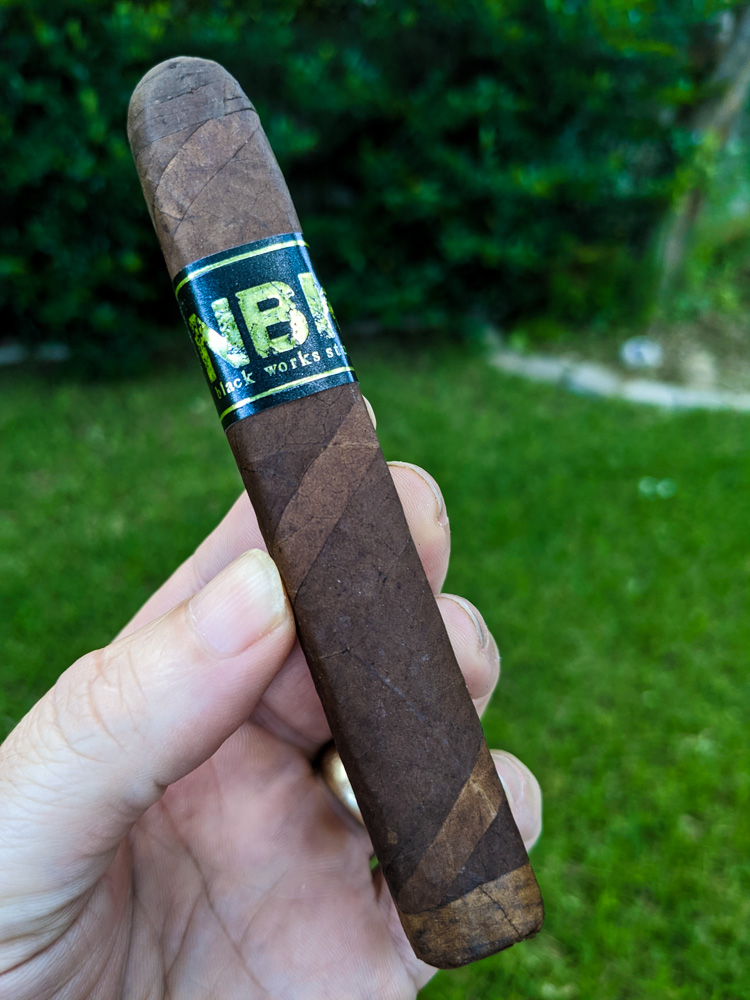 So tonight’s cigar is an “amped up” variation of that blend that’s available only at Black Works events, well until the End Of Days fell upon us and now brick and mortars are making them available to their customers and God bless them for it. We acquired these through the super easy and breezy curbside service at Smoker’s Abbey in Cedar Park, Texas. The NBK Lizard King is a really nice looking, oily to the touch, box-pressed cigar that features barnyard aromas off the wrapper(s) and a very obvious cocoa when sniffing the closed foot. 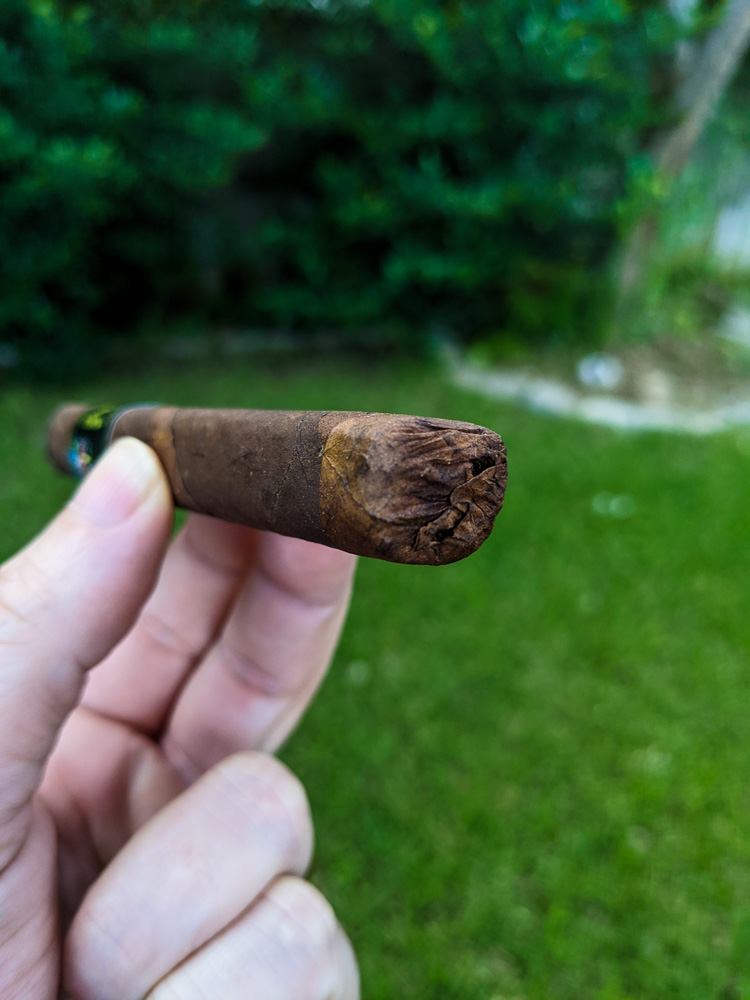 There’s that distinct and undeniable NBK spice on the nose upon torching the cigar but, unlike the original NBK release, it doesn’t quickly recede one bit as the smoking experience continues. It hangs around in the top of your nostrils like a generous blob of wasabi and that’s a good thing. The main players on the draw are chocolate and earthiness with just a faint hint of leather (Tut picked up a peanut note but ultimately he attributed that to his beer). Construction throughout is impeccable, with a strong solid ash (no small feet when featuring a barker pole wrapper) and a super smooth draw. The pepper spice on the retrohale never dissipates and that’s a selling point as the strength via the draw’s heavy earth, chocolate, and leather never subsides as well. It’s a bold Big Boy smoke that starts ballsy and ends ballsy and we all really dug it. 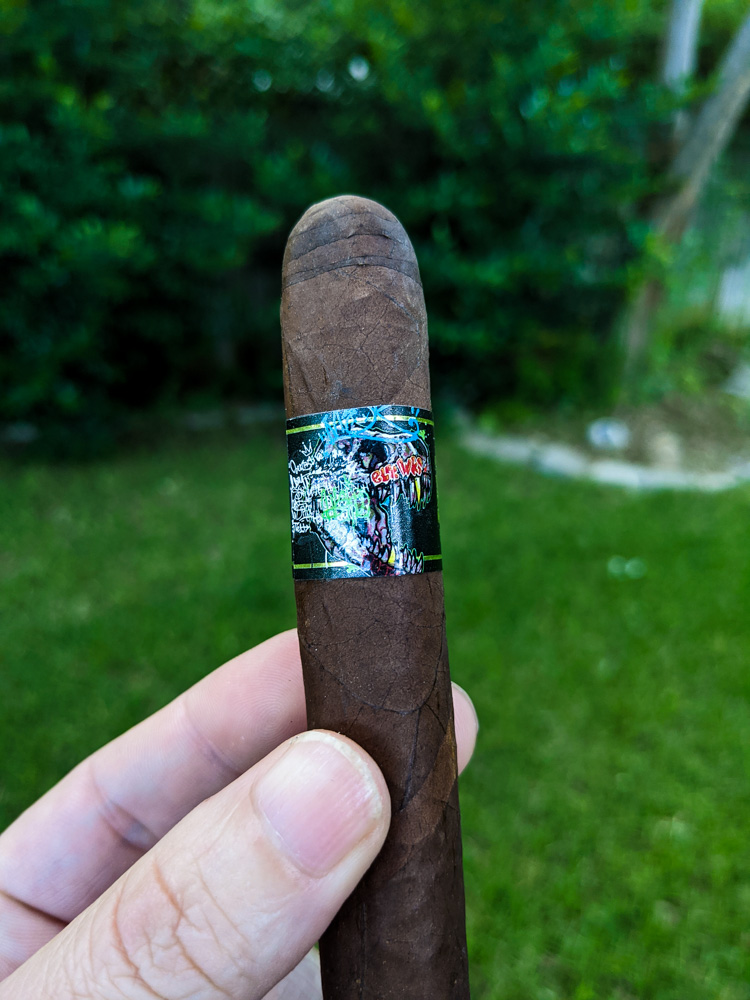 Again folks, usually (before this mini apocalypse was thrust upon us) we would carefully – some of you have said “expertly” – pair our evening’s beer with the cigar and movie and we’d all drink that same beer and compare notes. But since this whole COVID-19 shitshow has happened, each member of the TNCC is now solely responsible for risking their lives out in the wild and acquiring their own beers for each episode. It ain’t an ideal situation but, then again, what is these days… 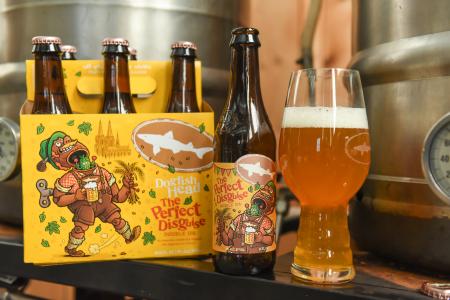 Citrus and floral flavors abound and Yaks loved it! 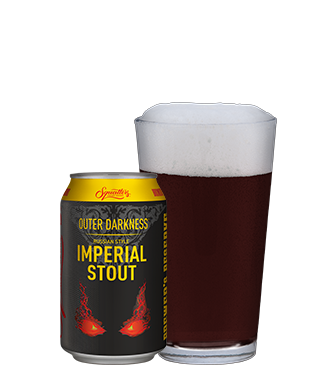 I’m admittingly not a stout guy, let alone not a Russian Imperial Stout guy, but I remembered that we paired the original NBK successfully with the Old Rasputin Imperial Stout and I’ve been drinking nothing but IPAs lately so I went for it. Big mistake. While I love Squatter’s Hop Rising offerings, this sucker just didn’t speak to me at all BUT it went well with the cigar thankfully so all was well. That lingering malty tingle on the back of the tongue played really nice well with the cigar’s spice so I can’t complain one bit… but i guess I just did. Go ahead and call me an asshole, you aren’t the first and you certainly won’t be the last.

Chocolate, dry roasted malts, and an underlying berry note really spoke to Tut as he enjoyed the shit out of this beer. Good for him. 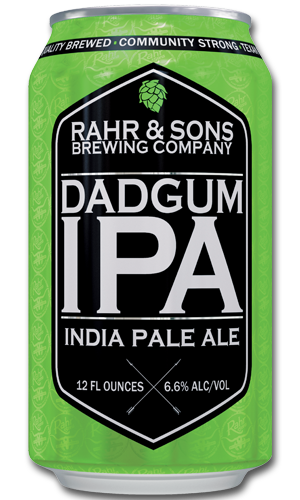 THE Doctor enjoyed this beer although he felt the high IBUs advertised were somewhat misdiagnosed. But the founder of the brewery is named Fritz Rahr which is a really fucking cool name so all is good with this one. 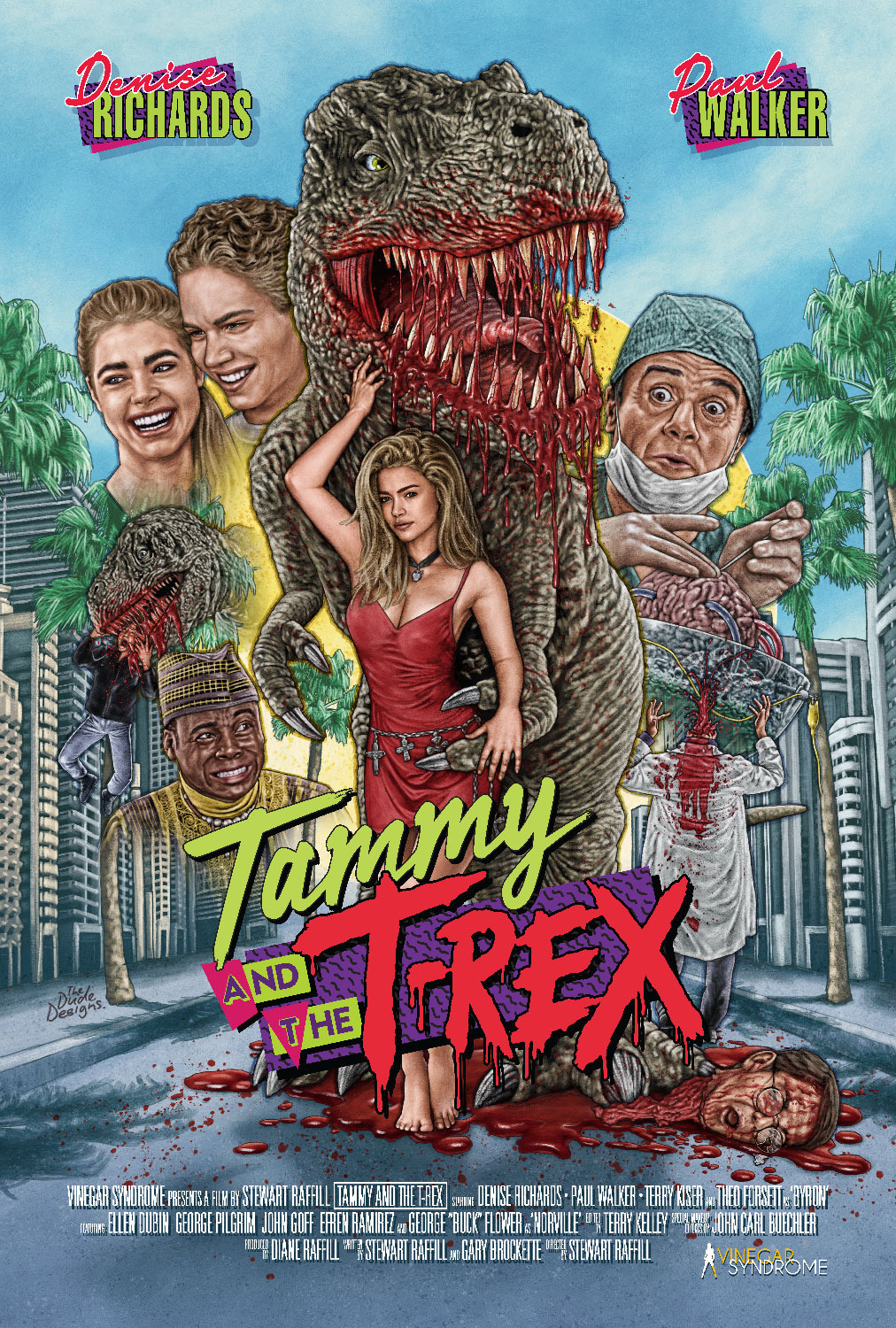 This film has quite an interesting history, I don’t believe we’ve featured anything remotely similar to it before on the podcast which is really saying something when you soak in just how many weird fucking movies we’ve talked about. When it was released on home video in 1994, Tammy and the T-Rex had a PG-13 rating attached to it and was presented and marketed as a sort of oddball teenage love story by the misguided studio heads BUT it was originally conceived and filmed as a blood soaked, rated R gorefest. This newly unearthed “Gore Cut” of the film was released last year by the outstanding home video distributor Vinegar Syndrome and is now available, after a very successful festival run, to view in all its bloody glory on your tv screens and tablets at home. How cool is that? 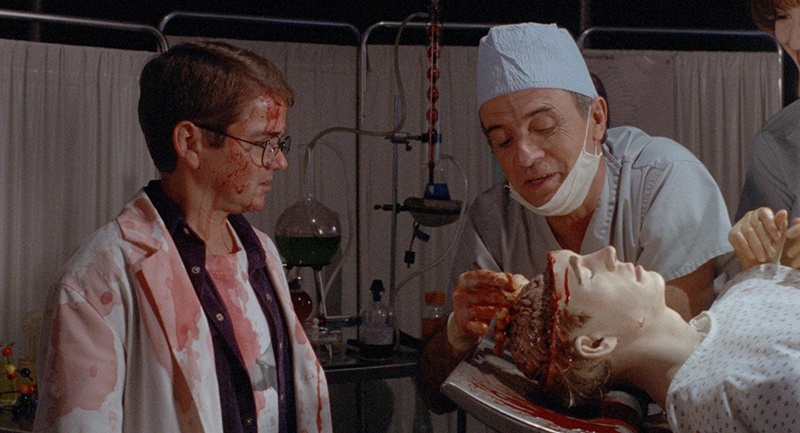 Isaac from “Children of the Corn” thinks it’s very cool indeed. Paul Walker… not so much

Directed by Stewart Raffill (1988’s Mac and Me, 1991’s Mannequin 2: On The Move, and… wait for it… 1984’s The Ice Pirates which we talked our way through back on Episode 99!) and get this folks, his cowriter on Tammy and the T-Rex Gary Brockette played “Percy The Robot” in The Ice Pirates! This podcast has become so unintentionally incestuous after so many years of soaking in these flicks, it’s just crazy to see these same names pop up show after show after show. 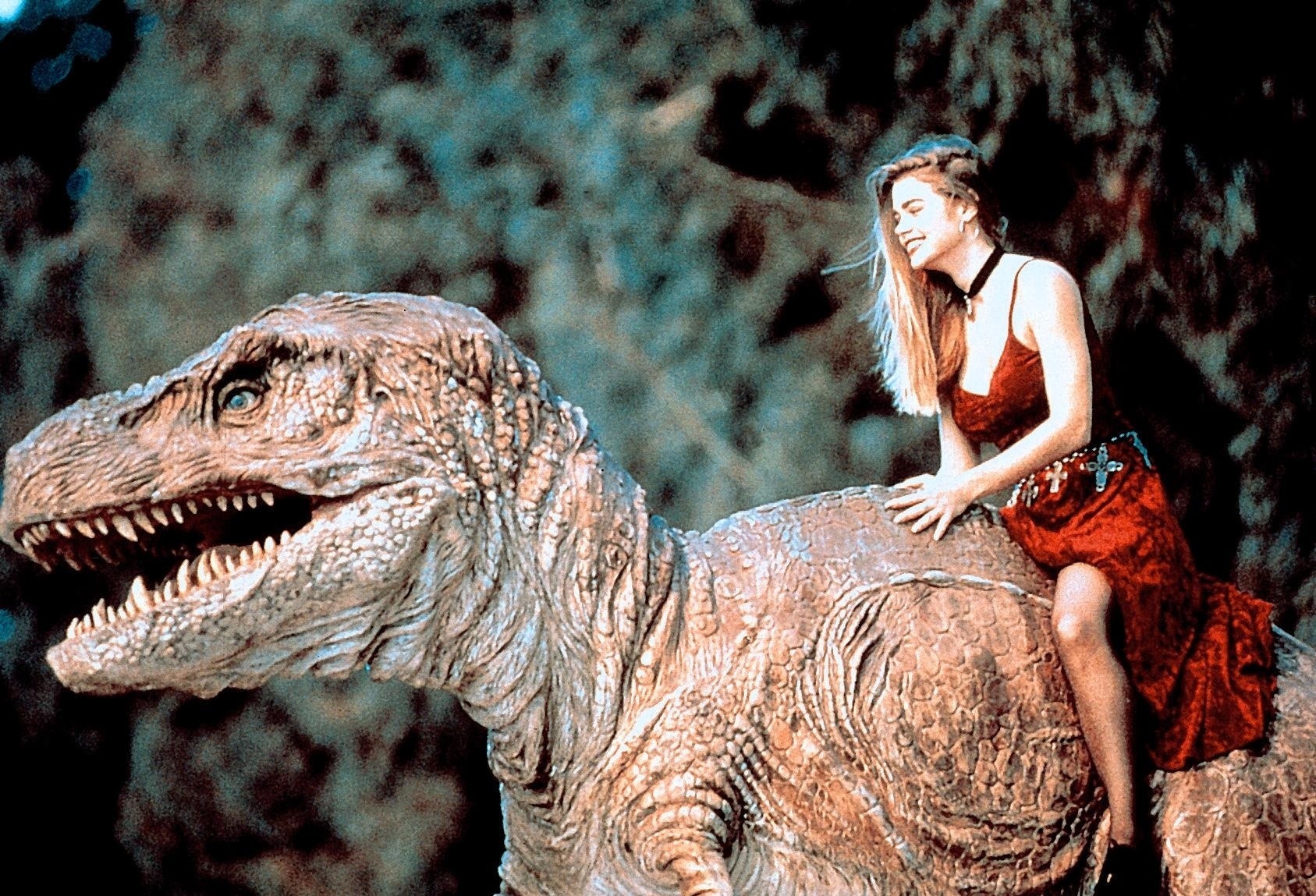 So what did we think of Tammy & The T-Rex? Well just look at the pics I included above and that should give you a clue and if you’re still not sure CLICK THE LINKS BELOW AND WATCH OR LISTEN TO THE DAMN PODCAST. DO IT NOW AND JOIN THE PARTY!!! 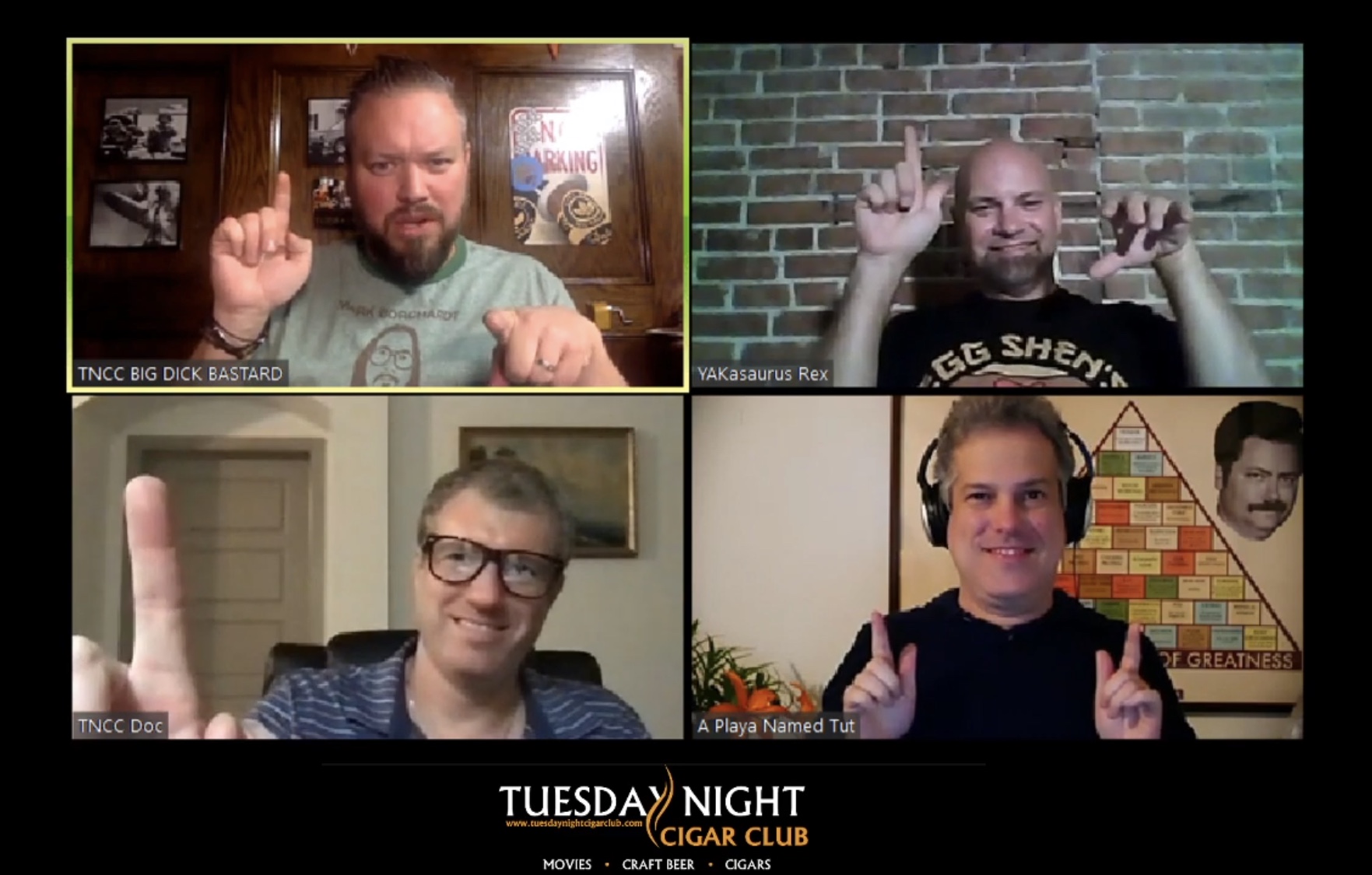