Suffice it to say, the scene may cause you to spill your popcorn. And spilling your popcorn too early is nothing to be ashamed of, it happens to a lot of men. Wait, what in the hell am I talking about? 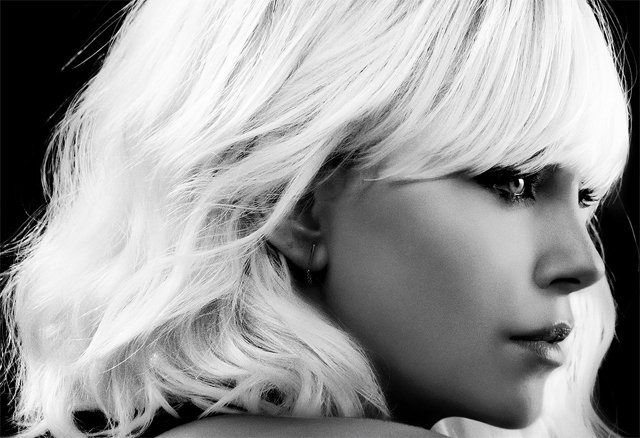 I admittedly knew nothing about the plot of Atomic Blonde, and it was obvious from the trailer what the bigwigs were selling: Charlize Theron as some sort of secret agent who wears sexy outfits and goes around kicking the living shit out of anyone who looks at her crossly. And really, not to sound like a chauvinist pig, but what more did I need to know? Well, nothing, so I bought my ticket and my buttered popcorn and my Sprite and attended the show at my favorite time spot, 4:40 pm on a Wednesday. 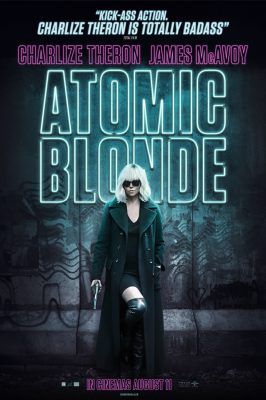 It turns out that Atomic Blonde is a period piece, taking place in Berlin in November of 1989, shortly before the fall of the Berlin Wall and the end of The Cold War. For those of you who join The Doctor in being emotionally pained by the fact that 1989 now qualifies a film for a period piece, there is always alcohol. It would be irresponsible of me to suggest consuming it in large quantities in order to dull the existential horror, but you can always imagine doing so.

Berlin in 1989 is an espionage hot zone that is crawling with foreign spies. A proposed East German defector known as Spyglass is rumored to have knowledge of something known as The List which contains the names and aliases of all the secret agents working in the country. Needless to say, this information is extremely valuable and all of the governments of the major players are willing to kill for it. The film begins with a British agent being killed by a Russian who then takes possession of the physical List. He doesn’t turn it over to his communist masters, however; he instead decides to make it known that The List is for sale to the highest bidder. So much for Perestroika, eh, comrade? Charlize Theron, as beautiful as ever, plays Lorraine Braughton, a British MI6 agent who is sent to Berlin to retrieve The List and/or help Spyglass get to the western side of the wall. She is almost immediately intercepted by East German agents upon disembarking from the plane and thusly the kicking of ass begins. And how! Whether it’s with a gun, one of her shoes, or a conveniently positioned hot plate, Theron’s Braughton opens up a dumpster-sized can of whup ass against the soldiers of the Iron Curtain. She is somewhat aided by her British contact in Berlin, Percival, played with a cigarette-smoking charm by James McAvoy who is clearly relishing his grubbiness. Percival has his own method for doing things, revealing that although secret agents may be from the same country, it sure as hell does not mean that they are on the same side. And that is the crux of Atomic Blonde. Who is working for who, and who can you trust? As Agent Braughton’s boss tells her before releasing her for the mission, “Trust no one.” 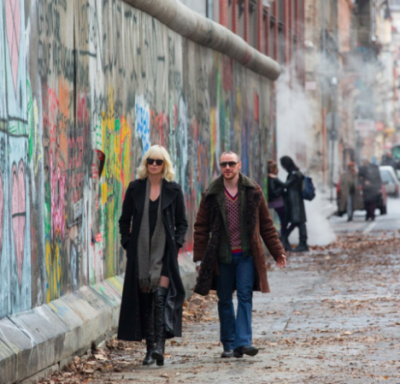 We are informed that the juiciest piece of information on The List is the identity of a double-agent known as The Satchel, a two-timing bogeyman who will be terminated with extreme prejudice by whomever gets there first. The setting of this high stakes, cat-and-mouse game switches expertly back and forth between the glitz and glamour of modern nightlife in the free, western half of Berlin and the bleak, slate gray atmosphere of the communist east side of Berlin. As historians or anyone who visited the region would know, Berlin was a very new city in 1989, having been built on the rubble of the old city that had been completely obliterated by the allied air forces during World War II. The West is a haven of sleek nightclubs, bars and hotels, while the East looks like a prison yard somewhere in Siberia. Both halves of the city become characters themselves in Atomic Blonde and serve as excellent backdrops for the action. The film doesn’t hit you over the head with references to the year, mainly because it doesn’t need to. We are told it is 1989 and that simple fact plus the wall’s existence are all that the audience requires, although I did enjoy the soundtrack which featured Siouxie and The Banshees, New Order, and David Bowie among others. 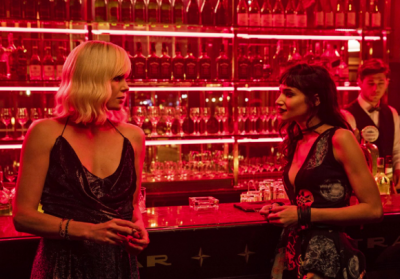 The good (West) part of Berlin. Portraying French secret agent Delphine Lasalle is none other than Sofia Boutella, recently of “The Mummy”

That is the plot of Atomic Blonde in a nutshell. There are twists and turns, as to be expected in a film of this nature, but I thoroughly enjoyed the ride. The action sequences are as awesome as Theron’s abilities to stomp on ass. You DID NOT want to be an East German Stasi or commie pinko who ran afoul of Agent Broughton. One spectacular sequence near the denouement appears to have been a ridiculously long tracking shot that covers several floors of a mostly abandoned building. It isn’t one tracking shot, of course – that would have been impossible – but it at least appears to be one. And while I am throwing out French words like denouement, how about a shout out to the French themselves, specifically French secret agent Delphine Lasalle, played by Sofia Boutella of the recent Mummy movie? The Doctor doesn’t reveal any spoilers, but since it isn’t central to the plot, I would be remiss if I didn’t point out that Theron’s character and Boutella’s character have an intense, passionate lovemaking scene. You read that correctly. In the words of Bart Simpson, ay caramba! The scene was relatively brief, but it almost resulted in The Doctor losing his consciousness. Let’s see, brief in duration followed by loss of consciousness… as far as you know, my own lovemaking has never been described in similar terms. As far as you know. Suffice it to say, the scene may cause you to spill your popcorn. And spilling your popcorn too early is nothing to be ashamed of, it happens to a lot of men. Wait, what in the hell am I talking about? Definitely check out Atomic Blonde and, if it is gone from the cinema by the time you read this, then plan on a Saturday night rental. Pour yourself a Stolichnaya over ice like Agent Broughton and thank me later. As always, The Doctor wishes you all a clean bill of health.