Sans the chaste rating, Black Christmas has all the makings of a classic slasher horror film, when suddenly... the proceedings take a rather sharp turn...

After a stretch of heat and humidity, the temperature dipped into the sixties on a recent Saturday and the north Texas region that The Doctor inhabits was pelted with an unremittent rain. Oh well. With everything still on virtual lockdown in this Year Of The Virus it wasn’t like I had any outdoor plans anyway, so I grabbed the Roku remote and started considering my options. For some reason I keep considering a viewing of the Blumhouse Productions release of Fantasy Island. I am pretty sure that my “reason” is Lucy Hale, which is a good reason for watching anything, but I just couldn’t take the plunge. Instead I settled on another Blumhouse* horror release, that being the third iteration of the classic slasher film Black Christmas. 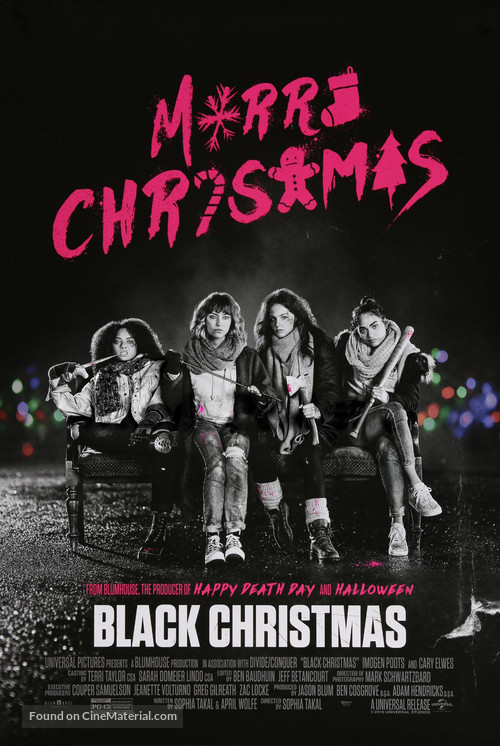 I have an affinity for “Campus Horror” and if that is not a real thing then I just invented a term. I love horror movies and I loved college, so combining the two fits me like a glove. The proper campus and right-sized college town just seems like a natural location for a slasher movie. Steepled towers at sunset and green quads emptied out after dark provide choice scenery. There are many examples of the form dating back to the eighties, some far better than others. I had recently revisited the enjoyable 2009 Sorority Row – itself a remake – and was in the mood for more, so I punched in the code to rent Black Christmas.

Tis the last day of the semester before the winter break at Hawthorne College, a plot device which serves to inform us that, come tomorrow, the campus will be emptying out with only a handful of lingering students remaining behind. Black Christmas does not screw around, kicking the proceedings off with an old school stalk-and-kill sequence that is fairly effective. We meet the modern sisters of the MKE sorority including Riley (Imogen Poots, in a strong performance.) Riley is our kindhearted heroine with a tragic past in that she was drugged and then assaulted by a fraternity asshole a year or so previous; at least that is Riley’s story, which is one that not everyone believes. 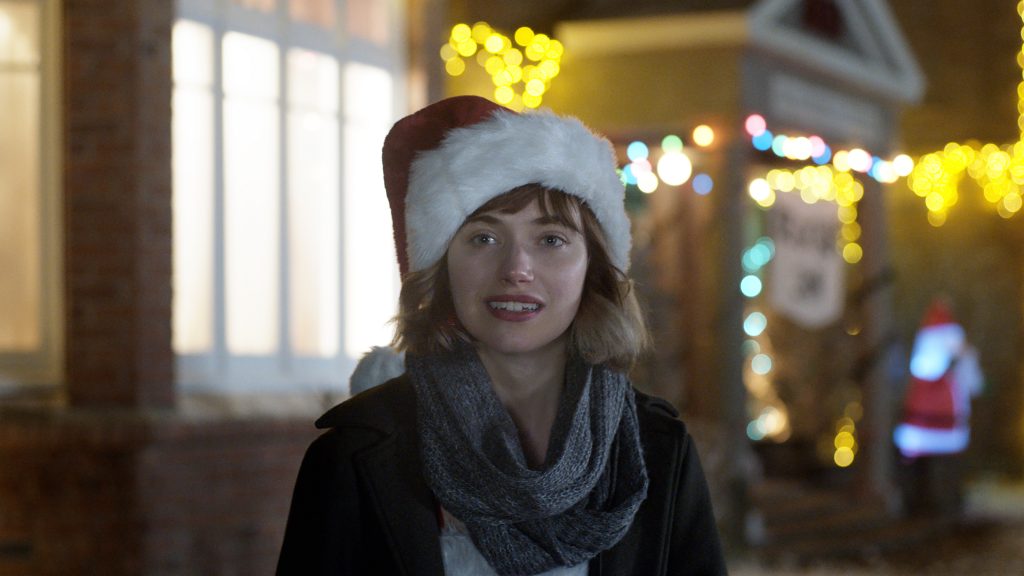 Imogen Poots as “Riley”, representing the modern-day incarnation of a Scream Queen

The always welcome Cary Elwes, representing the very definition of graceful aging, appears as a professor of classic literature with his own side story: a petition is being circled – by one of the MKE sisters – to have the professor fired, or at least censured, for his misogynist teachings although he claims to be following the required curriculum. Even though it has not been a long time in human years since The Doctor’s own matriculation, I have no idea what the temperature is like on today’s college campuses and therefore cannot speak to the reality of this climate. This version of Black Christmas was just released during the 2019 holiday season and one does not have to be a certified brain wizard to recognize the overtly feminist message. In fact, the viewer is hit over the head with it. I must be careful what I say in this regard because merely scratching your nose the wrong way in 2020 can get a person labeled as an insensitive hater… but I couldn’t shake the feeling that this movie insinuates that any heterosexual male who likes to drink beer is inherently guilty of something.

Am I allowed to say that these skimpy Santa outfits are kinda sexy? Oops now I’m in trouble, aren’t I?

This is not uninteresting – in fact, nothing about this version of Black Christmas is uninteresting – but it takes away from the horror narrative, which is somewhat troubling when you are one-third into a slasher movie with a 92 minute running time and our killer has virtually disappeared. Rest assured, however, that our black-clad slasher is still hunting down the ladies of MKE in a series of tight, suspenseful scenes. Black Christmas is shot by someone who is familiar with what fans of the genre want, maintaining an ominous aura throughout, but unfortunately the PG-13 rating serves to somewhat hamstring the effort. 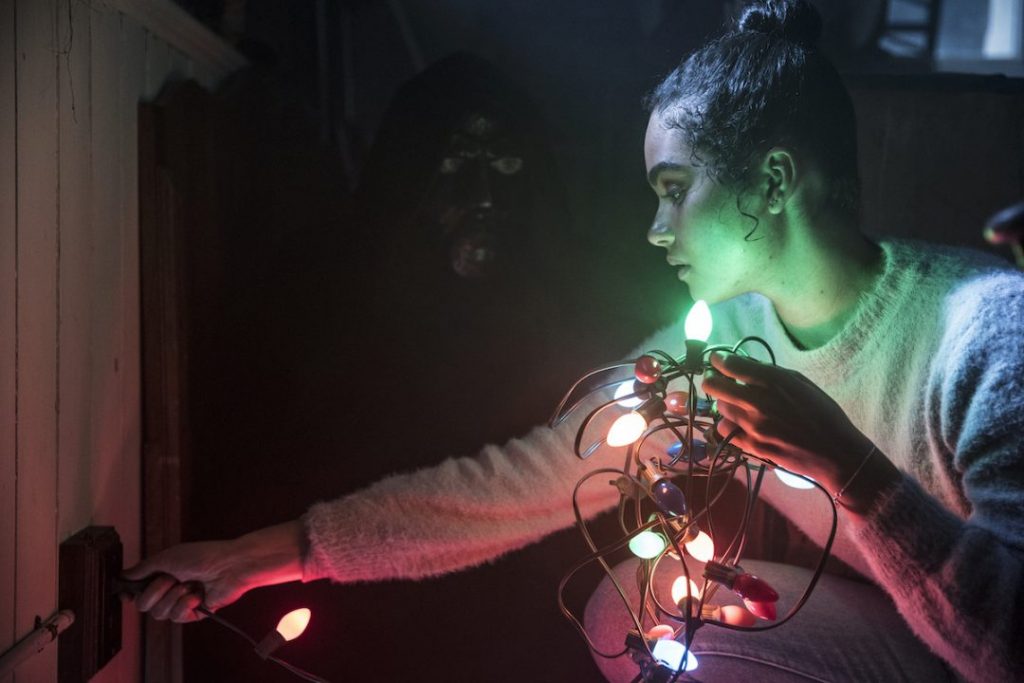 A tense scene from Black Christmas. This film thankfully does not rely on the “jump scare” tactics…

This is a modern movie in more ways than one. Back when Scream was released in 1996, the killer made threatening phone calls while employing a voice-disguiser; in the new land of ubiquitous smart devices that is 2019, the killer sends threatening direct-messages (or DMs) from an anonymous account. I have mentioned in other reviews that the present day writers/directors of horror have no choice but to account for the intrusive hands of technology in all of our lives, and Black Christmas addresses this in what must now be the regular fashion. 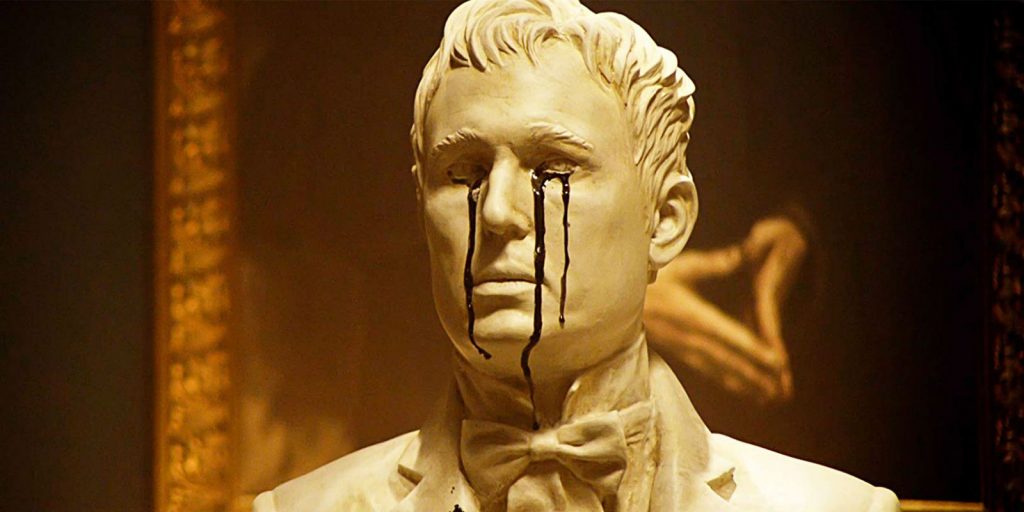 This becomes integral to the plot… form your own opinion

Normally I prefer not to discuss a movie’s final third at the risk of revealing spoilers, but in the case of Black Christmas it bears mentioning. For the first hour the film is well acted, choreographed, and paced. Sans the chaste rating, Black Christmas has all the makings of a classic slasher horror film, when suddenly… the proceedings take a rather sharp turn. I certainly have no problems whatsoever with deviating from the norm but things were going along just fine, thank you very much. The introduction of a supernatural black magic element and a Stepford Wives theme takes the movie very much in a different direction. The individual viewer will have to decide if this was worthwhile or not. In my opinion the tonal change was unnecessary, if not misguided and ridiculous. Black Christmas is an interesting movie and worth watching. I think most horror fans will agree with me that it could have really been something special that ultimately failed, but others may appreciate the shift in direction. At the very least, this movie has the potential to lead to some discussion amongst friends. As always, now more than ever, The Doctor wishes you all a clean bill of health. 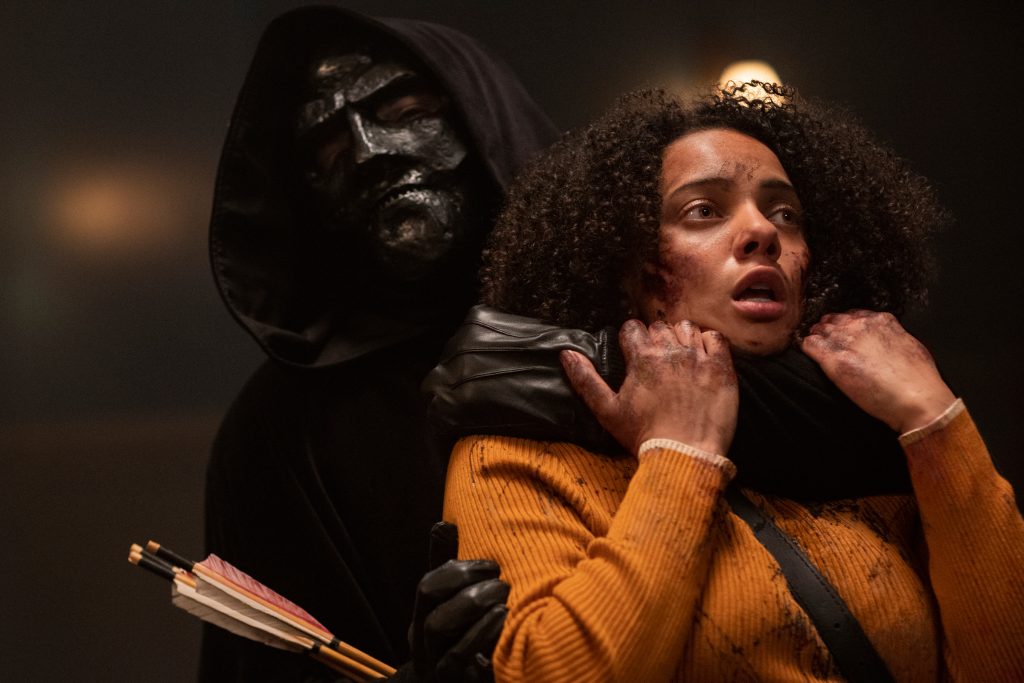 * Blumhouse can be hit-or-miss for me, but that is a complement considering the breadth of the body of work. I am a huge fan of The Purge franchise and the first Sinister film but not as enthusiastic about the Paranormal Activity and Insidious franchises. I thoroughly enjoyed Get Out, but unlike many others, I did not think that it reinvented the circular wheel or the sliced loaf of bread. I’m still straddling the damned fence on the last Halloween movie. Those are just some personal snippets. On the whole, Jason Blum is producing entertaining movies that vary in scope and tone, and for that he should be commended.