“A deaf writer who retreated into the woods to live a solitary life must fight for her life in silence when a masked killer appears at her window.” As...

“A deaf writer who retreated into the woods to live a solitary life must fight for her life in silence when a masked killer appears at her window.”

As far as imparting tone and information, that is about as good as it gets for a one sentence synopsis. In fact, when I first read it I was tempted to say the hell with the review. I wasn’t in the best of moods, having just had a heated argument with a clerk at my local package store. The conversation was about whiskey and it started benignly enough, but when the ruddy-faced jackanapes behind the counter suggested that The Doctor was unfamiliar with the finer points of casking as well as the metric system, well… I extricated myself from the scene and came home where a Rocky Patel 1990 cigar and a glass of Woodford Reserve worked as calming agents.

It would be easy to call Hush a “taut, cat-and-mouse thriller” but that sounds like something that a hackneyed slob who actually does this for a living might write, so I will refrain. Our protagonist is Maddie (the attractive and heretofore unknown Kate Siegel) a woman of maybe thirty years old who lives by herself in an isolated home in a wooded area that is definitely off the beaten path. Maddie has a friend and neighbor who visits her in the beginning, but she doesn’t actually live next door. The filmmakers use the scenery to let us know that we are definitely on our own out here. That in itself, although not original, would make for an interesting premise but the story here goes a step further: Maddie, as it turns out, is stone deaf, having lost her hearing due to an adolescent illness.

Maddie’s deafness doesn’t make her character weak in any way. Living out in the woods so that she can write peacefully is her choice, and in Siegel’s hands she definitely makes for a mentally tough chick. Still, what happens when a guy in a white mask and armed with sharp weapons shows up at her door?

Kate Siegel delivers a gritty and engaging performance as Maddie in “Hush”.

The subgenre of Hush is what I would term “isolated home invasion horror.” See The Strangers or You’re Next for the best recent examples of this theme at work. Along comes a masked killer, without rhyme or reason, to terrorize Maddie as she hides in her darkened house. He communicates that he can come in any time that he wants and of course he is telling the truth. The attacker can break a window whenever whimsy strikes him, and although Maddie’s other heightened senses might allow her to feel a vibration, it is unlikely that she would know if a window was shattered on the second floor or the garage, etc. Maddie’s house itself is a perfect character in Hush. Two stories with many windows and sliding glass doors that both serve as possible entrances for the killer and vantage points from where Maddie can observe him as he circles and stalks.

I also very much appreciate that the villain in Hush is just a man, nothing more. I enjoy a good supernatural yarn myself, but I fear that we have been hit over the head with them in the past several years. There are no evil spirits in Hush, no women in black, no possessed children’s dolls, just a man who is bent on murder and mayhem. In my mind at least, this is far scarier than ghosts and goblins. 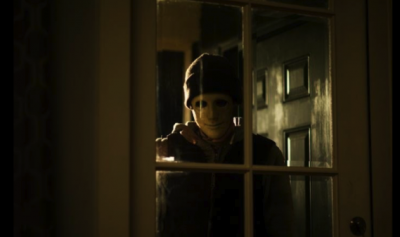 If you see this guy at your door, don’t shoot! It might just be The Doctor making a house call.

The Doctor once temporarily lost his hearing. I recall, somewhat surprisingly I might add, that my thankfully brief deafness occurred during the salad days of my college experience and was the result of a self-administered undergrad Biology examination that had involved a plastic squeeze bottle of McCormick’s brand vodka and the Iron Maiden classic CD The Number of the Beast. It was discombobulating, but suffice it to say that my hearing returned. 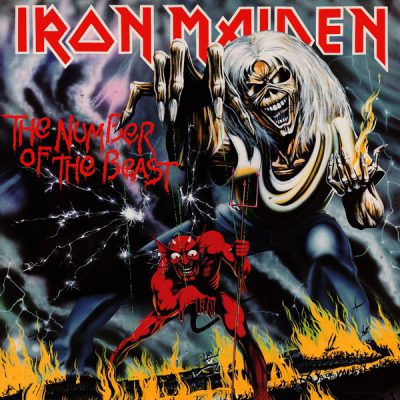 It’s Eddie! Don’t mix with any sort of booze that comes in a squeeze bottle.

At a tight eighty-one minutes, Hush doesn’t screw around. The tension meter is ratcheted up from the early stages and doesn’t let us rest. It has long been my opinion that any horror or suspense film that is worth its weight in sea salt will force the viewer to ask him or herself the question of “What would I do?” A good film, and Hush is a good one, will suck the viewer into its world and its quandary and make you ponder these questions and play out the scenarios in your mind. What if I were in this situation? How would I react? 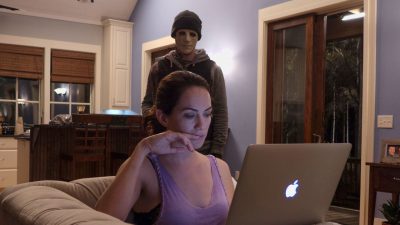 Definitely give Hush a try, preferably on a Saturday night with a bowl of buttery popcorn and a tall glass of your favorite soda which you can spike with brown liquor at your discretion. And think about what you would do if you were sitting on the couch in your isolated lake house and looked up to see a masked whacko at the door. I know what The Doctor would do. I’d make a strong drink, crank up the Maiden, unlock the door and tell the sumbitch to come and get some. Ahh, who am I kidding, I’d run into the nearest closet and cry for my mommy. As always, The Doctor wishes you all a clean bill of health. 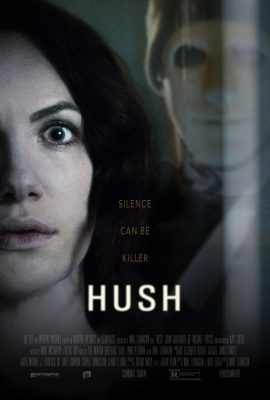