Getting old sucks, but it beats the fucking alternative... 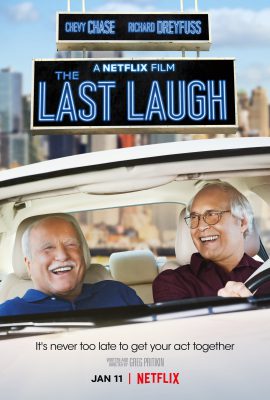 Before I commence a brief dissertation on the recent Netflix release The Last Laugh starring the now-septuagenarians Chevy Chase and Richard Dreyfuss, I would like to take a moment to reflect upon a portion of the Chase filmography. In the glorious, inimitable decade known as the 1980’s, Chevy Chase starred in the following movies, among others, between the ages of roughly thirty-six and forty-six:

Ponder that list for a minute or two. My God. If a Movie Actor Hall of Fame existed, Chase would have his own velvet-roped wing of gilded statues. Caddyshack, three Vacation movies, both Fletch masterpieces… as well as Spies Like Us, Three Amigos, and the grossly underrated Funny Farm to boot? Ay Caramba, it’s like looking at the daunting yearly home run totals of Barry Bonds from age thirty-two onward: 40, 37, 34, 49, 73, 46, 45, 45… forget what transpired before or after, Chase’s 1980’s body of work is breathtakingly brilliant, expansive, and deserving of the grandest of acknowledgments. 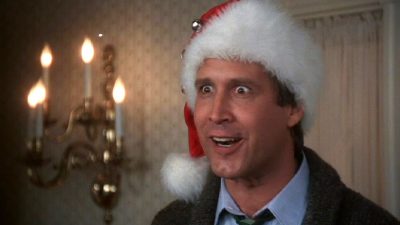 Chevy Chase on top of the world. In The Doctor’s scientific opinion, Christmas Vacation is the greatest Christmas movie of all time, the hell with It’s a Wonderful Life…

I could write an endless, meandering essay about any one of those films, but lucky for you I haven’t had much to drink today… yet. Anyway, you get the point. The fact that all these movies still hold up today, and that Clark Griswold and Irwin Fletcher remain two of the greatest comedic characters in movie history, is nothing short of an amazing, otherworldly accomplishment.* It needed to be said, and your favorite Doctor was just the man to say it. Now let’s get into The Last Laugh, shall we?

Al Hart (Chase, emerging spry and much more fit than he was a few years previous) is a former big-time talent manager, comfortably wealthy but now widowed and well into his seventies with a career that has basically wound down. Even though he is mostly hearty and hale, Al occasionally trips and bumps his head, which concerns his kind granddaughter Jeannie (Kate Micucci) enough that she wants him to consider checking into the congenial Los Angeles retirement community of Palm Sunshine. While visiting the Palm Sunshine grounds with Jeannie, Al runs into old friend Buddy Green (Richard Dreyfuss.) Buddy was Al’s first ever client fifty years ago, a once promising stand-up comic who gave up the business right on the cusp of the bigtime to become a successful podiatrist and family man. Having a familiar face and potential friend at Palm Sunshine helps to sway Al’s decision, although this exchange probably didn’t hurt:

Chase is still possessed of a comedic timing and wide range of facial expressions, and his confusion and trepidation at the world he lives in mirrors my own. One of the major and obvious themes of The Last Laugh is a heartfelt meditation on aging. This could be depressing, and I suppose it is if you dwell on it for too long. Dreyfuss is now long removed from hunting sharks with Robert Shaw and Roy Scheider (aren’t we fucking all) but he matches Chase in energy and pathos.** 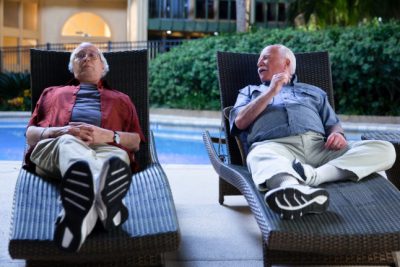 Chevy Chase and Richard Dreyfuss enjoying a moment of repose in The Last Laugh.

Both in the film and in their real lives, these two are fully aware that they are no longer gallivanting about in their salad days. One cannot help but ponder the inevitably of eventually growing old, because we are all heading there, God willing. To borrow a phrase from senior citizens that I know both personally and professionally “Doc, getting old sucks, but it beats the fucking alternative.” Amen. I imagine that each person copes with the aging process in his or her own way, and that is certainly true of Al and Buddy.

Al: I’m not there yet, Buddy.
Buddy: It’s a new season. Embrace it.

Al, however, isn’t ready to embrace it, and he notices while hanging around the poolside table with Buddy and his cronies that Buddy is still funny, a wizard of one-liners and jokes. Ever the career man, Al attempts to talk Buddy into doing a series of stand-up gigs. Buddy is uncomfortable with this idea, content as he is in this “new season” and disinclined to run off on a wild jaunt with Al. Then his retirement community girlfriend suddenly dies, leading Buddy to second thoughts… 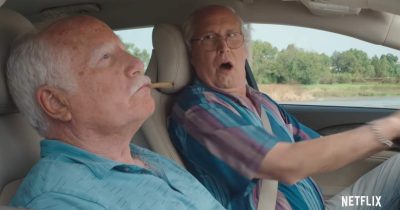 These two have still got it!

Eventually the men hit the road with Buddy performing in a series of small clubs, during which time Al is attempting to use his show business connections to see if it would be possible to inexplicably land Buddy a gig on Late Night with Jimmy Fallon. After some initial nervousness, Buddy kills it in the dive bars and clubs, doing his best when just responding to the audience rather than working from scripted material, although he does bomb at a show in Texas (apparently whoever wrote The Last Laugh thinks that we denizens of the Lone Star State are a bunch of uppity, humorless dolts. He must not be familiar with the Tuesday Night Cigar Club!) 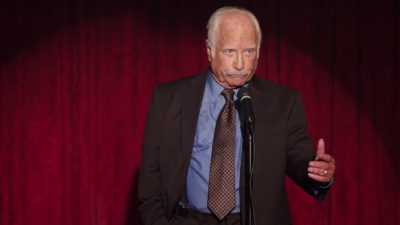 Richard Dreyfuss takes the stage as “Buddy Green” in The Last Laugh.

On its way towards being a sometimes-funny, elegiac rumination on life, love, and friendship, The Last Laugh veers off the tracks somewhat during its second half. The still lovely and svelte Andie MacDowell shows up as a free-spirited pot smoker and potential love interest for Chase and implausibly joins the road trip. The melodrama begins to lurch towards cheesiness, although it is ameliorated (slightly) in an extended and extremely strange scene where Chase trips balls after ingesting too many illegal narcotics. It almost feels as if the filmmakers weren’t comfortable with a straightforward, linear tale and needed to inject, well, something, when things might have been fine if they had left well enough alone.

Will you have as much fun watching the film as these three had making it? I’m afraid it’s far too early to tell…

Thankfully the train re-finds the tracks for the denouement of The Last Laugh. This movie could have been good, but unfortunately it misses that boat. Chase and Dreyfuss, however, are worth the time. Chase plays more of a straight yin to Dreyfuss’s yang, which is an interesting turn of events given their respective careers. Chase may not be willing – or able – to take the pratfalls of years past, but his performance of Al is warm and sincere, and Dreyfuss displays a definite charisma as Buddy, a comfortably aging man who knows his limits but can still engage in shenanigans. Both appear to have fuel left in their respective tanks. The Last Laugh doesn’t swing and miss so much as it takes a healthy hack that is driven deep for a long out on the warning track… and we know that The Doctor’s use of baseball metaphors means that spring training isn’t far off. This movie is probably only going to be enjoyed by people of a certain age who admire the careers of Chevy Chase and Richard Dreyfuss and might be lost on millennials. Is it possible, at this moment in his autumn years, that Chase could deliver a performance as a now-retired Irwin Fletcher who gets involved in one final investigative journalism mystery? Nah, I love Chase, but l think we should leave Fletch as he is. As always, my friends, The Doctor wishes you all a clean bill of health. 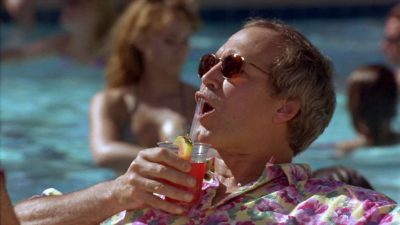 * Chevy Chase obviously didn’t disappear (like so many others) after the eighties ended. After that run, it was practically inevitable to experience a drop off as he moved past fifty. For The Doctor, Chase’s best post-eighties roles were of course his return as Clark Griswold in 1997’s Vegas Vacation and his very funny turn in a supporting role in 2010’s underappreciated Hot Tub Time Machine. Please reread the list of his 1980’s staples from above once more. As Sean Bean states in the opening narration for the movie Troy “Men are haunted by the vastness of eternity.” Chevy Chase doesn’t have to be, for he certainly created a legacy.

** As of this writing, Richard Dreyfuss has 121 credits according to IMDB. He has received multiple Academy Award nominations. Like Chase, his legacy as an actor is secure. But let’s be honest, his legacy was secured before he was thirty years old when he starred alongside Shaw, Scheider and “Bruce” the shark in Jaws, one of the greatest motion pictures of all time.